Dalia Youssef, an Egyptian lawmaker, praised U.S. election observers this week. In 2011, she called the protests in Tahrir Square a CIA plot. 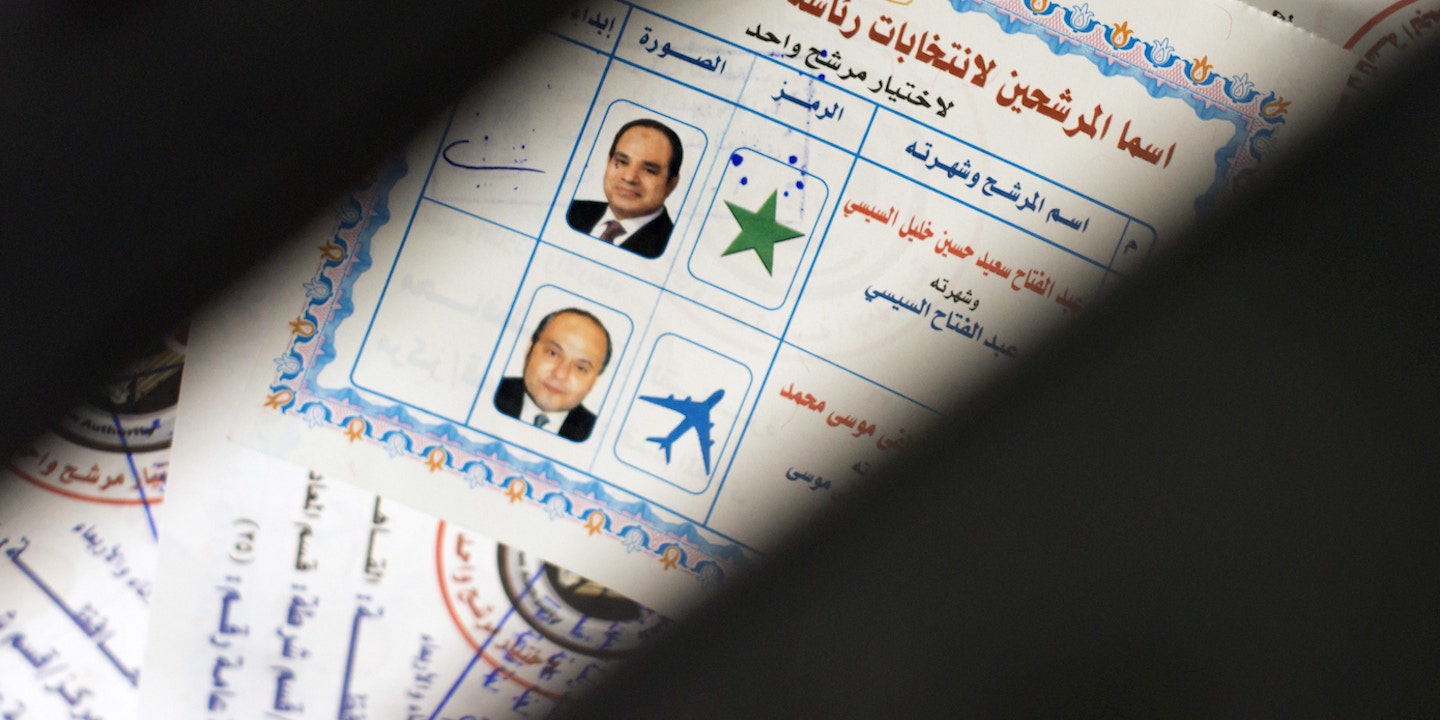 Having been threatened with fines of nearly $30 for failing to vote, Egyptians went to the polls this week to cast ballots in a presidential election entirely lacking in suspense, since the incumbent, President Abdel Fattah el-Sisi, was essentially unopposed.

The only other candidate in the race, Moussa Mostapha Moussa, was an avowed supporter of Sisi. After his name was placed on the ballot at the last moment — apparently to give the election a veneer of legitimacy — Moussa’s Facebook page had to be hurriedly scrubbed of images promoting the president.

The facebook page of Moussa Mostafa Moussa, who reportedly intends to run against Sisi in the election. No this is not a joke. pic.twitter.com/eEGrJaHqf4

“Every serious candidate was forced out of the race, either through intimidation, detention or arrest,” Timothy Kaldas, a fellow at the Tahrir Institute for Middle East Policy, observed in a Twitter commentary. “The vote in Egypt was rigged before a single vote was cast.”

The vote in Egypt was rigged before a single vote was cast. Indeed, procedurally everything can go perfectly and it won't change the fact that the vote was rigged. Every serious candidate was forced out of the race, either through intimidation, detention or arrest.

Kaldas added that it would be more accurate to call what’s happening across Egypt this week more of a publicity stunt than an election. “There is no election for Sisi to win,” Kaldas concluded. “He simply continues to rule.”

Rather than stuff ballot boxes the Egyptian state has rigged the entire context in which this fraudulent election is taking place. That is vote rigging in its own way and it renders this so called election a fraud. There is no election for Sisi to win. He simply continues to rule

Despite the obvious and fundamental flaws in an election with only one possible winner, a group of observers from the United States pronounced themselves deeply impressed by the enthusiasm they witnessed at polling places they visited.

One of the observers swept up in the election day pageantry was Andy Braner, an author of Christian self-help books who secured a fellowship on Middle East affairs in the office of Nebraska Rep. Jeff Fortenberry.

Amazed at the professionalism during #EgyptElections2018. 25 polling stations: consistent, helpful for handicapped and elderly, very patriotic. @SashaToperich and I continue to monitor. #Egypt_Elections_2018 pic.twitter.com/AfNJHI02Xo

As Guardian contributor Ruth Michaelson pointed out to Braner, though, observers from Tunisia and Greece were underwhelmed, reporting a lack of privacy in polling places that made it impossible to cast secret ballots.

Concerns that Braner and his colleague, Sasha Toperich, a fellow at Johns Hopkins School of Advanced International Studies in Washington, might have let themselves be used in the publicity stunt were heightened when an Egyptian television crew broadcast images of them dancing with locals at a polling place in Menoufia, a province in northern Egypt.

So happy to join dancing w/ people in #Egypt when taking break from observing election polls. A ceremony ad-hoc organized in honor of friendship of #American & #Egyptian friendship @braner pic.twitter.com/f6eMSgPa7P

Such scenes of celebration are a staple of pro-Sisi propaganda on state-controlled channels. The Cairene newspaper Al-Masry Al-Youm reported that the observers were also treated to a banquet by Dalia Youssef, a member of Egypt’s parliament who accompanied the Americans on their visits to four polling stations.

A more critical look at the American delegation from the website Al Manassa noted that Toperich appeared to be far from an impartial observer. Last September, he wrote a glowing review of Sisi’s speech to the United Nations General Assembly for The Hill. Toperich, who began his article by mentioning that he had watched Sisi speak while sitting with Youssef, argued that “the address served to reassert Sisi’s leadership on the global stage” and showed that, under his leadership, “Egypt is moving in the right direction.”

Youssef, who was described by Toperich as a “good friend,” apparently arranged the tour of polling places for the observers.

Many thanks to MP @DailaYoussef for inviting the amazing @SashaToperich and @braner to monitor #EgyptElection2018 and interact with Egyptians in rural areas.

After the footage of the men dancing circulated online, Youssef was full of praise for the American observers, suggesting that their role was more about demonstrating support for Egypt than casting a cold eye on the electoral proceedings.

Friendship between Egyptians and Americans goes back a long long way, but has taken a few bumps along the way... thank Andy @braner and @SashaToperich for your keenness to revive it.

Youssef, who visited Washington last year as part of an Egyptian parliamentary delegation, has not always been so positive about Americans in her public comments.

In 2011, six months after massive demonstrations in Cairo’s Tahrir Square toppled President Hosni Mubarak, Youssef promoted a conspiracy theory that the protest movement had been a secret plot by the American and Israeli intelligence services, the CIA and the Mossad.

Check this video out -- Egypt protests organized by Mossad and the CIA http://t.co/L0FWzKz via @youtube

The video Youssef shared on Twitter has subsequently been removed from YouTube, but it was circulating during the first days of the Tahrir sit-in that began on Jan. 25, 2011. The video was cited at the time by conspiratorial bloggers who claimed that prior U.S. support for pro-democracy activists in Egypt, documented in a leaked State Department cable published by WikiLeaks, was evidence that the protesters were part of a C.I.A. plot to topple Mubarak.

Two years later, after Egypt’s first freely elected president, Mohamed Morsi, had been deposed by Sisi, then an army field marshal, Youssef celebrated the military coup as a blow against what she called “the US-Israeli coalition.”

Now that the US-Israeli coalition lost a battle & the Egyptian people & army forced a disruption in plans..what's next in their deep pocket?

Another member of the American delegation observing the election, Samantha Nerove, was also filmed dancing outside a polling place in Giza, near the pyramids.

Hello from Cairo! I'm here as an election observer for the pres. election. Citizens of all ages have expressed pride & joy for the ability to vote freely. Just like our focus @USAMattersNow - democracy is not about party/politics, it’s about voting one’s conscience w/o coercion. pic.twitter.com/TTtv5aJdAA

Nerove, who retired from the U.S. Army as a lieutenant colonel in 2013, now leads an advocacy group, America Matters, that is broadly supportive of the Trump administration. A major focus of her work is to campaign against female genital mutilation. Nerove’s YouTube channel features a documentary on the practice — still common in some conservative Muslim-majority nations, like Egypt — that was produced by the Clarion Project.

Clarion is a New York-based advocacy group that, in its own words, “educates the public about the dangers of radical Islam.” As the New York Times reported in 2012, Clarion’s films are deeply offensive to Muslims. The group has been advised by Frank Gaffney, who served in the Reagan administration and now leads the effort to block what he calls the Muslim Brotherhood’s secret plot to impose Islamic Shariah law on Americans. Clarion has received donations from the casino magnate Sheldon Adelson, a major supporter of Israel, and “shares officials with Aish HaTorah, an Israeli organization whose officials have opposed a full return of the West Bank to Palestinians.”

After this post was published, Dalia Youssef argued on Twitter that she had been “an active participant” in the 2011 revolution, but did not respond to questions about why she helped spread the conspiracy theory that the protest movement was part of a C.I.A. plot. She also argued that her Twitter commentary in 2013, in which she called the coup led by General Abdel Fattah el-Sisi to depose the elected President Mohamed Morsi a blow to American and Israeli plans for Egypt, was a reference to “the Obama Administration’s support of political Islam.”

As I reported in 2012 for The New York Times, many Egyptians who opposed the erratic rule of President Morsi, a former leader of the Muslim Brotherhood, had at the time embraced a conspiracy theory first promoted by American conservatives like Michele Bachmann and Frank Gaffney, who claimed, without evidence, that the Obama administration had plotted to install the Islamist party’s presidential candidate in office.

Preliminary results published by state-run media in Egypt showed that President Sisi got more than 90 percent of the vote, with more ballots spoiled in protest than going to his nominal challenger.

Turnout, however, was far less than 50 percent, suggesting that even the threat of fines had failed to convince most voters to take part in the pageant.

Ballots in the Egyptian presidential election featured the names and photographs of just two candidates: the incumbent, President Abdel Fattah el-Sisi, at top, and Moussa Mostafa Moussa, one of his supporters.