With Latest Syria Threats, Trump Continues to Be More Confrontational Toward Russia Than Obama Was

As usual, the prevailing narrative in official Washington and its media organs is the exact opposite of reality. The civil war in Syria began in 2011 and escalated for five years during the Obama presidency, yet Barack Obama — despite demands from leaders of both parties and think tanks across the spectrum — never once bombed Syrian government targets. Although the CIA under Obama spent $1 billion per year to covertly train and fund Bashar al-Assad’s enemies, it was never close to enough to topple him: just enough to keep the war going.

But Obama never bombed Assad or his military assets: a decision which, to this day, is scorned across official Washington. Hillary Clinton blasted Obama’s refusal to do more to stop Assad, and in 2017, she actively encouraged Donald Trump to bomb Assad and take out his air force.

To this day, Obama regards his refusal to bomb Assad as one of his best moments; about this, Obama told The Atlantic in 2016: “I’m very proud of this moment.” He made the decision because he “was tired of watching Washington unthinkingly drift toward war in Muslim countries” and because he was wary of military confrontation with a regime that is “sponsored by two large states”: Russia and Iran.

Indeed, not only did Obama refuse to risk military confrontation with Russia in Syria, he sought in 2016 — after Russia annexed Ukraine — to form a military partnership with Vladimir Putin to bomb agreed-to targets in Syria: In contrast to Obama’s efforts to avoid confrontation with Russia, his successor has been far more belligerent — not only in Syria, but elsewhere. In April of last year, Trump ordered the bombing of a Syrian military airfield near Homs; though it was quite limited, it was intended to send a message to Assad and Putin — and it was more than Obama was willing to do.

Over the past several days, Trump has made very clear that he intends to order another bombing campaign against Assad. After an alleged chemical attack by Assad, Trump declared on Twitter that “President Putin, Russia and Iran are responsible for backing Animal Assad,” and warned that there would be a “Big price” to pay for this. All of the signals over the past 48 hours — including the cancellation of long-planned trips by Trump and his top national security officials — have made clear that Trump is planning another bombing assault against Assad.

This morning, Trump explicitly promised that missiles were on the way. For good measure, he mocked Russian promises to intercept those missiles and boasted that they would be unable to stop his bombing campaign:

Russia vows to shoot down any and all missiles fired at Syria. Get ready Russia, because they will be coming, nice and new and “smart!” You shouldn’t be partners with a Gas Killing Animal who kills his people and enjoys it!

The exact danger Obama sought to avoid — military confrontation with Russia in Syria — is now upon us, being directly threatened by Trump. And Democrats — who spent years first scorning Obama for not becoming more militarily involved in Syria and then pushing Trump to be more hostile to Moscow — are, just as Clinton last year did, defending Trump’s military aggression.

This morning on CNN, former Secretary of State Madeleine Albright — who spent 2012 mocking Mitt Romney as an archaic Cold Warrior for warning that Putin posed a grave threat to the U.S. — praised Trump’s tweets: “I agree with President Trump and his description of Putin,” she said, adding: “At least the President has recognized that Putin is not a friend.” She then demanded that a “strategy of some kind” is needed for this new bombing campaign, worrying that one has not yet been formulated:

Former Secretary of State Madeleine Albright commends President Trump for recognizing that "Putin is not a friend," but says the US needs a strategy for Syria: "As far as I can tell, there is no strategy" pic.twitter.com/I1DUGX8m29

It is a common refrain among Trump’s Democratic critics that he is Putin’s “puppet.” Because the Russian government preferred him in the 2016 presidential election and has compromising information to hold over his head, so the prevailing narrative goes, Trump is predisposed toward, perhaps even captive to, Moscow’s point of view — and thus, enacts policies demanded by the Kremlin to benefit the Russians at the expense of the U.S. 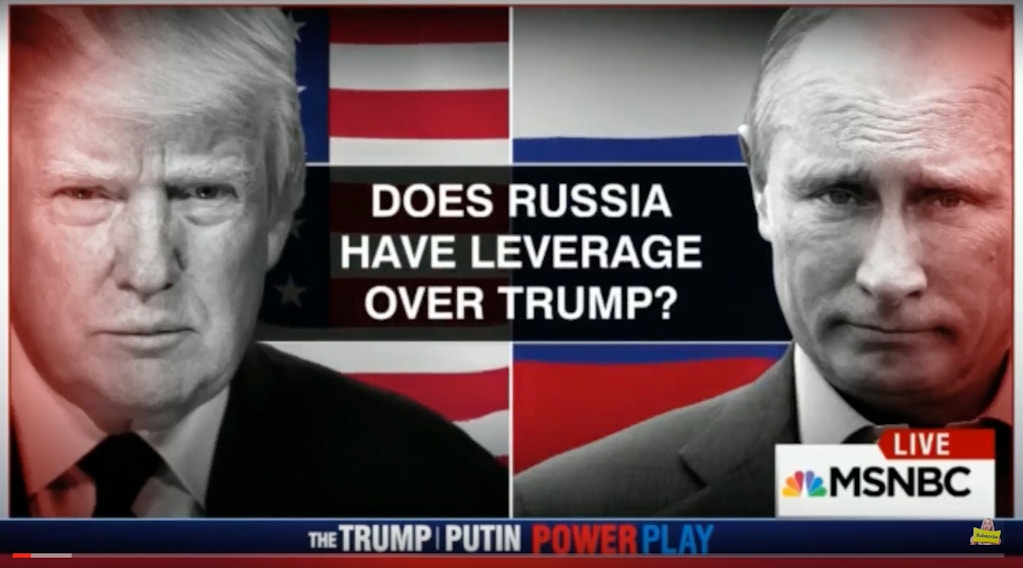 Yet far beyond Trump’s hostile posture toward Russia’s client state led by Assad, the reality is the exact opposite: The Trump administration has been more belligerent, and more confrontational, toward Moscow than the Obama administration was.

After Trump ordered what the Washington Post correctly described as “the largest expulsion of Russian spies and diplomats in U.S. history,” the paper acknowledged an uncomfortable, narrative-busting truth:

Despite Trump’s reliably warm rhetoric toward Moscow and his steadfast reluctance to criticize Russian President Vladimir Putin, the Trump administration has at times taken aggressive action against Russia at the recommendation of the president’s top aides.

This assessment has ample support — beyond the bombing of Assad and the record expulsion of Russian diplomats:

Arming Ukraine: For years, the Obama administration refused to send lethal arms to Ukraine despite bipartisan demand that he do so. Proponents of arming Ukraine argued that doing so would be a way to push back against Russia after the annexation of Crimea. Opponents, including Obama, believed that sending lethal arms would lead to an escalation of the conflict and needlessly antagonize Russia. As The Atlantic put it after its widely touted interview with Obama: “Obama’s theory here is simple: Ukraine is a core Russian interest but not an American one.”

By stark contrast, the Trump administration last December approved a lethal arms transfers, including anti-tank weapons. The Russian government was not pleased. “Washington is trying to present itself as a mediator,” Deputy Foreign Minister Sergei Ryabkov said. “It is not a mediator at all, it is an accomplice in fomenting a war.”

Appointing an Anti-Russia Hawk as U.N. Ambassador: The Trump administration’s U.N. Ambassador Nikki Haley has made opposition to Russian foreign policy a cornerstone of her tenure at Turtle Bay. In mid-March, she urged aggressive action after the Salisbury attack, even warning that the Russians may soon pull off similar operations within the United States.

“If we don’t take immediate concrete measures to address this now, Salisbury will not be the last place we see chemical weapons used,” she said at the U.N. “They could be used here in New York, or in cities of any country that sits on this council. This is a defining moment.”

Nominating an Anti-Russia Hawk as CIA Director and Secretary of State: During the Obama years, one of the loudest anti-Russian voices in Congress was GOP Rep. Mike Pompeo, repeatedly warning — at a time when Obama was accommodating Putin and seeking to cooperate with him — that Putin was a grave danger to the U.S. Once Trump appointed Pompeo as CIA director and now secretary of state, Pompeo continued to speak in belligerent and hawkish tones about Russia, warning that it poses a serious threat to U.S. interests.

Antagonizing Russia’s Iranian Allies: The Trump administration has been harshly critical of engagement with Iran, which is a close ally of Russia. Last August, Trump signed into law new sanctions toward Iran that were opposed by Vermont Independent Bernie Sanders because he believed these new sanctions could upset the Iran nuclear deal. It is also rumored that the administration may pull out of the Iran deal altogether in May. By contrast, Obama worked directly with Putin to forge a peace agreement with the Iranians. Appointing a National Security Adviser Who Is Hostile to Russia: Although Russia critics have seized on a curious 2013 John Bolton video, in which he promoted looser gun laws in the country as evidence of Bolton-Russia ties, the former George W. Bush U.N. ambassador has in the recent past evinced quite hawkish views toward Russia policy. Bolton doesn’t mince words about what he thinks about Russian cyberoperations in 2016. Writing that “attempting to undermine America’s constitution is far more than just a quotidian covert operation. It is in fact a casus belli, a true act of war, and one Washington will never tolerate.” He also frequently advocates for bombing Iran, Russia’s ally.

Sanctioning Russian Oligarchs Close to Putin: In a move this week that NBC News called “a black Monday for Russian oligarchs,” Trump announced “sweeping sanctions against members of Russian President Vladimir Putin’s inner circle,” causing the ruble to tumble. Specifically, “the Treasury Department, in connection with the State Department, targeted seven Russian oligarchs and 12 companies they own or control. It also issued sanctions on 17 senior government officials, along with a state-owned weapons trading company and its subsidiary, a Russian bank.”

It’s certainly true that Trump — like Obama before him — has repeatedly expressed a desire to work with Putin and Russia on perceived common interests. Just today, after threatening Putin, Trump lamented that “our relationship with Russia is worse now than it has ever been, and that includes the Cold War.” He added, echoing what was once standard orthodoxy among American liberals for decades during the Cold War: “There is no reason for this. Russia needs us to help with their economy, something that would be very easy to do, and we need all nations to work together. Stop the arms race?

It’s also true that Trump has made his fair share of positive remarks about Putin and, until recently, had refrained from criticizing him. But that’s part of a larger pattern in which Trump has spoken only positively about the Philippines’s Rodrigo Duterte, Egypt’s Abdel Fattah el-Sisi, Saudi despots, and Israel’s Benjamin Netanyahu. Trump — like most American presidents — has an affinity for authoritarian rulers in general who are allied with the U.S.: a long-standing tactic that is by no means unique to Russia or to Trump.

But whatever else is true, Trump — notwithstanding the prevailing Democratic Party and media narrative over the last 18 months — has been far more willing to confront Russia and defy Putin than Obama ever was. While that may make think tank militarists, the defense industry, and warmongers in both parties giddy, it is extremely dangerous for the world.

What makes this all the more dangerous is that Democrats, both because of ideology and political maneuvering, have painted themselves into a corner where they cannot possibly provide any meaningful, credible opposition to Trump’s increasingly dangerous path regarding Syria and Russia.