Whether or not the Syrian leader used chemical weapons in Douma or Khan Sheikhoun, he is still a monster for torture, bombing, and much else. 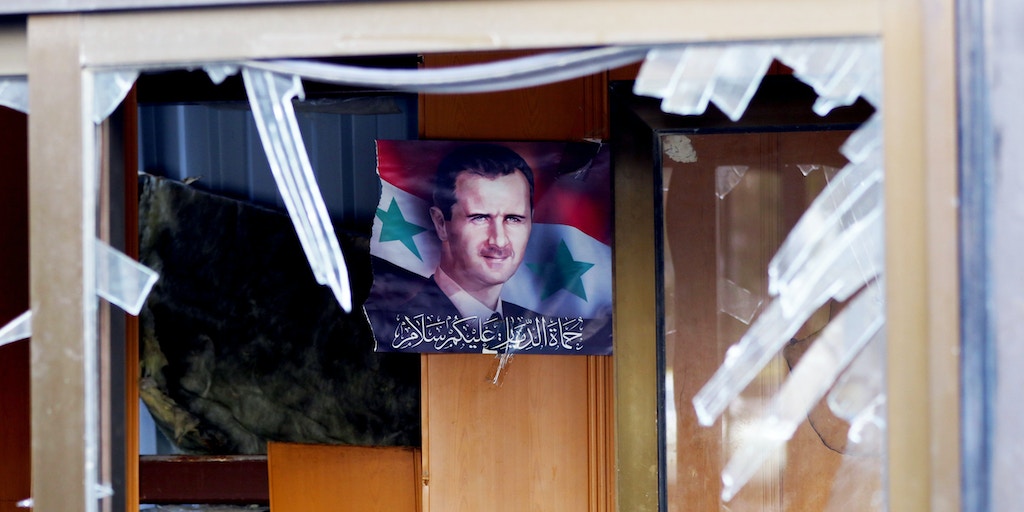 A portrait of Syrian President Bashar al-Assad is visible through a broken window next to the site of a suicide attack in the Masaken Barzeh district of the capital Damascus, on Feb. 9, 2016.

Sorry to interrupt: I know you’re very busy right now trying to convince yourselves, and the rest of us, that your hero couldn’t possibly have used chemical weapons to kill up to 70 people in rebel-held Douma on April 7. Maybe Robert Fisk’s mysterious doctor has it right — and maybe the hundreds of survivors and eyewitnesses to the attack are all “crisis actors.”

Maybe Assad didn’t use sarin to kill around 100 people in rebel-held Khan Sheikhoun a year ago either. A joint investigation by the United Nations and the Organization for the Prohibition of Chemical Weapons found “unmistakable evidence” that he did. Human Rights Watch and Hans Blix also agree that Assad was probably to blame. But maybe they’re all wrong. Or, maybe they’re paid shills for the CIA.

My point is this: Who cares? Seriously, who cares? Whether or not it was Assad who used chemical weapons in Syria earlier this month, or last year, might matter to the leaders of the U.S., the U.K., and France, who decided to launch brazenly illegal and rather pointless airstrikes against his regime, but it doesn’t change the fact that the Syrian president-for-life is a monster who has perpetrated a vast array of blatant human rights abuses, crimes against humanity, and war crimes.

Now, I totally understand why those of you on the MAGA-supporting far right who cheer for barrel bombs don’t give a damn about any of this. But to those of you on the anti-war far left who have a soft spot for the dictator in Damascus: Have you lost your minds? Or have you no shame?

Remember: Whether Assad used chemical weapons in Douma is irrelevant to the moral case against him. What about the rest of his crimes? Was Assad any less of a war criminal when his “indiscriminate bombardments,” according to the U.N., were destroying “homes, medical facilities, schools, water and electrical facilities, bakeries and crops,” without the aid of sarin or chlorine? When he was dropping barrel bombs (68,000 since 2012, according to one count) on defenseless civilians? Or cluster bombs? Or good ol’-fashioned shells?

Was Assad any less of a war criminal when his troops “opened fire during protests in the southern part of Syria … and killed peaceful demonstrators” at the start of the Syrian uprising in March 2011, long before any jihadists had arrived in the country to fight against his regime? Or when his soldiers delivered the brutalized corpse of 25-year-old protester Ghiyath Matar — nicknamed “Little Gandhi” for his commitment to nonviolent activism — to his pregnant wife and parents in Deraya in September 2011?

Was Assad any less of a war criminal when his barrel bombs were forcing hundreds of thousands of Syrians to flee from their homes? An October 2015 survey of Syrian refugees living in Germany found that seven in 10 of them blamed Assad for the violence in their country, compared to one in three who blamed the Islamic State.

Was Assad any less of a war criminal when he was torturing tens of thousands of Syrians in his dungeons, many of whom ended up dead or disappeared? “The mass scale of deaths of detainees suggests that the government of Syria is responsible for acts that amount to extermination as a crime against humanity,” declared Paulo Sérgio Pinheiro, chair of the U.N. Commission of Inquiry on Syria, in February 2016.

Was Assad any less of a war criminal when his security forces were literally starving the people of Madaya, an opposition-held town an hour’s drive from Damascus, in 2015 and 2016? Scores of residents died from malnutrition and starvation, according to Physicians for Human Rights; others were forced to survive on soup made from grass and rice. “Let me be clear,” declared then-U.N. Secretary General Ban Ki-moon in January 2016, referring to the situation in Madaya and other regime- and rebel-held towns, “the use of starvation as a weapon of war is a war crime.”

Was Assad any less of a war criminal when he was bombarding and besieging stateless Palestinians at the Yarmouk refugee camp, a few miles from his presidential palace, in 2012, 2013, and 2014? “The harrowing accounts of [Palestinian] families having to resort to eating cats and dogs, and civilians attacked by [Syrian army] snipers as they forage for food, have become all too familiar details of the horror story that has materialized in Yarmouk,” noted Amnesty International in March 2014.

Was Assad any less of a war criminal when members of his notorious mukhabarat were repeatedly whipping Maher Arar with electrical cables in 2003, at the behest of the U.S. government and long before the Arab Spring kicked off in 2011? The Syrian president was an eager accomplice in the Bush administration’s “extraordinary rendition” program, and Syria became one of the “most common” destinations for rendered suspects. To quote former CIA agent Robert Baer: “If you want a serious interrogation, you send a prisoner to Jordan. If you want them to be tortured, you send them to Syria.”

Was Assad any less of a war criminal when he was funneling jihadists from Syria into Iraq to carry out suicide attacks — not just against American soldiers, but against Iraqi civilians, too? “Ninety percent of terrorists from different Arabic nationalities infiltrated Iraq through Syrian territory,” then-prime minister of Iraq, Nouri al-Maliki, claimed in 2009. “I went and met President Bashar al-Assad twice, and presented him with material evidence … that his security forces were involved in … transporting jihadists from Syria to Iraq,” the former Iraqi national security adviser Mowaffak al-Rubaie revealed in 2015.

Are you really going to tell me this is all “fake news”? All pro-rebel or pro-Gulf propaganda? That none of it happened? That none of the hundreds of thousands of civilian deaths, or the millions of refugees, are the fault of Assad? That none of the torture was real? Or that Palestinian refugees starved themselves? Maher Arar made it all up? Ghiyath al-Matar killed himself? Seriously?

Is this atrocity denial really necessary? Is it the only way you know how to oppose rapacious U.S. foreign policy, or Saudi-inspired extremism, or Israeli opportunism? By absolving Assad of well-documented war crimes, while smearing all humanitarian rescuers as “Al Qaeda” and all of the civilian victims of his bombs and bullets as “terrorists“? By cozying up to Iran and Russia in order to give the finger to the U.S. and Saudi Arabia? Is this not the “anti-imperialism of fools“?

Let me be clear, before you revert to the usual evasions and whataboutery, or try and smear me as a dupe of the CIA or an agent of the Zionists or the Qataris: Yes, Syrian rebel groups have committed their own fair share of murders, kidnappings, and torture. I’ve been a consistent critic of the rebels (see here, here, and here), and I need no lessons from any of you on their shameful role in prolonging and escalating the violence and chaos in Syria.

But here’s the thing: You can condemn rebel atrocities and western meddling in Syria without heaping praise on, or making excuses for, the loathsome Assad. Have you forgotten the old adage about walking and chewing gum at the same time? Or the one about my enemy’s enemy not being my friend? Denouncing the rebels and their backers doesn’t require defending Assad and his backers. Compared to ISIS, the Syrian president may be, in your view, the lesser of two evils — but he’s still evil.

And, look, we can argue over whether or not to support a “no-fly” zone (I didn’t); arming the rebels (I didn’t); U.S.-led airstrikes (I don’t); or regime change in Damascus (I don’t). What we can’t, and shouldn’t, argue over are the unspeakable war crimes committed by Assad against his own people; what we cannot afford to turn a blind eye to is the vile — and violent — nature of his regime.

The truth is that Bashar al-Assad is not an anti-imperialist of any kind, nor is he a secular bulwark against jihadism; he is a mass murderer, plain and simple. In fact, the Syrian dictator long ago booked his place in the blood-stained pantheon of modern mass murderers, alongside the likes of Hitler, Stalin, Mao, Pol Pot, Henry Kissinger, and George W. Bush. I can think of few human beings alive today who have more blood on their hands than he has.

So, why defend him? Why indulge in conspiracy theories on his behalf? Why minimize his crimes and abuses? And isn’t it more than a little hypocritical of you to constantly call out the violence of the West or the Gulf states or the rebels, while ignoring or downplaying the violence of Assad?