Mohammed al-Qahtani struggled with mental illness even before the U.S. government tortured him. 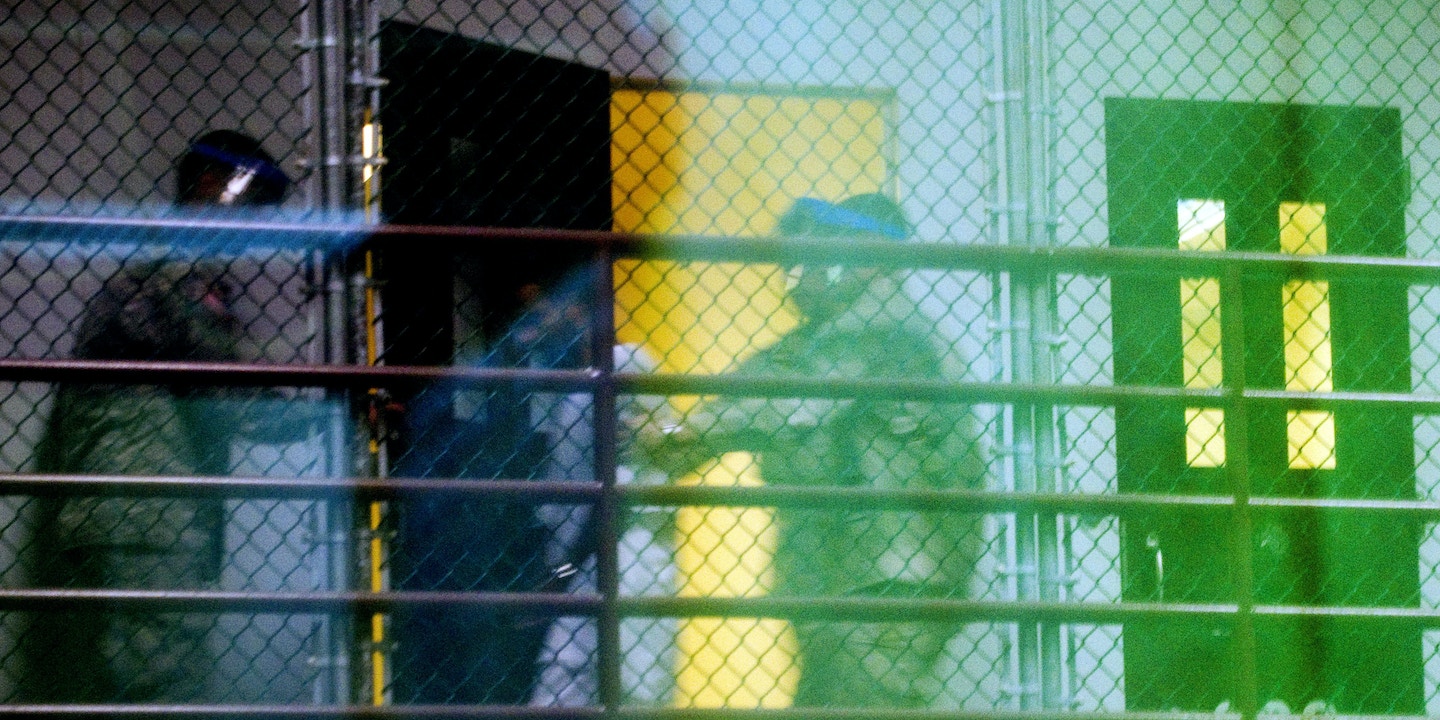 A mentally ill prisoner who U.S. officials have admitted to torturing at Guantánamo Bay will have a hearing in federal court this week that could lead to his repatriation to Saudi Arabia. Since being captured in Afghanistan by U.S. forces in 2002, Mohammed al-Qahtani has been held at the U.S. prison at Guantánamo Bay on allegations of having ties to high-ranking members of Al Qaeda. During the time he spent in U.S. custody, he was subjected to some of the most extreme forms of torture authorized by the U.S. government in the post-9/11 era. In 2009, a senior Bush administration legal official at Guantánamo decided that Qahtani could not be tried by the prison’s military commission, thanks to a regime of torture that had left him in “life-threatening condition.”

“The government knew from very early in his detention that this man was manifesting serious psychiatric conditions.”

In the hearing, due to be held at U.S. District Court for the District of Columbia this Thursday, lawyers for Qahtani plan to ask for his current condition to be formally examined by a mixed medical commission, a group of neutral doctors intended to evaluate prisoners of war for repatriation. That commission could potentially order the government to release him from custody and return him home to Saudi Arabia, based on their evaluation of his mental and physical state.

“The government knew from very early in his detention that this man was manifesting serious psychiatric conditions,” said Ramzi Kassem, Qahtani’s lawyer and a City University of New York law professor. “As early as 2002, a senior FBI official reported observing ‘behavior consistent with extreme psychological trauma’ in Mr. Qahtani, like ‘talking to nonexistent people, reportedly hearing voices, crouching in a corner of the cell covered with a sheet for hours on end.’” Kassem went on, “That was before the worst phase of torture in U.S. custody, which only compounded those conditions. Torture can make a sane person lose their mind, but for someone who had documented mental health issues going back to the age of 8, this treatment was even more harmful.” Qahtani’s case is unique: He was the first and only individual that the U.S. government has explicitly acknowledged torturing during detention. In the time he spent in Guantánamo, court documents from his case state that he was subject to “solitary confinement, sleep deprivation, extreme temperature and noise exposure, stress positions, forced nudity, body cavity searches, sexual assault and humiliation, beatings, strangling, threats of rendition, and water-boarding.” The torture that Qahtani experienced at Guantánamo also exacerbated serious pre-existing mental illnesses that he suffered as a youth in Saudi Arabia — conditions so severe that he was committed to a mental health facility there in 2000, at the age of 21.

Under the George W. Bush administration, then-Secretary of Defense Donald Rumsfeld signed off on the torture regimen used against Qahtani at Guantánamo Bay. Rumsfeld notoriously scribbled a note in the margins of a memo authorizing the use of a number of torture techniques on Qahtani suggesting that the terms should be made harsher. In 2008, during his sixth year of U.S. detention at Guantánamo Bay, Qahtani attempted to kill himself after being informed that he may face charges that would carry the death penalty.

The U.S. government claims that during interrogation sessions Qahtani confessed to a range of crimes related to his support of Al Qaeda, while also providing information that incriminated other Guantánamo detainees. Media reports have occasionally described Qahtani as the “20th hijacker” in the 9/11 attacks, based on an aborted attempt he made to enter the country in August 2001. Qahtani later repudiated confessions that he made under torture about his and other detainees’ links to Al Qaeda.

“Mr. al-Qahtani’s symptoms of PTSD and schizophrenia are chronic and are worsening.”

Since the government deemed Qahtani to be ineligible for trial by military commission in 2009 as a result of the torture he had suffered, he has continued to be held in a state of legal limbo. A medical evaluation submitted this week by a psychiatrist who examined Qahtani found that he exhibited symptoms consistent with post-traumatic stress disorder and schizophrenia. In addition to these conditions, Qahtani is reportedly afraid to sleep due to a fear of “ghosts,” a fear which is consistent with the phenomenon of post-traumatic nightmares. The medical evaluation also notes that “Mr. al Qahtani’s symptoms of PTSD and schizophrenia are chronic and are worsening,” adding that “these symptoms will therefore continue beyond one year, will probably continue to worsen, and will be present throughout his lifetime.”

The use of torture during the war on terror, both at Guantánamo Bay and various other detention facilities around the world, continues to haunt U.S. government efforts to manage its detention policy. In 2014, the Senate Intelligence Committee released a landmark report about CIA torture that documented the systematic torture of terrorism suspects in agency custody. Similar reports about the torture and murder of detainees in Iraq and Afghanistan during U.S. military occupations in those countries have also been issued over the past decade, demonstrating that the mistreatment of detainees has been both serious and widespread in areas where the United States has operated.

Despite these findings, no high-ranking officials have ever been held legally responsible for torture, largely thanks to the decision made under President Barack Obama not to conduct backward-looking prosecutions. This failure to provide legal accountability — even in cases like Qahtani’s, in which U.S. officials acknowledged the torture — has since opened the door for Bush-era officials who authorized torture to return to government service at even higher levels under President Donald Trump.

“President Obama admitted in 2014 that the U.S. government had ‘tortured some folks,’ but he never named names,” said Kassem, Qahtani’s lawyer. “So we had a crime but no officially acknowledged victims and, crucially, no identified perpetrators held to account. Mr. Qahtani is therefore the only person in the entire so-called U.S. war on terror who the government has publicly admitted torturing. Repatriating Mr. Qahtani to be committed and treated in a Saudi psychiatric facility would be in everyone’s interest. The United States cannot viably prosecute a man it has admitted torturing, nor can it treat him.”

Top photo: Guards seen through a one-way mirror move a detainee from his cell in the detention facility in Guantánamo Bay, Cuba, on Jan. 19, 2012.