There is a big difference between the kind of leaks Trump usually decries on Twitter and the kind that lead to criminal prosecutions. By now, it is well known that Donald Trump wants to jail reporters in order to force them to reveal their sources. “They spend a couple of days in jail, make a new friend, and they are ready to talk,” Trump told former FBI Director James Comey, according to a memo Comey wrote after a conversation between the two men in February 2017.

The Justice Department turned over this memo, along with others Comey wrote about his meetings with Trump before he was fired last year, to congressional leaders last week. The memos were leaked almost immediately. Republicans in Congress apparently wanted them out in order to attack Comey. While they don’t make Comey look particularly good, they generally make Trump look worse.

Just as the Comey memos were being published, former Forbes reporter Jonathan Greenberg supplied further proof that Trump has been obsessed with how he is portrayed in the press for as long as anyone can remember. Greenberg dug up a 1984 audiotape in which Trump pretended to be someone else in order to try to convince Forbes to include Trump on its roster of the wealthiest Americans. Greenberg says that Trump called him claiming to be an aide named John Barron, hyping the value of Trump’s assets in order to get him on the Forbes 400 list. (The Washington Post has separately reported that in his dealings with the press in the 1980s, Trump often pretended to be a purported Trump spokesperson named John Barron, a man who didn’t exist.)

Trump is clearly addicted to attention and fixates on every detail of his public image. As a corollary, he wants to punish journalists who cast him in a negative light or reveal things that he would rather not be widely known.

But there is a vast difference between the leaks that Trump usually decries on Twitter – such as an aide or confidant chattering to a reporter about the embarrassing details of Trump’s own behavior – and the kind of leaks that lead to criminal prosecutions. The latter has nothing to do with personnel moves at the White House; instead, they involve disclosures of classified information about national security programs and operations.

To be sure, the Comey memo shows that Trump is sometimes upset about leaks that probably do involve classified information – but only to the extent that the leaks also involve Trump or people close to him. Comey described Trump’s anger about the leaks of transcripts of his phone calls with the leaders of Mexico and Australia. Trump also groused to Comey about leaks relating to a call between former national security adviser Michael Flynn and “the Russians.” But Trump made it clear that he cared about the Flynn leak because he was sensitive to accusations of collusion between the Trump camp and Russia. Comey wrote that after complaining about the leak of the Flynn phone call, Trump immediately said that the call “was not wrong in any way (he made lots of calls) but that the leaks were terrible.”

So far, though, the only two people who have actually been charged with leaking since Trump became president have not been accused of revealing anything directly related to Trump himself. Reality Winner, a National Security Agency contractor, was arrested last year and charged under the Espionage Act for allegedly leaking an NSA document about Russian hacking of U.S. voting systems. Terry J. Albury, a former FBI agent was charged in March with two counts related to the unauthorized disclosure of national security information, according to documents filed by the Justice Department. Albury pleaded guilty last week to sharing the documents with the press, in what his lawyers described as “an act of conscience.”

Both Winner and Albury have been accused of providing classified information to The Intercept. In a statement when the charges against Albury were made public, Betsy Reed, The Intercept’s editor-in-chief, said: “We do not discuss anonymous sources. The use of the Espionage Act to prosecute whistleblowers seeking to shed light on matters of vital public concern is an outrage, and all journalists have the right under the First Amendment to report these stories.”

The Winner and Albury cases are the first fruits of Attorney General Jeff Sessions’s attempts to placate Trump by aggressively targeting leaks and prosecuting leakers. The Justice Department has said that it has many more leaks under investigation. But will these national security-related leak prosecutions satisfy Trump? They almost certainly won’t put a stop to leaks of unflattering information about Trump himself.

Many others in Washington’s political and government elite likely welcome these prosecutions, however. In the same memo that documents Trump’s desire to jail reporters, Comey, lately a darling of the press, described falling all over himself to support the president’s general view, noting: “I tried to interject several times to agree with him about the leaks being terrible, but was unsuccessful.” 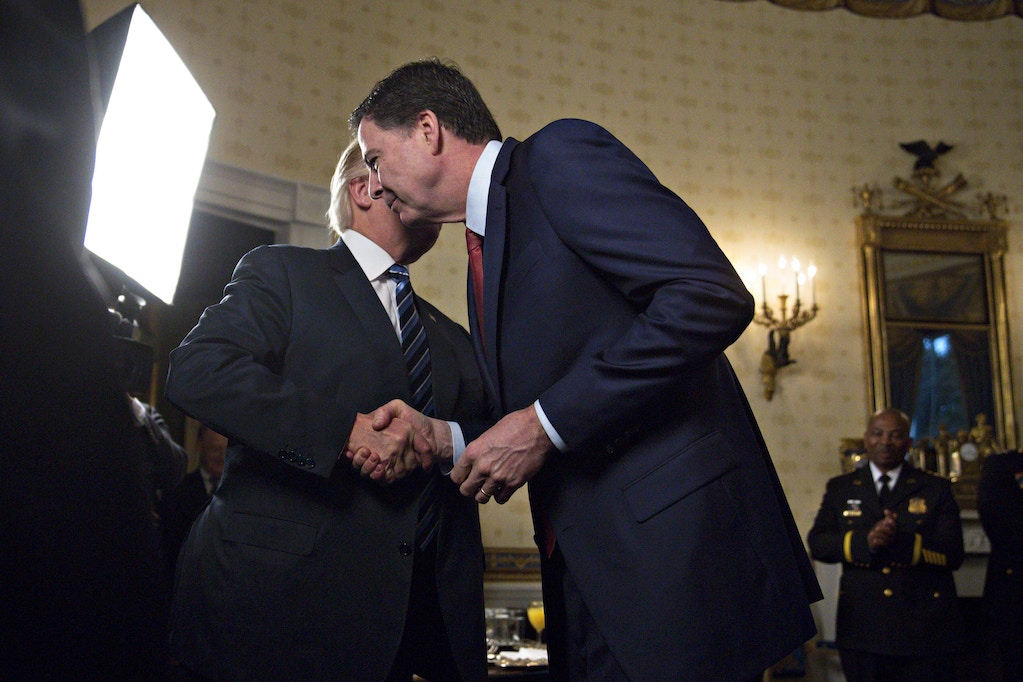 President Donald Trump shakes hands with James Comey, director of the Federal Bureau of Investigation, during a reception in the Blue Room of the White House on Jan. 22, 2017 in Washington, D.C.

According to the memo, Comey tried to educate Trump on the importance of keeping national security information secret. “I then explained why leaks purporting to be about FBI intelligence operations were also terrible and a serious violation of the law,” Comey wrote. “I explained that the FBI gathers intelligence in part to equip the President to make decisions, and if people run around telling the press what we do, that ability will be compromised. I said I was eager to find leakers and would like to nail one to the door as a message.”

When Trump mentioned jailing reporters, referring specifically to former New York Times journalist Judy Miller, Comey wrote: “I explained that I was a fan of pursuing leaks aggressively but that going after reporters was tricky, for legal reasons and because DOJ tends to approach it conservatively.” Comey then reiterated his point about leakers, saying he saw the “value of putting a head on a pike as a message.” When Trump again advocated jailing reporters and made his sick joke about what might happen to them in detention, Comey wrote that he laughed at the idea.

Jill Abramson, my friend and former editor at the Times, is rightly as outraged by Comey’s laughter as she is by Trump himself who, as she notes, “always manages to exceed our low expectations.” “This exchange chilled my blood,” she wrote in The Guardian, calling it “simply nauseating.”

The Comey-Trump exchange shows how fragile press freedom is in the United States today. These two men disagree about many things, but they share a desire to punish whistleblowers and the reporters who, in a democracy, seek to shed light on the hidden actions of government.

At times like this, it’s worth remembering where we started. “The people are the only censors of their governors,” Thomas Jefferson wrote in 1787, adding that the way to prevent abuses of power “is to give [the people] full information of their affairs thro’ the channel of the public papers, and to contrive that those papers should penetrate the whole mass of the people. … Were it left to me to decide whether we should have a government without newspapers or newspapers without a government, I should not hesitate a moment to prefer the latter.”