In his memoir, the former FBI director portrays his loyalty to law and order as a saintly devotion. In fact, it’s a symptom of his ruthlessness. 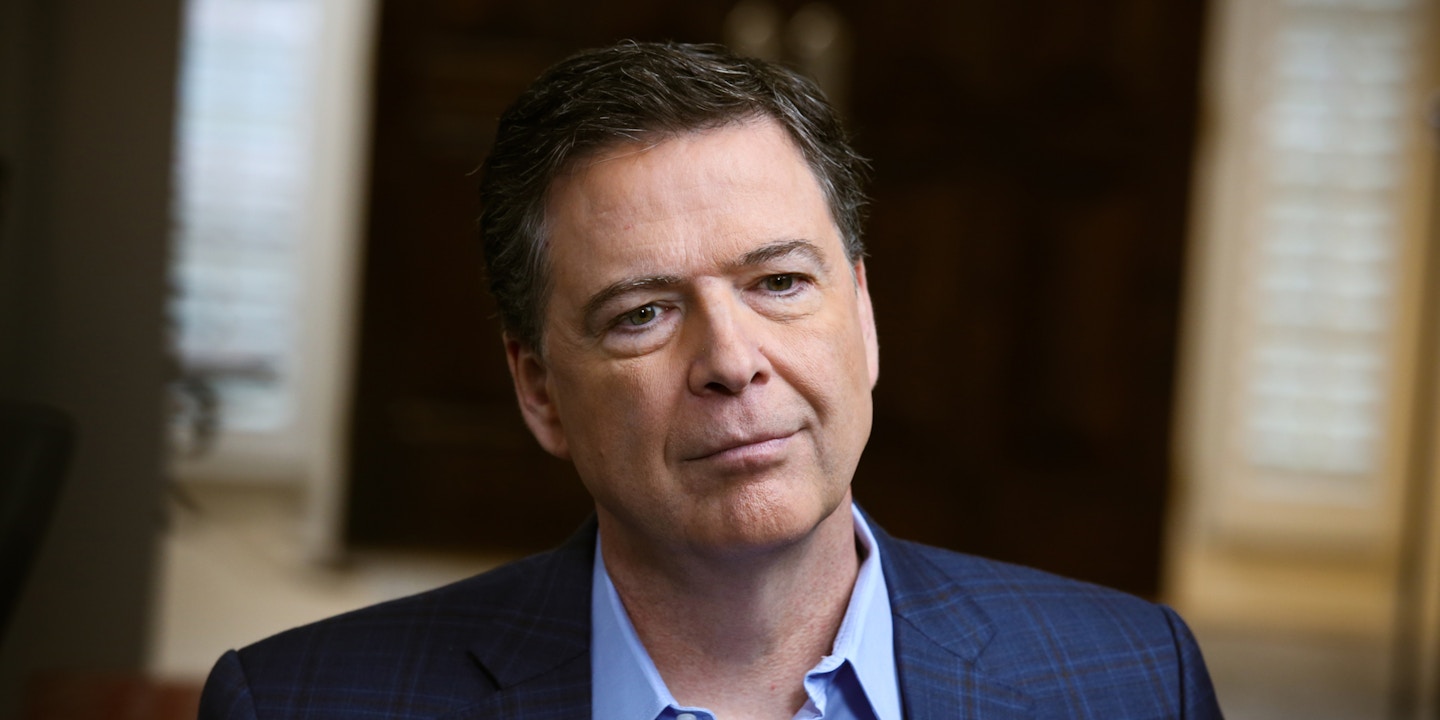 In his new book, James Comey portrays himself as a law enforcement saint who desires only the best for us, and the best is manifestly not President Donald Trump. But if you read “A Higher Loyalty” with more than its anti-Trump morsels in mind, a less benevolent version of Comey emerges — akin to the King George character in “Hamilton,” who lovingly sings to his rebellious American subjects, “And when push comes to shove/ I will send a fully armed battalion/ To remind you of my love.”

Most stories about Comey’s best-selling memoir have focused on its Hamlet-like agonizing over his potential role in tilting the 2016 election, and his horror at discovering that Trump, once in the White House, was as thuggishly corrupt as the mafia dons Comey had prosecuted before he led the FBI and got fired by Trump. But Comey’s insistence on upholding the law is devotional to the point of ruthlessness, as he makes clear when explaining the need to send Martha Stewart to jail in 2003 for lying about an insider stock tip she had received.

“People must fear the consequences of lying in the justice system or the system can’t work,” Comey writes. “There was once a time when most people worried about going to hell if they violated an oath taken in the name of God. That divine deterrence has slipped away from our modern cultures. In its place, people must fear going to jail. They must fear their lives being turned upside down. They must fear their pictures splashed on newspapers and websites. People must fear having their names forever associated with a criminal act if we are to have a nation with the rule of law.”

This is ridiculous and dangerous, because it suggests Americans are insufficiently cowed by the necessarily God-like wrath of the machinery of law enforcement. Comey is worried that the country risks degenerating into criminality and sloth — and that all that’s standing between us and chaos is the FBI’s lash and our submission to it. Rather than separating himself from the Trump administration’s extremism, Comey sounds much like retired Gen. John Kelly, the White House chief of staff who recently bemoaned the lost discipline of an earlier and supposedly sunnier era.

“You know, when I was a kid growing up, a lot of things were sacred in our country,” Kelly said during a bitter press conference, in which he tried to smear a member of Congress who had accurately reported that a grieving war widow was offended by comments Trump made in a fumbled condolence call. “Women were sacred, looked upon with great honor. That’s obviously not the case anymore, as we see from recent cases. Life — the dignity of life — is sacred. That’s gone. Religion, that seems to be gone as well.”

Like Kelly, Comey frames his blinkered nostalgia as public virtue, and he’s largely succeeding: His book has been lavishly and warmly received. Comey is certainly right about the danger of Trump, but that doesn’t mean he’s right about other things. For instance, he shows minimal concern for the police killings of black men and the protest movement that’s grown out of them. He seems unable to believe that poor and minority communities have a fair case against the way law enforcement has been practiced on them.

In a short chapter on racial injustice, Comey describes the killings of Eric Garner, Tamir Rice, Walter Scott, and Freddie Gray as “tragic deaths.” But he turns the killings around, lamenting that they “dominated perceptions of the police. They swamped and overshadowed millions of positive, professional encounters between citizens and police officers, and extraordinary anger was building toward all uniformed law enforcement.” Yes, Comey really went there — blaming the victims of police abuse for making people upset that police were abusing them.

Comey did not hide these views while at the FBI, and after making a speech in Chicago in 2015 that was not well received by the civil rights community, he was summoned to the Oval Office by then-President Barack Obama. Comey describes that session in his book, and he seemed to double down, telling the country’s first black president that the law enforcement community was upset at the way Obama had used the phrase “mass incarceration.” It was offensive, Comey told the president.

This is a delusion worthy of King George.

The idea that poor defendants are represented individually is true in a strict sense, but if you cannot afford a good lawyer of your own (many Americans cannot), you are unlikely to have decent representation in the face of prosecutor’s offices with significant resources. The idea that people are convicted individually is also a myth, because more than 90 percent of all cases at the state and federal level are settled with plea bargains in the face of prosecutorial threats of unduly heavy sentences if they go to trial; trials are rare but intimidation is not. And the notion of appeals is another sad matter — only the well-off or the fortunate who obtain lawyers with the resources and the time for aggressive litigation can pursue appeals that have a decent chance of overturning a bad verdict.

There is one notable admission inside “A Higher Loyalty” of the criminal justice system’s imperfections; it relates to former general and CIA director David Petraeus, who shared top secret notebooks with a biographer who was also his girlfriend. But even here, Comey fails to correctly reckon with the implications of the system’s failure.

Ordinary mortals have been unjustly prosecuted under the Espionage Act for leaking far less than did Petraeus, who also lied to the FBI about what he had done. Yet Petraeus was the beneficiary of misty tenderness from the Justice Department, reaching a deal to plead guilty to just the misdemeanor of mishandling classified information, for which there would be no prison term. He completely avoided any penalty for lying, even though the DOJ’s description of the plea deal made clear that he had deceived the FBI when the bureau’s agents asked whether he had shared his classified notebooks with Paula Broadwell, his biographer and lover. (If there were prosecutions for operational security stupidity, Petraeus would merit a life term for storing the notebooks in an unlocked drawer in his house.)

“It was not a close call,” Comey writes, critically, of the decision by former Attorney General Eric Holder to give Petraeus a pass on stiffer charges. Holder and Obama were apparently concerned about the political cost of pursuing felony charges against a decorated general who had admirers on both sides of the political aisle. “I believed, and still believe, that Petraeus was treated under a double standard based on class,” Comey writes. “A poor person, an unknown person — say a young black Baptist minister from Richmond — would be charged with a felony and sent to jail.”

He’s right about that. The powerful and the connected tend to walk free or get better treatment. The latest example is I. Lewis “Scooter” Libby, whose original prison sentence, for lying to the FBI about having disclosed the identity of a covert CIA agent, was commuted by former President George W. Bush in 2007, and Trump just pardoned Libby entirely. But Comey’s remedy is not leniency for the poor and minorities who go to prison in disproportionate numbers; he’s calling for more white and powerful people to be tossed into Sing Sing. For Comey, the answer to injustice isn’t less incarceration, it’s more incarceration.

Comey has been lightly mocked for writing in a homespun manner that serves as a literary pretense for a powerful insider who presided over the FBI in the post-9/11 era. He writes in an appealing way about his childhood, for instance, and about being bullied, and how it was painful but “made me a better person. It instilled in me a lifelong hatred for bullies and sympathy for their victims.” It’s clear that Comey thinks of himself as a victim, and of Trump as the bully. But his self-absorption renders Comey unable to admit that for millions of Americans, the bully is the criminal justice system.

Correction: April 18, 2018
An earlier version of this story used imprecise and incorrect language to describe the difficulty of mounting appeals. The language has been clarified.