A Russian war correspondent appears to have lied to conceal that he interviewed a Syrian boy at an army facility frequented by Russian military advisers. 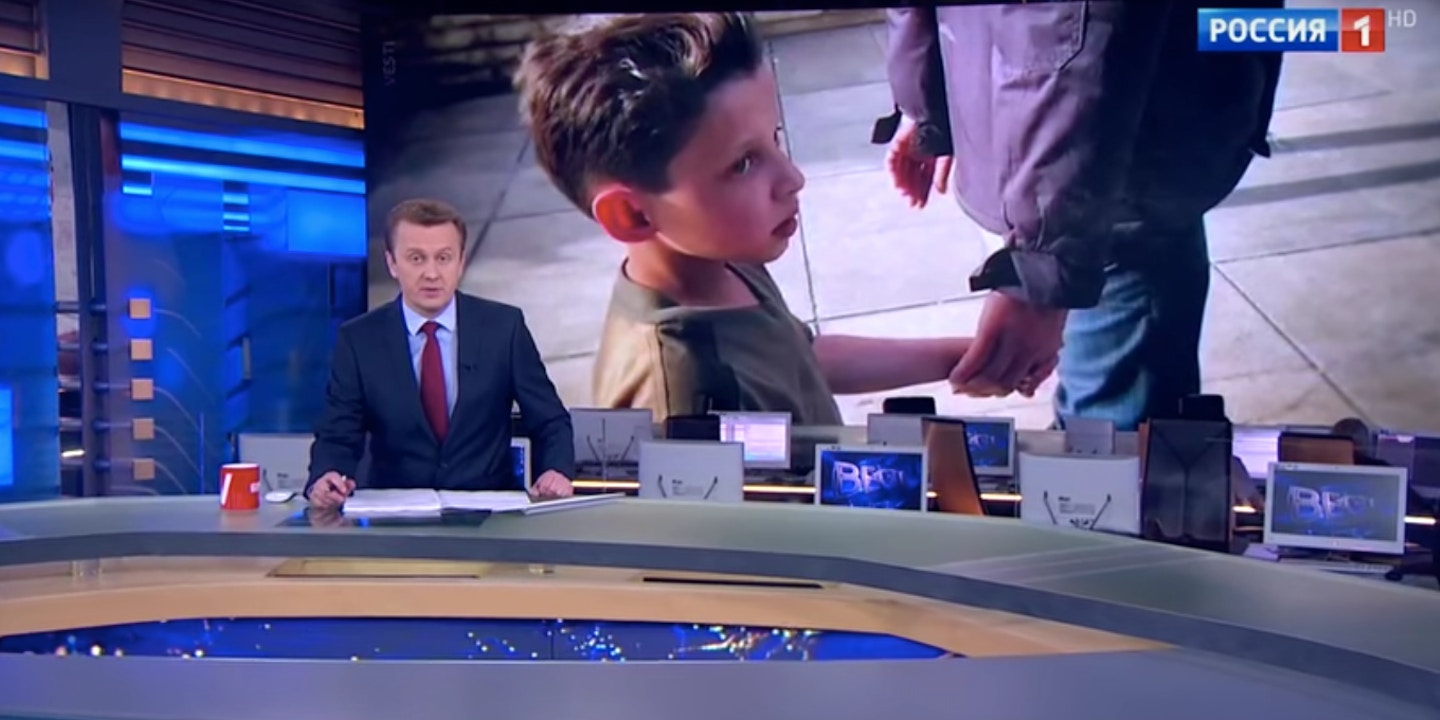 An interview with an 11-year-old Syrian boy broadcast last week in the main news show on Russia’s state-owned channel, Rossiya-1, appears to have been filmed not in the boy’s hometown, where a suspected chemical attack took place, but at a Syrian army facility where Russian military advisers were present.

The report, claiming to prove that video of the attack’s aftermath was fake, is considered so important by Russian officials that Vassily Nebenzia, Russia’s ambassador to the United Nations, plans to screen it for the Security Council.

As state news channels included the interview in bulletin after bulletin, and it was featured in a report on the country’s main Sunday night news show, the boy, identified as Hassan Diab, was described as a crucial witness because he was first seen being doused with water in video recorded by an opposition activist in the rebel-stronghold of Douma just after the suspected chlorine gas attack there on the night of April 7.

[Update: April 15, 2022. When YouTube decided to suspend the accounts of broadcasters financed by the Russian government following the Russian invasion of Ukraine, the Russian state television report featuring Hassan Diab embedded in this article was made temporarily unavailable. A partial copy of that report remains available on Twitter and is embedded below.]

Russia: Boy in Douma ‘alleged chemical attack’ in the footage he says he was lured with cookies, then sprayed with water. 19-04-2018 pic.twitter.com/fXIG0Hmntu

After Islamist rebels were driven out of Douma the following day, and Russian military police took control of the town, the Rossiya-1 correspondent Evgeny Poddubnyy found the boy and produced a report claiming that the child had been coerced into acting in the video by volunteer rescue workers who hoped to provoke Western military intervention.

Poddubnyy’s report was promoted by Russian diplomats, remixed for international broadcast on the Kremlin-financed Russia Today channels, and injected into social networks via In the Now, a government-owned social media news outlet that produces reports and commentaries with no indication that it is funded by the Russian state.

Russian MFA Spokesperson #Zakharova: If anyone should be the main speaker at the UN Security Council it's the 11yo Syrian boy Hassan Diab and his family. They should tell the UNSC all about the #WhiteHelmets, how they stage their fakes. I wonder if US would grant them visas... pic.twitter.com/Ua1F4gBcy9

Russia’s ambassador to the United Kingdom even screened Poddubnyy’s report for journalists in London, including the Chinese state broadcaster CCTV, which uncritically presented his claim that the young boy’s testimony proved the attack was a hoax.

The accusation that the boy had been used to create “fake news” of a chemical attack was also repeated uncritically by some Western news outlets, like Metro UK, a free newspaper distributed to British commuters.

Those news outlets seemed entirely unaware of the fact that Syrian officials have claimed since the first weeks of the uprising against President Bashar al-Assad, in 2011, that all evidence of violent repression by the state must be fake.

At a news conference in Damascus on March 24, 2011, an adviser to the Syrian president, Bouthaina Shaaban, lectured Lina Sinjab of the BBC for referring to video evidence posted on YouTube in a report about the use of force against peaceful protesters in the southern city of Dara’a. There was no need for foreign broadcasters to look to YouTube, Shaaban told Sinjab, since they could rely on the government’s own journalists at state-run television who “have their credibility.” Since “the events are happening in Syria,” she added, “only Syrian television tells the truth, no one else.”

Five days after it took military control of Douma, Russia’s ministry of defense screened video for reporters in which two medics from the town’s hospital claimed that victims of the bombardment treated in their clinic on the night of the attack showed no signs of chemical exposure. Instead, the medics said, the survivors were treated for breathing problems and doused with water by opposition activists who wanted to create the impression that there had been a chemical attack. Colleagues of the medics who had escaped to an opposition-controlled area of Syria told The Guardian that the medical workers who remained in Douma had been threatened with punishment by Syrian government forces if they did not give interviews saying that the footage was fake and there had been no chemical attack.

When asked on Monday if the boy and his father, who also appeared in the report, might have been pressed to lie about the attack once Douma came under the control of Russia and Syria — the government accused of the chemical attack — Poddubnyy told The Intercept via Twitter that he could “guarantee that the interview was recorded without pressure on the child’s father and the boy himself.” The reporter also insisted that he had not been introduced to the boy by Russian military “peacekeepers” but by sources at the hospital in Douma where the video of attack survivors being treated was recorded.

Pressed to explain the presence of three uniformed men who could be seen in the background at the start of his report, the correspondent admitted that they were from the Russian Reconciliation Center for Syria — a unit of military advisers currently charged with registering Douma’s civilian population — but insisted they were merely on their way to a “local cafe.”

Poddubnyy also revealed that his interview with the boy and his father had not been recorded in Douma, but in Damascus, the Syrian capital, near the Dama Rose hotel. When asked directly if the piece had been filmed on the grounds of the Syrian Army Officers Club, which is next door to that hotel, Poddubnyy said that it had not.

However, that appears to have been a lie. An exhaustive, crowd-sourced search for images of the exterior of the building seen at the start of Poddubnyy’s report reveals that it almost certainly was recorded at the military facility, which is just a short distance from Syria’s ministry of defense.

At the start of the Russian television report, the boy and his father are seen walking outside a well-appointed building with a distinctive tiled floor and arched entryway before the uniformed men walk past. After several people familiar with the city independently suggested on Twitter that the location looked like the Syrian Arab Army’s Officers Club, that appeared to be confirmed by a photograph of that building’s exterior found on the Syrian defense ministry’s website. 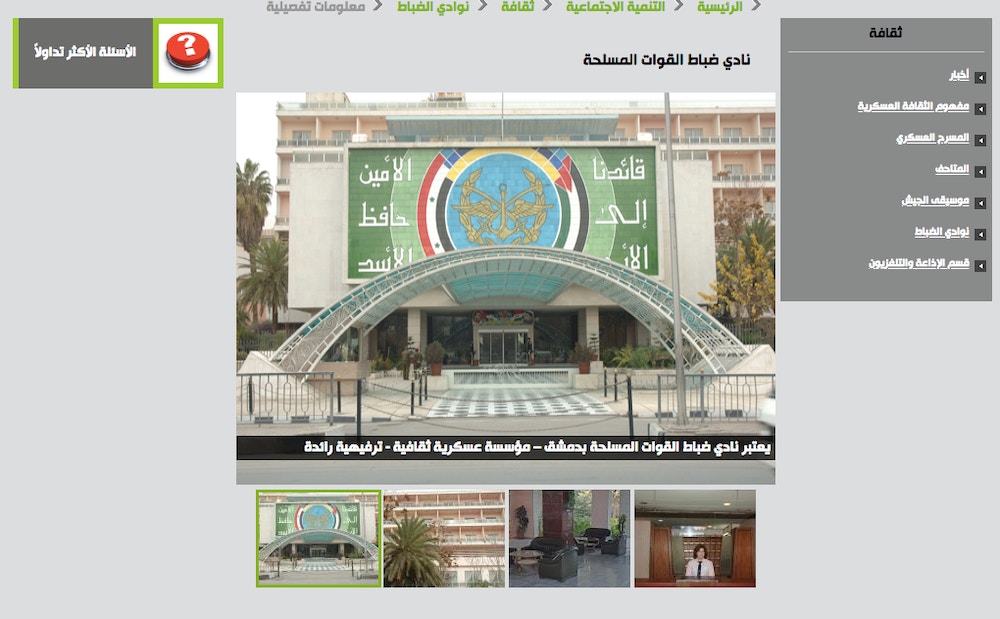 The same distinctive arch, tiled floor, and stone door frame can also be seen in a reverse angle taken from inside the building, discovered by a Syrian blogger on the website of a Damascus architecture firm hired to refurbish the club. A screenshot of the entrance to the Syrian Army’s Officers Club in Damascus from the website of Maksoud Architectural Group.

Another image, found on Facebook by an open-source researcher, even shows a poster of President Bashar al-Assad above the club’s doorway that is partially visible in the original Russian TV report. A screenshot of an image posted on a Syrian Facebook page in September 2017, showing the exterior of the Syrian Army Officers Club in Damascus.

In fact, several images of the club’s distinctive exterior have been posted on Facebook in recent years. A screenshot of an image of the exterior of the Syrian Army Officers Club in Damascus posted on Facebook.

Poddubnyy — whose channel complained bitterly on Monday that his work had been ignored by Western networks like CNN, Fox News, France 24, and the BBC — did not immediately respond when confronted with the visual evidence that he had, indeed, conducted his interview with the boy and his father at a Syrian military facility used by Russian officers.

While some Syrian activists welcomed evidence that the boy and his father might have been interviewed under duress, undermining the Russian case that the attack had been a hoax, others, who have grown exhausted and bitter after seven years of war, were distressed by the attempt to fact-check the story.

“There is no realistic way to find out if the boy was coerced or not, and it doesn’t even matter,” the Aleppo blogger who writes as Edward Dark said in an internet message. “Syrian lives are propaganda pieces in a cynical global power struggle, each side wants to win public opinion over to his side, and doesn’t give a flying fuck about Syrians beyond their use as emotional manipulation tools,” he added. “And yes, journalists are at the forefront of this. We’re sick of this, we just want to end the war and be left alone.”

In an online debate over the footage of the boy and his father agreeing to the Russian and Syrian government claims that there was no chemical attack, Lina Sinjab, the BBC correspondent observed: “What can people say in government-controlled areas with Russian media except the government line?”

Rami Jarrah, a Syrian media activist who helped document the first days of the uprising, and then the descent into war, argued that anyone familiar with Assad’s Syria knows “that these people do not have the choice to say anything other than what the regime’s narrative spells.”

Update: April 24, 2018 EDT
As The Moscow Times revealed on Tuesday, the version of Evgeny Poddubnyy’s report embedded at the start of this post, and featured on Russian state television’s main Sunday news show, also misled viewers by falsely presenting production stills from a Syrian-born director’s 2016 fiction film “as evidence that the reported chemical attack was staged.”

That version of the report, presented by one of Russia’s most prominent television hosts, Dmitry Kiselyov, claimed that a man identified as Fares Muhammad Mayas was a whistle-blower exposing that activists had staged footage of chemical attacks. In fact, as the Chinese state newspaper Global Times reported in 2016, the film, shot in the suburbs of Damascus that September, was always intended to be a drama based on real events.

Update: April 15, 2022
This article was updated to replace video from Russian state media outlets that was removed from social networks after it was originally published.

Top photo: A screenshot from the YouTube channel of Rossiya-1, a state-owned channel, showing Hassan Diab, 11, a Syrian boy who witnessed the aftermath of a suspected chemical attack this month.