For Donald Trump to Succeed With North Korea, He’ll Need a Pragmatic Definition of “Denuclearization”

Thanks to South Korean President Moon Jae-in, the Trump-Kim summit could be a true success for the world — if Trump can be flexible about what words mean. 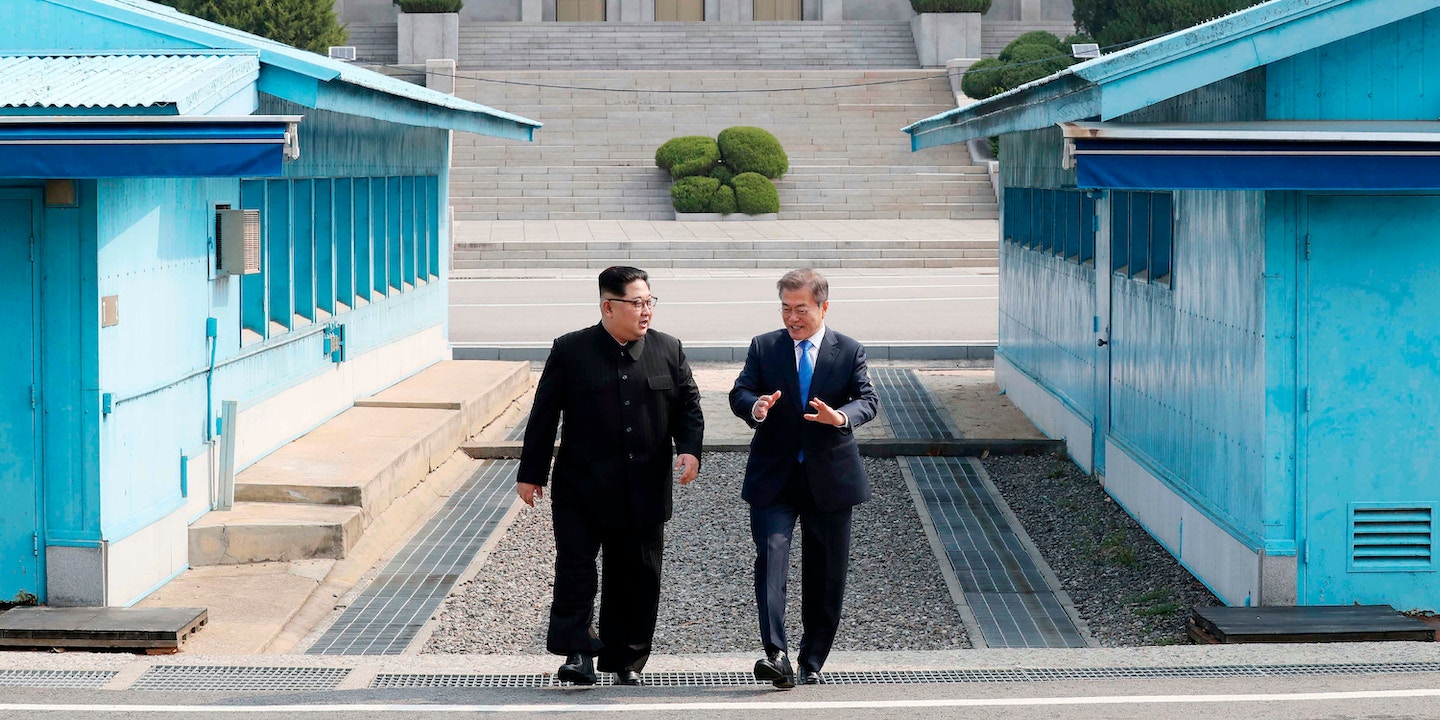 The summit on Friday between South Korean President Moon Jae-in and North Korea’s leader Kim Jong-un was about far, far more than North Korea’s nuclear weapons program. The “Panmunjom Declaration” they released at the meeting’s conclusion has 21 paragraphs; just one of them addresses the nuclear issue.

Most importantly, Moon and Kim affirmed their intention to finally end the Korean War – which began in 1950 and, formally speaking, was only suspended by an armistice in 1953 — and “establish a permanent and solid peace regime on the Korean Peninsula.” Their statement laid out steps they plan to take to heal the scars inflicted by Korea’s bitterly tragic history. All of this will be done based on “the principle of determining the destiny of the Korean nation on their own accord” – something that would manage to simultaneously perturb the United States, Japan, and China, each of which has brutalized the Koreas for their own ends.

Seen from the U.S., however, the nuclear issue is the only thing that matters. And according to the declaration, “South and North Korea confirmed the common goal of realizing, through complete denuclearization, a nuclear-free Korean Peninsula.”

So with a historic summit between Kim and U.S. President Donald Trump imminent, the question now is what “denuclearization” means, most importantly to Trump himself.

Sleepy Eyes Chuck Todd of Fake News NBC just stated that we have given up so much in our negotiations with North Korea, and they have given up nothing. Wow, we haven’t given up anything & they have agreed to denuclearization (so great for World), site closure, & no more testing!

At one end of the spectrum is Trump’s national security adviser John Bolton, who before his appointment said the only thing for the U.S. to discuss with Kim was “what ports should American freighters sail into and what air bases should American cargo planes land at so that we can dismantle your nuclear weapons program, put it in those planes and boats and sail it back to America to put it at Oak Ridge, Tennessee.”

That is a clear, commonsense definition of denuclearization. It also would be a catastrophic stance for Trump to take, given that there’s absolutely no chance that North Korea would agree to it. That is part of its appeal to Bolton, who is itching for the U.S. to start a gigantic war with North Korea.

The good news is the Trump administration as a whole has not ruled out a definition of “denuclearization” that would be achievable and defuse tensions between the U.S. and North Korea.

On April 23, White House Press Secretary Sarah Huckabee Sanders told reporters that the word means “that North Korea doesn’t have or isn’t testing nuclear missiles,” something which is a fairly practical goal in the near-term.

When Sanders was pressed by reporters later the same day to endorse something like the Bolton perspective, she refused to do so, and left Trump maximum wiggle room for the summit. “Certainly the goal is denuclearization of the peninsula,” she said. “I’d refer you back to also South Korean President Moon, who has said that North Korea has expressed a will for complete denuclearization. And certainly that’s the focus of any conversation and negotiation that the United States will have with North Korea.”

Secretary of State Mike Pompeo — who secretly met with Kim Jong-un — also offered some nuance during his recent confirmation hearings. Colorado’s Republican Sen. Cory Gardener tried to pin Pompeo down, asking him: “To be clear, again, the only goal the United States has as it relates to North Korea is the complete, verifiable, irreversible, denuclearization of North Korea?”

“I want to be careful about complete,” Pompeo replied. “North Korea also has a significant military arsenal. One of the largest armies in the world. We need to insure we continue to provide a strategic defense framework for our allies in the region, the South Koreans, and others as well. But the purpose of the meeting is to address the nuclear threat to the United States.”

All this verbiage suggests the possibility – always subject to change at any moment with Trump – that the U.S.-North Korea summit could end with Trump stepping back from the brink, by accepting a deal that doesn’t fulfill the wishes of hard-liners, while simultaneously claiming victory. This is because a continuing freeze on North Korea’s nuclear and ICBM testing would be a genuine concession by Kim. While Kim recently claimed that this cessation was meaningless because North Korea is already certain it can successfully hit the U.S. with nuclear missiles, experts, like Ploughshare Funds President Joe Cirincione, disagree.

In an interview with The Intercept, Cirincione summarized Kim’s position as: “’These are acts of strength, I’ve finished the program, I can close the test sites now, I can stop testing, everything’s fine, we have our nuclear deterrent.’”

But is that true? “Probably not,” Cirincione says. “At least not by the standards of most nuclear armed states. No nuclear armed state has willingly stopped their test program with so few tests. All nuclear scientists want more tests.”

Cirincione believes the North Koreans, with their nuclear program as it currently stands, have around a 50-50 chance of being able to successfully utilize a long-range missile to hit the United States. In order to improve the odds, they would need more tests.

Kelsey Davenport, director of Nonproliferation Policy at the Arms Control Association, agreed. “The accuracy and reliability of those systems is low because North Korea has conducted so few tests,” Davenport told The Intercept. “So a moratorium on nuclear tests, intercontinental ballistic missile tests, could certainly prevent North Korea from qualitatively advancing its program.” Davenport notes as a caveat that North Korea has cheated on international agreements before and that the Trump administration should look for a way to “lock in” those commitments during upcoming negotiations. (The U.S. has also cheated on its end of the bargain in previous agreements with North Korea.)

This is far from what most people would understand as “denuclearization.” But it would be an extremely positive first step, and it could lay the groundwork for future progress toward real peace.

Both Cirincione and Davenport argue it is possible that with a reduction in hostility from the U.S., North Korea could begin a process that, in the long term, ends with them actually giving up nuclear weapons. (The only country that has built nuclear weapons domestically and then renounced them is South Africa. Ukraine, Belarus, and Kazakhstan had Russian warheads on their territory but surrendered them to Russia after the Soviet Union’s collapse.)

“If Trump thinks that he’s going to come back to the summit with Kim Jong-un’s nuclear weapons in the cargo hold of Air Force One, he’s delusional,” Cirincione said. “If he goes in prepared to have this be a breakthrough meeting that yields important concessions from Kim and is the start of a multi-year process toward denuclearization, then he might be able to pull off a stunningly successful summit.”

The experts also cautioned that the United States has to be willing to truly compromise with North Koreans as well. “Trump also needs to be realistic about the concept that this is a negotiation and North Korea’s going to want something from the United States in return,” Davenport said. She cited U.S. nuclear-capable airplanes taking part in military drills and the presence of nuclear-capable submarines as two areas in which Kim’s government wants to see real changes.

When asked what they think the chances are that the Trump administration might pull this off, both experts landed at the same number. “I’d put the odds right now at 50-50. I think there’s actually a 50 percent chance this unorthodox diplomacy could work,” Cirincione said.

“At this point, it is highly likely that the summit will take place, but the chances that Trump will be able to obtain a reasonable commitment from the North Koreans to take steps to freeze their nuclear missile program is 50/50,” Davenport concluded.

Cirincione in particular put much of his hopes in South Korea’s progressive new leader. “People have been grossly underestimating the role of South Korean President Moon Jae-in. He’s the one who has pushed this agenda and gotten us as close as we are,” he said, also alluding to his strategic use of flattery to persuade America’s leadership. “The South Koreans are handling this very well and all the while by the way deflecting praise to Donald Trump.”

Indeed, earlier this year, Moon singled out Trump for praise on the issue, saying “[He] made a huge contribution to make inter-Korean talks happen, [and] I’d like to express my gratitude.”

P.J. Crowley, former assistant secretary for public affairs and spokesperson for the State Department under the Obama administration, also stresses that U.S. negotiators must be pragmatic.

“It is unrealistic for us to expect North Korea to capitulate in one meeting. They have spent a lot of money to produce whatever weapons and missiles they have. So the president has to decide if they’re serious and if a lengthy negotiation will bear fruit,” he told The Intercept.