Why Do So Many Denounce Authoritarianism From Trump and Putin — but Not Israel’s Benjamin Netanyahu?

For years, Israeli human rights groups have faced repressive measures against their efforts to expose war crimes in the Occupied Territories. 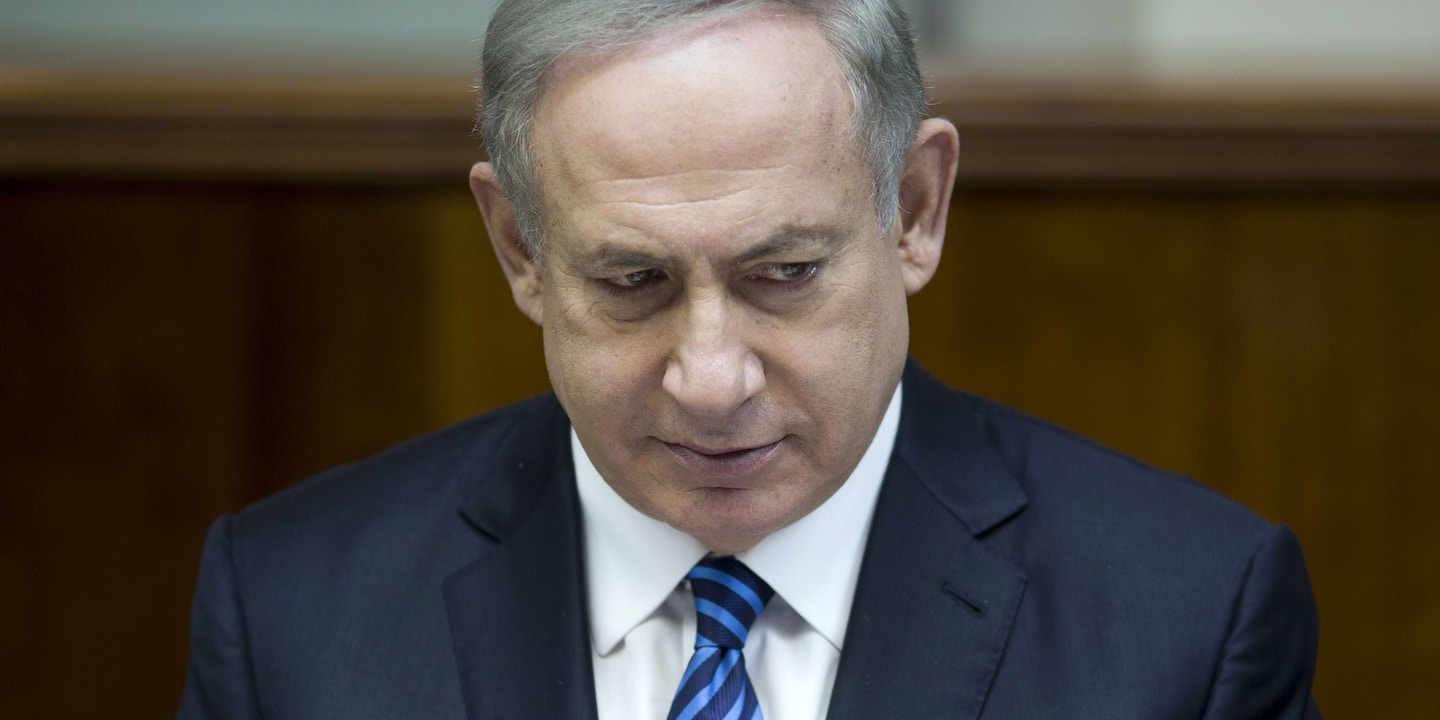 We hear a great deal from liberals in the West these days about the rise of authoritarian and illiberal governments across the world: from Putin’s Russia to Orbán’s Hungary; from Trump’s America to Erdogan’s Turkey; from Modi’s India to Duterte’s Philippines.

We don’t hear so much about Netanyahu’s Israel — despite the fact that the country, as former Israeli Foreign Minister Shlomo Ben-Ami has conceded, “is succumbing to its deepest ethnocentric impulses” and is “now well on its way to joining the growing club of illiberal democracies, and it has Prime Minister Benjamin Netanyahu to thank.”

Some might say “on its way” is an understatement. According to Hagai El-Ad, executive director of B’Tselem, the Israel Information Center for Human Rights in the Occupied Territories, the Jewish state could be considered a founding member of that particular club because it has enjoyed a “significant head start” on the rest. For example, the practice of “describing the opposition and specifically human rights organizations as traitors, and then also calling for their criminal investigation … may sound familiar to listeners from various countries … in which authoritarian governments are on the rise,” he tells me on the latest episode of Deconstructed, “but, hey, Israel has been there way before.”

Consider the array of “anti-democratic” laws that have been passed by the Knesset, Israel’s parliament, over the past decade; laws which have had a chilling effect on freedom of speech and expression. In 2011, there was the “Boycott Law,” which made any Israeli individual or organization that calls for a boycott against Israel liable to be sued for damages. There was also the “Nakba Law,” which authorized the Israeli finance ministry to cut state funding from institutions that reject Israel’s character as a “Jewish” state or mark the country’s Independence Day as a “day of mourning.” In 2015, there was the “NGO Law,” which targets foreign-funded human rights organizations inside Israel and was described by Meretz politician Mossi Raz as a “semi-fascistic law that harms democracy and silences dissent in a way that is reminiscent of Putin’s Russia.” (Of 27 organizations threatened by this law, 25 of them are left-wing or human rights groups.)

Then there is Israeli public opinion, in which the shift to the authoritarian and racist right has been remarkable in recent decades. According to polling by Pew, nearly half (48 percent) of Israeli Jews now support expelling Arabs from Israel, while the vast majority of them (79 percent) believe that they are entitled to deserve “preferential treatment” over non-Jewish minorities in Israel.

On Deconstructed, I also spoke to Avner Gvaryahu, a former paratrooper in the Israel Defense Forces who now serves as executive director of Breaking the Silence, an Israeli NGO that is “particularly reviled among right-wing Israelis” because it collects anonymous testimonies from Israeli army veterans about abuses they either committed or witnessed during their service in the Occupied Territories. According to Gvaryahu, the Israeli right has created “a toxic environment that I think will backlash in the future, but at this point, it’s pretty much destroying what’s left of the liberal values in our country.”

For making such provocative claims and exposing possible war crimes perpetrated by the IDF in the Occupied Territories, Gvaryahu, El-Ad, and their fellow human rights activists in Israel have not only been targeted by anti-democratic laws, but they have also been subjected to verbal abuse, harassment, and death threats. Senior members of the Israeli government have piled in, too. You think Donald Trump calling CNN “fake news” is bad? Netanyahu has attacked Breaking the Silence for spreading “lies and slanders [against] our soldiers around the world.” Defense Minister Avigdor Lieberman has accused members of B’Tselem and Breaking the Silence of being “complete traitors” who are funded by “those same foundations that fund Hamas.”

I asked Gvaryahu how he reacts to such vicious and personal attacks from the most senior officials in his country. “We sort of joke about this … amongst the members of Breaking the Silence: At what point did we become traitors? Was it … the first time we read a left-wing blogger as soldiers? Was it when we read … some book when we were guarding [Palestinian prisoners] that this idea popped into our head, and we started questioning what we’re doing — were we traitors then as well? When we shared our experiences coming back home, speaking to some of our family members — were we traitors then? Or did we only become traitors once we … [began] breaking our silence publicly?”

In recent weeks, IDF snipers have come under heavy criticism for shooting and killing dozens of unarmed Palestinian protesters, including children and journalists, at the border with Gaza. For Gvaryahu, “the truth of the matter is that there are soldiers who are probably on the border now who will be part of Breaking the Silence in the future. Are they already traitorous at this point?”

With El-Ad, Gvaryahu, and their organizations under constant attack from right-wing Israeli officials and news outlets, isn’t it shameful that leading liberals in the West aren’t speaking out in loud support of them? That they are so keen to denounce the illiberal and authoritarian behaviors of Trump or Vladimir Putin, but so willing to give Netanyahu a pass?

This current Israeli government — the most right-wing, anti-peace government in living memory — is bent on demonizing and delegitimizing its domestic critics, especially human rights activists and civil society groups. Freedom of speech and expression be damned!

Why? Because Jewish criticism of the Jewish state has always been harder to dismiss or ignore. Whether it was Albert Einstein and Hannah Arendt in the 1940s … or Natalie Portman earlier this month. The Israeli-American actress provoked uproar in Israel after refusing to attend an awards ceremony in Tel Aviv because she said she “did not want to appear as endorsing Benjamin Netanyahu” and objected to the “mistreatment of those suffering from today’s atrocities” in Israel.  And what was the response from the Israeli government? Cabinet Minister Yuval Steinitz claimed Portman’s boycott “bordered on anti-Semitism.”

Anyone who speaks out against the Israeli government’s repressive behavior, both inside and across the Green Line, must be silenced. That is now the authoritarian and ultranationalistic mentality that dominates not just inside the Netanyahu cabinet, but in the Knesset, too. Earlier this year, Israeli legislators gave initial approval to an amendment allowing the education ministry to ban organizations critical of the IDF from entering schools. Members of the Knesset explicitly singled out Breaking the Silence while debating the amendment.

Gvaryahu believes such a sweeping and draconian measure would be difficult to defend in the courts. “But more interestingly,” he tells me, “is even though this has been in discussion and there is pushback on schools that invite us, we’re still invited. We had this pretty amazing experience a few months ago where high school students invited us, and their principals were actually scared from the pushback. And they decided to cancel.”

Nevertheless, the Breaking the Silence boss continues, “the students themselves said, ‘You know what? We’re going to meet them in our own time, in our own home’ — 17-, 18-year-olds! Like, how do you motivate 17-, 18-year-olds in this time and age to do anything? And they, on their own time, out of school, said, ‘We’ll invite you.’”

Gvaryahu, therefore, says he is an optimist and has no plans to give up his campaign against Israel’s illegal occupation or human rights abuses anytime soon — no matter how much pressure is applied from above, and no matter how little support he gets from liberals in the West. The former soldier believes that he and his fellow activists can continue “breaking the silence” in front of more and more Israelis, especially younger ones. “They’re closing a door,” he tells me, “we’re going in through the window.”