“They’ve gone too far now,” says Jan Egeland, a former diplomat who helped broker the Oslo Peace Accord. “Decent people have to wake up.” 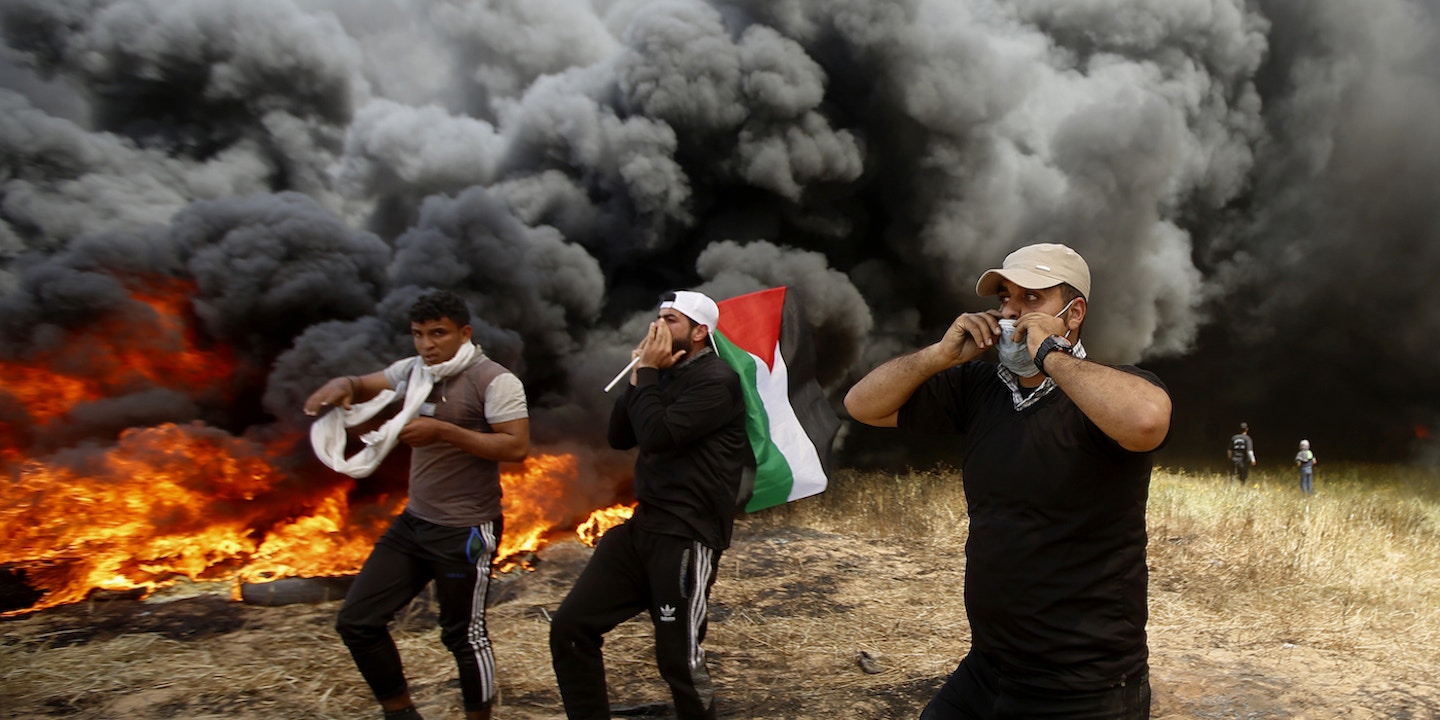 Senior Israeli officials declined on Thursday to offer any proof to substantiate their coordinated attack on the reputation of Yaser Murtaja, a Palestinian photojournalist who was shot and killed by an Israeli sniper last week while documenting protests in Gaza.

Israel has struggled for days to explain the killing of Murtaja, who was wearing a flak jacket clearly marked with the word “PRESS” when he was shot on Friday.

After his funeral on Saturday, a spokesperson for the Israel Defense Forces had insisted that Israeli snipers had not targeted Murtaja, or the five other Palestinian journalists who were injured by live fire.

Later on Saturday though, Israel’s defense minister, Avigdor Lieberman, suggested that Murtaja might have been killed because he was flying a drone over Israeli forces during the protests. However, video recorded moments before the shooting showed that Murtaja had been using a handheld stabilizer device to record images of the protesters, not a drone.

If Murtaja was not a target, however, his killing seemed to undermine claims by Israel’s military that its snipers had only fired live ammunition at “instigators” among the crowds of protesters in Gaza, in a “precise, measured way.”

Images of the photographer taken moments before he was shot showed that his final frames were of protesters separated from Israeli forces by a thick wall of black smoke generated by burning tires. Moments before he was shot on Friday, photographer Yaser Murtaja, wearing a flak jacket and blue helmet, was filming protesters in Gaza.

Those images suggest that Israeli forces might have been firing without precise aim, through a smokescreen, in the general direction of protesters and journalists.

Unlike some of the other unarmed Gazans killed during the recent wave of protests who had militant backgrounds, Murtaja was a well-known photographer and cameraperson who had worked for international news organizations, aid groups, and the Chinese artist Ai Weiwei. Just last month, Murtaja had even been vetted and cleared by the State Department to receive a USAID grant of $11,700 to purchase equipment for his company, Ain Media. (As the Congressional Research Service notes, “USAID’s West Bank and Gaza program is subject to a specialized vetting process … to ensure that funds are not diverted to Hamas or other organizations classified as terrorist groups by the U.S. government.”)

Murtaja was described by colleagues in Gaza as a dedicated professional with no known political affiliation or ties to Hamas, the militant group that rules the Palestinian enclave. In 2015, the Palestinian Journalists’ Syndicate even made a public complaint on his behalf when Murtaja and three colleagues were detained and beaten by Hamas militants for recording the clearing of rubble in Gaza City that had been destroyed in Israeli bombing the year before.

Four days after his killing, Israel’s defense minister offered a completely new rationale. In response to a question about the killing at a news conference, Lieberman claimed, without citing any evidence, that Murtaja had been a member of Hamas. Lieberman’s unsubstantiated claim was quickly shared on social networks by Prime Minister Benjamin Netanyahu’s spokespeople, Ofir Gendelman and David Keyes, and then repeated as fact by senior diplomats.

The photographer (#YasserMurtaja) was a terrorist with a prior association w/ the military wing of Hamas. He held the rank of captain & was paid regularly by Hamas since 2011.

He used to fly drones to collect intel on IDF forces at the front. pic.twitter.com/zGLfDdYzpr

Turns out the "photographer" killed in Gaza was an officer in Hamas, a terrorist org that seeks Israel's destruction. On Hamas' payroll since 2011. Used his drone to collect intel on Israeli positions. Countless reporters called him a "journalist." Will they correct the record?

The image used to illustrate this claim about Murtaja was his own Facebook cover photo, showing him with the camera drone he took such joy in using to photograph the natural beauty of Gaza.

None of the Israeli officials responded to requests from news organizations, including The Intercept, to present evidence to back their claims, which contrast sharply with what was previously known about the photographer.

To make matters more confusing still, the same morning the allegation first surfaced that Murtaja had been a secret Hamas militant, a spokesperson for the Israel Defense Forces told Britain’s Daily Telegraph, “We are not aware of any such information.”

In an email to The Intercept, Lieberman sent a statement in which he ignored questions about evidence and simply reiterated his claim. “Regarding the photographer, I said the photographer, as you asked, is a terrorist with a prior association with the military arm of Hamas,” the defense minister wrote. “I hope those same journalists and media outlets that were so outraged and spoke about the poor journalist just faithfully doing his job publish the correct facts.”

As the Telegraph correspondent Raf Sanchez observed on Twitter, Israel’s defense ministry and prime minister’s office “are trying to get reporters to republish their claims (presented without evidence) that Yaser Murtaja was a Hamas member. But they still won’t answer the most basic question: did the IDF kill him deliberately?”

After multiple requests for comment went unanswered, Lt. Col. Jonathan Conricus, a spokesman for the Israel Defense Forces, contacted The Intercept after this post was originally published to say that the army now agrees with their boss, the defense minister, and said unspecified intelligence showed that the photographer was a member of Hamas. The spokesman refused to say if the army’s position on whether or not Murtaja was intentionally targeted had changed. “We’re still looking into how he was killed,” the spokesman said, “we may release intelligence in the future.”

Murtaja’s brother, Mutasim, accused the Israeli defense minister of lying. “He spreads lies to get himself out of the impasse” he told the Associated Press. “Yasser was filming the protests with simple cameras to show they are peaceful.”

Last week, Murtaja had agreed to make a documentary for the Norwegian Refugee Council about the hardship faced by the majority of Gaza’s 2 million residents who are refugees, displaced from their homes inside what is now Israel by violence before and after the founding of the Jewish state in 1948.

Jan Egeland, a former diplomat who helped broker the 1993 Oslo Peace Accord and now leads the NRC, tried to push back against the Israeli allegations on Twitter.

Wonderful Gaza journalist YasserMurtaja was assaulted by Hamas in 2015, vetted by US Govt for aid, killed when reporting by Israeli sniper, then smeared by Defense Minister Lierberman, @ngomonitor & Israeli Diplomat. This isn't the Israel I used to admire. @GeraldNGOM @RafiSchutz https://t.co/B08RWf0asA

Egeland denounced the attack on the dead man’s reputation in a telephone interview with The Intercept as “a smear campaign” against a journalist who had “encountered countless problems with Hamas.”

“There is nothing in this,” Egeland said. “This is like character assassination of a very good man who was killed by an Israeli sniper. This is too much, really.”

“Personally, I’ve been a friend of Israel since I came there the first time at the age of 19,” the former Norwegian Labor Party politician said. “I studied at the Truman Peace Research Institute at the Hebrew University; I worked with Prime Minister Rabin; with Foreign Minister Peres; I facilitated the Oslo agreements between Israel and the PLO. And I think: What happened to the Israel that I admired, that I liked, that I loved?”

Egeland also said that he was among those who want to help Israel and despairs over the way the current government works with “attack dogs,” like those at the pro-Israel group NGO Monitor which, he said, is dedicated to “smearing good organizations and taking down, now also NRC, an organization that was shut down for a while by Hamas in Gaza.”

“They’ve gone too far now — I think Lieberman went too far in this,” he concluded. “Decent people have to wake up.”

Raphael Schutz, Israel’s ambassador to Norway, responded to Egeland’s outrage over the killing of Murtaja by pointing on Twitter to a report in the Israeli press that once again uncritically repeated the claim that he was in Hamas, source only to “unnamed defense officials.”

Asked on Thursday how he knew that this claim about Murtaja was true, Schutz told The Intercept that he was merely echoing the statements of the defense minister and one of the prime minister’s spokespeople quoted in the Israeli media. “My comments were based upon what they published,” he said. Pressed to say if he knew of any intelligence that would support these claims, Schutz said, “No, basically not. I took what they published and based my comment upon that.”

Schutz did, however, take issue with Egeland’s comments that he and other Israeli officials were engaged in a smear campaign by repeating the unsubstantiated claim. “I can’t say that I’m surprised,” Schutz said. “Under the pretext of protecting human rights, it’s not news that Mr. Egeland and his organization long ago have politicized the issue and are active participants in anti-Israeli campaigns.”

Top photo: Palestinian protesters burned tires in Gaza on Friday to create a protective smokescreen between them and Israeli snipers, near where Yaser Murtaja was shot.

This post was updated to add a comment from a spokesperson for the Israel Defense Forces received after publication.