Seeing Gaza Through the Lens of Yaser Murtaja, a Palestinian Journalist Killed by Israel

Israel’s defense minister falsely claimed that a Palestinian photographer was using a drone when he was shot by an Israeli sniper. Yaser Murtaja, a Palestinian photojournalist, was one of nine civilians killed by Israeli snipers on Friday in Gaza, but his death was perhaps the clearest rebuke to Israel’s official position that its sharpshooters have only fired live ammunition at “instigators” among the crowds of protesters, in a “precise, measured way” to protect Israelis on the other side of the perimeter fence.

That’s because images taken by Murtaja’s colleagues covering the protest, moments before and after he was shot, show that he was wearing a blue flak jacket clearly marked with the word “PRESS” in capital letters on a white background across his chest. The bullet apparently entered his abdomen through a small opening at the side of the jacket, just inches away from the word that should have protected him from being targeted.

Sources in Gaza have confirmed that journalist Yaser Murtaja has died after being shot in the abdomen by an Israeli sniper while covering the protests. He was clearly wearing a vest that identified him as press. Rest in peace. pic.twitter.com/oKLSBhXiUk

The shooting of Murtaja can be explained in only two ways: Either the Israeli sniper could not clearly see who was in the rifle scope — in which case the claim that the use of live fire is precise is shown to be untrue — or the soldier intentionally fired at a journalist, which is a war crime.

After Murtaja’s body was removed from a hospital in Gaza on Saturday, with the flak jacket draped across him, Washington Post correspondent Loveday Morris reported that one of the photographer’s last posts on Facebook was an image of Gaza City’s port taken from overhead by drone. It was accompanied by the caption: “I wish that the day would come to take this shot when I’m in the air and not on the ground. My name is Yaser Murtaja. I’m 30 years old. I live in Gaza City. I’ve never traveled!”

A week later, Murtaja posted another aerial image on Facebook, showing an overhead view of a Gaza protest camp on March 30, the first day of what the Palestinian organizers call the “Great Return March,” a series of demonstrations near the perimeter fence that confines them, called to insist on their right to return to the homes that their families were driven from or fled inside what is now Israel.

In tribute to Murtaja, the Norwegian Refugee Council, which had hired him “to document for NRC the bitter prolonged struggle faced by Palestinian refugees in Gaza,” released video shot by the photographer, from the air and the ground, of that first, bloody day of protests two weeks ago, when the Israel Defense Forces killed at least 15 unarmed protesters.

Jan Egeland, the refugee council’s secretary general, said in a statement: “Yaser Murtaja was a civilian and a journalist who was wearing clear press identification while he was filming the demonstrations at the Gaza fence with Israel. He was there because he wanted to document civilians exercising their right to peacefully protest.”

The fact that Murtaja, who died without ever having been able to leave Gaza, had used a drone to photograph his home from the sky and shared those images on social media, struck many who sympathize with the 2 million Palestinians who are confined to the territory by Israel and Egypt as touching.

Video of Gaza at sunset posted on YouTube in February by Yaser Murtaja.

Israel’s defense minister, however, saw something else in the news that Murtaja had a drone — an opportunity to blame him for his own death. “Anyone who operates drones over Israeli soldiers needs to understand he’s putting himself at risk,” Defense Minister Avigdor Lieberman said on Saturday.

Leaving aside the fact that there is no evidence that Murtaja ever flew a drone over Israeli soldiers or territory, it was clear that he was not doing so when he was shot on Friday.

Yaser Murtaja did not use the drone at the day he was killed and he was wearing the vest having the press signs pic.twitter.com/T5Fc9Qngh6

Photographs and video posted online show that he was, instead, shooting handheld images using a DJI Ronin, a steady-cam device he had proudly displayed in an Instagram video in 2016.

The same company makes the Phantom camera drone that Murtaja indicated he used to take images over Gaza for his company, Ain Media.

Had Murtaja been using a drone to photograph the protest on Friday, it is also unclear how, exactly, Lieberman thinks the Israeli military on the other side of the barrier could have identified him as the person controlling it.

Israel’s military, which was described by the defense minister as “the most moral army in the world,” has promised to investigate the killing of Murtaja, and the wounding of four more journalists who were covering the protests in Gaza on Friday. The army also said on Monday that it will examine disturbing video posted online the previous day, which appears to show Israeli soldiers cheering as one of their snipers shot a Palestinian posing no threat, across the perimeter fence in Gaza.

A military spokesperson told Haaretz that the video was not new, but had been recorded several months ago. On the video’s soundtrack, according to a translation from the Israeli newspaper, a soldier is heard urging a colleague to fire across the barrier at three Palestinians. Another voice then says, “I can’t see because of the wire” and adds, “There’s a little boy there.”

After the sniper then fires and hits a figure in the distance, the other soldiers cheer, and one can be heard boasting that he caught the whole thing on video.

The soundtrack also records soldiers saying, “Wow, someone was hit in the head,” “What a legendary video,” and “He flew in the air.”

Israel’s claim that its own civilians are in mortal peril from the protests inside Gaza was also undercut by images shot during the protests on Friday by journalists on the Israeli side of the fence.

Video recorded by Piotr Smolar, a correspondent for Le Monde, shows that the protests scarcely disturbed the tranquillity on Israeli farmland at Nahal Oz, a community adjacent to Gaza City.

Photographs of young Israelis watching Friday’s protests in Gaza from a tower in Nahal Oz appeared to show that they observed the chaos with little concern for their own safety. 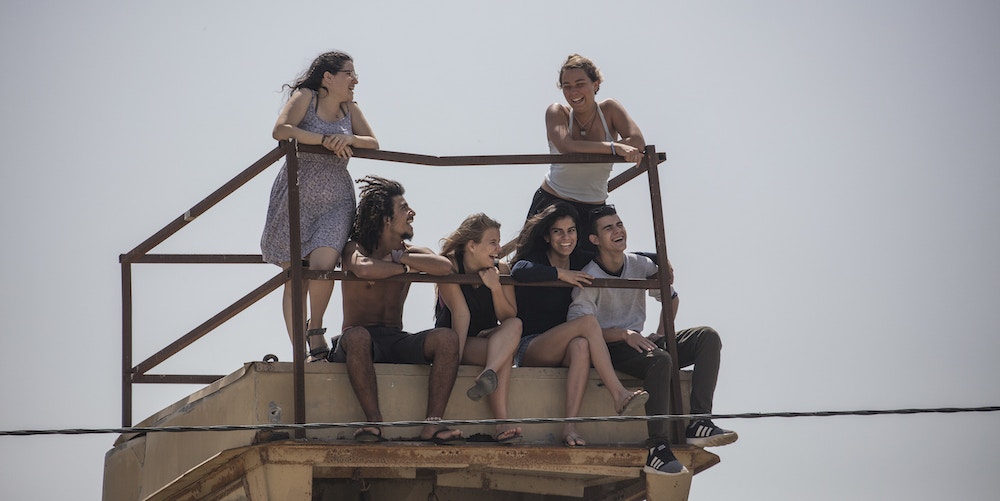 Young Israelis watched the protests in Gaza from a tower in Nahal Oz on Friday.

Top photo: Mourners carried the body of Palestinian photojournalist Yaser Murtaja for burial on Saturday, the day after he was fatally shot by an Israeli sniper while covering protests in Gaza.