Israeli forces killed at least 15 unarmed Palestinian protesters in Gaza, as tens of thousands demonstrated for their rights near Israel’s security fence. 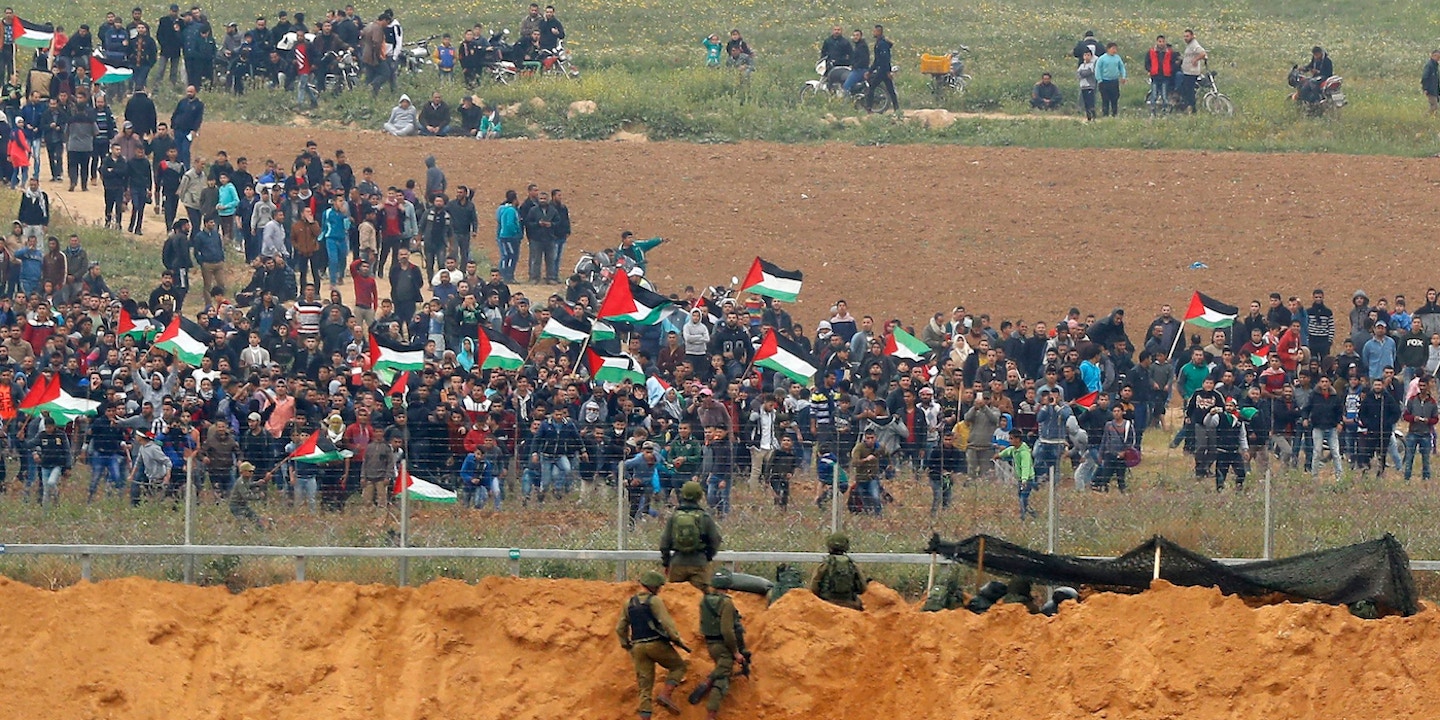 Israeli snipers killed at least 15 Palestinian protesters in Gaza on Friday, and injured hundreds more with live fire, as up to 50,000 residents of the besieged enclave answered an activist’s call to embrace civil disobedience by demonstrating close to the border fence, an area defined by the Israeli Defense Forces as a closed military zone.

Video of Israeli marksmen shooting unarmed protesters, including at least one young man who was engaged in prayer at the time, appalled observers from both communities.

Unarmed , no stones , no aggressive move , but still he was shot by an #Israeli army sniper in #Gaza today . #GreatReturnMarch pic.twitter.com/gGnxlzyCHA

The IDF's gonna have a hard time saying this guy fell off his bike... pic.twitter.com/BCkC5KrOWi

The fatal shooting of one victim, a boy in a black shirt who was identified later as Abdul Fattah Abdul Nabi, 19, stirred particular outrage, because video recorded from three different camera angles showed that he was clearly unarmed and moving away from the border fence when he was gunned down.

Disgusting and awful..
Moments of killing a Palestinian young man in cold blood by an Israeli Zionists snipers at #Gaza strip borders during the peaceful protests of #GreatReturnMarch , i was there we were protesting peacefully and Israeli were shooting directly toward us !! pic.twitter.com/h5ydVRRqhf

The unarmed protesters had rallied to demand an end to Israel’s decade-long blockade of the Palestinian territory, as well as the recognition of the right of refugees who fled there in 1948 to return, with their children and grandchildren, to their homes inside what is now the Jewish state.

This picture is striking.

Home, for the Palestinians refugees in the foreground, is just on the horizon. In between, the Israeli army that wants to make sure they never get there. pic.twitter.com/m5AN0UOyU9

Palestinian is evacuated during clashes with Israeli troops, during a tent city protest along the Israel border with Gaza, demanding the right to return to their homeland pic.twitter.com/SXzss6nW2l

The security threat to Israel is Palestinian memory and insistence on return, refusal to assimilate into other countries but to exist as Palestinians. That is why Palestinians are always already presumed guilty #GreatReturnMarch

According to plans first sketched out on Facebook by the independent Gazan activist Ahmed Abu Artema, the rally on Friday marked the start of a six-week campaign called “The Great Return March,” intended to culminate on May 15, when Israel celebrates its 70th birthday and Palestinians mourn the Nakba, or “catastrophe,” in which hundreds of thousands of people were driven from what became the state of Israel.

shows Palestinians marching past a tent city erected along the border with Israel east of Gaza City in the Gaza strip to commemorate Land Day. Land Day marks the killing of six Arab Israelis during 1976 demonstrations against Israeli confiscations of Arab land. pic.twitter.com/C39cnixn4m

As part of the campaign, the writer Enas Fares Ghannam explained on the Gazan website We Are Not Numbers, “Palestinian refugees living in Gaza will set up tents near the border and move gradually — and peacefully — closer.”

Shujaiya: Most of these Palestinians have never been this close to their original villages or towns destroyed/depopulated by terrorist Jewish militias before and after 1948.#GreatReturnMarch pic.twitter.com/IxTT4vvWxM

Although the Israeli military had deployed snipers along the fence and declared plans to use live ammunition against what it described, in advance, as “violent riots planned throughout the Gaza Strip,” Palestinians were dismayed by reports in the Israeli and international press calling the use of deadly force against unarmed demonstrators the result of “clashes.” Witnesses insisted that while some rocks were hurled in the direction of the border fence during the day, Israeli forces had initiated the violence.

Fuck all biased news. No clashes happened, it started very peaceful, Palestinians didn't even throw rocks, they only held flags. #Israel troops & snipers were all over & started attacking. #GreatReturnMarch #Gaza

Live scenes from the violent Palestinian confrontations Israeli and Western media are referring to pic.twitter.com/YLXNJTo4P5

“Clashes” is a word pro-Israel media use to whitewash the reality that Israel is shooting dead unarmed civilians in cold blood for doing nothing other than demonstrating for their rights. “Clashes” fraudulently suggests equal power and responsibility. https://t.co/1r8eMkKvYw

16 people killed and 1416 injured in #Gaza yesterday. Imagine if those were Israeli, i think Gaza would've been turned into rubble. But no one is going to hold israel responsible #LandDayMassacre #GreatReturnMarch #FreePalestine #israelIsanApartheidState

Video and photographs posted from the scene online suggested that shots had been fired at protesters who were some distance from the fence.

One Palestinian photographer, Walid Mahmoud Rouk, argued that live video of the demonstration he streamed to Facebook throughout the day proved that peaceful protesters had been attacked without cause.

Despite these firsthand accounts, responsibility for the violence was put squarely on the Palestinians by outlets like Fox News, which assured viewers in Mar-a-Lago and elsewhere that Israeli troops had been attacked.

Israel’s use of live ammunition against unarmed civilians came after the planned protest had been denounced by Jason Greenblatt, the Trump Organization lawyer sent by the president to negotiate an end to the Israeli-Palestinian conflict. Writing on Twitter the night before the rally, Greenblatt described the planned demonstration as a “hostile march,” and falsely accused the organizers of being members of Hamas, the militant group that rules Gaza.

Hamas is encouraging a hostile march on the Israel-Gaza border. Hamas should focus on desperately needed improvements to the lives of Palestinians in Gaza instead of inciting violence against Israel that only increases hardship & undermines chances for peace.

While Hamas officials had promoted plans for the march and encouraged members to take part, it began on the Facebook page of Artema, a political independent whose family is originally from the city of Ramle, now in central Israel.

Greenblatt’s comments, distorting the character of the protest, appeared almost identical to social media propaganda released by the Israeli military.

Hamas tells the world about a peacful protest, it should be called a violent riot pic.twitter.com/RFjEP1dBnL

After the attack on the protesters, an Israeli military video posted online to prove that there were “violent riots,” showed just nine rocks being hurled in the direction of its soldiers, and three fires burning.

Hamas has everything to gain and Palestinian civilians have everything to lose in riots like the one that happened yesterday pic.twitter.com/AGSq3Wg5RS

There was no indication of whether the video was shot before or after snipers opened fire on the crowds, and the images were released without sound, making it impossible to say if the protesters were under fire when they hurled the rocks.

The American envoy’s remarks contrasted sharply with comments made by former Secretary of State John Kerry last year, in which he seemed to predict that Israel might soon be confronted with the mass civil disobedience and the spectacle of “40,000 kids marching up to the wall every day with signs saying ‘give us our rights.'”

In a warning to Netanyahu a few years ago, Kerry asked what Israel would do if it was confronted by thousands of unarmed Palestinians marching and demanding their rights. Today we are getting the Israeli answer.

The violence did shock the conscience of some Israelis. B’Tselem, an Israeli human rights group, denounced the Israeli military’s “manifestly illegal” use of deadly force against the protesters.

The Israeli-American journalist Mairav Zonszein observed bitterly that such a display of deadly force was particularly galling on the eve of the Jewish holiday of Passover.

I'd say Happy Passover, but our snipers and tanks are currently sitting behind super-secure border fences, using live fire to cut down unarmed demonstrators trying to walk out of bondage. #Gaza #GreatReturnMarch

Ayman Odeh, who leads the Joint List, an alliance of Arab parties in Israel’s parliament, condemned the violence in a Twitter message written in Hebrew.

“On the Jewish festival of freedom of all days, the residents of the world’s largest prison are asking to live,” Odeh wrote. “Men, women, and children, residents of Gaza, are marching to demand their freedom, facing off against indifference and cruelty. From Israel’s perspective, there is no legitimate form of Palestinian protest. Even such a model of nonviolent popular struggle is met with armed soldiers who do not hesitate to fire at unarmed demonstrators.”

Adalah, The Legal Center for Arab Minority Rights in Israel, also deplored the Israeli attack on the protesters. “Live gunfire on unarmed civilians constitutes a brutal violation of the international legal obligation to distinguish between civilians and combatants,” the rights group said in a statement. “Adalah will call for an investigation into those responsible for today’s deadly incident in Gaza and will demand that those found responsible for the killings be brought to justice.”

As funerals for those killed at the demonstrations on Friday began, Hamas said in a statement that five of the 15 victims had been members of its armed wing.

Supporters of Israel greeted that news as confirmation that the use of force had been fully justified. To Palestinians, however, it only underlined the bitter irony that even when they take part in unarmed resistance to the Israeli occupation, their young men are still considered combatants.

This piece was updated with more video of unarmed Palestinian protesters being shot by Israeli snipers in Gaza on Friday, a revised death toll, and statements from rights groups, Israel’s military, and Hamas.

Top photo: A view of Palestinian protesters near Israel’s perimeter fence around Gaza, as seen from the southern Israeli kibbutz of Nahal.