An Israeli military court extended the detention of Ahed Tamimi, who has become the face of Palestinian resistance to Israel’s occupation of the West Bank. 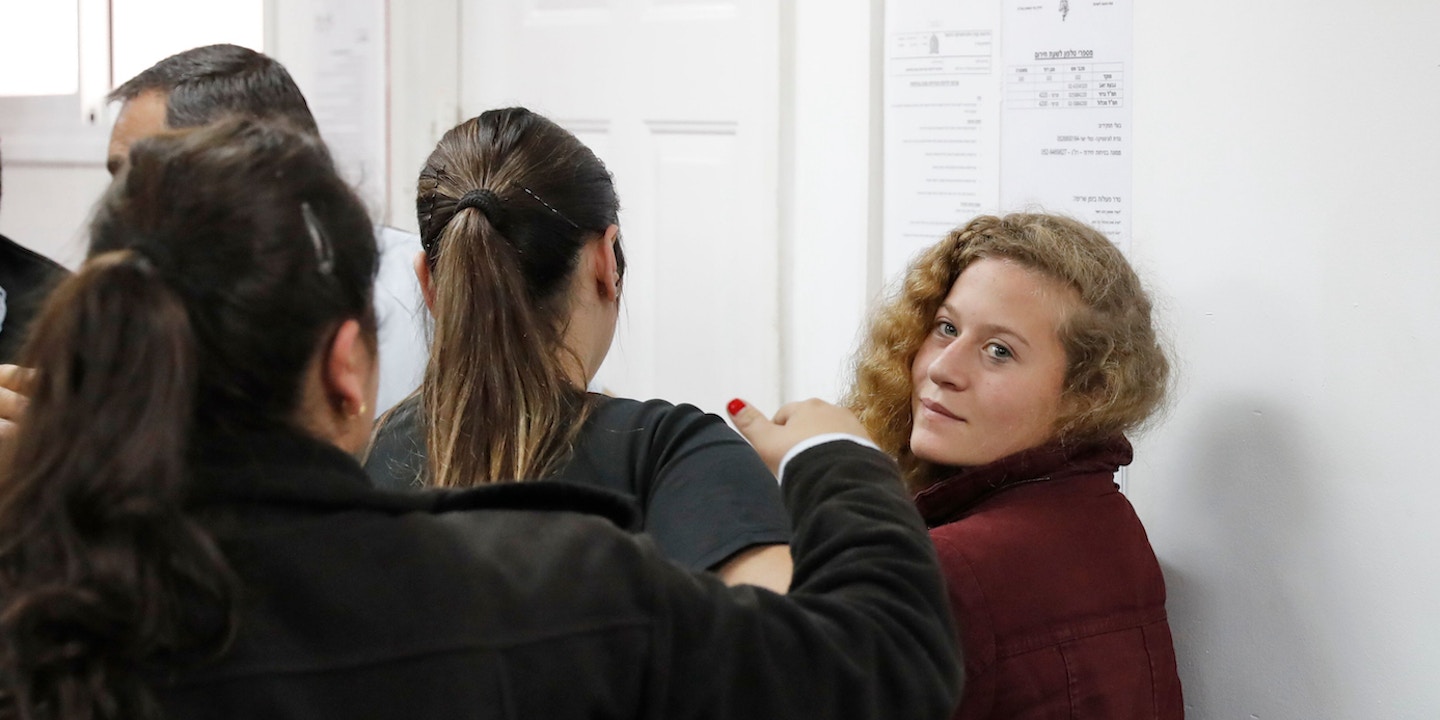 On Wednesday, an Israeli military court extended the detention of Ahed Tamimi, a 16-year-old girl who has become the face of Palestinian resistance to Israel’s military occupation of the West Bank for many who follow the weekly protests in her village through social media.

The girl was arrested in an overnight raid of her family’s home in the village of Nabi Saleh early Monday.

Israeli Army parades a 16 year old Palestinian girl arrested from home in #NabiSaleh at 4 am this morning. Just when you thought the occupation couldn't get more grotesque.. https://t.co/x1pRkmXc91

The arrest, and images of the less-than-daring raid released by the Israeli police to broadcasters, appeared to be an effort to placate far-right Israelis who were angered by video recorded last Friday, as the Palestinian teenager and a female cousin forced two heavily armed Israeli soldiers from her front yard, slapping and kicking them.

Remember Ahed Tamimi who kicked out two IOF soldiers that wanted to break into her house in Nabi Saleh village in #Ramallah? Ahed and her mother were kidnapped from their house today in a predawn raid. pic.twitter.com/0l4iy11O7I

The outrage was stoked by Israelis, who claimed that the confrontation with the soldiers had been staged to generate sympathy and made no mention of the fact that the incident took place after an Israeli soldier shot Ahed’s 15-year-old cousin in the head with a rubber-coated metal bullet during a demonstration against the ongoing military occupation. The girl’s father, Bassem, told the Israeli newspaper Haaretz that his daughter, who will be 17 in January, was angry because her cousin Mohammed had been shot, and it was unclear at the time if he would survive. (Over the weekend, doctors removed the bullet from the boy’s skull and he was placed in a medically induced coma.)

Israeli solider shoots a boy in the head and puts him in a coma. No charges

A Palestinian teen relative swats at an armed occupier after her cousin was shot in the head, Israel calls it a crime against humanity and arrests the whole family

Video of the incident had been widely shared over the weekend on social networks by Israelis who variously expressed pride in the “quiet restraint” shown by the soldiers and outrage that they appeared to have been bullied by a girl.

Say what you will about Israel’s army, the IDF – I don’t think there’s another military, anywhere in the world, whose soldiers and officers would respond to being slapped, shoved, kicked, punched, and screamed at with such quiet restraint. pic.twitter.com/PVQHueD94o

As Palestinian activists noted, however, that reading of the incident ignores the fact that the soldiers were on the family’s property, in an area that has been under military occupation for more than half a century.

Come again? The fully armed soldier is in their backyard. The young girl is shouting "don't touch me" and "get out" https://t.co/bLHKJapa4O

Anyone justifying Israel’s kidnapping of 16 year old Ahed al Tamimi because she smacked an armed to the teeth soldier answer this for me; why the fuck was that soldier on her front yard?

One copy of the clip posted on Facebook by far-right rapper Yoav Eliasi, known to his fans as The Shadow, was viewed more than a million times, along with his caption decrying the supposed “impotence” of Israel’s “castrated army.”

As the Haaretz correspondent Anshel Pfeffer observed following the girl’s arrest, “What no one could explain was why, if indeed there was a valid reason to apprehend her, was she not taken into custody on Friday? Unless, that is, the real charge against her is having made Israeli soldiers look impotent on camera.”

Israelis who are critical of the occupation voiced their support for the young political prisoner.

I empathize with IDF soldiers, whose government put them in an impossible situation,

I have endless admiration for Ahed Tamimi, 16 yrs old and under arrest for her courage in resisting occupation. A slap is not a war crime - we Israelis have "earned" the right to be humiliated. https://t.co/xPBfpr8TVU

It is stunning to me how much more triggered people are by a teenage girl slapping an occupying soldier outside her home than they are by the army that soldier belongs to murdering, shooting and kidnapping the same teenage girl’s relatives

Ahed Tamimi has long been a symbol of Palestinian resistance to the occupation and she's only 16. She was arrested this morning. Here she is at age 11 trying to prevent soldiers from taking her brother. More: https://t.co/ol4gwM15c4 pic.twitter.com/xfuRNB0ygV

The uproar over the incident in Israel was caused, in part, by simmering anger at the success her parents, Bassem and Nariman Tamimi, have had in drawing attention to the Israeli occupation by using social media to document the weekly protests they have led in Nabi Saleh since 2009.

As Ben Ehrenreich explained in a New York Times Magazine profile of the family, Ahed became first became a viral sensation in 2012, when she was caught on camera shaking her fist at an Israeli soldier, demanding to know why her brother had been detained at a protest.

The Internet took over: video of the tiny, bare-armed blond girl facing down a soldier went viral. She and Nariman were invited to Istanbul, where, to their surprise, Nariman said, they were greeted at the airport by dozens of children wearing T-shirts printed with Ahed’s photo. They drove past billboards displaying Ahed’s image. Reporters followed them everywhere. Crowds gathered when they walked in the streets. They were taken to Prime Minister Recep Tayyip Erdogan in the southeastern city of Urfa, Nariman said, and flew back with him to Istanbul on his plane.

Not everyone reacted so enthusiastically. One right-wing blogger dubbed Ahed “Shirley Temper.” The Israeli news site Ynet took the images as evidence that “Palestinian protesters use children to needle I.D.F. soldiers in the hope of provoking a violent response.”

A similar debate erupted two years ago, when images of Ahed biting the finger of an Israeli soldier who had her younger brother in a headlock went viral.

Israelis who defend the ongoing occupation of the West Bank — and the illegal, Jewish-only settlements there that soldiers are deployed to guard — tried again to blame the girl’s parents for her arrest this week, by claiming that her distress at living under military rule was somehow an act.

From the producers who brought you "I Only Scream When the Camera are Rolling", here is #Palestinian teen actress 'Ahed Tamimi.' #FakeTamimi #Pallywood pic.twitter.com/43jhls9Bqd

The girl’s supporters, however, argued that she and her family have every right to use social media to document the impact of Israel’s military rule on their lives, and on those of millions of Palestinians who are denied basic civil rights.

Despite official calls for Palestinians to commit themselves to unarmed struggle, Israel’s leaders appear deeply unsettled by the protest movement led by the Tamimi family in Nabi Saleh. Education Minister Naftali Bennett told Israel’s Army Radio on Tuesday that the young women filmed slapping the soldiers “should finish their lives in prison.”

When Ahed’s mother Nariman went to the Israeli police station where her daughter was being held, she, too, was arrested.

Israeli forces arrest the mother of 16 year old Ahed Tamimi when she went to see her daughter at the police station. Legally, a minor cannot be interrogated without a guardian present. What happens when they arrest the parent for trying to ensure her daughter's basic rights?

The Israeli military court that extended Ahed Tamimi’s detention on Wednesday also informed her father Bassem that he is now under investigation as well and subject to arrest. Still, the activist said after the hearing, he is proud of his daughter and his family is determined to continue their protests.

“We believe that this is our way and our duty and responsibility,” Tamimi said, “to resist until we end the occupation.”

Top Photo: Palestinian activist Ahed Tamimi, 16, looked back at the camera during a hearing at the Israeli Ofer prison in the West Bank village of Betunia on Wednesday.