Ahed Tamimi was sentenced to eight months in jail for slapping an Israeli soldier. Her mother will also be jailed for broadcasting the confrontation online. 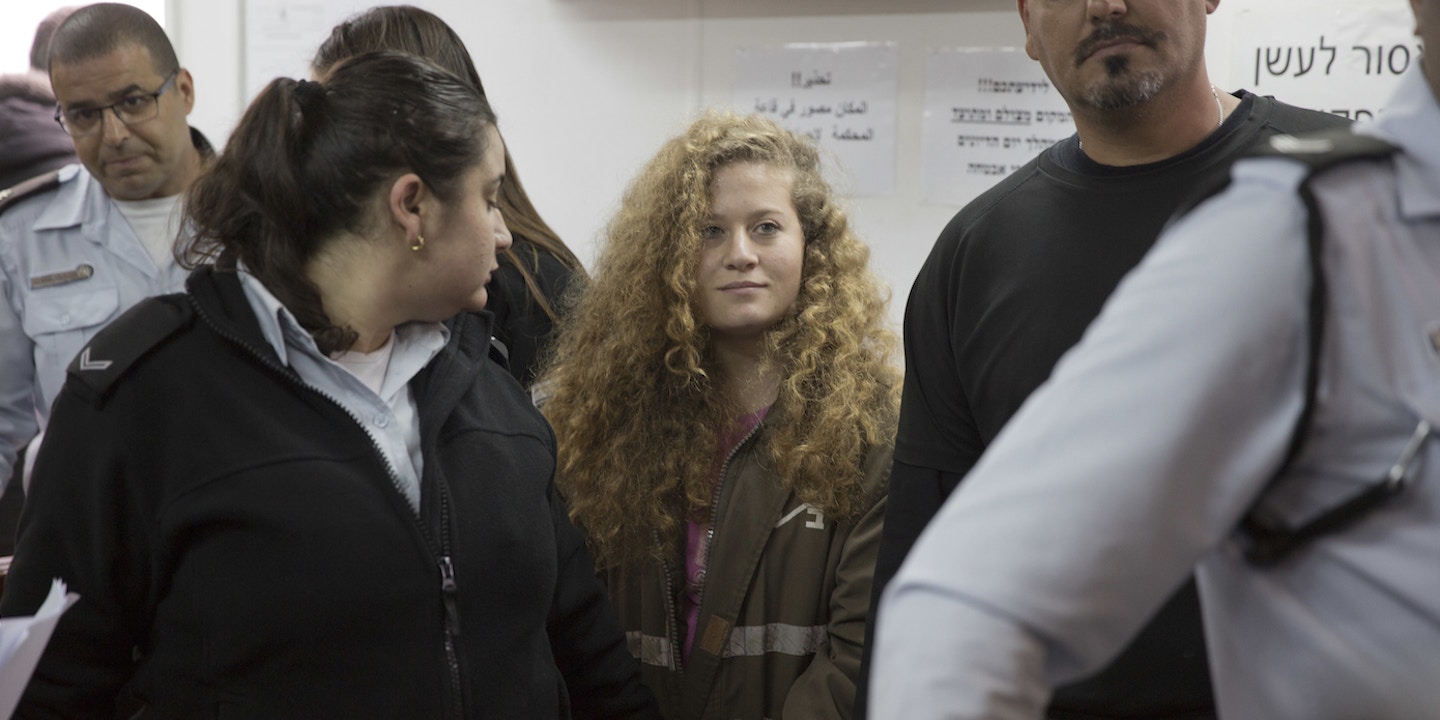 An Israeli military court sentenced Ahed Tamimi, a teenage Palestinian activist, to eight months in jail on Wednesday for slapping an Israeli soldier during a confrontation outside her family home in the occupied West Bank that was streamed live on Facebook. The girl’s mother, Nariman, was convicted of incitement for sharing the recording online, and also sentenced to eight months in prison.

The video, viewed millions of times on social networks, prompted an outcry from the Israeli public at the supposed humiliation of a heavily armed soldier, tasked with enforcing his nation’s military rule over Palestinian civilians in the occupied West Bank, backing away from a physical confrontation with a 16-year-old girl.

The mother and daughter have both been held in pretrial detention since December.

Gaby Lasky, the Tamimis’s lawyer, told the Israeli magazine +972 in January that even charging Ahed’s mother with incitement for her live video broadcast was “very dangerous for freedom of the press.” Nariman had begun filming the soldier and a colleague standing in her family’s backyard several minutes before her daughter and a cousin approached them and tried to shove the Israelis off the property.

The ruling could have a chilling effect not just on journalists, but also on Palestinian activists who routinely record their encounters with Israeli troops, both to document abuses and to provide a measure of accountability. Several years ago, the Israeli rights group B’Tselem, which works to monitor the day-to-day reality of the occupation many Israelis ignore, provided cameras to Nariman Tamimi and another relative in the village of Nabi Saleh.

Such videos have drawn international attention to Israel’s ongoing occupation and prompted conspiracy theories among far-right Israelis who maintain that every unflattering glimpse of daily realities in the occupied West Bank must be, somehow, staged for the cameras by Palestinians. After Ahed’s arrest, Israel’s former ambassador to the United States, Michael Oren, admitted that he had even conducted a secret investigation into claims that the Tamimis are not a real family, but a troupe of actors paid to pretend that the occupation of their land upsets them.

Ahed told the court that her anger at the soldiers was motivated not by her mother’s camera, but the fact that their unit had just shot her 15-year-old cousin Mohammed in the head during a protest.

Israeli military courts have reportedly charged dozens of young Palestinians with incitement based on their Facebook posts in the past three years. On Thursday, another young woman, Yasmin Abu Srur from Bethlehem, was reportedly sentenced to seven months in jail for a Facebook post.

The sentences were announced after the Tamimis accepted a plea deal to avoid spending even more time in detention during drawn-out legal proceedings. According to a new report from B’Tselem, Israel’s military court system has a nearly 100 percent conviction rate in large part because Palestinian defendants, particularly children, often agree to plead guilty after lengthy periods of pretrial detention. Ahed turned 17 during her time in custody.

The judge is now contemplating the decision for Ahed Tamimi. At the end of the first session of the hearing Ahed said "there is no justice under occupation." #Palestine

WATCH: This is how 17-year-old Ahed Tamimi responded when asked how she felt about her sentencing during her trial today. She and her mother Nariman were both sentenced to 8 months in Israeli prison. Her cousin Nour was sentenced to 5 months. pic.twitter.com/4F8rR5Y1P0

Asaf Ronel, an editor at the Israeli newspaper Haaretz, observed that Ahed Tamimi’s prison sentence — for an “assault” that consisted of slaps, kicks, and punches that inflicted no apparent wounds on the soldier — would be nearly as long as that handed out to Elor Azaria, an Israeli army medic who was caught on video executing a wounded Palestinian suspect in the occupied West Bank city of Hebron in 2016.

Reminder: Elor Azaria, the Israeli killer-soldier who shot an incapacitated Palestinian attacker in the head, will be released from jail in less than 2 months - after 9 months in jail#proportions

The video of Azaria’s crime was recorded by Imad Abu Shamsiyeh, a Palestinian shoemaker who documents the activities of Israeli troops in Hebron.

The former director of B’Tselem, Jessica Montell, pointed out on Twitter that Thursday’s print edition of Haaretz reported Ahed Tamimi’s harsh sentence alongside another court’s ruling that Daniel Cohen Shor, a young Israeli who took part in the vicious beating of a Palestinian man, would only be punished with community service.

The judge in that case, Haaretz reported, explained that he had been lenient in part because “Cohen Shor was only 19 when he committed the crime” and had already spent one month in pretrial detention.