Israel Is Prepared to Kill More Unarmed Protesters in Gaza

Israel’s army expects up to 50,000 Palestinians to protest in Gaza on Friday, and is prepared to use deadly force against unarmed demonstrators once again. 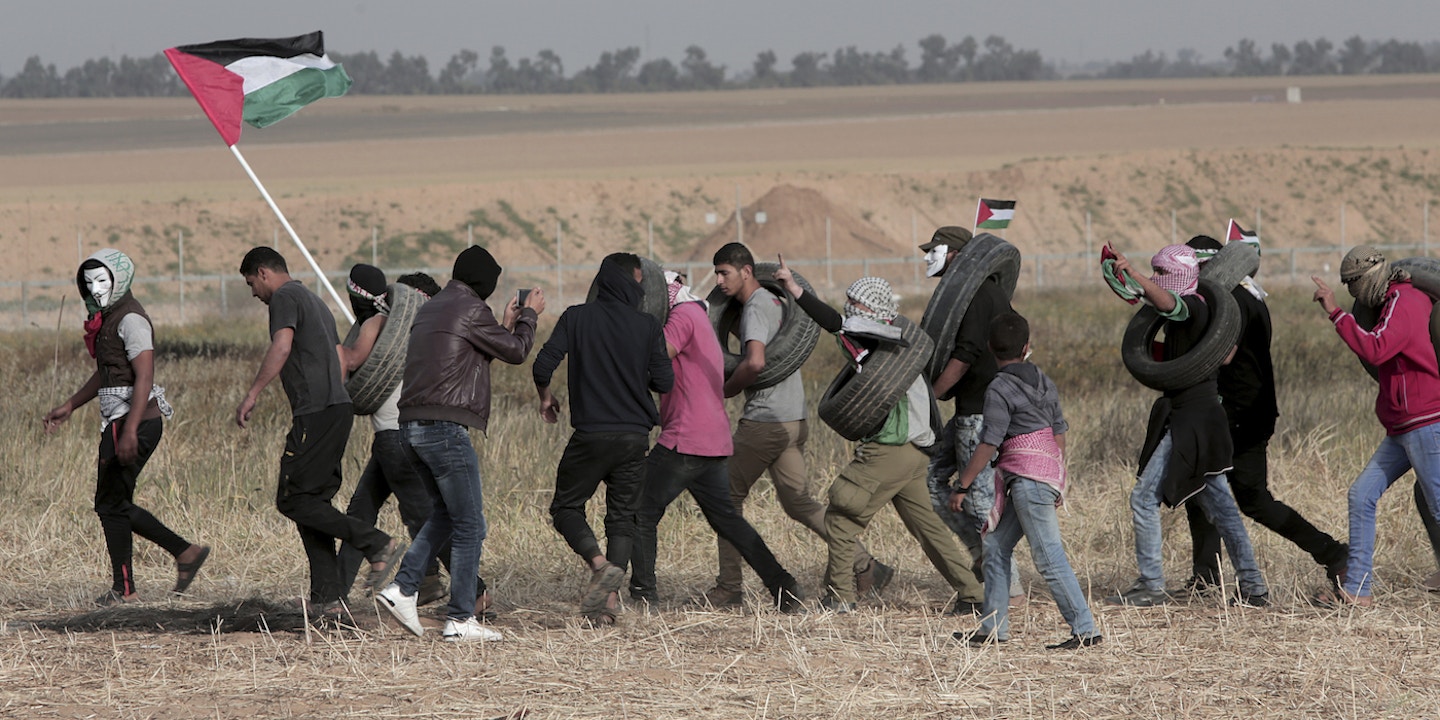 Israel’s army expects up to 50,000 Palestinians to attend protests in Gaza on Friday, and is prepared to once again use deadly force against unarmed demonstrators, one week after Israeli snipers fired at least 650 bullets at Palestinian civilians, killing 15.

“We have defined the rules of the game clearly and we do not intend to change them,” Israeli Defense Minister Avigdor Liberman said as he toured the frontier on Tuesday. “Anyone trying to approach the fence is putting their lives at risk.”

At protest camps near the fence, families of Palestinian refugees originally from towns and cities inside what is now Israel read books and learned first aid as young men stockpiled rubber tires, which they burned to create smokescreens as cover from sniper fire.

As part of the demonstrations in Gaza, some Palestinians formed a human reading chain pic.twitter.com/XquRL1pPgr

Even Palestinians skeptical of the tire-burning, which create toxic fumes, rejected claims from the Israel Defense Forces that the fires justified the use of deadly force against the protesters.

Palestinian burn tires in self defense, it creates big black smoke to prevent Israeli snipers from hunting peaceful protesters down. Its not an excuse to commit a massacre. It doesn't equal to intitaing violence like #Israel does. #Gaza #GreatMarchOfReturn

The Israeli human rights group B’Tselem, which monitors the treatment of Palestinians in the territories Israel’s military has controlled since 1967, published ads on Thursday urging soldiers to “refuse patently unlawful orders, to open fire on unarmed demonstrators in Gaza.”

“Approaching the Gaza perimeter fence is not an offense punishable by death or serious injury, to be executed immediately via shooting from a distance,” Hagai El-Ad, the rights group’s director, wrote.

Yousef Munayyer, who directs the U.S. Campaign for Palestinian Rights, pointed out that Israel’s justification for the use of force against unarmed protesters — that they are agents of a hostile power threatening to invade Israel — is contradicted by the reality that Gaza is not a separate state, but rather an enclave sealed off from the world by Israel’s military, which remains an occupying power under international law.

THERE IS NO BORDER BETWEEN ISRAEL AND GAZA.

There is a fence and checkpoints patrolled by the Israeli military all aimed at denying freedom of movement indiscrininantly to a civilian population under occupation. https://t.co/f69895Q0QA

While Israel has insisted that, since it withdrew settlers from Gaza in 2005, it no longer controls the territory, the fact that the Israeli military reserves the right to declare the land along its perimeter fence closed to Gazans suggests otherwise.

But if Israel is taken at its word, and the strip of land it bans Gazans from protesting or “rioting” in is along an international frontier, even the Israeli military’s use of nonlethal weapons, like tear gas, raises questions.

Looking at images of Israeli drones dropping tear gas on the protesters in Gaza this week, Francesco Sebregondi, an architect who investigates war crimes for the research group Forensic Architecture, observed that “tear gas is without debate considered a chemical weapon — hence banned from military arsenals.”

“So,” Sebregondi continued in an email, “either the State of Israel used chemical weapons in a military operation across its own borders” — which would be a violation of chemical weapons statutes — “or the State of Israel used tear gas legally as a means of riot control — in which case, Gaza must be considered within the borders of Israel, with all the sovereign responsibilities that this entails.”

As the International Committee of the Red Cross noted, Israel’s own manual on the Rules of Warfare on the Battlefield, published in 2006, acknowledged that “even the tear gas used by the police to disperse demonstrations is a chemical weapon and thus prohibited under the Protocol.” The manual went on to mock international law: “An absurd situation results in which demonstrators are ‘endangered’ by tear gas whereas fighters going out to battle are protected from it.”

Israel’s military has also reserved the right to spray herbicides along the frontier, destroying crops on the Gazan side of the fence. Keeping the area clear of vegetation provides Israeli snipers with clear lines of sight to fire on Palestinian militants or protesters at will.

In 2015, the Israeli military confirmed to the rights group Gisha that it does use crop dusters to spray herbicide inside Gaza — a scene frequently recorded on video by Palestinian farmers whose crops are damaged or destroyed.

Witnesses who visited the Palestinian protest camps this week reported that crop dusters were flying very close to where the sit-ins are taking place.