There is a gaping silence from Western liberals after Israeli forces shot 773 Palestinians, killing 17. Palestinian blood is cheap to them. 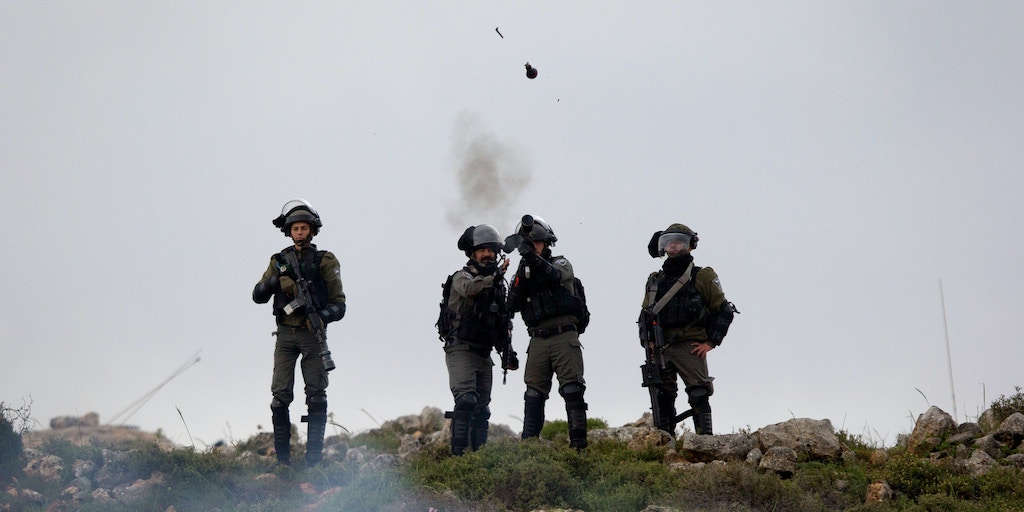 Israeli troops fire teargas at protesters during clashes following a protest to mark the Land Day, in the village of Qusra, near the West Bank City of Nablus, March 30, 2018.

“If the concept of intervention is driven by universal human rights, why is it — from the people who identify themselves as liberal interventionists — why do we never hear a peep, a word, about intervening to protect the Palestinians?”

That was the question I put to the French philosopher, author, and champion of liberal (or humanitarian) interventionism, Bernard-Henri Lévy, on my Al Jazeera English interview show “Head to Head” in 2013.

The usually silver-tongued Levy struggled to answer the question. The situation in Palestine is “not the same” as in Syria and “you have not all the good on one side and all the bad on the other side,” said Levy, who once remarked in reference to the Israeli Defense Forces, or IDF, that he had “never seen such a democratic army, which asks itself so many moral questions.”

I couldn’t help but be reminded of my exchange with the man known as “BHL” this past weekend, as I watched horrific images of unarmed Palestinian protesters at the Gaza border being shot in the back by the “democratic army” of Israel. How many “moral questions” did those Israeli snipers ask themselves, I wondered, before they gunned down Gazan refugees for daring to demand a return to their homes inside the Green Line?

On Friday, the IDF shot an astonishing 773 people with live ammunition, killing 17 of them. Yet a spokesperson for the IDF bragged that Israeli troops “arrived prepared” and “everything was accurate. … We know where every bullet landed.” On Sunday, Israel’s hawkish defense minister, Avigdor Lieberman, roundly rejected calls from the European Union and the United Nations for an independent inquiry into the violence and insisted that “our soldiers deserve a commendation.”

To be clear, then: Israeli troops will continue to murder and maim Palestinians while the Israeli government guarantees that there will be no consequences for their actions.

So, where is the outcry from liberal interventionists across the West? Where is BHL, as Palestinians are being shot and wounded in the hundreds in 2018?

Where is the call from former U.K. Prime Minister Tony Blair, whose 1999 speech in Chicago defending the concept of a “just war” and a “doctrine of the international community” became a key text for liberal interventionists, for a “no-fly” zone over Gaza? Why does a guest speaker at Ariel Sharon’s funeral have nothing to say about the increasing number of Palestinian funerals?

Where is the moral outrage from former U.S. ambassador to the United Nations, Samantha Power, the famously pro-intervention, Pulitzer Prize-winning author of a “A Problem From Hell,” which lamented U.S. inaction in Rwanda, over the sheer number of unarmed Palestinians shot, killed, and injured in recent days? How does she have time to retweet a picture of an elephant and a lion cub, but not to make a statement about the violence in Gaza?

Where is the demand from Canadian academic-turned-politician Michael Ignatieff, who was once one of the loudest voices in favor of the so-called responsibility to protect doctrine, for peacekeeping troops to be deployed to the Occupied Territories?

Where are the righteously angry op-eds from Nicholas Kristof of the New York Times, or Richard Cohen of the Washington Post, or David Aaronovitch of The Times of London, demanding concrete action against the human rights abusers of the IDF?

And where is the appeal from former U.S. Secretary of State and arch-interventionist Madeleine Albright for economic and financial sanctions against the state of Israel? For an arms embargo? For travel bans on Prime Minister Benjamin Netanyahu, Defense Minister Lieberman, and IDF chief of staff Lt. Gen. Gadi Eizenkot?

Their silence is deafening — and telling. Palestinians, it seems, have been so dehumanized that they don’t deserve a humanitarian intervention; their blood is cheap, their plight is unimportant, and, perhaps above all else, their killers are our friends. 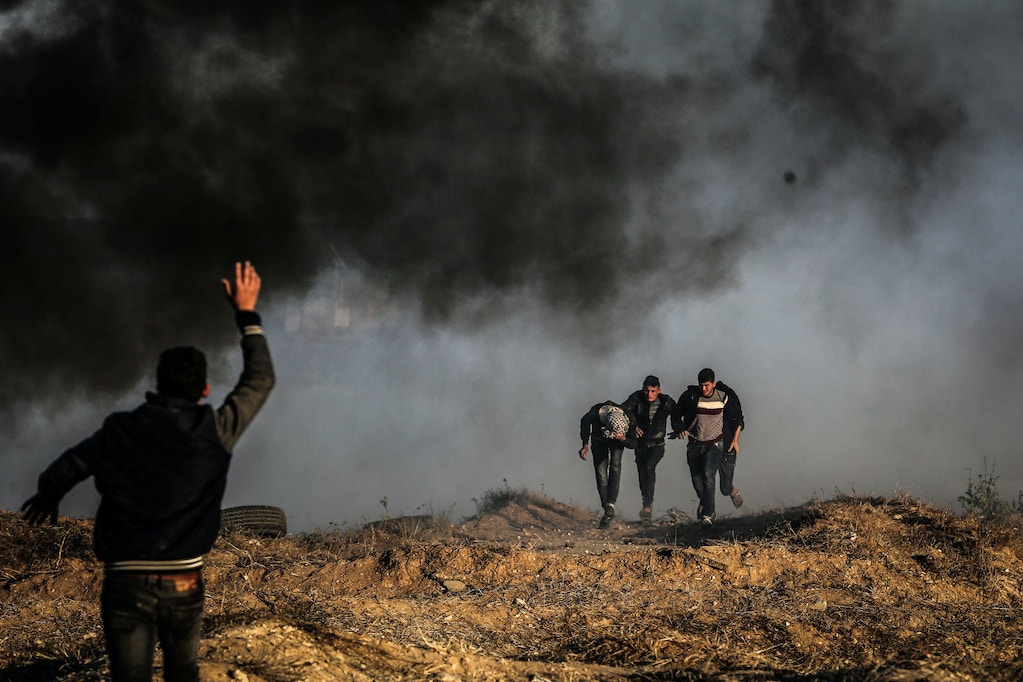 Palestinians protesters run for cover from Israeli tear gas during clashes with Israeli troops along the border between Israel and Gaza Strip, in the eastern Gaza Strip, 01 April 2018.

Should we really be surprised, though? After all, this isn’t the first time that members of the liberal intervention brigade have shamelessly ignored the tragic deaths of innocent Palestinians.

In March 2001, towards the start of the “Second Intifada,” and with the Palestinian civilian death toll mounting, the U.N. Security Council proposed a resolution that would have “set up an appropriate mechanism to protect Palestinian civilians, including through the establishment of a United Nations observer force” on the ground in the Occupied Territories. The United States, however, in the form of the George W. Bush administration, vetoed that resolution. What was the response from U.S. liberals? They stayed mum.

In the summer of 2014, the Israeli air force — for the third time in six years — pounded the Gaza Strip, dropping bombs on schools, hospitals, and apartment buildings, and killing more than 1,500 Palestinian civilians — including 500 children — in the process. What was the position of then-U.S. Secretary of State Hillary Clinton (who would later throw her support behind a “no-fly” zone over Syria)? “Hamas provoked another attack” while “Israel has a right to defend itself.” And what was the response from her fellow liberals? Most of them didn’t say a word.

Fast forward to 2018: This time round, 17 dead and 1,400 wounded. Videos going viral of Israeli soldiers — armed and funded by U.S. taxpayers — shooting fleeing Palestinians in their backs. Again, not a peep on Twitter, or elsewhere, from the leaders of the Democratic Party in Congress, such as Sen. Chuck Schumer and House Minority Leader Nancy Pelosi. For liberal Democrats, #resistance is supposed to be against the Trump administration and the so-called alt-right, not against the longest military occupation in the world.

This moral blindness that so many liberals and progressives in the United States have for the Palestinians has never ceased to amaze — or disgust — me. As the Israeli writer and economist Abraham Gutman notes, “This blind spot is so pronounced that it created a whole new type of progressive, the PEP, ‘Progressive-Except-on-Palestine.’” The PEP, he continues, “is horrified by the appointment of Jeff Sessions as Attorney General, but willing to argue that there is nuance and perhaps support the government of Israel, with [Ayelet] Shaked as the Minister of Justice, who posted on Facebook an article calling Palestinian children ‘little snakes.’”

Indeed. The PEP will loudly condemn the bigotry and nativism of the Republican Party in the United States, and the ongoing segregation and racism in the Deep South, while averting their gaze from the brazen racism of the Israeli government and the ongoing apartheid in the Occupied Territories.

The PEP rails against Trump and his hawkish minions while standing to applaud Netanyahu or smiling in photos with Lieberman — this despite the fact that the similarities between the Trump and Netanyahu administrations have been well–documented.

And the PEP who happens to be a proud supporter of liberal interventionism will back interventions almost everywhere except the Occupied Territories. Their heart bleeds for Syrians, Libyans, Afghans, Iraqis, Rwandans, Kosovars … but not for Palestinians.

This is not an exercise in whataboutism; it is about drawing attention to blatant double standards and moral hypocrisy. On Palestine, liberal interventionists who happen to be “progressive-except-on-Palestine” borrow from the Trump playbook when they cynically blame “both sides” for the violence. They claim that Palestinian deaths are the consequence of “clashes” and “confrontations.” Yet the reality is that one side is the occupier and the other is the occupied; one side has rockets and rifles and the other side has rocks and slingshots; one side is doing the killing and the other side is doing the dying.

There is no other conclusion: The ongoing and glaring refusal of liberal interventionists in the West to say even a word about the need to protect occupied Palestinians from state-sponsored violence is a reminder of just how morally bankrupt and cynically hypocritical the whole “liberal intervention” shtick is.