Big money is pouring into Allentown to try to stop a Democrat who tried to get a job with Trump. 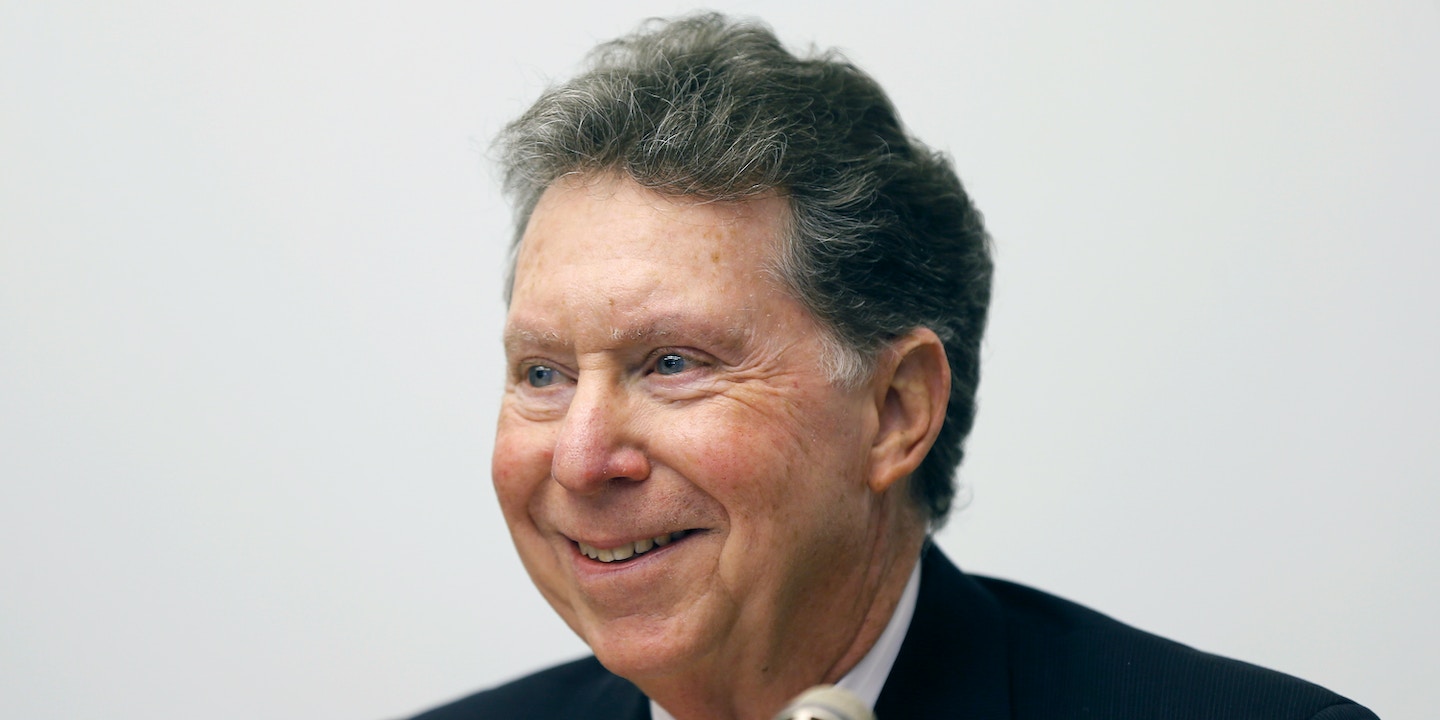 The most well-known candidate in a Democratic primary in a district carried by Hillary Clinton in 2016 pursued a job with Donald Trump’s administration during its transition into the White House.

John Morganelli, a Lehigh Valley prosecutor, made his bid for the gig in the most pitiful way imaginable — by tweeting at @realDonaldTrump.

The substance of his politics doesn’t get any better from a Democratic perspective. He opposes legal abortion and has teamed up with Republican Sen. Pat Toomey of Pennsylvania to target sanctuary cities, part of a broadly hostile immigration record. He is a longtime opponent of gun control. “I believe in my party’s principles, you know, 80 percent of the time,” he told the Morning Call, a local newspaper.

He even sent a tweet offering to represent Ivanka Trump after her high-profile airline hassle. (“John voted for Hillary Clinton in 2016 and would still do so today,” said Rich Wilkins, a spokesperson for Morganelli, adding that he stated public support for Clinton during the campaign.)

@realDonaldTrump As a DA for 25 years, guy on the plane harassing Ivanka should have been charged. I volunteer my https://t.co/mukQqhhNx9

But the local prosecutor’s long career and multiple failed bids for higher office have given him strong name recognition in Pennsylvania’s 7th Congressional District, and Morganelli, who has the backing of the local firefighters union, could easily emerge from the May 15 primary as the Democratic nominee for the seat, vacated by the retiring Republican Charlie Dent. That possibility is even more likely now that the group No Labels, through its PAC United Together, is dumping money into the race to back Morganelli, as The Washington Post reported. (This is the second anti-choice Democrat No Labels has backed in primaries this cycle.)

The race drew national attention in March, when Democratic Congressional Campaign Committee operative Tim Persico met with a local Democratic leader to ask if he thought Susan Wild or Greg Edwards, two other candidates in the race, would be willing to drop out and run for state Senate, a proposition they both rejected. Now, with the primary fast approaching, the resistance is scrambling to shut Morganelli out.

Democratic megadonor Tom Steyer has jumped in, announcing on Thursday a six-figure attack aimed squarely at Morganelli. “In 2018, there is no room in the Democratic Party for a man who denies a woman her right to choose and who engages in hateful and dishonest dialogue about immigrant communities,” the billionaire Steyer, president of NextGen America, said in a statement accompanying the announcement. “Democrats deserve better than John Morganelli.”

Sen. Bernie Sanders, I-Vt., held a rally in Allentown for Edwards, a pastor who is leading the candidates in fundraising, on Saturday, and earlier this week he sent an email blast to his supporters rallying donations to Edwards’s campaign. The pro-choice group EMILY’s List is pouring big money into the race, both to crush Morganelli, but also to promote Wild, a former city solicitor.

EMILY’s List, which backs pro-choice women, announced last week that it will be funding at least 250,000 pieces of mail and television ads in both the Allentown and Philadelphia markets ahead of the primary. Mail can cost as much as $2 per piece, and the Philadelphia television market is one of the more expensive in the country, meaning a back-of-the-envelope calculation could easily put the cost of the intervention at $1 million or more.

That’s where the resistance to Morganelli has itself turned into a battle. Wild has a controversial record as city solicitor, and EMILY’s List is drawing fire from progressive activists for its support of her.

Critics have surfaced a horrifying video of an Allentown policy officer kicking a suspect who was on his hands and knees in the face, then following it up by dropping his knee on the back of the suspect’s head, smashing his jaw and knocking out three teeth.

The victim sued, and Wild, as city attorney, decided to fight back. “The actions of Officer Iannetta have been thoroughly reviewed by command staff and the Solicitor’s Office and found to be appropriate under the circumstances,” she said in an October 2016 statement. “We look forward to the evidence in this case demonstrating that his actions were appropriate.”

Instead, the excessive force lawsuit was settled, and the city agreed to pay $160,000.

In 2016, Wild opposed a measure that would have required gun owners to report lost or stolen weapons, arguing to city council that the state Supreme Court would likely find it unconstitutional.

“It’s alarming that some national organizations are not standing with Greg. We’re particularly disappointed that Emily’s List, instead of supporting Greg, has decided to invest heavily to back Susan Wild, a candidate who has defended police brutality and opposed local gun reform efforts,” the trio said.

Wild’s campaign did not return a request for comment.

With few Democrats left who are staunchly opposed to legal abortion, chances were high that EMILY’s List would get involved (though it has stayed out of a primary between anti-choice Brad Ashford and pro-choice Kara Eastman in Nebraska). “Morganelli is an anti-choice Trump supporter who has no business serving in Congress, and we’re going to keep fighting to stop him from getting there,” the group said in a public statement, which it shared with The Intercept in response to a question about Wild’s defense of the officer. “EMILY’s List is proud to stand with Susan Wild, who is also running for Congress in the 7th. Unlike Morganelli, Susan is proudly pro-choice and will fight for the people of her community. For voters, the choice is clear.” (Morganelli has said that EMILY’s List mischaracterized his record, according to the Morning Call.) The strategic question for EMILY’s List was whether it would spend its money on ads boosting the name recognition and public opinion of Wild, or whether it would target Morganelli, making sure Democratic voters knew about his support of Trump and reactionary politics.

EMILY’s List went in both directions, and is putting half its money toward positive messages around Wild and the other half toward attacking Morganelli, a spokesperson said.

Edwards, who has a robust ground game, may be able to reap the benefits of the group’s attacks on Morganelli, if votes for Morganelli are suppressed.

On Saturday, Sanders’s rally for Edwards in Allentown attracted about 1,000 people, with lines wrapping around the Miller Symphony Hall two hours before the event was scheduled to begin. Speaking to a packed room, the senator saluted Edwards’s embrace of progressive policies like Medicare-for-All, debt-free college, universal Pre-K, and a $15 minimum wage.

“We can do it. We can rebuild our infrastructure. We can raise the minimum wage. We can guarantee health care to all people. We can end sexism and racism and homophobia and xenophobia,” Sanders said to cheers. “We are a great people. We are a great people who have done so many things throughout our history. And now is the time for us to stand up fight back and elect representatives like Greg Edwards.”

Charlotte Bloys, a high school student from Bethlehem, said she began researching candidates shortly after registering to vote a month ago but found it overwhelming with such a crowded primary field. She credited Sanders’s endorsement with helping her decide to support Edwards, the candidate she considers most closely aligned with her progressive politics. “I find myself struggling to support the regular establishment Democrats because they’re still catering to corporate interests,” she said after the rally.

Sarah Trevick, who recently turned 18, said that it was inspiring to see Sanders and Edwards share a stage because “they’re both so about the people and about getting rid of corporate greed and making sure everyone in America has healthcare.”

Allentown, whose population of 120,000 makes up about one-fifth of the district, is roughly half Latino, according to the latest census estimates, and 14 percent African-American. (It also boasts a healthy Syrian Christian population.)

Outside the post-industrial city, the district becomes much whiter and more conservative, but Edwards thinks his unapologetically progressive message can resonate there, too. “This moment does not call for moderation, but revolutionary ideals rooted in progress,” he announces on the front page of his campaign website.

There are currently no women serving in statewide office in Pennsylvania, or in Senate or House seats, but Edwards would be breaking barriers too: He is Afro-Latino and running in a district that has only ever, in the more than 200 years it has existed, been represented by white men.

Update: May 8, 2018, 10:14 a.m.
This piece has been updated to include reporting from Sen. Bernie Sanders’s rally for Greg Edwards in Allentown, Pennsylvania, on May 5.