With the agricultural industry’s “ag-gag” laws dying in court, it appears to be turning to new tactics to silence activists and journalists who expose its abuses.

This article includes graphic images and video some readers may find disturbing.

The six defendants include Diane Gandee Sorbi, 62, a retiree who spends most of her time volunteering at animal shelters; Andrew Sharo, 24, a Ph.D. student in the biophysics program at Berkeley; and Wayne Hsiung, a lawyer and lead investigator.

In January 2017, the six activists entered a farm in Moroni, Utah, that supplies turkeys to Norbest, a large company that aggressively markets itself to the public as selling “mountain-grown” turkeys who are treated with particularly humane care. Its marketing materials feature bucolic photographs of Utah nature, designed to create an image that its turkeys are raised in fresh and healthy natural settings, accompanied by assurances that its “practices are humane” and ethical, “with the health and comfort of the birds of paramount importance.”

What the activists found at the farm was something radically different: tens of thousands of turkeys crammed inside filthy industrial barns, virtually on top of one another. The activists say the animals were suffering from diseases, infections, open wounds, and injuries sustained by pecking and trampling one another. Countless chicks and adult turkeys were barely able to stand, or were lying in their own waste, close to death.

They also say that, as a result of the filth in these barns, hepatitis and other viral diseases were rampant and spreading throughout the flock, which in turn caused the farm to put various antibiotics, including penicillin, into the barns’ water supply.

The mass or indiscriminate use of antibiotics by industrial farms poses a severe danger to the public health, since it breeds antibiotic-resistant bacteria into the human food supply. Between 70 to 80 percent of all antibiotics administered in the United States are given to farm animals as part of the agricultural industry.

Norbest expressly promises that its farms do “not use, nor does our drug policy permit, the routine use of medically important antibiotics.” (While the company admits that conditions at the farm were abusive and unacceptable, it denies that hepatitis was rampant and that antibiotics were indiscriminately administered.)

The activists, all volunteers with the animal rights group Direct Action Everywhere, or DxE, filmed and photographed the conditions inside the farm. “In my 20 years of investigating animal abuse, I’ve never seen conditions this horrifying at a corporate farm,” Hsiung told the Intercept. “We saw animals that looked dead but were still breathing; animals, languishing, who had virtually been pecked to death; many animals collapsed on the ground in their own feces and filth. It was as bad as it gets.”

The activists also rescued three turkeys who were clearly suffering from extreme disease and injury and on the brink of death, part of a tactic known as “open rescue,” in which activists choose a symbolic handful of animals from industrial farms who are close to death, provide them with veterinarian care, and then publicly post film of their recovery at a shelter.

The three birds removed from the farm have no commercial value, because they were virtually certain to die within days, if not hours. DxE activists estimate that up to 25 percent of animals at industrial farms die before they can make it to the slaughterhouse due to the conditions in which they are kept.

In November 2017, DxE published video and photographic findings from its investigation of the Norbest-supplying farm. The publishing of the investigation was highly embarrassing to Norbest, as the materials received substantial local press coverage.

The Salt Lake Tribune, the largest paper in Utah, published a large article with a horrific photograph at the top, describing the conditions shown in the facility as “shocking.” It noted that “Norbest is one of the largest marketing cooperatives in the United States, selling turkeys raised by some 40 Utah farmers. Combined, it produces 5 million turkeys annually.” 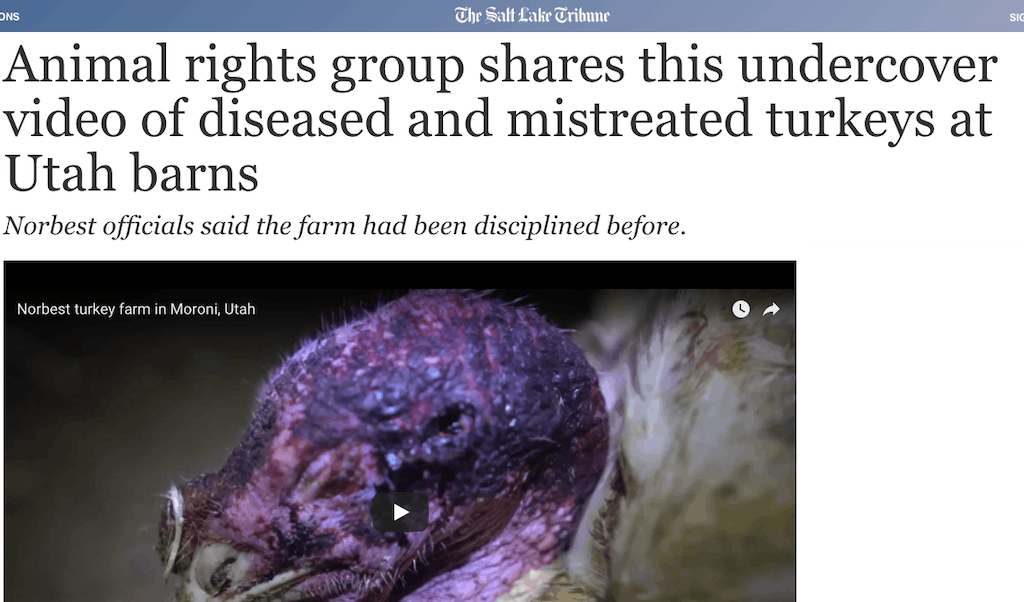 Local Fox stations from around the country broadcast a dramatic story from its Utah affiliate, which documented the abuses at the farm. “Video shows ‘horrific’ conditions at farm that sold turkeys nationwide,” the local Fox affiliate headline in Cleveland said, featuring the highly incriminating story that was broadcast on the nightly news program in Utah, in which a reporter stood outside one of the barns, pointing at it and describing how the turkeys found inside were “sick, disfigured, and even dead.” The DxE investigation received national media coverage as well. One CBS News report, for instance, featured DxE’s findings that the turkeys were “packed shoulder-to-shoulder in ‘filthy industrial sheds,'” and that “many were diseased or suffering from injuries inflicted by other birds.” About DxE’s claim of mass antibiotic use, CBS noted: “Medical experts have said that practice may lead to people contracting antibiotic-resistant diseases.”

The CBS report also linked to a video, produced and published by DxE, which showed the conditions inside the facility as well as the rescue of the three turkeys. One of the rescued turkeys appeared to have a broken neck, but turned out instead to be suffering from a severe bacterial infection in her brain. Another was one-tenth the size of the average turkey, due to being severely malnourished and diseased. The third had open, untreated wounds all over her face from having been pecked.

So severe and horrifying was the abuse and disease documented by DxE that Norbest executives proclaimed themselves highly “disturbed” by what they saw. The Fox report filmed Norbest CEO and President Matthew Cook watching the video for the first time. Cook said he felt “deep disappointment” at what he saw, adding: “This just shouldn’t happen.”

Cook, while denying that hepatitis was rampant at the farm, also claimed that this facility had been cited by corporate executives for abuse in the past, and had been told that “unless they fix these things,” their operations would be suspended. After watching the video, the CEO said the company was considering “terminating the contract” with this facility.

The company then issued a formal statement on its site, proclaiming itself “deeply disappointed that our standards were not upheld by the farmer in question.” It also vowed that it “will re-examine every step in our training and inspection process to determine whether there is more we can do to guarantee our animal care standards are met.”

But DxE vehemently denies that there is anything aberrational about what they saw — other than the fact that, in this case, it was publicly exposed. Indeed, investigations of turkey farms by other groups, including People for the Ethical Treatment of Animals, or PETA, have found that these are standard conditions throughout the U.S.:

These gentle, intelligent birds spend five to six months on factory farms, where thousands of them are packed into dark sheds with no more than 3.5 square feet of space per bird. Turkeys are genetically bred to grow as fast as possible, and they often become crippled under their own weight.

To keep the crowded birds from scratching and pecking each other to death, workers cut off portions of the birds’ toes and upper beaks with hot blades and de-snood the males (the snood is the flap of skin that runs from the beak to the chest). No pain relievers are used during any of these procedures. The answer almost certainly lies in recent rulings from federal courts that have killed the agricultural industry’s preferred weapon for both suppressing evidence of abuse and also silencing journalists and activists with criminal law: the so-called ag-gag laws, which made publishing videos of farm conditions that are taken as part of undercover operations a felony, punishable by years in prison.

In July 2017, a federal court struck down Utah’s “ag-gag” law as a violation of the free speech guarantee of the First Amendment; the law, said the court, was designed solely to “restrict speech related to agricultural operations.” When Utah decided not to appeal the ruling, the Salt Lake Tribune declared in its headline: “Utah’s ‘ag-gag’ law — which banned secret filming at farms — is dead.” Earlier this year, the 9th Circuit Court of Appeals struck down Idaho’s “ag-gag” law on similar grounds.

Those rulings left Utah — whose state government is notoriously dominated by its agricultural industry — without its most menacing weapon to punish people who expose abuses on factory farms. Charging them with felony theft instead appears crafted to perform the same function. “This new prosecution seems to be a clear attempt to perform an end run around the death of the ‘ag-gag’ law,” said Hsiung.

In February of this year, Norbest was purchased by Pitman Farms of California, a supplier of Whole Foods. As The Intercept reported last September, Pitman itself has its own struggles with accusations of abuse of animals at its farms.

But now that Norbest is part of Pitman, this appears to be a case where a corporate supplier of Whole Foods — which touts itself as selling the healthiest and most organic products — is pressing charges against people who exposed animal abuse and threats to the public health. Requests for comment submitted to Utah state’s attorneys office and Norbest were unanswered as of publication of this article.

All of this takes place in the context of a state whose government has been almost entirely captured and co-opted by the industry it is supposed to regulate. “This is not an area where the government merely fails to do its job to stop abuse, violence, and unethical behavior,” said Hsuing. “The government is in active collaboration with the industry that commits these crimes, forcing citizens to expose them.”

For their successful efforts to expose these abuses and force reforms, Hsuing and his five fellow activists now face prosecution and the possibility of prison terms. Thus appears the same dynamic seen in so many other American realms, from torture to illegal spying to Wall Street fraud: The most powerful actors responsible for the most egregious acts are immunized from consequences, while the only ones punished are the ones who expose them.

Correction: May 7, 2018
A previous version of this story misspelled Diane Gandee Sorbi’s last name. It has been updated.