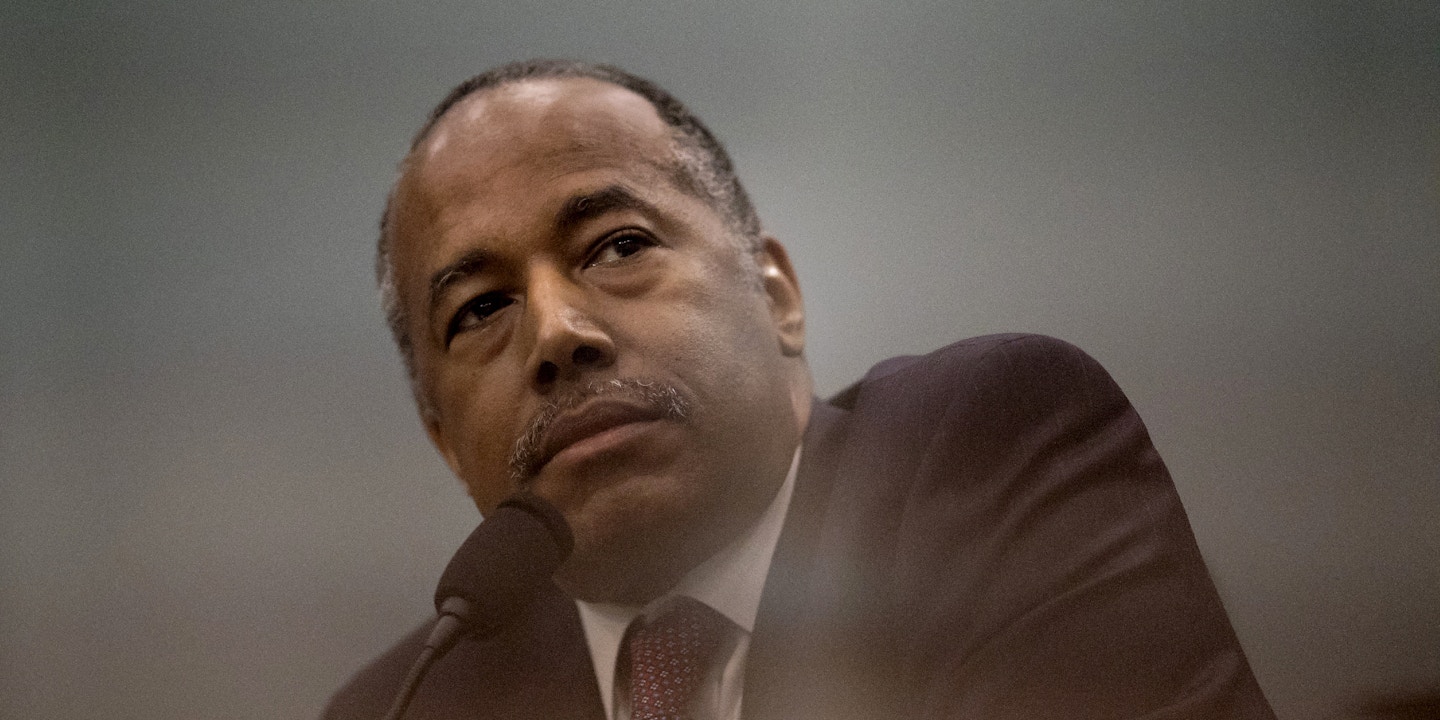 The Trump administration has illegally suspended a rule that requires local governments to show they’re working to reduce housing segregation, according to a lawsuit filed Tuesday against the U.S. Department of Housing and Urban Development and its secretary, Ben Carson.

HUD announced in early January that it would delay enforcing the rule. Civil rights advocates say the delay is an effective end to federal fair housing oversight over billions of dollars to be doled out to local governments for at least the next six years. They have also accused HUD of reducing the amount of support it offers local communities in implementing the desegregation rule, effectively sabotaging its success.

“Decades of experience have shown that, left to their own devices, local jurisdictions will simply pocket federal funds and do little to further fair housing objectives,” reads the complaint, which was filed by the Lawyers’ Committee for Civil Rights Under Law; the American Civil Liberties Union; the NAACP Legal Defense and Educational Fund; Public Citizen; the Poverty & Race Research Action Council; and the law firm Relman, Dane & Colfax.

The rule in question is called Affirmatively Furthering Fair Housing, or AFFH, which was finalized in 2015. It was designed to more effectively implement the integration mandates of the Fair Housing Act, a landmark civil rights statute passed a half-century ago to eradicate discrimination and segregation in housing. While jurisdictions that receive federal HUD funds have long had to certify that they are indeed working to reduce government-sponsored segregation, for decades HUD did little to ensure real steps were actually being taken.

In the complaint, which was filed in the U.S. District Court for the District of Columbia, the lawyers credit the AFFH rule with spurring commitments by local governments over the last two years to provide more help for African-Americans facing eviction from their homes, revamp zoning laws to be more inclusive of people with disabilities, and build more low-income housing in affluent areas.

HUD spokesperson Brian Sullivan declined to comment on the suit, citing pending litigation. He instead referred to his agency’s statement released in January, which says that HUD has “extended the deadline” for local governments to comply with the AFFH rule “while HUD invests substantial human and technical resources toward improving” the tool used for rule compliance. “HUD stands by the Fair Housing Act’s requirement to affirmatively furthering fair housing, but we must make certain that the tools we provide to our grantees work in the real world,” the statement said.

AFFH was born out of a problem that was identified at least a decade ago.

In 2008, the National Commission on Fair Housing and Equal Opportunity reported that the government’s existing system for ensuring fair housing compliance “has failed.” The commission, co-chaired by two former HUD secretaries, noted that the federal housing agency requires “no evidence that anything is actually being done as a condition of funding,” and does not punish jurisdictions found to be directly involved in discrimination or failing to affirmatively further fair housing.

One year later, HUD convened a listening conference with over 600 participants from across the country to discuss compliance with federal fair housing mandates. John Trasviña, who was then HUD’s assistant secretary for fair housing and equal opportunity, testified before Congress later that “fair housing and civil rights groups, mayors, counties, and states all voiced their desire for HUD to amend its regulations to provide more concrete, specific information about how to develop a meaningful plan for affirmatively furthering fair housing.”

In 2010, the Government Accountability Office released a comprehensive report outlining the failures of local jurisdictions to comply with federal fair housing mandates, and the failures of HUD to promote meaningful oversight and enforcement over those obligations.

Over the next five years, key stakeholders worked closely with HUD to develop the newly revised AFFH rule, which not only gave communities more tools to carry out their fair housing obligations, but also strengthened HUD’s enforcement mechanisms for oversight. In other words, the fair housing mandates finally had some teeth.

Civil rights advocates have long worried that the Trump administration might take aim at this hard-fought rule. Prior to Ben Carson’s appointment as HUD secretary, he had penned an op-ed likening the AFFH rule to other “failed socialist experiments.” Once he was confirmed, Carson told the Washington Examiner that he “believe[s] in fair housing,” but not in “extra manipulation and cost,” and so his agency will need to “reinterpret” the rule.

In suspending the AFFH rule, advocates allege HUD has violated the Administrative Procedures Act, the federal law that governs how federal agencies propose and implement regulation. The Trump administration has been repeatedly accused of violating the APA, issuing new directives and mandates, and rescinding old ones, without going through the established channels of rule-making.

This is the second major civil rights lawsuit aimed at HUD in the last year on the grounds of violating the APA. As The Intercept reported at the time, civil rights attorneys sued HUD and Carson in October, for suspending a rule that would have assisted low-income voucher holders to move into more affluent communities. The attorneys succeeded in their legal challenge in late December, and the rule is now back in effect.

Sasha Samberg-Champion, a Relman, Dane & Colfax attorney who was involved in the former case and is also litigating this one, told The Intercept that their earlier experience in court “suggests to us that the judges in the District Court for the District of Columbia are well acquainted by now with lawless actions” of HUD and other Trump administration agencies.