Oliver North Worked With Cocaine Traffickers to Arm Terrorists. Now He’ll Be President of the NRA.

The NRA constantly tells us that we need guns to protect ourselves against drug gangs — which makes their choice of Oliver North both hilarious and sordid. 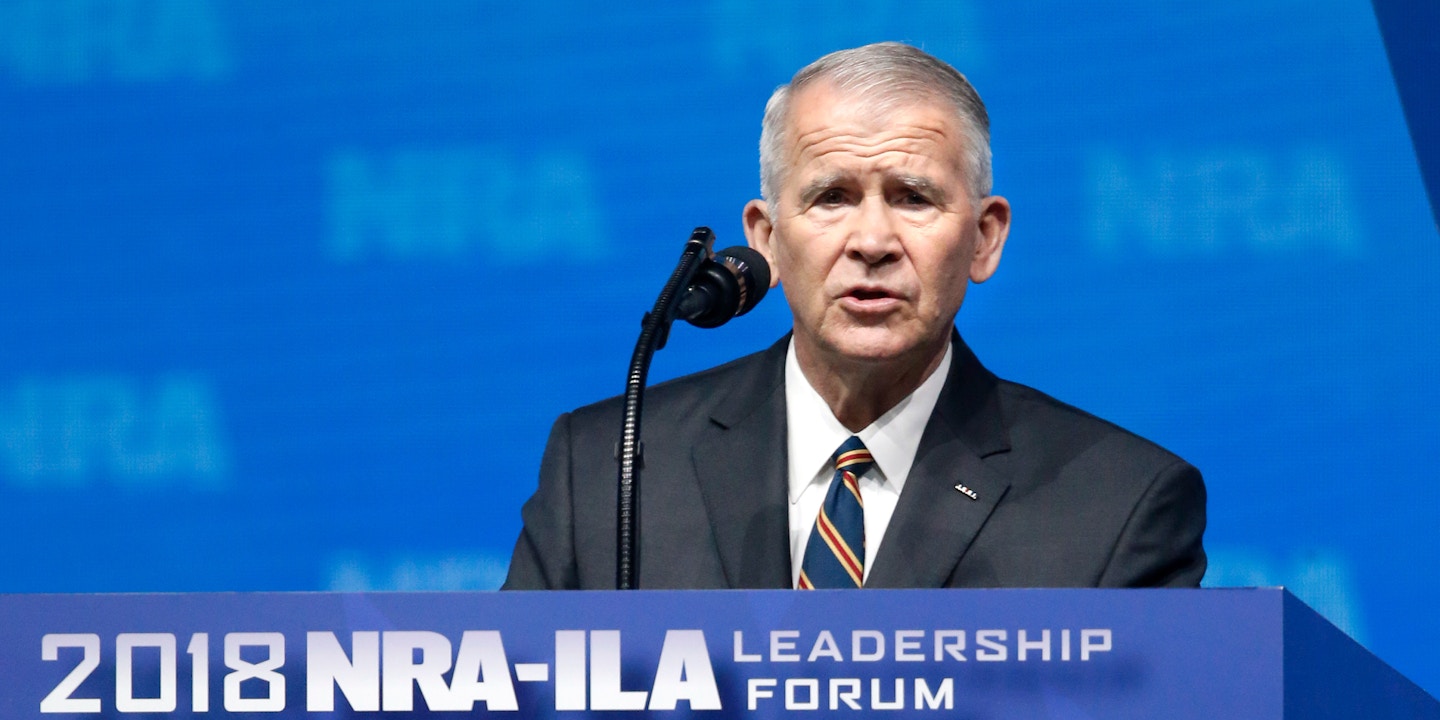 The National Rifle Association has always been clear about drugs: They’re terrifying.

Last year, NRA CEO Wayne LaPierre darkly warned that members of drug gangs “are infiltrating law enforcement and even the military.” In 2013, LaPierre proclaimed that “Latin American drug gangs have invaded every city of significant size in the United States” and are a key part of the “hellish world” that awaits us in the future. When Charlton Heston was president of the NRA in the 1990s, he declared that regular Americans would soon be besieged by 10,000 drug dealers freed from prison by the Clinton administration.

It seems odd, then, that the next president of the NRA will soon be Oliver North, who spent years in the 1980s working together with large-scale cocaine traffickers and protecting a notorious narco-terrorist from the rest of the U.S. government.

This reality about North has been largely covered up, first by North himself and then by Fox News and the passage of time. Thirty years later, it’s been almost totally forgotten. But the facts remain genuinely appalling.

North was an active-duty Marine when he joined the Reagan administration’s National Security Council in 1981. One of Reagan’s top priorities was organizing and funding the Contras, a guerrilla military force, to overthrow the revolutionary socialist Sandinista government of Nicaragua. But the Contras engaged in extensive, gruesome terrorism against Nicaraguan civilians. Congress gradually reduced and then eliminated appropriations supporting them, leading the Reagan administration to secretly search for money elsewhere.

According to the report from a later congressional investigation, North was put in charge of this operation, which participants dubbed “The Enterprise.” 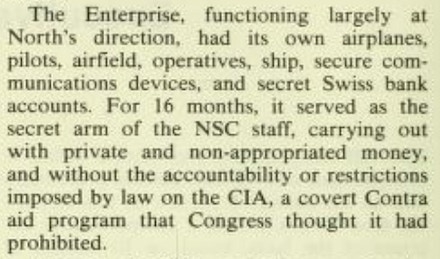 North enthusiastically looked for cash wherever he could find it and led many of the clandestine schemes that later became known as the Iran-Contra scandal. The Sultan of Brunei donated $10 million (which North’s secretary Fawn Hall accidentally wired to the wrong Swiss bank account), and Saudi Arabia ponied up as well. North also pushed what he called “a neat idea”: selling U.S. military equipment to Iran, with the proceeds passed along to the Contras.

Meanwhile, the Contras had a neat idea of their own: facilitating cocaine trafficking through Central America into the U.S., with a cut going toward supporting their war against the Sandinistas. Some Contras were themselves cocaine traffickers, and others were simply happy to make alliances of convenience with drug cartels.

There’s no evidence that North actively wanted cocaine to be smuggled into the U.S. It was simply that he had other priorities. But was he aware of the Contras’ drug trafficking? Yes. Did he try to shield one of “his” cocaine traffickers from consequences from the other branches of the U.S. government? Yes. Did he work together with a known drug lord? Yes.

All in all, North’s connections to drug trafficking were so egregious that in 1989 he was banned from entering Nicaragua’s neighbor Costa Rica by Óscar Arias, the country’s president and 1987 recipient of the Nobel Peace Prize.

This may seem shocking to the easily shocked. But it’s all been documented in various government investigations. All you need in order to learn about it is curiosity and an internet connection. For instance, here’s a screenshot from the CIA’s website about the Nicaraguan Revolutionary Democratic Alliance, or ADREN by its Spanish acronym, which was later folded into the Contras:

"Allegations of Connections Between CIA and The Contras in Cocaine Trafficking to the United States,” CIA, 1998

The full extent of North’s complicity in cocaine trafficking will never be known. When the Iran-Contra scandal story broke in November 1986, he ordered Hall to destroy so many documents that the shredder malfunctioned, and she had to ask White House maintenance to come and fix it. Moreover, when North was removed from his National Security Council job, he took with him 2,848 pages of daily notes — which legally belonged to the federal government. By the time a congressional investigation was finally able to examine the notes, North and his lawyers had redacted huge amounts of information. Nonetheless, 543 of the pages mentioned drugs or drug trafficking, with the probe finding that “in many of these cases, material in the Notebooks adjacent to the narcotics references has been deleted.”

But despite North’s cover-up, what we do know for sure is incredibly damning.

Perhaps most significantly, according to North’s own notes he met with Panama’s then-dictator Manuel Noriega in London in September 1986 to collaborate on a plan for Noriega to support the Contras in return for American money and arms. They discussed sabotaging a Nicaraguan airport and oil refinery, as well as creating a program to train Contra and Afghan mujahedeen commandos in Panama with Israeli help. (It’s not completely clear, but North appears to have written that “Rabin” – i.e., Yitzhak Rabin, who was then Israel’s minister of defense – “approves.”)

North was clearly enthusiastic about the potential partnership with Noriega. In an earlier email selling the proposal to one of his superiors, he wrote that “we might have available a very effective, very secure means of doing some of the things which must be done if the Nicaragua project is going to succeed. … I believe we could make the appropriate arrangements w/ reasonable OPSEC and deniability.” But of course, Noriega was himself a powerful drug trafficker. Knowing this didn’t require a top-secret clearance: It was published on the front page of the New York Times three months before North met with him. According to the Times article, “A White House official said the most significant drug-running in Panama was being directed by General Noriega.”

The North-Noriega operation ultimately didn’t come to fruition; the Iran-Contra affair was exposed just two months after they met. But the planning that did occur is conclusive evidence that North eagerly worked with drug dealers operating on the largest scale imaginable. North also went to great lengths to protect an ally who was a key participant in what the Justice Department called “the most significant case of narco-terrorism yet discovered.”

In 1984, José Bueso Rosa, a Honduran general, plotted with several others to assassinate the president of Honduras. They planned to fund the hit with the proceeds from selling 760 pounds of cocaine in the U.S. The FBI, however, had the participants under surveillance, intercepted the shipment when it arrived at a small airfield in Florida, and arrested everyone involved.

But Bueso had played a key role in Honduran support for the Contras. So North went to work to get him off as lightly as possible. (Bueso had not himself been charged with drug trafficking, but wiretaps made it obvious he participated in that part of the project.)

In email, North explained his plans to “cabal quietly” with other Reagan administration officials “to look at options: pardon, clemency, deportation, reduced sentence.” Eventually, North planned to have the case’s judge informed “in camera” — that is, secretly — about “our equities in this matter,” in order to push for leniency. Then, North wrote, it would be necessary to quietly brief Bueso, so that he wouldn’t “start singing songs nobody wants to hear.”

North didn’t get everything he wanted, but did succeed in having Bueso transferred to a “Club Fed” minimum security prison. Bueso was released on parole after 40 months.

There are also numerous documented examples of North being informed that members of the Contras were involved in drug trafficking, with no signs that North took any action.

For instance, after meeting with a key assistant, North wrote in his notebooks about a plane being used by the brother of a top Contra leader to ferry supplies from the U.S. to Central America. “Honduran DC-6 which is being used for runs out of New Orleans,” North jotted down, “is probably being used for drug runs into U.S.”

North testified in front of Congress that he’d passed this information along to the Drug Enforcement Administration. When later questioned by the Washington Post, the DEA, the State Department, and the U.S. Customs Service all stated that there was no evidence North ever said anything about the matter to them. The same aide who told North about the plane also informed him about the “potential involvement with drug running” of one Contra official and that another was “now involved in drug running out of Panama.” And after a call from another subordinate, North noted that the Contras were planning to buy weapons from a Honduran warehouse — and “14 M to finance came from drugs.”

North was getting similar reports from outside the government as well. Dennis Ainsworth, a Republican real estate investor who’d volunteered to help the Contra cause, informed a U.S. attorney that the top Contra commander “was involved in drug trafficking,” but that the Nicaraguan community was frightened to come forward because “they could be blown away by Colombia hit squads.” Ainsworth said he’d tried to inform the White House about this but “we were put off by Ollie North,” and “I was even physically threatened by one of Ollie North’s associates.” (The U.S. attorney later wrote a memo with Ainsworth’s statements and transmitted it to the FBI.) 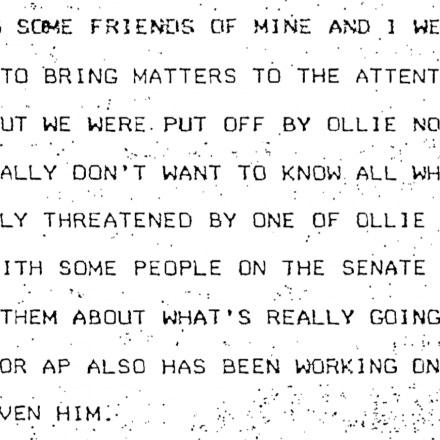 North and the NRA did not immediately respond to requests for comment on this history. When North ran for Senate in 1994, his campaign spokesperson said his involvement with the Bueso case was “old news and garbage and nobody cares about it.” In a 2004 appearance on Fox News, North called a congressional investigation that focused on the Contra-cocaine connection “a witch hunt” with witnesses “who clearly had a political agenda.”

But the extraordinarily sordid nature of North’s past will be clear to anyone who appraises it honestly. In announcing North’s appointment, Wayne LaPierre said there’s “no one better suited to serve as our president,” and he’s correct. Óscar Arias wrote Thursday that the NRA “finds in Oliver North a leader worthy of its mission.” Peter Kornbluh, who was co-director of the Iran-Contra documentation project at the National Security Archive, is even more straightforward: North, he says, is “the perfect pick to further the NRA’s reputation for favoring bloodshed and criminality over responsible gun control and ownership.”