A doctor and Naval reserve officer who examined a high-profile prisoner tortured under Haspel’s supervision urged the Senate to oppose her nomination as CIA director. 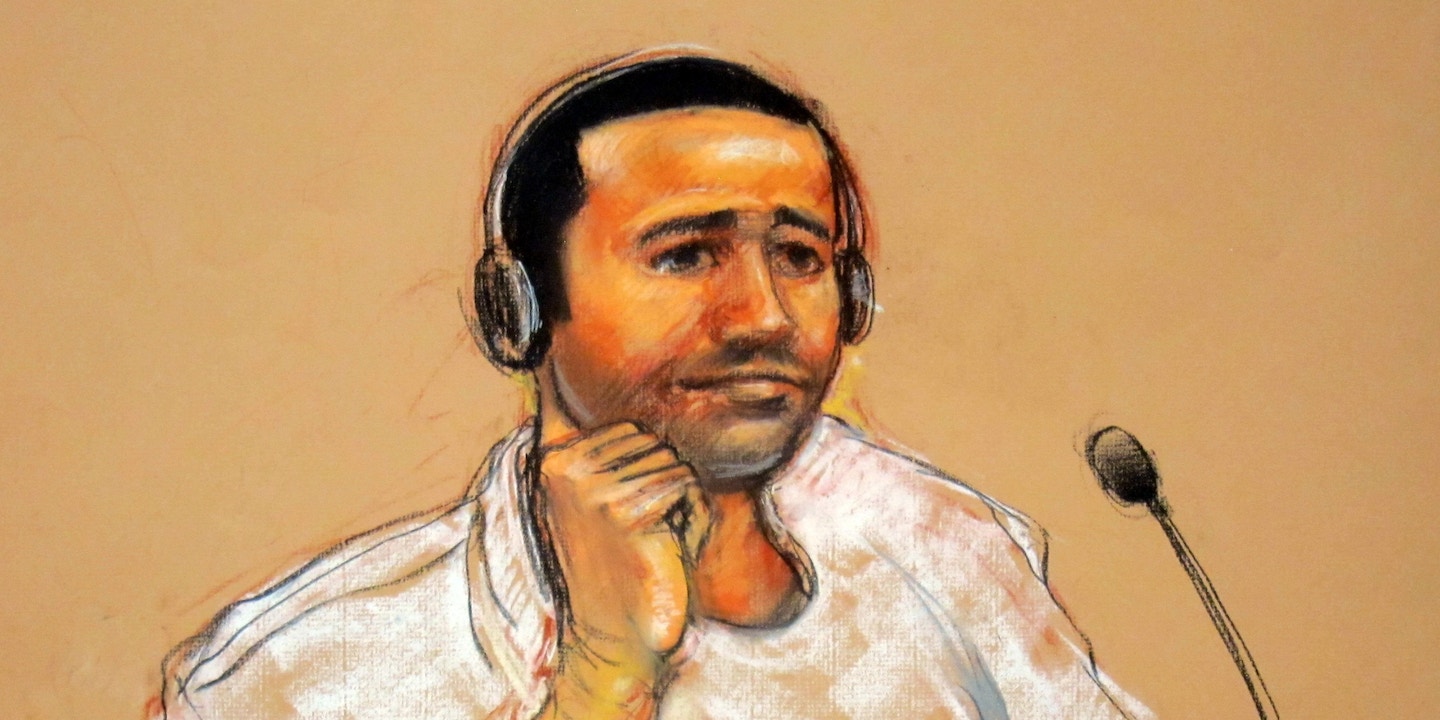 An American doctor and Naval reserve officer who has done extensive medical evaluation of a high-profile prisoner who was tortured under the supervision of Gina Haspel privately urged Sen. Mark Warner, the vice chair of the Senate Intelligence Committee, to oppose Haspel’s confirmation as CIA director, according to an email obtained by The Intercept.

“I have evaluated Mr. Abdal Rahim al-Nashiri, as well as close to 20 other men who were tortured” in U.S. custody, including several who were tortured “as part of the CIA’s RDI [Rendition, Detention, and Interrogation] program. I am one of the only health professionals he has ever talked to about his torture, its effects, and his ongoing suffering,” Dr. Sondra Crosby, a professor of public health at Boston University, wrote to Warner’s legislative director on Monday. “He is irreversibly damaged by torture that was unusually cruel and designed to break him. In my over 20 years of experience treating torture victims from around the world, including Syria, Iraq, and the Democratic Republic of Congo, Mr. al-Nashiri presents as one of the most severely traumatized individuals I have ever seen.”

Nashiri was snatched in Dubai in the United Arab Emirates in 2002 and “rendered” to Afghanistan by the CIA and eventually taken to the Cat’s Eye prison in Thailand that was run by Haspel from October to December 2002. He was suspected of involvement in the 2000 bombing of the USS Cole off the coast of Yemen. He is currently being held at Guantánamo Bay prison.

Despite Crosby’s pleas, Warner and five other Democratic senators have announced their support for Haspel. Warner backed Haspel after she sent him a carefully crafted letter designed to give the impression that she had changed her position on torture while simultaneously continuing to defend its efficacy. “While I won’t condemn those that made these hard calls, and I have noted the valuable intelligence collected, the program ultimately did damage to our officers and our standing in the world,” Haspel wrote. “With the benefit of hindsight and my experience as a senior agency leader, the enhanced interrogation program is not one the CIA should have undertaken.”

Haspel stated that she “would refuse to undertake any proposed activity that was contrary to my moral and ethical values.” But Haspel has refused to renounce torture, her role in its use or to condemn the practice of waterboarding. In fact, under questioning from Sen. Kamala Harris during her confirmation hearing, Haspel explicitly refused to say that the “enhanced interrogation techniques” she oversaw at a secret CIA prison in Thailand were immoral. That fact renders her pledge to Warner meaningless.

“It took her 16 years and the eve of a vote on her confirmation to get even this modest statement, and again, she didn’t say she had any regrets other than it offended some people,” said Sen. Ron Wyden, D-Ore., a member of the Intelligence Committee.

Listen to Jeremy Scahill’s interview with Sen. Wyden on the latest episode of Intercepted:

“I urge Senator Warner to oppose Ms. Haspel, who did not have the courage or leadership to oppose the RDI program,” wrote Crosby. She stated that some of the techniques used against Nashiri are still classified. In her letter to Warner, Crosby stated that among the known acts of torture committed against Nashiri while he was in U.S. custody at several U.S. facilities, included:

(Crosby’s service in the U.S. Naval reserve is not related to her civilian work with victims of torture and, in an email, she made clear that her statements on torture and Nashiri’s case do not represent the Navy or the Department of Defense.)

On Wednesday, Senate Majority Leader Mitch McConnell informed senators that he was fast-tracking the vote in an executive session. “If confirmed, the motion to reconsider be considered made and laid upon the table; the President be immediately notified of the Senate’s action, that no further motions be in order, and that any statements relating to the nomination be printed in the Record,” read an internal email obtained by The Intercept sent to Democratic staffers.

“Today we’re seeing what amounts to a secret confirmation,” Wyden said. He told Intercepted: “I’m worried that if you have a proceeding like this, a nominee confirmed this way with zero meaningful declassification, this is not going to be the last secret confirmation. You will see other nominees coming up, and their record will be covered up as well.”

Wyden blasted the CIA and Haspel for refusing to grant the Senate full access to Haspel’s record and choosing instead to provide carefully declassified information intended to burnish Haspel’s image. “I want the American people to know that the agency is covering up her background. They’re covering it up because they’re trying to prevent what I think is the threshold issue of accountability … because if the American people knew what I know, I believe the Senate would have no choice but to reject her confirmation,” he said, pointing out that as acting director, Haspel is in charge of what the senators see and don’t see about her record. “She started with an enormous institutional advantage — I don’t know of a similar instance where the nominee gets to decide what is declassified about her and what isn’t.”

In a statement provided to The Intercept, Yasmine Taeb, senior policy counsel at the Center for Victims of Torture, said, “It’s outrageous that Republican leadership is fast tracking this vote. The Senate cannot fulfill its constitutional ‘advice and consent’ responsibilities when the Senate lacks meaningful access to all the documents relevant to this nomination, and when the public — whose job it is to hold their elected representatives accountable — remains largely in the dark.” Senators have also asked for more detailed information on Haspel’s role in the destruction of 92 video recordings of “enhanced interrogations” conducted in Thailand.

In a May 7 briefing to Senate Intelligence Committee staffers, also obtained by The Intercept, Crosby asserted that during Nashiri’s torture “unauthorized techniques were always used with authorized techniques.” Crosby stated that she could not discuss these “unauthorized techniques” because they remain classified. She cited a public statement from one of the CIA contractors who developed the enhanced interrogation program, psychologist James Mitchell, who said he witnessed an interrogator “dousing Nashiri with cold water while using a stiff, bristled brush to scrub his ass and balls and then his mouth and then blowing cigar smoke in his face until he became nauseous.” She offered to brief senators with appropriate security clearances on other classified unauthorized techniques.

“The bottom line on the Haspel nomination,” said Wyden, “is that the vast amount of information about her background could be declassified without compromising sources and methods, and that really does a disservice to the American people.”

Crosby told Senate staffers that the CIA’s “methodology consisted of strategic assaults — multiple traumas inflicted simultaneously, as well as consecutively, in a manner designed to instill terror and maximize harm in the prisoners.” The interrogation program, she stated, showed that “torture is not just a crime of physical violence, but a way of destroying someone’s humanity.” Crosby added: “It is important to note that the barbarity of the torture methods used were shrouded and concealed in sterile euphemisms.”

In the briefing, Crosby described the torture in graphic, albeit unclassified, terms:

The terror of being kept naked in pitch-black, shackled to the ceiling while music blared, covered in urine and feces while insects crawled on their bodies, in dank cells that were freezing cold or unbearably hot. The horrific conditions in between interrogations were in some cases as bad as the interrogations. These torture methods were inflicted for hours and days, for weeks at a time, over the course of years. The men became disoriented with no sense of when the abuse would stop. Some of the men wished for death.

She concluded her briefing: “The devastating human cost to this torture program cannot be overstated. Unfortunately, this toll is largely hidden due to ongoing secrecy and control that the CIA exercises. This is what I can say due to security restrictions.”

Crosby, who is currently at the Guantánamo prison examining Nashiri, told The Intercept that she could not offer further details because they are classified and, for the same reason, cannot speak about Haspel’s specific role in Nashiri’s torture. However, a brief prepared by Crosby’s organization, Physicians for Human Rights, asserts:

The CIA site in Thailand formed the blueprint for the rest of the CIA torture program. After her assignment there, Haspel continued to hold senior operational roles in the program, where presumably she would have been in a position to know about other abuses at other sites. Moreover, she was an enthusiastic supporter of the program and worked to protect it from criticism. This included drafting a cable ordering the shredding of videotapes depicting torture sessions, despite a court order staying their destruction. This act of cover-up should have led to Haspel’s dismissal – and should most certainly disqualify her from the role of leading the CIA.

On Monday, The Intercept reported that a senior Warner adviser wrote an email to Democrats on the Intelligence Committee informing them that a classified memo compiled by the committee’s minority staff and aimed at examining Haspel’s full involvement with torture and destruction of evidence was removed from the Senate. It was supposed to be housed in a secure facility inside Congress, so senators and their staff could read it before voting on Haspel’s nomination.

That memo, according to Democratic sources, provided classified details on Haspel’s role in torture, the destruction of evidence, and her tenure more broadly. The memo was based in part on the investigation conducted by U.S. attorney and special prosecutor John Durham into CIA activities following the September 11 attacks. On the eve of the committee vote on her confirmation, that memo was moved out of the U.S. Congress and Warner’s office said senators needed to ask his office in order to arrange to see it. Democratic sources have told The Intercept that few senators have read the classified memo.

On Wednesday, 10 Democrats on the Senate Judiciary Committee wrote to Attorney General Jeff Sessions requesting that he provide the “Durham report” to the committee, saying that it falls under its jurisdiction over “compliance with laws against torture, as well as potential violations of the Freedom of Information Act.”

Top photo: An artist rendering created on Nov. 9, 2011, and reviewed by the U.S. military, shows Abd Al Rahim al-Nashiri, who was accused of setting up the bombing of the USS Cole, depicted during his military commissions arraignment at the Guantánamo Bay detention center in Guantánamo, Cuba.