The counting of ballots on Saturday seemed to confirm two exit polls which found that close to 70 percent of Irish voters supported lifting a ban on abortion. 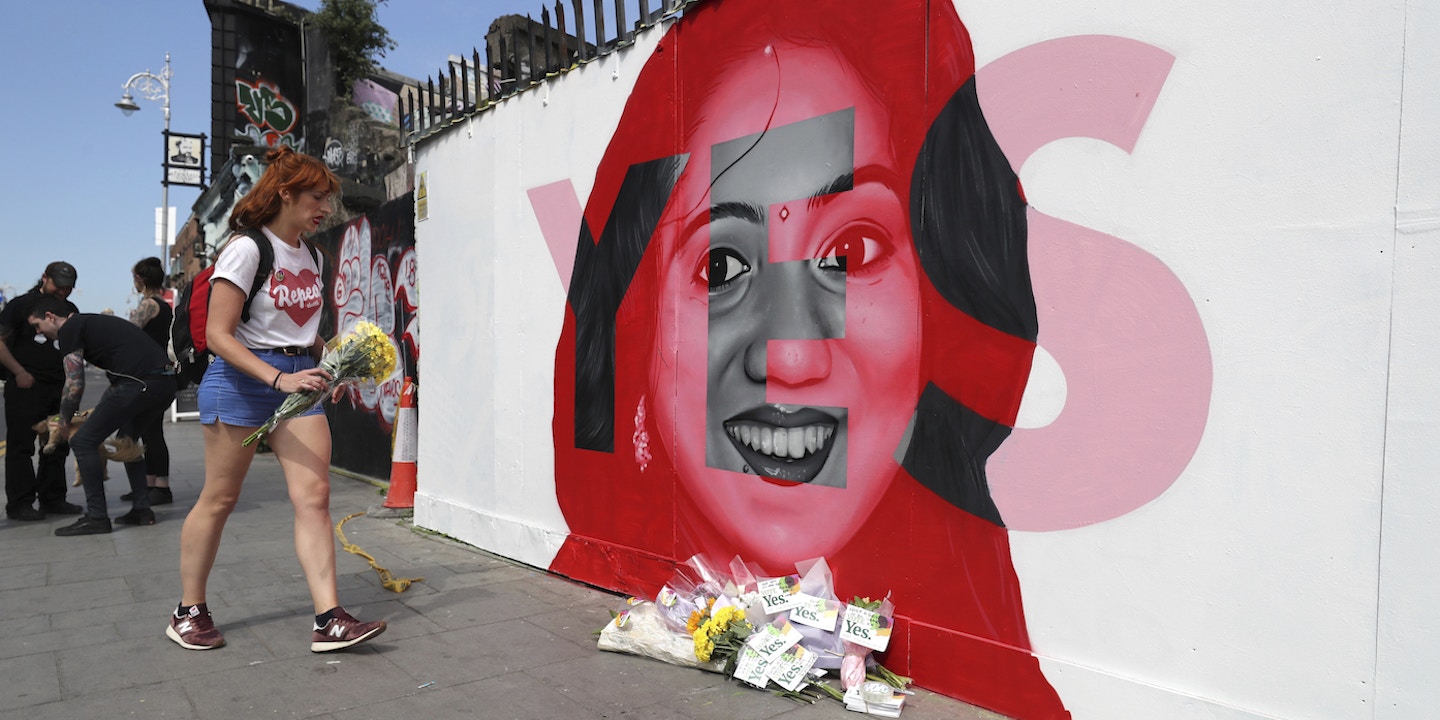 Defying all expectations of a close contest, exit polls in Ireland predicted that the nation voted overwhelmingly on Friday in favor of repealing a near-total ban on abortion in a referendum.

As the ballots were counted Saturday, tallies from around the country seemed to confirm the accuracy of those surveys, conducted outside of polling stations the day before by the country’s leading newspaper, the Irish Times, and its state broadcaster, RTÉ. Both exit polls found that close to 70 percent of the electorate had supported lifting the ban.

If confirmed by the final count, expected Saturday evening, the result indicated by the exit polls — with margins of error of just 1.5 and 1.6 percent — would mean the immediate repeal of the Eighth Amendment to Ireland’s constitution, which has, since 1983, prohibited the government from legalizing abortion in any circumstance — even in cases of rape, incest, or fatal fetal abnormality.

This is #Goleen one of the most beautiful parts of Ireland and it doesn't get more rural. The conservative rural Ireland narrative is clearly with O'Leary in grave (it has been for some time) #8thref #cksw pic.twitter.com/AqQT4IRAS4

I’m happy to call it for YES.

It will be a landslide. Welcome to a more caring compassionate Ireland.@Together4yes @labour pic.twitter.com/hulWQq5vIj

Called into my local count in my hometown of Greystones. Have always known my constituents to be compassionate. Results bear that put - 82% in Greystones box, 83% in Delgany box and around 75% throughout all the county #togetherforyes

The scenes as our Directors Orla, Grainne and Ailbhe enter the RDS, we have news that #together4yes has just crossed 1 million votes tallied with 67.6% Yes (and it was Clare reporting a 64% yes that brought us past the 1 million!) #together4yes pic.twitter.com/I5HxISlwcD

Roscommon MEP Luke Flanagan as tallies show county is 57% in favour of abortion repeal
"Without doubt it’s probably one of the most difficult areas to get the ‘yes’ vote out, but we’ve done it and we’ve shown that Roscommon is living in the modern world"https://t.co/wHo6NJM5MH

The referendum result would appear to indicate a sea change in Irish attitudes toward women’s rights in the intervening 35 years since the ban on abortion was enshrined in Ireland’s constitution, with the support of 67 percent of the nation’s voters in 1983.

Take the piss out of millennials all you want, we may never own property but we’re sure as Hell gonna own our own bodies https://t.co/PWPtfH7QPC

RTE poll such a fascinating glimpse into Ireland. Shows major change in attitude took place years ago. No urban major rural divide, no major age divide. 76% said they had not changes their mind on abortion in the past five years

News of the exit polls and the preliminary vote count stunned and delighted supporters of abortion rights, who had been braced for disappointment despite surveys that showed broad support for the government’s proposal to repeal the amendment and introduce legislation that would permit Irish women to have abortions up to 12 weeks after conception.

Ireland - you are just stunning. A kind, compassionate, critical thinking electorate that won’t be duped or bullied. Well done everyone, well done.

That’s a mandate to not just repeal it but to burn to the ground everything it stood for.

Tomorrow, let’s stop talking about an Ireland that doesn’t exist. Let’s stop platforming relics of the past. We know who we are.

For all the attempts to divide us into tribes, the exit poll shows that every part of Ireland has voted in broadly the same way, which is to trust women and make them fully equal citizens. #repealtheeigth

I’m not that surprised by the exit polls. That was the most powerful, honest, informed, soul-bearing and brave grassroots political movement that I’ve ever seen. I am in awe.

What comes out very strongly from the Exit poll data is just how far the "middle ground" has shifted. Irish citizens are far ahead of the political class and arguably the media too.

Credit due to Taoiseach @campaignforleo for delivering on promise to put issue to the people, something his predecessors were too cowardly to. He should interpret from result too a mandate to remove our schools from Church control. #RepealedThe8th

At the end of an emotional campaign, marked by personal accounts of the pain and suffering caused by the abortion ban, many Irish people reported crying tears of joy at the apparent revelation that the repressive Ireland they had grown up in was, as one put it simply, “dead.”

My mom just phoned me bawling crying. This means so much to so many women.
Thank you to every single person who voted today - we are going to wake up tomorrow to a kinder, more compassionate, and more progressive Ireland.

I'm literally just sitting here crying thinking of the thousands of Irish women who went through hell because of the eighth. No more, no more. G'wan Ireland. #Repealthe8th #Together4Yes

Lads, I’m now crying in a book shop in Portland. I’m so happy the Ireland I love has shown how much it loves and respects women. #repealth8th #togetherforyes

“I have no doubt whatever that, when the iceberg melts Ireland will become an exceedingly tolerant country.” - W.B. Yeats, June 11, 1925

It’s taken a while but the thaw is almost complete.

The account of one such woman, Saoirse Long — who described, on YouTube and Irish television, her difficult journey to England to have an abortion — was an emblematic moment in the campaign, according to Naomi O’Leary, a journalist whose Irish Passport podcast is an essential guide to a rapidly changing Ireland.

I think Saoirse and the shocked gasps at Ronan Mullen's response to her story is a standout moment of this campaign #pkshow pic.twitter.com/ZRuohwIeOl

The joy for many “yes” voters was tempered by memories of women whose lives were damaged or cut short by the ban — particularly Savita Halappanavar, an Indian dentist who died in 2012 because doctors in the west of Ireland had refused to perform an abortion to save her life during a three-day miscarriage. A shrine dedicated to her sprang up in Dublin on Friday, adorned with flowers and messages from those who voted “yes” to the proposed repeal of the Eighth Amendment.

Her tragic death shocked a generation. She was a victim of the 8th, & of a system where, as @merj_ireland remind us, 40% of maternal deaths are migrant women. We remember Savita today, and to quote her father Andanappa, by voting Yes we'll pay "a great debt to her departed soul" pic.twitter.com/nzcEr2ndQI

The scene at Savita’s mural in Dublin’s Portobello as polls closed in Ireland’s abortion referendum pic.twitter.com/VAbVPSpCgi

I'm thinking of Savita tonight & her husband & amazing parents. This is for you Savita, for every woman imprisoned in laundries, every woman who travelled in fear to get the medical treatment they deserved. Never again will we allow this to happen ?? #RepealThe8th

Crowds gather at Savita mural in Dublin
via @IrishTimeshttps://t.co/P6DPujhR4i

It was for you. We never forgot, or forgave #repealEDthe8th pic.twitter.com/2n4rCxRISN

Ireland’s transformation into a more pluralistic society in recent years was also an important factor in the result. The referendum on abortion rights, prompted in large part by a wave of outrage over the death of Halappanavar, an immigrant, was called by the son of another, Taoiseach Leo Varadkar.

Speaking to the state broadcaster on Saturday, Varadkar, the Irish prime minister, called the vote, “a culmination of a quiet revolution that’s been taking place in Ireland.”

"What we have seen today is a culmination of a quiet revolution that's been taking place in Ireland " - Taoiseach Leo Varadkar pic.twitter.com/sPxnsVWEA7

“It seems it is going to be a greater than two-to-one majority,” Varadkar added. “A majority of men and women, almost all age groups, almost all social classes, and perhaps every constituency in the country, and that says to me that we are a nation that’s not divided, we are actually a nation that is united, that we want to make this change.”

As the result became clear, several campaigners suggested that the next phase in their struggle would be an effort to extend abortion rights to northern Ireland, where political leaders, in thrall to old-fashioned ideas of Christianity, also appear out of step with a changing population.

Northern Ireland, we're coming for you next.

Update: May 26, 2018, 11:35 a.m. EDT
This report was revised as ballots were counted across Ireland and seemed to confirm exit poll predictions.

Top photo: Supporters of abortion rights in Dublin laid flowers beneath a mural dedicated to the memory of Savita Halappanavar, an Indian dentist who died during a miscarriage in the west of Ireland in 2012 because doctors refused to terminate her pregnancy to save her life.