Seen widely as a bastion of stability in the Middle East, Jordan is facing a round of protests. 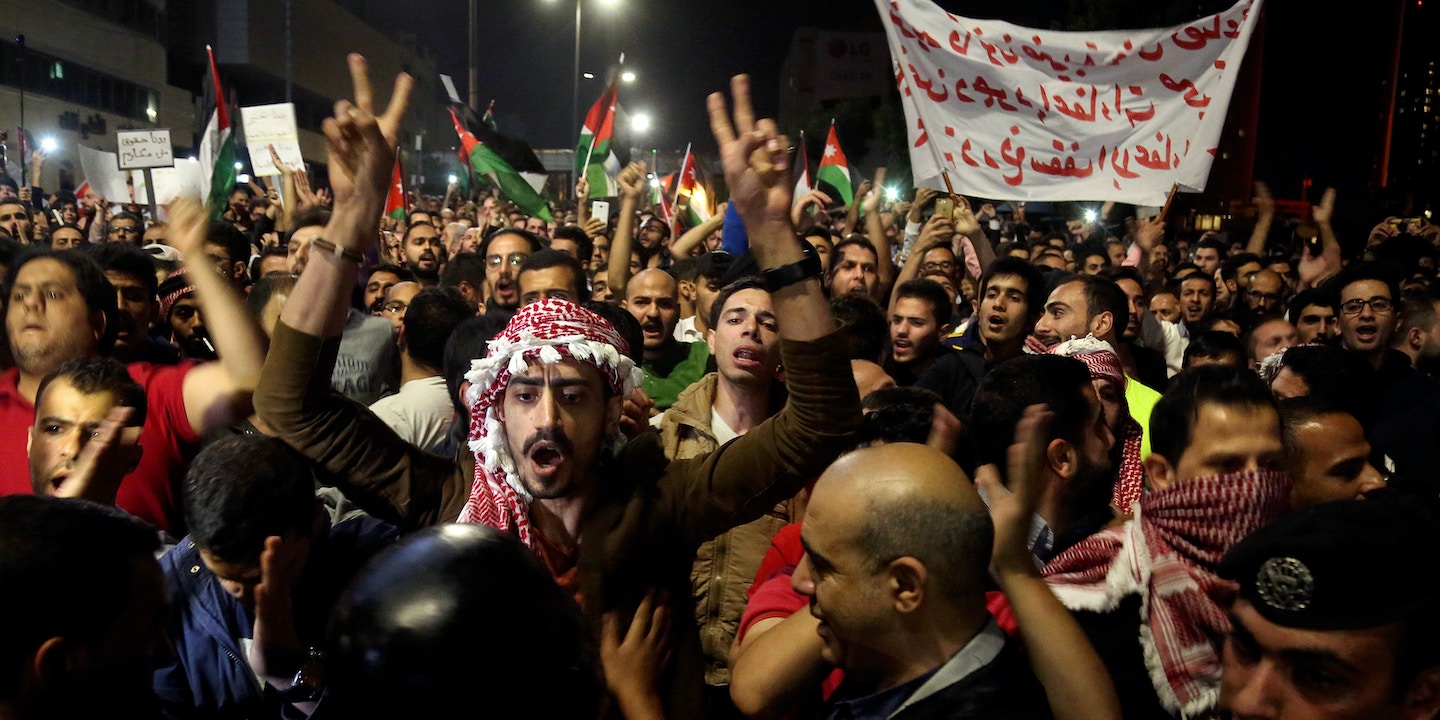 For the past week, Jordan, a country frequently touted by the West as a haven of stability in a chaotic region, found itself amid an uncharacteristic tumult. Protests erupted on May 30 with the announcement of International Monetary Fund-backed austerity measures, including a steep hike on taxes for Jordan’s cash-strapped, underemployed populace. After five days of widespread strikes and marches, Jordan’s King Abdullah II dismissed Prime Minister Hani Mulki on Monday. In the past, such symbolic moves have been enough to placate dissent, but this time, Jordanian protesters appear determined to hold out for more systemic change.

Hours after Mulki’s dismissal, thousands of demonstrators returned to the streets, calling for a full rollback of the proposed austerity measures. Among them was Mustafa al-Khalili, a 29-year-old engineer living in Amman. This week, as a first-time protester, al-Khalili has found common cause with Jordanians across socio-economic, tribal, and geographic divides. “People from every part of society are out together,” he told The Intercept in a phone interview. “We are united by one thing: We love our country and we are fed up with corruption.”

Last Wednesday, al-Khalili and his co-workers received an email from union leaders alerting them that their government was considering a new bill to raise taxes. Al-Khalili was outraged. As a young father in Amman, one of the Middle East’s most expensive cities, he was already struggling to make ends meet. The new law — which would raise income taxes on individuals by at least 5 percent and on companies by 20 to 40 percent — would surely push him, and many of his fellow citizens, over the brink. “So many of us are working full-time jobs and still just trying to meet our basic needs,” he said. “And many of us are were getting desperate even before this new bill.”

“It was actually a beautiful moment, because there were Jordanians from all different classes, all different professions, and women as well as men.”

News of the proposed tax increase spread swiftly, igniting outcry on social media across socio-economic classes. Many protesters accused the government of corruption and failing to protect Jordanians from the interest of foreign bodies like the IMF, which is seeking to reform Jordan’s deeply indebted economy. Within hours, over 30 labor unions had called for a strike, and thousands of workers walked off the job in protest. Al-Khalili joined the hundreds who took to Amman’s busy streets to demonstrate. “It was actually a beautiful moment,” said al-Khalili, “because there were Jordanians from all different classes, all different professions, and women as well as men. It was the love of Jordan that brought us out to the streets.”

The initial strike gave way to a campaign of nightly protests, centered in Amman’s Fourth Circle neighborhood, calling for a reversal of the austerity measures and the resignation of Mulki, who was widely seen as corrupt. Yet the problem runs deeper than any one person, said al-Khalili, who has continued to protest night after night. “The Parliament does not reflect the needs of the people,” he said. “They are more interested in enriching themselves than innovating and trying to fix our economy. And we make the mistake of electing these people again and again. Well, now we are saying: Enough!” Jordanian gendarmes and Jordanian security forces are on high alert in the capital of Amman, in the early hours of June 5, 2018.

So far, security forces have generally shown restraint while containing the crowds, Hiba Zayadin, acting researcher for Human Rights Watch in Jordan, told The Intercept. Scattered arrests are usually followed by quick releases. “There have been a few shows of force here and there, and a few people have lost consciousness due to lack of oxygen in the crowd, but so far, the demonstrations have been largely peaceful,” she said.

The restraint may go both ways. Despite some chants that include calls for the government to fall, many protesters are adamant that they are not aiming to create “another Syria or Libya or Iraq,” says al-Khalili. Demonstrators tended to focus their anger on the parliament, the IMF, and other outside forces, stopping short of denouncing the monarchy. “The king is very important to stability, to uniting the different tribes and families. But he wants to work with us to stop corruption,” said al-Khalili. “What we need is representatives and a prime minister who are actually serious about fixing the economy, and who don’t get pushed around by lenders like the IMF.”

News of Mulki’s resignation gave a morale boost to protesters, but it did not bring any resolution on the issue of the austerity measures.

News of Mulki’s resignation gave a morale boost to protesters, but it did not bring any resolution on the issue of the austerity measures. Union leaders have called for a nationwide strike on June 6 and announced Monday that the planned strike would continue despite the prime minister’s ouster. Demonstrators vowed to continue protesting until the government walks back the austerity measures for good. “The message is much bigger than any one person, or even one bill,” Eyad Omari, a Jordanian investment banker who has attended the protests, told The Intercept. “Jordanian people are telling the parliament that things have changed. Now, if you want to be in our government, you have to serve our interests. We want them to know we are watching them.”

Many outlets have reported that Abdullah has tapped Omar Razzaz, the current education minister and former World Bank officer, to replace Mulki. For the moment, however, there is no clear word as to the fate of the austerity bill. Omari is hopeful: “Razzaz is a well-educated man, and I think there’s a chance he could really bring some good solutions.” Other protesters have their sights set on more drastic change in Jordanian leadership. On Monday night, chants of “No to Mulki, no to Razzaz” could be heard.

As thousands gear up for Wednesday’s full-day strike, al-Khalili hopes this week’s political flurry stirs his compatriots toward more sustained political engagement. “It’s something totally new for many of us,” he said. “We stood up to the government, and we made the government do something it didn’t want to do. Now, suddenly, people see they have power. They can draw the line.”

Top photo: Protesters gather for a demonstration outside the prime minister’s office in Amman, early on June 5, 2018.