The phrase “lying press,” or Lügenpresse, is a term of abuse used by Nazis decades before Donald Trump convinced himself he invented the insult “fake news.” Russians are proud of the role their nation played in the wartime defeat of Nazi Germany, which makes it all the more extraordinary that this week a YouTube channel associated with Russian state television borrowed an insult from the Nazi lexicon to deride an Austrian journalist who challenged President Vladimir Putin in a combative interview.

While Western journalists expressed their admiration for reporter Armin Wolf’s grilling of the Russian president for nearly an hour, Vesti News, which adds English subtitles to reports from the Russian state broadcaster, headlined a segment on the encounter: “The Lying Press: Putin Absolutely Destroys Dishonest Austrian Journalist During State TV Interview.”

The phrase “lying press,” or Lügenpresse in the original German, is a term of abuse for the free press first made popular by Nazis in the 1930s to dismiss critical reporting on their fascist movement. In recent years, the slur has been chanted by Germany’s resurgent far right at rallies against Muslim immigrants and flowed seamlessly through “alt-right” networks to the United States, where it was hurled at reporters in 2016 by supporters of Donald Trump.

Trump himself, having lied for decades that his German-born grandparents were Swedish, prefers the more modern term “fake news,” which he falsely claims to have coined.

The use of a term popularized by the Nazis by an outlet that describes itself as “the official channel” of the Russian state broadcaster on YouTube seems to illustrate that the alliance of far-right, nationalists Steve Bannon calls “a global Tea Party,” also exists online, as a sort of alt-right international.

The report from the state news channel Russia 24 attacking Wolf portrayed the journalist as ill-informed and rude for refusing to allow Putin to filibuster or dodge his questions. In a blog post about his preparation for the interview, Wolf wrote that one of Putin’s go-to moves when confronted by a journalist who refuses to let him off the hook is to complain loudly and often about being interrupted and criticize the interviewer “as rude, impatient, or biased.” A screenshot from Russian television shows President Vladimir Putin complaining about being challenged by the Austrian journalist Armin Wolf.

Although Russia 24 did broadcast the entire interview, its subsequent report on the exchange, and a heavily edited version of the interview broadcast on RT, the Kremlin’s English-language channel, showed Putin using exactly this tactic to suggest that Wolf’s tough questioning was aggressive and inappropriate. 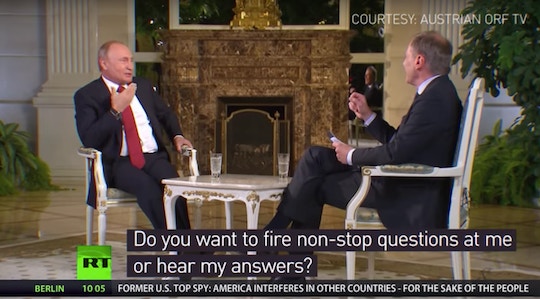 Wolf also revealed that a condition of the interview dictated by the Kremlin was that the Russian government could record and broadcast its own versions of the exchange, which it did across broadcast and social media platforms throughout the day on Tuesday.

The Kremlin, through its official broadcast channels and friendly social media outlets, has previously employed the same tactic to undermine the credibility of foreign reporters, like Megyn Kelly of NBC News and John Simpson of The BBC, when they challenge Putin.

One pro-Kremlin website, Russia Insider, featured a section of the recent Austrian TV interview in which Putin deflected questions about why the opposition leader Alexei Navalny was barred from running against him for the presidency by deriding the anti-corruption activist as “a clown.”

The attempt to discredit Wolf over an interview conducted on the eve of Putin’s state visit to Austria on Tuesday was also interesting because the journalist is a hate figure for members of Austria’s far-right Freedom Party, which has a formal alliance with United Russia, the president’s own party.

That alliance was sealed in a formal signing ceremony in Moscow in 2016 attended by Freedom Party leader Heinz-Christian Strache, who is now Austria’s vice chancellor. Wolf’s employer, the Austrian state broadcaster ORF, filed a lawsuit against Strache in February after he shared a Facebook meme calling Wolf a liar and comparing him to Pinocchio.

The meme, which Strache first described as a joke and then deleted from his Facebook page, showed Wolf over the words, “There is a place where lies become news. That place is ORF.”

In the interview, Putin bristled when Wolf suggested that United Russia’s supported the Freedom Party was part of a broader strategy “to maintain links with nationalist parties because they want to divide the European Union.” On the contrary, the Russian president insisted, United Russia maintained ties with pro-Russian parties in Europe mainly because they are most willing to take a “pragmatic” approach, a term the Kremlin frequently uses to call for Western powers to remove sanctions on Russian businesses.

Updated: Sunday, June 10, 8:26 a.m. EDT This column was revised to add a link to a version of the Austrian state broadcaster ORF’s interview with President Vladimir Putin of Russia with English subtitles, and to clarify that the attack on the journalist who conducted it is a familiar Kremlin tactic.

Top Photo: Russian President Vladimir Putin during an interview with the Austrian television journalist Armin Wolf at the Kremlin in Moscow.