“Save Our Tips,” the Campaign Against D.C.’s Minimum Wage Hike, Is Run by a Trump Consultant

By cloaking its opposition to the wage increase in lefty rhetoric, “Save Our Tips” hopes it can trick D.C. voters into taking down a progressive policy. 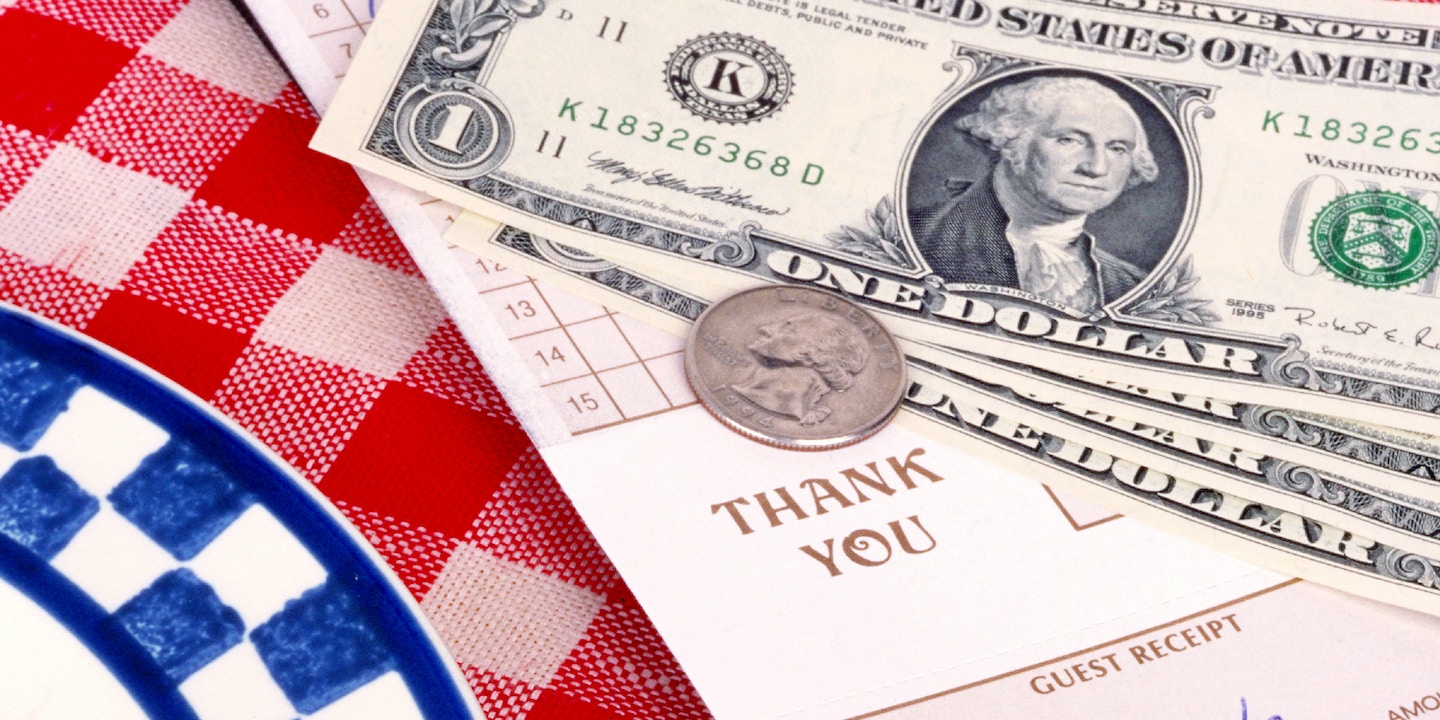 The restaurant lobby is making a masked pitch to kill Initiative 77, a ballot measure designed to gradually raise the minimum wage in Washington, D.C., for bartenders, waitstaff, and other “tipped” employees, to $15 an hour by 2025.

The current federal floor for “tipped” workers — defined as employees who receive at least $30 a month in tips — is $2.13 per hour. Tipping, originally embraced by Reconstruction-era Americans as a way to avoid paying salaries to newly freed slaves, now supports a two-tiered system in which tipped workers experience some of the lowest pay of any industry. (Waitresses are twice as likely to use food stamps than the general population).

But you’d never glean any of that from the restaurant lobby’s pitch. In fact, the group opposing the minimum wage calls itself “Save Our Tips – No on 77″ and has campaigned with left-leaning voters in mind. On Twitter, the Save Our Tips campaign claims that they oppose President Donald Trump, support the Democratic resistance, and routinely suggests that the group exists primarily to represent the interests of employees. The campaign recently tweeted: “We can all agree with #DumpTrump. But ‘Vote No’ June 19th.”

But in contrast with the goals of most voters, regardless of political orientation, if Initiative 77 fails, the current law will cap the D.C. tipped minimum at $3.33, to increase only to $5 by 2020. (The non-tipped minimum wage is $12.50 an hour, rising to $15 by 2020.) By cloaking its opposition to the wage increase in lefty rhetoric, the campaign hopes it can trick D.C.’s overwhelmingly liberal voter base into voting down a progressive policy.

Disclosures show that the Save Our Tips campaign is managed in part by Lincoln Strategy Group, a company that did $600,000 worth of work in 2016 canvassing for the Trump presidential campaign. Lincoln Strategy Group is a firm co-founded and currently managed by Nathan Sproul, a GOP consultant and former executive director of the Arizona Christian Coalition, who has been caught up in scandals for well over a decade.

In 2016, Sproul was accused of mobilizing a fake grassroots effort to undermine the Consumer Financial Protection Bureau, the agency charged with protecting consumers from exploitation by financial companies. Sproul’s faux consumer group Protect America’s Consumers paid for advertisements attacking the agency, using out-of-context critiques of discreet aspects of the agency from Democrats to give the impression of bipartisan opposition to the agency as a whole.

The effort to defeat Initiative 77 is similarly deceptive. Misleadingly named Save Our Tips – No on 77, the campaign has claimed that any hike in the tipped minimum wage will force restaurants to close and put employees out of work. But that hasn’t been the outcome in California, Alaska, Nevada, Oregon, Washington, and Minnesota — states that have abolished the tipped minimum wage and allowed restaurant workers to collect wages as high as $15. A spate of restaurants in the Bay Area of California has indeed closed since minimum-wage rules have been implemented, but observers note that businesses are facing a range of challenges, particularly as rising housing prices have driven out the kind of workers who make up a waitstaff. San Francisco restaurant managers are having a hard time finding and retaining staff, which, according to the law of supply and demand, means that wages are still too low, not too high.

The No on 77 campaign has underscored the claim that the initiative will hurt restaurant workers. A low, sub-minimum tipped wage, they argue, is crucial to maintain the practice of tipping. “Restaurant workers would lose out on the tips that make it possible for them to live and work in the city if Initiative #77 passed,” the campaign tweeted. Despite the claim, cities that have abolished the tipped minimum in favor of a higher wage have continued to tip. In San Francisco, where the minimum for all hourly workers, including bartenders and servers, is currently $14 an hour (and will become $15 an hour on July 1), diners pay an average 19 percent tip rate, according to the Golden Gate Restaurant Association. The tipping rate in D.C. is 14.8 percent. 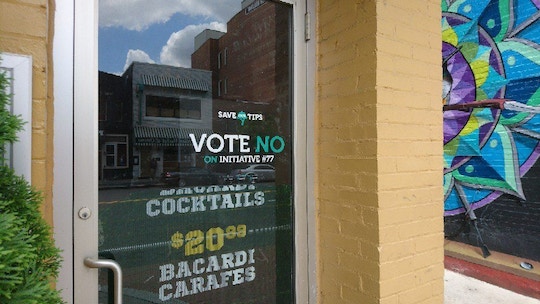 D.C. restaurant Ben’s Next Door is one of several in the city showing their stance against Initiative 77 through window signs.

Most of the restaurants and associations funding the campaign come from prosperous northwest D.C. and the capital’s upscale suburbs. The K Street-based Restaurant Association Metropolitan Washington gave $15,000 toward the campaign; Clyde’s Restaurant based in Georgetown gave $5,000.

On behalf of restaurant employees, the group that organized Initiative 77 is the Restaurant Opportunities Center, a worker advocacy nonprofit. The group has campaigned against exploitative work conditions, including wage theft and sexual harassment on the job.

But in many ways, the ROC appears to be outmaneuvered. Prominent local politicians and celebrity chefs have expressed opposition to Initiative 77, while “Save Our Tips” signs against the measure are now a ubiquitous presence in restaurants and bars across the city.

Diana Ramirez, an organizer with ROC who is working on the Initiative 77 campaign, told The Intercept that many workers feel intimidated by the campaign that D.C. restaurants are waging and are afraid to speak up in support of it. “The restaurants are pushing this and fearmongering their employees. They’re holding captive audience meetings, pre-shift, on the clock, telling their employees, ‘This is going to hurt you,'” she said.

The disclosures also show that national restaurant interests representing major fast food chains are helping to drive the debate: The National Restaurant Association is by far the largest donor to the No on 77 campaign, having provided $25,000 of the $58,550 raised by the campaign to date.

The NRA is a trade association that represents corporate interests, including McDonald’s Corporation, Yum! Brands, Burger King Corporation, Darden Restaurants, and other multinational restaurant chains. As part of its nationwide advocacy efforts, the NRA typically opposes any sort of minimum-wage increase, as well as any effort to require paid sick time or parental leave. It spends as much as $98 million a year to advance the industry’s political agenda.

Notably, the NRA funded the lobbying group that won a carve-out against tipped workers in 1996, ensuring that restaurant workers were exempted from the increase in the federal minimum wage. The group at the time was led by Herman Cain.

While opposing efforts to raise the wages of the nation’s lowest-paid employees, the NRA paid its CEO, Dawn Sweeney, more than $3.8 million in total compensation, including a bonus of $1.7 million. If her total compensation were computed hourly, it would amount to $1,867.88 per hour (as of four years ago) — a sum which would take a minimum-wage worker 247 hours, or six weeks of full-time work, to earn.

While the NRA and some D.C. restaurants have launched their own local campaign against Initiative 77, the business-backed Employment Policies Institute think tank set up a website seeking to debunk the ROC’s claim about the tipped credit.

The Employment Policy Institute recently posted a mailer on its website, suggesting that it is directly targeting voters to persuade them to oppose Initiative 77. The think tank is a project of Rick Berman, a corporate lobbyist skilled in engineering campaigns against public interest groups (one of his frequent targets is the Humane Society) and organized labor.

Jared Bernstein, an economist at the Center on Budget and Policy Priorities and a former adviser to former Vice President Joe Biden, doesn’t buy the apocalyptic vision being offered by the restaurant lobby about Initiative 77.

“In the eight states that have abolished sub-minimums, we haven’t seen anything like the claims that the opposition puts forth,” he told The Intercept. In a recent op-ed in the Washington Post, he noted that restaurant workers in these eight states earn around 20 percent more than workers in states where the tipped wage is the federal minimum of $2.13 an hour.

Opponents of Initiative 77 claim that customers will reduce tips if restaurants are compensating tipped workers with the full minimum wage. Bernstein said he hasn’t seen any comprehensive research on tipping behavior in jurisdictions that have eliminated the tipped wage, but that overall data on income and poverty in those places shows that workers are not being hurt.

“What we do have are studies of poverty rates, income, and wages,” he said. “If tipping were negatively effected as opponents say, we wouldn’t be seeing the results we’re seeing on the poverty, wage side.”

David Cooper is an economist at the Economic Policy Institute who has spent years studying the tipped minimum wage. “I don’t claim to be able to see the future and to say definitively what would happen if this should pass, but it’s not like there aren’t any other places that have done away with their lower tipped minimum wage,” he noted.

“In those places, there still are restaurants, customers still tip when they go into those restaurants, and in fact, servers in those states make on average about 17 percent more per hour than tipped workers in states that have a lower minimum wage.”