Trump tried to show Kim how great life could be if he surrendered his nuclear weapons. 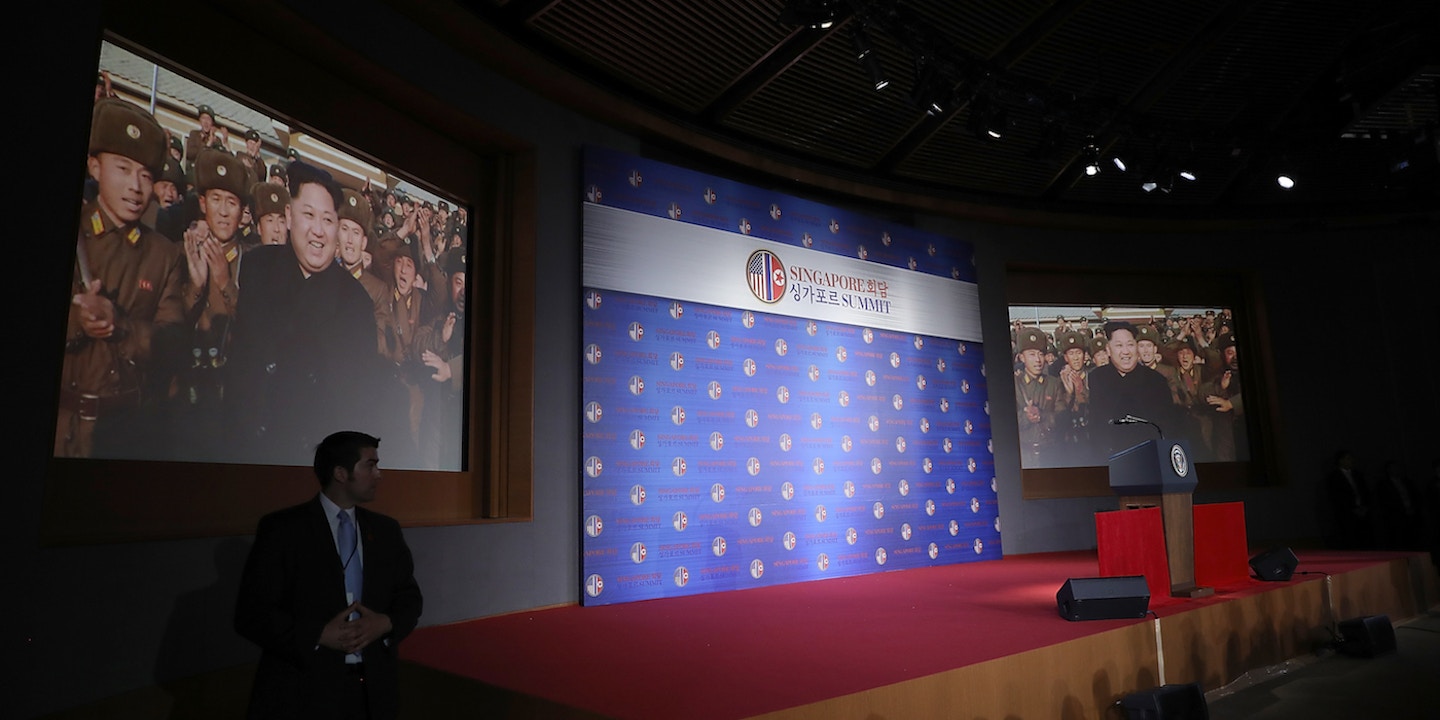 Despite Donald Trump’s boasts about his deal-making prowess, his meeting with Kim Jong-un in Singapore on Tuesday ended with no agreement from North Korea to surrender its nuclear weapons. Instead, Kim signed a declaration reaffirming his commitment “to work toward complete denuclearization of the Korean Peninsula,” the same vague aspiration his grandfather, Kim Il-sung, had agreed to 25 years ago.

But at a news conference after the summit, Trump revealed how he tried to sell Kim on the benefits of trading North Korea’s nuclear arsenal for sanctions relief and the promise of good relations with the outside world. A key element in his pitch, Trump told reporters proudly, was a propaganda video produced by the White House in the form of a Hollywood movie trailer, which Trump personally screened for Kim on an iPad.

The four-minute trailer for an imaginary movie about how great life would be in North Korea if Kim surrendered his arms to Trump — attributed to the invented studio “Destiny Pictures” — was also screened for reporters before the American president took the stage.

A propaganda video produced by the White House was screened for reporters in Singapore on Tuesday before Trump’s news conference.

(Because it is impossible to invent anything more absurd than the actual Trump presidency, there is, of course, a real Destiny Pictures in Hollywood, but its founder, Mark Castaldo, confirmed to The Intercept that his company played no role in the production of the White House sales pitch.)

Trump himself later revealed that the video he screened for Kim was titled, “A Story of Opportunity.”

Here is the video, “A Story of Opportunity” that I shared with Kim Jong-un at the #SingaporeSummit
??https://t.co/43oOci4jvo pic.twitter.com/xBKFkDLtj7

The heavy-handed pitch, perhaps modeled on previous clips promoting Trump’s own real-estate ventures, was clearly designed to appeal to Kim’s vanity by including references to what little is known about him. So for instance, when the narrator describes the biopic as “a story about a special moment in time when a man is presented with a special chance that may never be repeated,” the viewer is treated to stock footage of a black man who bears a passing resemblance to Dennis Rodman dunking a basketball.

Since 2013, Rodman, a former basketball star and contestant on “The Celebrity Apprentice,” has made several trips to North Korea to visit Kim, who is reportedly a fan of the NBA.

A short time later, as the narrator says, “A new world can begin today — one of friendship, respect, and goodwill,” the video features images of industrial development, running horses, and Trump smiling at Sylvester Stallone in the Oval Office last month. In 2012, North Korean state television showed Kim attending a concert in Pyongyang that featured a live performance of the theme tune from Stallone’s movie “Rocky.”

Video of the theme song from “Rocky” being performed in North Korea during a 2012 concert attended by Kim Jong-un.

“Be part of that world,” the narrator implores Kim, the film’s intended audience, moments after the Stallone-Trump meeting appears in the faux trailer.

Near the end of the video, as the narrator suggests that Kim can “enjoy prosperity like he has never seen,” a camera pans to the flag of Switzerland, the Western nation where the North Korean dictator was educated.

“I hope you liked it, I thought it was good,” Trump told a reporter who asked him about the video after the summit. “I thought it was interesting enough to show — one in English and one in Korean — and we had it made up. I showed it to him today, actually during the meeting, toward the end of the meeting, and I think he loved it.”

? US President Trump showed this video to North Korean Leader Kim Jong Un today during his meeting with him; Trump: “I think he loved it! I thought it was well done and that could very well be the future!” #TrumpKimSummit pic.twitter.com/1tnohjHLvb

Garrett Marquis, a spokesman for the National Security Council, told Bloomberg News later that “the video was created by the NSC to help the President demonstrate the benefits of complete denuclearization, and a vision of a peaceful and prosperous Korean Peninsula.” The NSC is run by John Bolton, Trump’s new national security adviser, who had previously advocated a preemptive military strike on North Korea. One passage in the video suggests that the only alternative to North Korea surrendering its weapons is war.

Perhaps not accidentally, the video also flatters Trump, showing images of him and Kim as the narrator describes how few world leaders “take actions that renew their homeland” and “are called upon to make a difference.” Trump is seen raising his hand near the end of the clip, as the narrator asks of Kim, “Will he shake the hand of peace?”

Just watched the movie trailer Trump made for Kim and now I'm pretty sure Trump is trying to convert him to Scientology.

During his post-summit news conference, Trump expanded on how he used the video to try to persuade Kim to disarm and open his country to investment from, for example, property developers.

Trump said he brought Kim to the table by showing him what the future could look like should he choose the path of peace: "Instead of [testing missiles] you could have the best hotels in the world right there. Think of it from a real estate perspective" https://t.co/f9SyXEyjUt pic.twitter.com/b9UeIaFy4z

“That was a version of what could happen, what could take place,” Trump said. “As an example, they have great beaches. You see that whenever they’re exploding their cannons into the ocean, right? I said, ‘Boy, look at that view. Wouldn’t that make a great condo behind … ?’ And I explained, I said, ‘You know, instead of doing that, you could have the best hotels in the world right there.’ Think of it from a real estate perspective.”

Trump says you could have the "best hotels in the world" on the beaches that North Korea uses for its artillery drills pic.twitter.com/4qo2UD17HG

Although the trailer for the film that does not exist was clearly intended to impress just one viewer, Kim, it left several professional critics cold. “While it’s true the format is ‘movie trailer,’ the aesthetic and voiceover is really more ‘reality-show-finale intro,'” James Poniewozik, a television critic for The New York Times observed on Twitter.

“It looks very much as if it was made on the novelty Movie Trailer program on the iMovie app, using outtakes from a 1998 ad for Enron,” the Guardian film critic Peter Bradshaw wrote.

Bradshaw also pointed to one potentially awkward moment in the video: a still image of a plump-looking Kim over the quote: “We no longer will have to tighten our belts.” That accidental reference to Kim’s weight might not have been the most diplomatic choice, given that Trump called the North Korean leader “short and fat” last year. As several observers noted, Kim also looked unamused when Trump joked on Tuesday that he hoped photographs of the summit lunch would make the two men “look nice and handsome and thin.” The awkwardness of that moment was quickly remixed into a comic meme referencing “Curb Your Enthusiasm.”

Updated: Tuesday, June 12, 3:07 p.m. EDT This post was revised to add the observation that the White House propaganda video reminded some viewers of a Scientology recruitment video and the reflections of two critics.