We should all pray that Tuesday is the beginning of long, drawn-out negotiations — whether extremely successful or empty and fruitless. 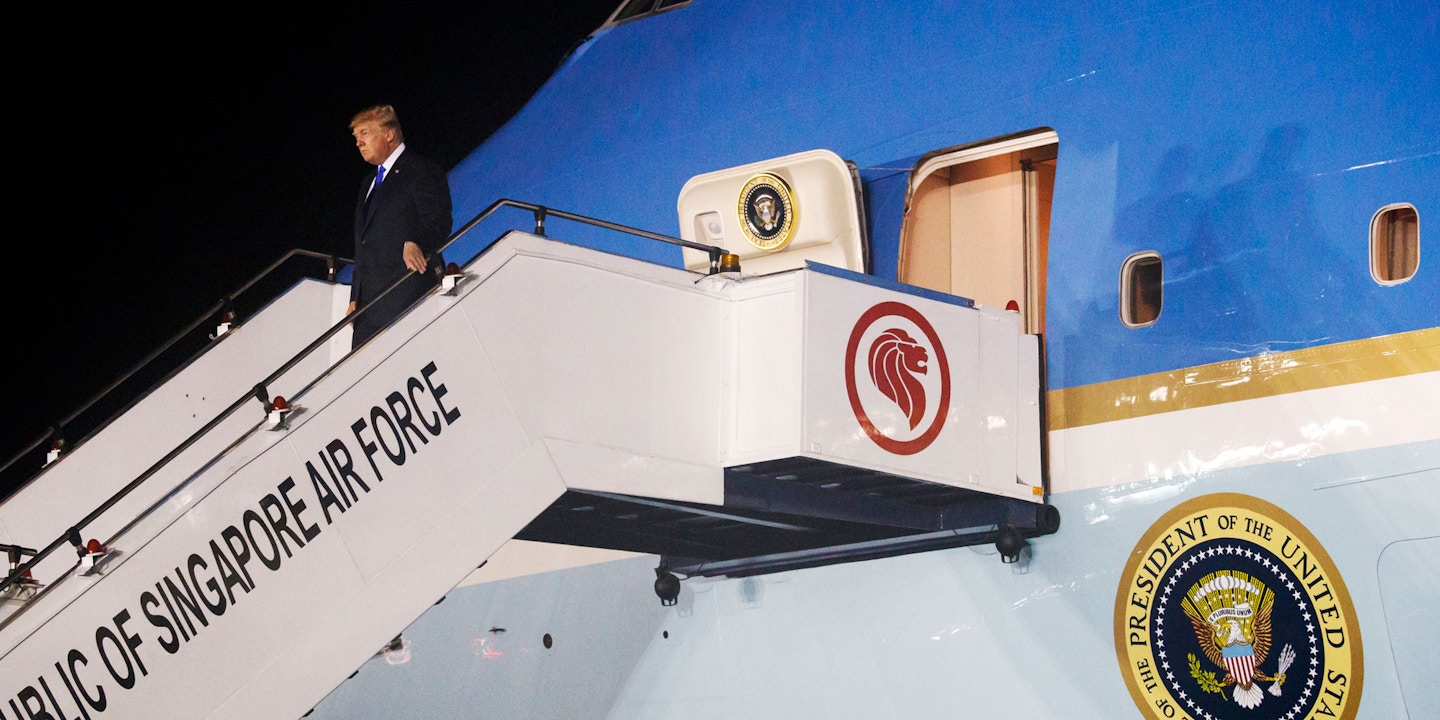 Last March at the Gridiron Club dinner in Washington, D.C., President Donald Trump joked, “I won’t rule out direct talks with Kim Jong-un — I just won’t. As far as the risk of dealing with a madman is concerned, that’s his problem, not mine.”

This may be the only genuinely funny thing Trump has ever said. And it was funny ’cause it’s true. Trump’s behavior toward North Korea in 2017 was berserk and terrifying. Equally so was his recent hiring of ultrahawk John Bolton — who believes it would be perfectly legal and admirable for the U.S. to attack North Korea right this second — as his national security adviser. Trump’s bombastic exchange of threats with North Korean dictator Kim Jong-un was a key reason why the Bulletin of the Atomic Scientists moved its “Doomsday Clock” to two minutes to midnight, the closest it’s ever been.

Yet the Washington, D.C., foreign policy “Blob” (as dubbed by Ben Rhodes, one of Barack Obama’s top aides) cannot perceive what’s right in front of its face – that the danger in this situation comes almost wholly from the United States in general and Trump in particular. Under these circumstances, Trump’s willingness to spurn the Blob and meet Kim in Singapore on Tuesday is an unmitigated good, and the only thing that matters about the outcome is whether it will place roadblocks between Trump and a catastrophic, potentially nuclear war. Anything beyond that is lagniappe.

The Blob, however, has spent the past several weeks fretting that the U.S. is gifting North Korea with an unearned photo op, or that Trump will be outmaneuvered and duped into an imperfect deal — in other words, concerns that are, at this moment in history, totally irrelevant. Top Senate Democrats have even attacked Trump from the right, demanding that any agreement that provides any sanctions relief to North Korea must require the country to surrender not just its nuclear weapons but all chemical and biological weapons as well.

Daniel Ellsberg, famed for leaking the Pentagon Papers, began his career studying U.S. nuclear strategy at the RAND corporation. He recently published “The Doomsday Machine: Confessions of a Nuclear War Planner,” which warns that the risk of humanity destroying itself with nuclear weapons is far higher than Americans understand. Ellsberg agrees “entirely, and wholeheartedly” that the Blob’s handwringing is ludicrous. “I personally can’t imagine” says Ellsberg, “an agreement that would be worse — which would not be incomparably better — than a war with North Korea.”

The U.S.-North Korea standoff has been called “the Cuban missile crisis in slow motion.” This is accurate, but for reasons that are never discussed in the United States.

The most important thing to understand about the Cuban missile crisis is why there was such a thing, but never an “Italian missile crisis” or a “Turkish missile crisis.” When the Soviet Union stationed nuclear missiles in Cuba in 1962, the U.S. found it intolerable because the missiles were just 2,000 kilometers and mere minutes away from Washington, D.C. But the Kennedy administration had already deployed medium-range nuclear missiles in Italy and Turkey, about the same distance from Moscow. The Soviets, however, did not immediately engage in nuclear brinkmanship. In other words, the “crisis” part of the Cuban missile crisis was that the U.S. was unwilling to live under the same threat to which we had subjected others.

Exactly the same is true with North Korea. The U.S. has possessed the capacity to destroy North Korea with nuclear weapons for all of North Korea’s existence. But this has never constituted a crisis, even though the U.S. engaged in one of the cruelest air campaigns in history during the Korean War from 1950-53, dropping more conventional bombs on North Korea than we used in the entire Pacific theater during World War II. The situation has only become a crisis now because Kim Jong-un’s regime may be able to do to us some of what we’ve always been able to do to them, and Trump has declared that this cannot stand.

This was the context when Trump threatened North Korea in August 2017 with “fire and fury like the world has never seen.” The next month at the United Nations, he insultingly referred to Kim as “Rocket Man” and proclaimed that the U.S. may “have no choice but to totally destroy North Korea.” One of Trump’s top Senate allies on foreign policy, Lindsey Graham of South Carolina, blithely declared that Trump had told him that “There is a military option to destroy … North Korea itself.”

It was tempting to believe that Trump was bluffing as part of some grand scheme, but there’s no evidence of that, especially since Trump is no more capable of conceiving and executing a grand scheme than a golden retriever is. On the contrary, reporting throughout 2017 and early 2018 depicted Trump as focused on plans for an attack on North Korea, with members of his inner circle trying to steer him away from any rash decision. Sen. Jim Risch, R-Idaho, who sits on the Senate Foreign Relations Committee, said Trump was prepared to conduct a “very, very brief” war with North Korea that would be “one of the worst catastrophic events in the history of our civilization” with “mass casualties, the likes of which the planet has never seen.”

In any case, even if Trump had been bluffing, his deranged rhetoric by itself made war far more likely. James Blight and Janet Lang are perhaps the premier academic experts on the Cuban missile crisis, and have studied the behavior of its participants based on interviews with officials on all sides. They believe foreign leaders facing Trump in a serious crisis will ask if they can“afford to bet that he is bluffing” and decide the answer is no: “The Cuban missile crisis strongly suggests that you will prepare for nuclear war, and that every preparation you make for that war raises the odds that the war will actually happen.”

The U.S. has never understood, says Blight, the lesson of Cuba’s behavior in 1962, which also applies to North Korea today. The U.S. did not comprehend that Cuba’s leader Fidel Castro was convinced that America was determined to invade and destroy Cuba, and urged Soviet Premier Nikita Khrushchev to immediately use nuclear weapons against the U.S. the moment that American troops landed on the beach — so that Cuba’s sacrifice would have some meaning. “Small, independent, recalcitrant countries dedicated to preserving their sovereignty and dignity, however they define it, have commitment, the willingness to martyr themselves if it comes to that, by taking down as many of the enemy as they can. … They aren’t irrational. They are just committed to their objectives, which we seem never to take seriously.” And whether or not Trump was bluffing, Blight contends, Kim almost certainly is not. “Small countries confronting big countries seldom bluff,” he explains. “They can’t afford to.”

Humanity made it out of the Cuban missile crisis by the skin of our teeth, but until recently, the U.S. appeared ready to roll the dice again, except with Trump as president rather than John F. Kennedy. Everyone on earth is indebted to South Korean President Moon Jae-in for the adroit diplomacy that broke that downward spiral; we’re also fortunate that Trump’s all-consuming lust for ratings is working for rather than against us, for once. There’s even a chance that the summit will lead to genuinely positive outcomes rather than just forestalling Armageddon.

But we should be overwhelmingly grateful if that’s all it does. We should all pray that Tuesday is the beginning of long, drawn-out negotiations — whether extremely successful or empty and fruitless — since as long as discussions continue in any form, it will be exceedingly difficult for Trump to mobilize the necessary support for war. Should we open 37 McDonald’s locations in Pyongyang? Invite Kim Jong-un to the Mar-a-Lago Christmas party? Ask him to host “Saturday Night Live”? Sure, why not. All that truly matters is that the world just holds on until the United States has another president.