Jurors Thought a Gay Man Would Enjoy Prison. They Sent Him to Death Row Instead. Will the Supreme Court Intervene?

Lawyers for Charles Rhines say his death sentence should be overturned based on anti-gay bias that violated his right to an impartial jury and due process. 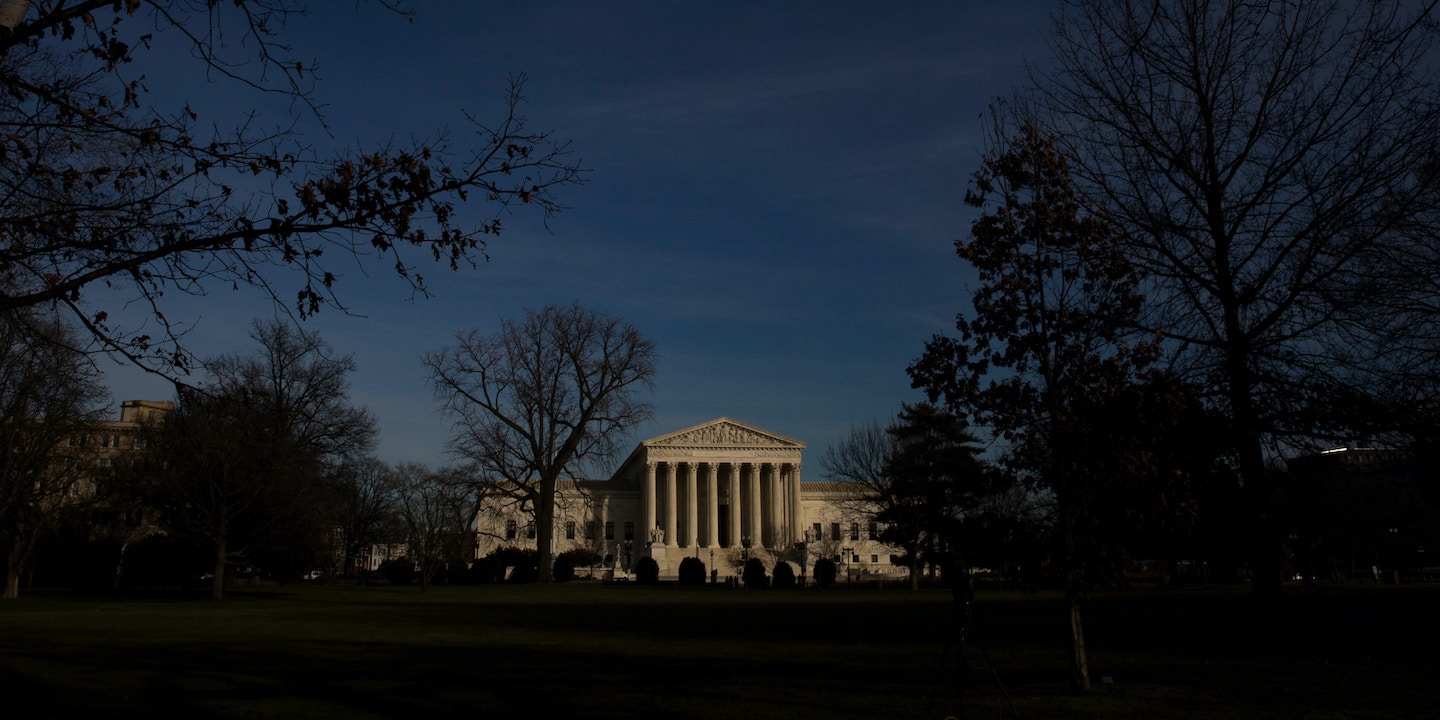 It was snowing heavily on the evening of March 8, 1992, when Charles Rhines used a key to let himself into the closed Dig ’Em Donuts shop on West Main Street in Rapid City, South Dakota. He’d been fired from the shop a few weeks earlier, but he’d kept a key. Using a flashlight, he made his way to the store’s office to steal whatever money he could find. But he was interrupted when a courier he knew from the shop, Donnivan Schaeffer, entered the office. Rhines pulled a black-handled buck knife from his bag and attacked Schaeffer, stabbing him three times.

Rhines was convicted of murdering Schaeffer the following year and sentenced to death. But lawyers appointed to handle his case say that the sentence was tainted and should be overturned. Specifically, they argue that Rhines, who is gay, was discriminated against when anti-gay bias infected the jury room, violating Rhines’s right to an impartial jury and due process. Lawyers for the state say that’s nonsense and the heinousness of the crime was what sent Rhines to death row. So far, the courts have sided with South Dakota. Rhines’s lawyers have asked the U.S. Supreme Court to intervene; on June 14, the justices are slated to decide whether to do so. There were signs early on that the jurors deciding whether Rhines should be sentenced to life in prison or to death might have been considering more than the facts of the case before them. During deliberations, the panel sent a note out to the judge. They had a list of pointed questions about what life in prison would mean. Would Rhines have a cellmate? Would he be allowed to “create a group of followers or admirers”? Would he be allowed to “have conjugal visits”? They apologized if any of the questions were “inappropriate,” but indicated that they were important to their decision-making. The judge declined to answer, telling the jurors that all they needed to know was in the jury instructions they’d received. Eight hours later, they sentenced Rhines to death.

In the intervening years, Rhines appealed his conviction on various claims — including that his lawyers had provided ineffective assistance of counsel — but it wasn’t until late 2016 that the newly appointed federal capital defenders found the jury note and realized its significance. “That jury note jumped out at us,” said Shawn Nolan, head of the capital habeas unit of the Federal Community Defender Office in Philadelphia (often appointed to handle capital litigation in states like South Dakota, where there is no local capital habeas unit). “It was pretty glaring that there was some anti-gay bias going on in the jury room.”

The lawyers went out to interview the jurors. What they learned, Nolan said, was “kind of horrifying.” One said the jurors knew that Rhines was gay “and thought that he shouldn’t be able to spend his life with men in prison.” A second recalled another juror making a comment that sentencing Rhines to life in prison would be “sending him where he wants to go.” A third said “there was lots of discussion of homosexuality” in the jury room. “There was a lot of disgust. This is a farming community,” the juror said. “There were a lot of folks who were like, ‘Ew, I can’t believe that.’”

“What They Do, Not Who They Are”

Ordinarily, the law does not allow for a conviction or sentence to be overturned based on what took place in the jury room. It’s known as the no-impeachment rule, designed to protect the basic integrity of the jury system. But in this case, Nolan argues, the juror misconduct violated constitutional protections — so the rule shouldn’t apply.

In a 2017 case known as Peña-Rodriguez v. Colorado, the U.S. Supreme Court said something similar. In that case, after Miguel Angel Peña-Rodriguez was convicted of unlawful sexual conduct and harassment, two jurors came forward to tell his lawyer that another juror had made racially charged statements about Peña-Rodriguez and an alibi witness, commenting about the likelihood that Peña-Rodriguez was guilty and the witness was not credible because both were Hispanic. Peña-Rodriguez sought a new trial based on the jury misconduct, but the courts said no because of the no-impeachment rule. The U.S. Supreme Court disagreed. “A constitutional rule that racial bias in the justice system must be addressed — including, in some instances, after the verdict has been entered — is necessary to prevent a systemic loss of confidence in jury verdicts, a confidence that is a central premise of the Sixth Amendment trial right,” the court wrote. As such, the court concluded that “where a juror makes a clear statement that indicates he or she relied on racial stereotypes or animus to convict a criminal defendant, the Sixth Amendment requires that the no-impeachment rule give way” so that the court can consider whether the misconduct tainted the promise of a fair trial.

It was on the basis of this ruling — along with a 2017 opinion in which the Supreme Court held that the law is meant to punish “people for what they do, not who they are” — that Nolan and his team last year sought again to challenge Rhines’s sentence. “To allow a juror to vote for a man’s death sentence on the basis of anti-gay animus and stereotypes unquestionably violates the Sixth and Fourteenth Amendments,” Rhines’s lawyers wrote in their pleading to the Supreme Court. “The logic of Peña-Rodriguez cannot apply to racial bias in jury factfinding without applying to capital jury sentencing and comparably dangerous prejudice.”

The state of South Dakota disagrees, arguing that the alleged anti-gay bias is not at all like the racial bias demonstrated in the Peña-Rodriguez case. The Supreme Court’s ruling was “narrowly tailored” only for cases where a conviction was based on race and “did not create an exception for alleged homosexual bias,” Assistant Attorney General Paul Swedlund wrote in a court filing. Part of the Supreme Court’s logic in Peña-Rodriguez was that racism had played a distinct role in “thwarting aspirations of equality” in the system. The same could not be said for anti-gay bias, Swedlund argued. Our history is “not replete with ‘stark and unapologetic’ anti-homosexual jury verdicts. No wars have been fought over it. No nationwide programs have been perpetrated for the enslavement or eradication of homosexuals,” he wrote. “No politician has ever proposed constructing a wall to keep homosexuals out of the country. The acceptance of equality in regard to non-racial distinctions has occurred largely peaceably and with comparatively greatly less controversy.”

Where Deprivation of Life Is at Stake

Chase Strangio, a staff attorney with the LGBT Project of the American Civil Liberties Union, agrees that there is “nothing akin to anti-black racism in the United States in the criminal legal system.” And he notes that the law treats race differently than it does sexual orientation in the context of equal protection, reviewing claims that invoke racism with the highest level of scrutiny. “That said, I think that the Sixth Amendment right that Peña-Rodriguez discusses should apply in general and that any bias is a significant problem. Just because there is a very distinct and deeply insidious anti-black and racist bias in the criminal legal system doesn’t mean there’s not a whole bunch of other biases that are also problematic and have infected and infused the operation of the system as a whole,” he said. “And anti-LGBT bias is one of those. Absolutely.”

Indeed, the law has long discriminated against the LGBT community — gay sex was criminalized until 2003; LGBT people have been discriminated against in accommodations and in military service. It wasn’t until 2015 that gay marriage was finally legalized. Anti-gay bias infiltrates every aspect of the criminal justice system. According to the results of a landmark survey led by Lambda Legal, 19 percent of nearly 1,000 individuals interviewed about their interactions with the court system between 2007 and 2012 reported that a judge, attorney, or other court employee made negative comments about a person’s sexual orientation, gender identity, or gender expression. Sixteen percent said their own sexual orientation or gender identity was raised when it was not relevant. Twelve percent of respondents who had served on a jury reported hearing “discriminatory language about sexual orientation or gender identity.”

Strangio notes that Rhines’s case wasn’t even about sex, so there is no reason the issue should have come up at all. “It’s hard to imagine how there’s not bias just by evidence of the fact that this was being considered,” he said. “If this was a heterosexual defendant in a robbery-murder, would there be any mention of this? No.”

“The law certainly has room to recognize that anti-LGBT bias in the criminal legal system taints the constitutional guarantees that criminal defendants should absolutely be entitled to, particularly capital defendants who are literally facing the deprivation of their lives,” Strangio said. “I hope it is troubling to the Supreme Court that someone would be executed under these circumstances.”