Donald Trump has not just moved the Overton window — he has smashed it to pieces. 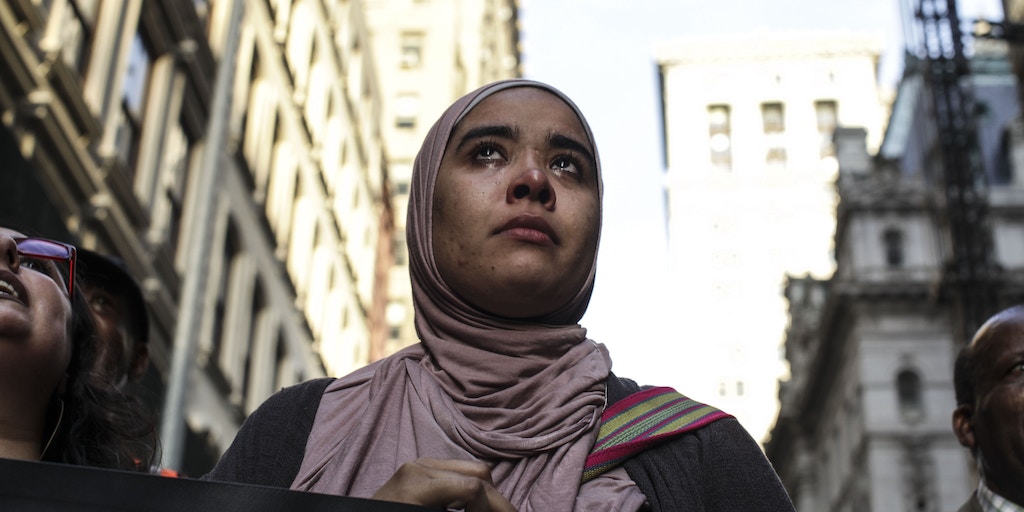 Protesters hold a rally outside of Manhattan Federal Court on June 26, 2018 in New York City. They came out to protest the Supreme Court’s decision to uphold President Trump’s travel ban.

Welcome to the White Supremacy Court. On Monday, the court’s conservative majority produced a 5-4 ruling in favor of racially gerrymandered congressional maps in Texas. On Tuesday, in another 5-4 verdict, the right-wing quintet took an even bigger step toward institutionalizing discrimination and bigotry by ruling in favor President Donald Trump’s “Muslim ban.”

Writing for the majority, Chief Justice John Roberts said that Trump’s executive order had “a legitimate grounding in national security concerns,” rather than religious discrimination. Yet in December 2015, at a rally in South Carolina, Trump called for a “total and complete shutdown of Muslims entering the United States until our country’s representatives can figure out what is going on.”

In March 2016, in an interview with CNN, Trump claimed, “Islam hates us” and suggested the United States was “having problems with Muslims coming into the country.” In January 2017, in an appearance on Fox News, his campaign adviser Rudy Giuliani admitted that when Trump “first announced it, he said, ‘Muslim ban.’ He called me up. He said, ‘Put a commission together. Show me the right way to do it legally.’” In November 2017, Trump retweeted three anti-Muslim propaganda videos from the far-right group, Britain First.

What makes Tuesday’s decision so bizarre and disingenuous is that Roberts noted and quoted Trump’s bigoted remarks in his 39-page opinion.

To be clear, the conservatives on the court were not unaware of any of these remarks and retweets. In fact, the Hawaii v. Trump ruling, which approved the “Muslim ban,” might have made more sense if they had been. What makes Tuesday’s decision so bizarre and disingenuous is that Roberts noted and quoted each and every one of them in his 39-page opinion. Yet the chief justice and the rest of his reactionary crew were still able to conclude that the president’s executive order was “expressly premised on legitimate purposes” and said “nothing about religion.”

This is white supremacy in action. This is what happens when anti-Muslim, anti-minority animus becomes widespread. Normalization leads to legalization.

Listen to Mehdi Hasan discuss the Muslim ban with Rep. Keith Ellison and Debbi Almontaser on his Deconstructed podcast:

It was left to Justice Sonia Sotomayor, the daughter of Puerto Rican immigrants and one of only three female justices on the bench, to issue a scathing dissent — and a reality check.

Referencing the Masterpiece Cakeshop decision earlier this month, in which the Supreme Court ruled 7-2 in favor of a Christian baker who had been the target of “religious hostility” by state officials in Colorado for refusing to bake a cake for a gay couple, Sotomayor took aim at the hypocrisy of Roberts and company. “Unlike in Masterpiece, where the majority considered the state commissioners’ statements about religion to be persuasive evidence of unconstitutional government action,” she wrote, “the majority here completely sets aside the President’s charged statements about Muslims as irrelevant.” That, she continued, “tells members of minority religions in our country ‘that they are outsiders, not full members of the political community,’” citing a line from a previous Supreme Court case.

Sotomayor tried to shame the justices into recognizing their brazen double standard on the issue of religious bigotry and discrimination, but it is difficult to shame the shameless. Perhaps echoing Groucho Marx — “Who you gonna believe, me or your own eyes?” — Roberts was bent on excusing Trump from the charge of Islamophobia. That five of the seven countries on the banned list are majority Muslim, wrote the chief justice, “does not support an inference of religious hostility”; nor does the president’s long history of anti-Muslim rhetoric. Seeing and hearing, it seems, is not believing.

Yet, as Sotomayor noted, “Based on the evidence in the record, a reasonable observer would conclude that the [Trump executive order] was motivated by anti-Muslim animus. The majority holds otherwise by ignoring the facts, misconstruing our legal precedent, and turning a blind eye to the pain and suffering the [order] inflicts upon countless families and individuals, many of whom are United States citizens.”

She added that “despite several opportunities to do so, President Trump has never disavowed any of his prior statements about Islam,” preferring to continue with his “unrelenting attack on the Muslim religion and its followers.”

This, however, is now the White Supremacy Court. The majority — five card-carrying conservatives, four of whom are white, and all of whom are dismissive of racial and religious equality — can blithely publish a lengthy legal opinion that documents the president’s “anti-Muslim animus” while simultaneously denying any “inference of religious hostility.”

Remember: When candidate Trump first announced his “Muslim ban” in December 2015, right-wing Republicans — including those who would later go on to serve in his administration — lined up to attack the proposal. Now-Vice President Mike Pence had called it “offensive and unconstitutional.” Erstwhile White House chief of staff Reince Priebus had accused Trump of undermining “American values.” And House Speaker Paul Ryan had said it was “not conservatism” and “not who we are as a party.”

Trump has not just moved the Overton window — he has smashed it to pieces.

How far we have regressed over the past two and a half years. Trump has not just moved the Overton window — he has smashed it to pieces. Today, the highest court in the United States has given its seal of approval to his bigoted ban. As Rep. Keith Ellison, D-Minn., the first Muslim-American elected to Congress and the deputy chair of the Democratic National Committee, told me on the latest episode of the Deconstructed podcast that Hawaii v. Trump is “a rubber-stamping by the Supreme Court of a discriminatory policy by the Trump administration.”

Islamophobia is no longer a fringe position; it is the law of the land. A White Supremacy Presidency has been blessed by a White Supremacy Court, which has given a pass to anti-Muslim bigotry on the spurious grounds of “national security.” Fear of “the Other” now justifies banning “the Other.”

This is not a drill. This is a real national emergency: The U.S. Constitution, liberal values, and democracy itself are all under near-daily assault from a coalition of conservative politicians and judges. To quote my friend Dalia Mogahed, a former adviser on religion to President Barack Obama, Muslims “are like canaries in the coal mine. We might be the first to feel it, but the toxic air of fear is harming us all.”