The human costs of the Trump administration’s policies fell by the wayside. The U.S. Supreme Court heard oral arguments Wednesday in Trump v. Hawaii, a suit challenging the legality of President Donald Trump’s travel ban against individuals from Iran, Libya, North Korea, Somalia, Syria, Venezuela, and Yemen. In effect since December 2017, the presidential proclamation, which blocks citizens of the seven countries from entering the United States on multiple grounds. The court is considering challenges to the ban on both constitutional grounds, and questions of the statutory authority of the president to issue such a policy.

The first ban, announced on January 27, 2017, targeted only a handful of Muslim-majority countries, earning it the moniker of a “Muslim ban” and engendering massive popular protests. Critics have said the ban was the fulfillment of Trump’s campaign promise for a “total and complete shutdown of Muslims entering the U.S.” The initial executive order was rescinded in March 2017 amid legal challenges, but was quickly replaced with a similar order, which was partially blocked — only to be replaced by the current ban, issued in September 2017.

“There’s been a lot of attention paid to the ban, but it’s just a small piece of a much larger campaign under Trump to demonize and stigmatize the Muslim community.”

The arguments proffered at the Supreme Court on Wednesday would be familiar to those who have followed the winding path of litigation around the ban, but what was not said may be the most telling parts of the exchange: The human impact of the ban was skirted by the Department of Justice and the court justices alike, and both sides, through omission owing to the case’s limitation, seemed to grant a green light the Trump administration’s larger array of discriminatory and anti-Muslim policies justified by rhetoric of national security.

“There’s been a lot of attention paid to the ban, but it’s just a small piece of a much larger campaign under Trump to demonize and stigmatize the Muslim community,” said Johnathan Smith, the legal director of Muslim Advocates, who was present at the Supreme Court, pointing to policies like “extreme vetting” for refugees trying to enter the U.S.

The hearing in Washington turned on issues of freedom of religion and executive power. The federal government argued that Trump’s anti-Muslim statements, made as a private citizen, could not be used to evaluate his actions as president. The ban’s opponents contended that there is a clear continuity between Trump as a candidate and Trump as president and argued that this anti-Muslim animus renders the ban a violation of the anti-establishment clause of the First Amendment — a line of argumentation explored in the more liberal justices’ questions.

The Department of Justice, along with more conservative justices, spent much of the session harping on issues of national security and the significant deference traditionally given to the executive branch in such matters. But the discussion demonstrated a concerning lack of critique for the premise that an ever-expanding security apparatus is an acceptable, and desirable, goal. Such expansion is rapidly proceeding under Trump, in some cases even bolstered by the frenzy surrounding the travel ban — and it may represent a more encompassing, and intransigent, anti-Muslim policy than the ban itself.

In his argument, Solicitor General Noel Francisco, who defended the Trump administration, insisted that the ban does not target Muslims, but rather uses a set of “neutral criteria all across the world” to determine which countries to exclude. The thrust of these criteria, he reiterated throughout, is the requirement that countries cooperate with the U.S.’s vetting process by complying with “information-sharing and identity-management protocols” set forth by the departments of Homeland Security, State, and Justice to address “terrorism-related and public safety risks.”

The justices seemed to accept the premise that such measures would be acceptable if justified by security, rather than anti-Muslim animus, though a few questions addressed the degree of neutrality in the application of Trump’s security criteria. Justice Sonia Sotomayor pressed Francisco early on, asking, whether he could confirm “that no other country that fails all three of the criteria was excluded from this list”; he avoided a direct answer. Yet the court repeatedly deferred to the president’s wide-ranging authority on issues of vetting, and explicitly demurred on the prospect of “second-guessing” the executive branch on issues of national security. Even Neal Katyal, the litigator arguing against the ban, used the currency of vetting to support his case. Katyal endorsed vetting as a counterweight to the president’s order, touting the advantage of a “fine-grained vetting system” over blanket bans. 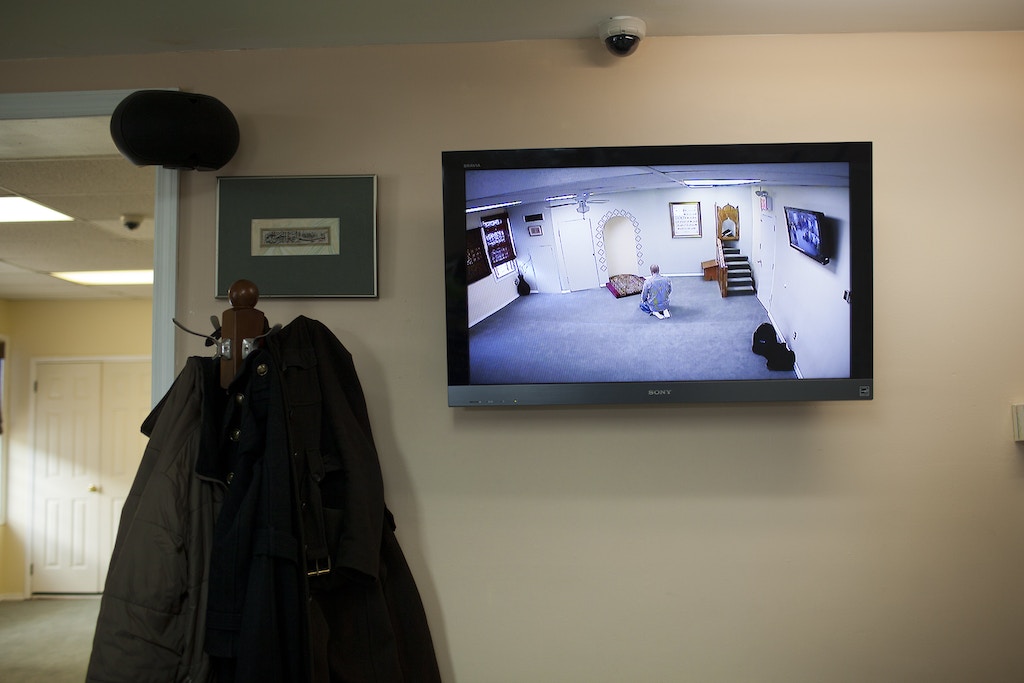 A CCTV monitor displays a man praying on February 25, 2012, at the Iqra Masjid mosque in Brooklyn, New York.

The reluctance to oppose any policies related to security may provide a further license to the Trump administration as it works to institutionalize the “extreme vetting” promised by Trump on the campaign trail. Since taking office, he’s worked to make good on his vow, and explicitly tied these measures to the Muslim ban. Under Trump’s direction, the DHS has explored experimental surveillance software and social media screening that experts warn would amount to automated profiling of Muslims and other minorities. At the same time, embassies abroad have received orders to intensify their screening process to identify “populations warranting increased scrutiny.” According to a recent report from Muslim Advocates, an increasing number of individual Muslims and citizens from numerous Muslim-majority countries not included in the ban are facing what appear to be arbitrary visa denials. Muslim refugee admissions dropped 94 percent from January 2017 to November 2017, from 50 percent of all refugees entering the U.S. to less than 10 percent.

For Smith, the Muslim Advocates official, who also served in the civil rights office of the Obama Justice Department, Trump’s aggressive “vetting enhancement” programs are “at least as worrisome as the ban,” but have received far less attention. “You can’t divorce these issues from each other,” he said. “And for those of us who believe that the travel ban was driven by anti-Muslim bigotry, we should be very concerned that these ‘extreme vetting’ measures will also reflect this position.”

“Whatever the outcome of the Supreme Court ruling, we can’t take our foot off the gas in fighting this larger system of discrimination.”

In February, Trump established a National Vetting Center under the auspices of DHS, with the aim to “improve the Government’s ability to identify terrorists, criminals, and other nefarious actors” both inside and outside the U.S. This vast mandate has raised alarm about potential surveillance, privacy violation, and profiling, but the details of the center’s work remain unknown, said Smith. Muslim Advocates filed Freedom of Information Act requests for this information, but the request is still pending. “It’s deeply disturbing because, while we don’t know the details, we’ve seen an undeniable trend of discrimination against minorities and Muslims under this administration,” said Smith, “and it’s becoming entrenched not just on the federal level, but state and local too. Whatever the outcome of the Supreme Court ruling, we can’t take our foot off the gas in fighting this larger system of discrimination.”

Bushra al-Fusail, a Yemeni asylee currently living in the Bronx, New York, also noted something glaringly absent from Wednesday’s hearing: The consideration that many of those blocked by the ban are trapped in countries where “national security” is virtually nonexistent. “My mother is living under rocket fire,” she told The Intercept, describing her parents’ home in the Yemeni capital, Sanaa. Al-Fusail fled to the U.S. in 2016 and said her parents were making plans to join her when Trump issued his first ban in January 2017. “I thought it must be a joke,” she said. “I couldn’t believe after all we’d suffered from the war, this door would be slammed in our face.”

Al-Fusail’s father has since passed away in Yemen, but she said she was unable to leave the U.S., due to the ban, to attend the funeral. “American politics — I don’t understand it,” she exclaimed. “They can fight wars overseas, but they can’t let the victims of those wars come to safety?” Al-Fusail has spent months exhausting the appeals process on behalf of her now-widowed mother. If the Supreme Court brings any relief by striking down the ban, it would likely not come until near the end of the court’s session, in June. After Wednesday’s hearing, most legal prognosticators have predicted that the outcome will rule in favor of the president. In the meantime, the ban remains fully in effect.

For her part, al-Fusail is beginning to despair. “I’m not hopeful, but what choice do we have?” she said. “Yemen is full of death for us. I will never stop trying to bring my mother to safety.”