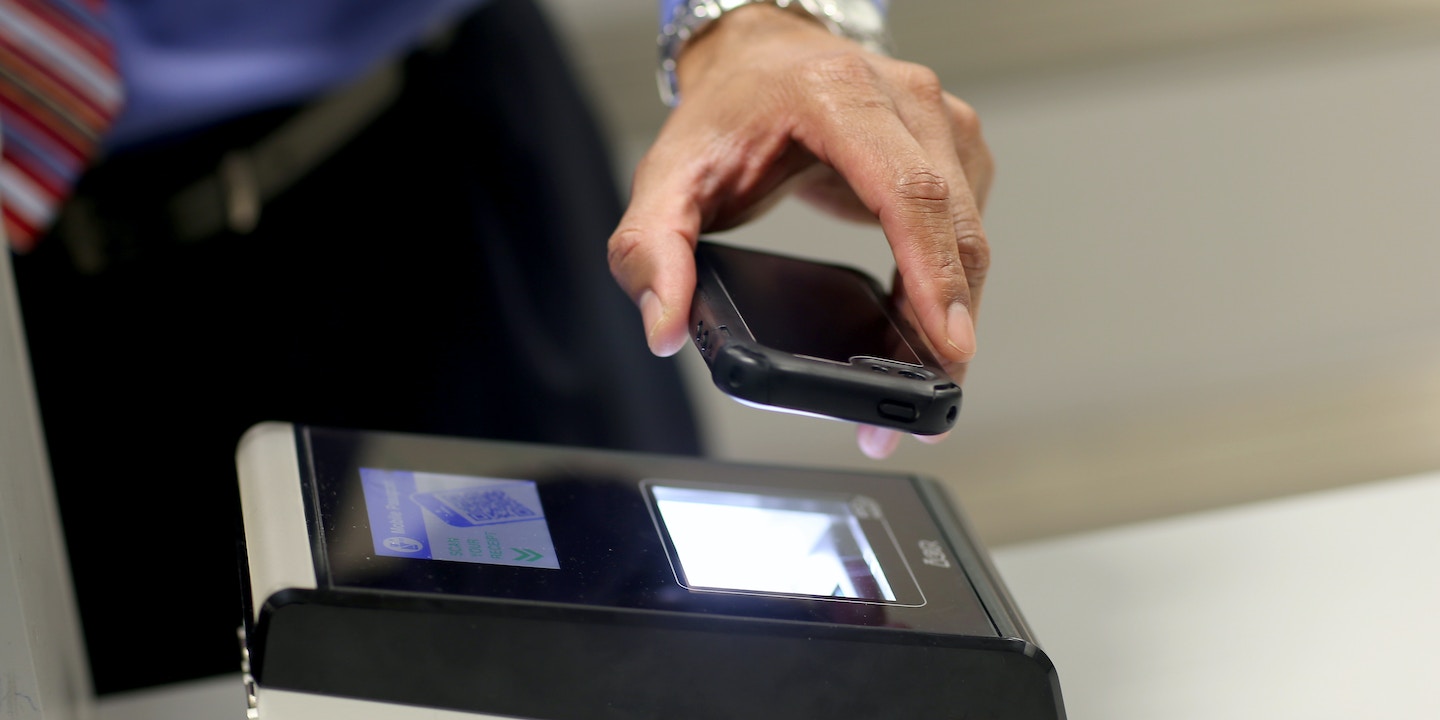 Back when he was a presidential candidate, in August 2016, Donald Trump promised his followers and the world that he would screen would-be immigrants using “extreme vetting,” a policy that has remained as ambiguous as it is threatening (his haphazard and arbitrary “Muslim ban” was the apparent result of that pledge). Today, Homeland Security documents show the American private sector is eager to help build an advanced computer system to make Trump’s “extreme vetting” a reality.

On July 18 and 19, the U.S. Immigration and Customs Enforcement’s Homeland Security Investigations division hosted an “industry day” for technology companies interested in building a new tool for the Homeland Security apparatus. The event was only supposed to take one day at the Crystal City Marriott in Arlington, Virginia, but was expanded to two after what ICE called an “overwhelming response” from interested companies. According to an ICE document titled “Extreme Vetting Initiative” provided to potential contractors, the agency’s current ability to evaluate an immigrant’s potential for criminality or terrorism is inadequate, “fragmented across mission areas and are both time-consuming and manually labor-intensive due to complexities in the current U.S immigration system.” ICE is simply digging around so much, at such a fever pitch under Trump, that they’ve created a hopeless backlog.

So it’s time for something new and better, says ICE: a system that will serve as an “overarching vetting” machine “that automates, centralizes, and streamlines the current manual vetting process while simultaneously making determinations via automation if the data retrieved is actionable” in order to “implement the President’s various Executive Orders (EOs) that address American immigration and border protection security and interests.” In other words, data-mining software that helps ICE agents find human targets faster. A slide from an ICE presentation made at the agency’s “Industry Day” in July.

ICE’s hope is that this privately developed software will help go far beyond matters of legality to matters of the heart. The system must “determine and evaluate an applicant’s probability of becoming a positively contributing member of society, as well as their ability to contribute to national interests” and predict “whether an applicant intends to commit criminal or terrorist acts after entering the United States.” Using software to this end is certainly in line with Trump’s campaign rhetoric — during a rally in Phoenix, he described how “extreme vetting” would make sure the U.S. only accepts “the right people,” using “ideological certification to make sure that those we are admitting to our country share our values and love our people.”

Sign-in sheets from the ICE event show a sizable private sector turnout, including representatives from IBM, Booz Allen Hamilton, LexisNexis, SAS, and Deloitte, along with a litany of smaller firms, such as Praescient Analytics, Red Hat, PlanetRisk, and Babel Street (the sign-in sheets can be read below).

The tool, according to ICE documents, will solve the fact that the agency is dealing with such an enormous volume of people that analyzing them through traditional means is becoming less feasible — Homeland Security’s Counterterrorism and Criminal Exploitation Unit (CTCEU) “reviews over 1,000,000 violator leads for derogatory information annually and sends approximately 8,400 cases to HSI field offices for investigation.”

Should ICE succeed, the Extreme Vetting Initiative will make analyzing millions of people for potentially threatening traits more manageable. The initiative appears to be chiefly aimed at what ICE calls “nonimmigrants,” a term for foreign nationals seeking “temporary entry to the United States for a specific purpose.” Interested contractors were told their system must be capable of scraping not only “data in various law enforcement databases” and “other government agency computer systems” (including FALCON, an immigration database created by Palantir) but will extensively exploit anything that can be found on the public internet in order to provide “continuous vetting” of foreign visitors for the entirety of their stay. Essentially, anything online that doesn’t require a password would be fair game under the Extreme Vetting Initiative:

ICE declined to comment for this article, but in a Q&A session with contractors, the agency lamented that its “biggest constraint, because we are a vetting/screening operation, is that we are required to work with what is publically [sic] available.” That said, ICE told the contractors that as far as what data is ingested into the Extreme Vetting Initiative system, they’re willing to be very flexible:

We are open to anything right now. We’d have to run it thru Privacy but the idea is to be nimble here. We don’t want to be restrictive so we don’t want to strictly limit it to certain datasets. We recognize things are changing all the time as is our ability to navigate thru new permissions to enhance law enforcement’s ability to do their job. We expect that to continue in the near term to get the job done.

That same Q&A document includes a pointed question from an unnamed contractor about the potential for the entire plan to be foiled by the American Civil Liberties Union:

But ICE doesn’t seem particularly worried, explaining that while the FBI has been tripped up when attempting similar data-mining operations against American citizens, an operation focused on non-citizens would be less likely to face such obstacles. “The prediction is that in the near future there will be legislation addressing what you can and can’t do,” the agency answered. “We will continue to do it until someone says that we can’t.”