Protesters move on the courthouse, the government uses verbal sleight of hand, and a father is prosecuted despite Trump’s order banning family separation. 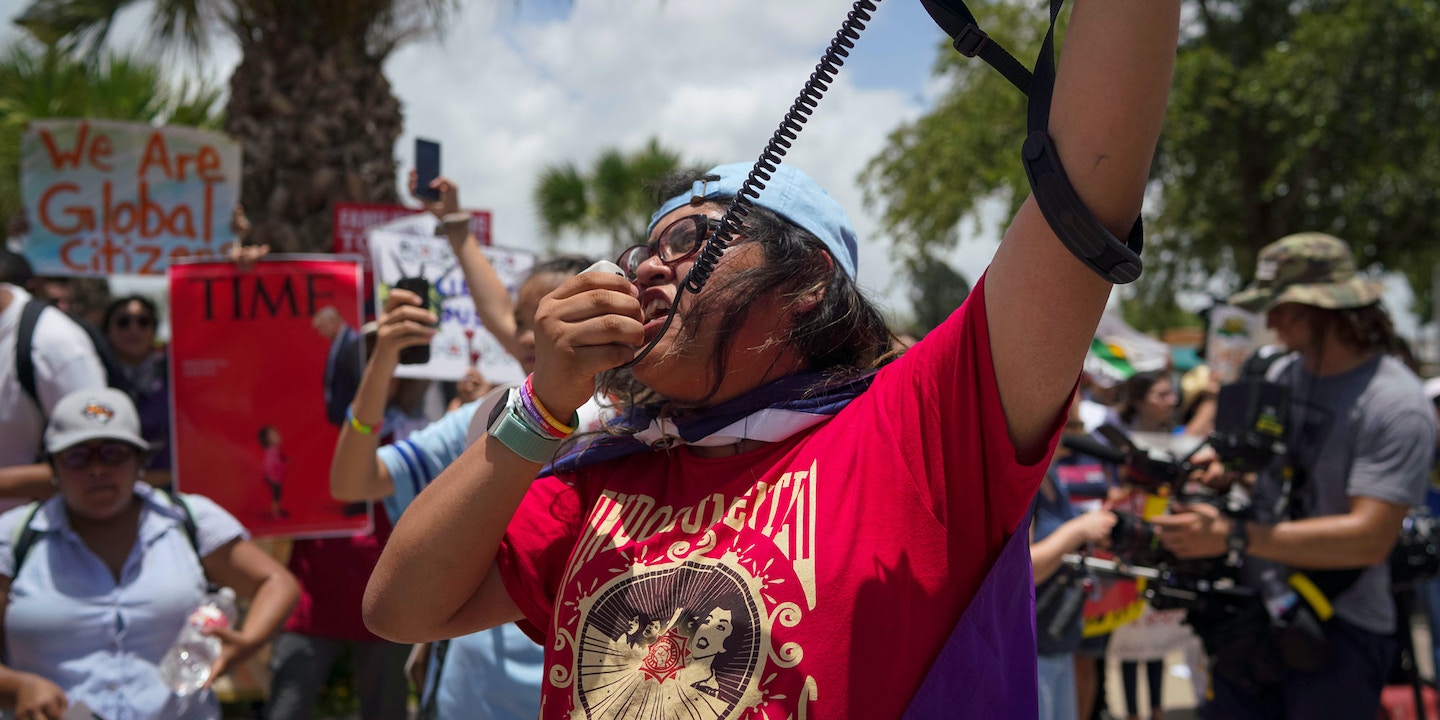 A “Families Belong Together” demonstration on Thursday in the Rio Grande Valley of Texas — ground zero for President Donald Trump’s “zero tolerance” policy — climaxed with protesters noisily advancing on a federal court building. Migrant parents have been criminally prosecuted there since early May, when the government started taking their children after the refugee families were apprehended crossing the southern border.

The demonstration had been organized by the American Civil Liberties Union of Texas and several other groups. To get to Brownsville, a small city with palm trees in deep South Texas, people signed up to ride for hours on chartered buses from the state’s big cities. As late as the day before the rally, the ACLU was expecting 2,000 people to attend.

The protest began at 11 a.m. in a city park next to the courthouse, with speeches, music, and a comedian. A picnic atmosphere prevailed until about 1:30 p.m., when organizers played the now-infamous tape of detained children sobbing in Border Patrol detention. Then the demonstrators were asked to move on the federal courthouse, just yards away.

The mood quickly turned steely, with ever intensifying cries of “Sí se puede!” and “Shut it down!” A buzzing hive of demonstrators formed lines, and several got flush against the courthouse front door, next to burly men in Department of Homeland Security uniforms. Things felt tense.

But no protesters were arrested. Instead, a handful were allowed in, including five women from church-based groups, most of them wearing clerical garb. One pressed her palms together in prayer as she completed her metal detector inspection.

But once inside the courthouse, the religious women had nowhere to go, because by then the only remaining proceedings were for felonies such as homicides and attempted distribution of meth. The protest’s organizers seemed not to have checked the online court docket, which made clear that the courthouse’s quantum of “zero tolerance” mass trials that day were scheduled for the morning, not the afternoon. They’d ended before the protest even started.

The oversight was ironic, because if the protesters had witnessed the morning session, they might well have rioted. “Families Belong Together” attendees make their way to the federal courthouse on June 28, 2018.

As of June 20, when the executive order banning family separation was issued, more than 2,000 children had been taken from their parents. Subsequent to the order, adult members of families caught crossing the border are supposed to be spared from criminal prosecution so that they can remain with their kids. The change was reflected Thursday in defendant demographics. In Brownsville, 18 defendants stood in front of the judge, downcast and clanking in waist chains and handcuffs. They were mainly Mexicans; only four were from Central America. Seventeen had crossed the border alone.

But the 18th defendant was a diminutive and very tired looking man from El Salvador named Aquino. When the judge asked the group if anyone had a child taken, Aquino piped up in Spanish, “Me!”

“I thought they weren’t supposed to be separating them,” the judge interjected. “Do you know where the child is?” he asked the assistant U.S. attorney, a young woman.

“I’ll have an answer momentarily,” she said. And she did, after another government attorney trotted over a few minutes later with a folder. “He’s at Southwest Key Casa Padre,” the prosecutor said. That is the Brownsville children’s shelter, based in an old Walmart, that refused to let Oregon Sen. Jeff Merkley in for a visit.

Aquino had been separated from his child 11 days earlier — a couple of days before the executive order. This was the first he’d heard of the boy’s whereabouts. “Deseo ver a mi hijo,” he said, his voice choking. “I want to see my son.”

“You are going to be turned over to the immigration authorities,” the judge said. “How that gets sorted out is their call.”

By the end of the mass proceeding, all 18 defendants, including Aquino, had been convicted of “illegal entry” and sentenced to “time served” before being transferred to immigration detention centers. After the sentencing, I ran into one of Brownsville’s local federal public defenders. He remembered Aquino’s case, and I asked why the government had not withdrawn the criminal charge against him after the executive order was issued. After all, that is what the U.S. attorney’s office in El Paso, Texas, is doing with parents; it has also been done in McAllen, which, like Brownsville, belongs to the federal court’s Southern District.

The assistant federal public defender said he did not know why Brownsville was doing things differently. I went to the U.S. attorney’s office in the courthouse and asked to speak with the woman who prosecuted Aquino. The person at the front desk said the prosecutor does not speak with the press.

Later, I spoke with Brownsville private attorney Rochelle Garza. She is representing a client pro bono, someone whom she learned about by sitting in on a mass trial in the Brownsville federal courthouse. He lost his 12-year-old daughter during the first week of June. On June 11, Garza started calling an Office of Refugee Resettlement family reunification hotline and sending emails as the hotline directed her to do. She never heard back, even though, since the middle of last week, an injunction valid for the entire country is mandating that children and parents be reunited in 14 to 30 days.

The Texas Civil Rights Project, based in Alamo, Texas, is representing 381 parents who were separated from their children. On Friday, the TCRP said it had only been able to reunite four families.

The government recently told the media that over 500 children had been “reunited” with their parents. But they’re using verbal sleight of hand. Many if not most of those kids were behind cyclone fences in facilities where their parents were also being held — fenced apart but often visible to each other. With families still imprisoned by the same agency, Customs and Border Protection, when the executive order came down, it was a snap to put families back together. The problem is the vast number of children who were moved out of the fenced enclosures and sent far away, to the Office of Refugee Resettlement, while their parents were sent to Immigration and Customs Enforcement detention centers. ICE and ORR are two entirely separate government agencies with little coordination between them.

On Thursday night, I got a collect call from an immigration detention center. The caller was a Honduran woman who, court records show, was detained in the second week of June and separated the next day from her 6-year-old son. Now in a Texas immigration detention center, she was not told until a few days ago where her child is: California. She has since spoken with him twice — or, that is, tried to speak, because he only cries. He is in a shelter, and the staff has told her that he is not eating, has lost weight, and is ill. The woman has no lawyer. She has seen news about the family reunification injunction on the detention center TV. She says the government has told her nothing.

Court records show that this woman also went through a mass trial in the Brownsville federal court. It’s a shame that protesters yesterday missed seeing one.

But then, there weren’t so many protesters to begin with. Instead of the expected 2,000, only about 500 people came. The small number of attendees raises questions about whether, in the wake of the executive order and the emergency injunction, Americans are losing their feelings of urgency and ire about migrant children being snatched from mothers and fathers.

But amid the disarray of Trump’s “zero tolerance” fiasco and its plain, utter meanness, more resistance is needed — and will be for some time.

Over 600 “Families Belong Together” protests are scheduled for Saturday, nationally and internationally. Washington, D.C., is expected to be the largest.

Top photo: Yunuen Alvarado, 20, from San Marcos, Texas, who is a Deferred Action for Childhood Arrivals recipient, decided to support the separated families by attending the “Families Belong Together” rally on June 28, 2018.