Ocasio-Cortez’s socialism is key to her success because it does what the Democrats have failed to do: articulate a holistic progressive vision for America. 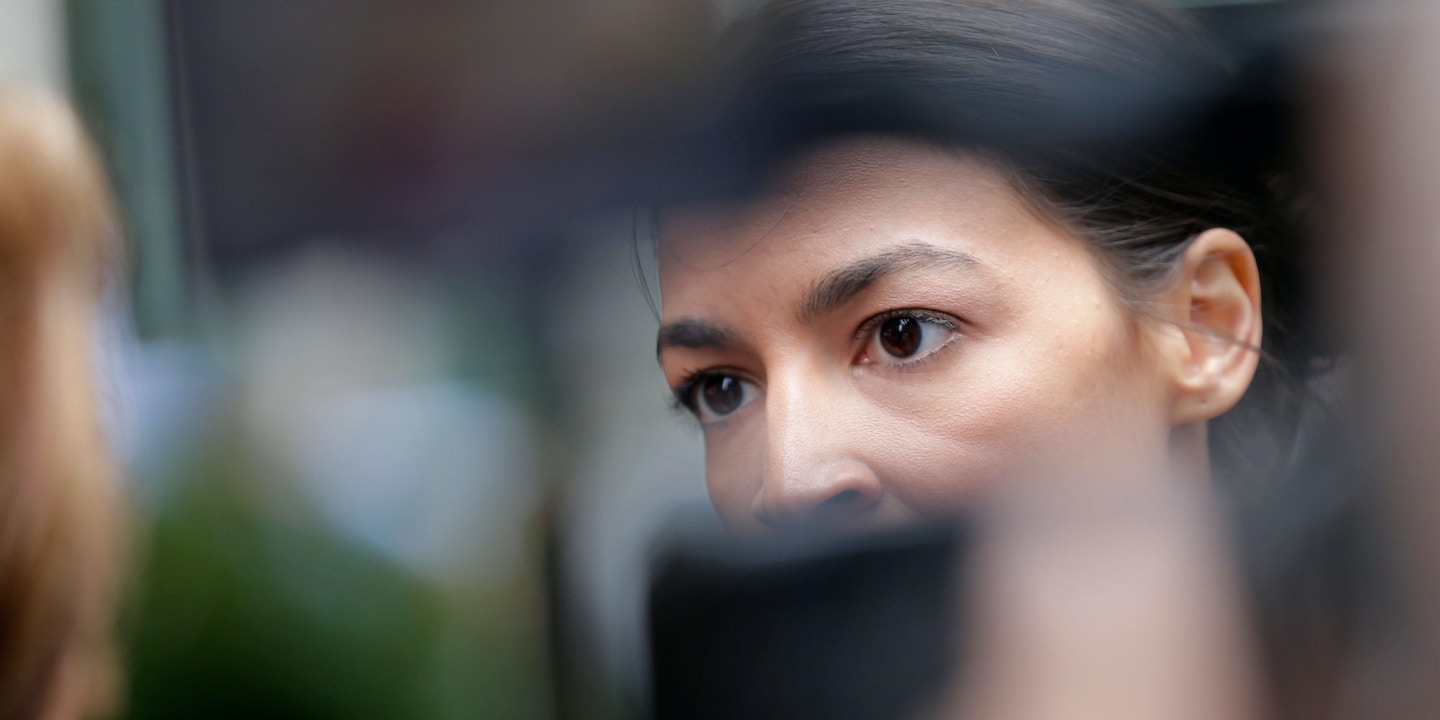 It seems that no one can stop talking about Alexandria Ocasio-Cortez, the 28-year-old former bartender who ousted 10-time incumbent Rep. Joe Crowley from his seat in New York’s 14th Congressional District last Tuesday.

But some people should.

As I’ve written before, each electoral contest between now and 2020 will be scrutinized for its predictive value, parsed for insights into how to beat Donald Trump. But some of the insights from the prognosticators who ignored the Ocasio-Cortez campaign until she won are, well, not very insightful.

Myriad horse-race callers seem hellbent on divorcing Ocasio-Cortez’s core ideology from any causal analysis of her win, with no discernible motive other than to preserve the party’s failing strategies, and the strategists paid to enact them, for another election cycle. Others downplay the radical nature of her policy platform by claiming her leftism for the center and pretending that her choice to identify as a democratic socialist is a distinction without a difference.

“While Ocasio-Cortez borrowed some of Sanders’s language and policy ideas,” he writes, “she also embodied a more varied conflict with power.” How? According to Wallace-Wells, where “the Sanders movement has sometimes seemed as pedantic and single-minded as its hero, fixated on the influence of billionaires,” Ocasio-Cortez is distinguishable on the basis that “she gave interviews to The Cut and Vogue,” traveled to the Texas tent camp where migrant children are being held, and, “dressed in white,” decried the human rights abuses there.

If Wallace-Wells’s point is that Ocasio-Cortez handles intersectionality better than Sanders, it’s well-taken: She is more articulate on the subject of identity than any politician I’ve ever heard. But the political relevance of her Vogue interview or sartorial choices remain elusive to this reporter.

Meanwhile, at New York Magazine, Frank Rich was explicit that Tuesday’s results “cannot be construed as a harbinger of what might happen nationally in November.” According to Rich, “Despite her embrace of the socialist label, there is nothing radical about what Ocasio-Cortez ran on.” He argues that government-funded higher education, “Medicare for All,” and abolishing Immigration and Customs Enforcement are “solid Democratic positions.” That will be news to anyone who remembers Hillary Clinton’s 2016 primary strategy of characterizing these types of “Bernie-style” initiatives as policies that could “never, ever, come to pass,” or California Sen. Kamala Harris’s recent defense of ICE: “Yes, ICE has a purpose, ICE has a role, ICE should exist,” she said in a March interview. (She’s since revised her opinion).

Rich’s mistake — a mistake I see repeated in op-ed after op-ed covering this race — is to see Ocasio-Cortez’s campaign choices as separate from a “single-minded” focus on this country’s gross and fundamentally unethical wealth disparity.

What gave Ocasio-Cortez’s platform its power is not just her rhetorical acuity — the fact that she’s frank where others are euphemistic. She’s able to be frank because her ideology is internally consistent and uncompromised by the influence of money — just as others are euphemistic where the truth would upset their donors.

Ocasio-Cortez’s socialist message is not an incidental part of a larger demographic story.

Nor can her popularity be boiled down to the fact of her racial identity and the similarly brown demographics of her district — despite many attempts to do so. Wallace-Wells, for instance, notes early in his article that the 14th District is half Hispanic and only one-fifth white. “Crowley lost because of the changing demographics in his district,” writes Dana Milbank of the Washington Post. That implication is so pervasive that Ocasio-Cortez felt the need to push back, tweeting: “Some folks are saying I won for ‘demographic’ reasons. 1st of all, that’s false. We won w/voters of all kinds.”

And she’s right. The southwestern part of the district (located in northwest Queens) was where Ocasio-Cortez performed best, with 60 to 100 percent of voters choosing her over Crowley, even though that area is only 15 to 40 percent Hispanic.

Ocasio-Cortez’s socialist message is not an incidental part of a larger demographic story. And her socialism shouldn’t be treated as a virus opportunistically riding the vector of her Latina form. Socialism is inextricable from Ocasio-Cortez’s success because it’s the secret behind her ability to do what the Democratic Party has long failed to do — articulate a holistic progressive vision for America.

Socialism is a framework that supports a belief that a country in which everyone can live with dignity is not the stuff of fantasies, of “ponies” — nor is it the selfish dream of a “privileged” populous who want something for nothing. It’s a socialist conception of the world that emboldens Ocasio-Cortez to aver, on a popular late-night show, that “in a modern, moral, and wealthy society, no person in America should be too poor to live.”

Socialism reveals that capitalism — a system that privileges markets over community — is not a natural truth, but a political choice to which there are alternatives. It shows that Jeff Bezos’s wealth cannot be understood as unrelated to the plight of Amazon’s workers, but as a consequence of their hardships. It reveals one man’s merit to be another woman’s wage theft, and challenges society to value humans outside of our ability to toil. It’s what sets up Ocasio-Cortez to talk about human dignity as nonnegotiable. Where Nancy Pelosi quips, “We’re capitalists, and that’s just the way it is,” socialism says that’s not good enough.

Wallace-Wells gets it wrong when he claims that the “central insight” of the Sanders presidential campaign was “that the Democratic establishment is as weak as the Republican one” during the Obama years.  The central insight of both the Sanders campaign and Ocasio-Cortez’s victory is that socialism as an ideology is strong.

In the aforementioned Vogue interview conducted by socialist reporter Bridget Read, Ocasio-Cortez made a critique of our current system so unheard of in the mainstream press that it reads like heresy: “When we talk about the word socialism, I think what it really means is just democratic participation in our economic dignity, and our economic, social, and racial dignity. … It is about direct representation and people actually having power and stake over their economic and social wellness, at the end of the day.  To me, what socialism means is to guarantee a basic level of dignity.”

As Ocasio-Cortez said on election night: “There’s nothing radical about moral clarity in 2018.” Except, it is a radical act to run on it.

What should frighten centrists of both parties is how unimpeachable that simple moral claim is. As Ocasio-Cortez said on election night: “There’s nothing radical about moral clarity in 2018.” Except, it is a radical act to run on it.

If anything distinguishes Ocasio-Cortez from the pack — if there is any lesson to be learned here for Democrats hoping to capture her magic going into midterms and 2020 — it should be this.

Pelosi though, whom Ocasio-Cortez has declined to support for House leadership, sees things differently. “They made a choice in one district,” she said at a news conference Wednesday. “So let’s not get yourself carried away as an expert on demographics and the rest of that. … We have an array of genders, generations, geography, and there is opinion in our caucus, and we’re proud of that. The fact that in a very progressive district in New York, it went more progressive than — Joe Crowley is a progressive, but she’s more left than Joe Crowley — is about that district.”

Hopefully, a more insightful leader will emerge who understands that while demographics are important, identity should be political only insofar as it serves an inclusive, progressive, and humanistic ideology.

Ocasio-Cortez put it best: “At the end of the day, I’m a candidate that doesn’t take corporate money, that champions ‘Medicare for All,’ a federal jobs guarantee, the abolishment of ICE, and a green New Deal. But I approach those issues with the lenses of the community that I live in. And that is not as easy to say as ‘identity politics.'”