Brett Kavanaugh’s expansive views on the government’s surveillance authority may come between him and his confirmation to the Supreme Court. If Democrats unite and refuse to support Donald Trump’s Supreme Court nominee Brett Kavanaugh as a replacement for Justice Anthony Kennedy (a big if), he will need unanimous endorsement from Senate Republicans in order to be confirmed. But there’s a chance he won’t get it.

Although most Republican senators are expected to support Kavanaugh, political observers have flagged two pro-choice GOP senators — Maine’s Susan Collins and Alaska’s Lisa Murkowski — as possible defectors. After all, Trump campaigned on the promise that he would appoint a justice who would overturn Roe v. Wade, and there’s a possibility that Kavanaugh’s appointment could enable that result.

But there is another Republican senator whose vote might also be in play: Kentucky’s Rand Paul.

Following Edward Snowden’s 2013 revelation that the National Security Agency was collecting Americans’ phone records in bulk, the libertarian-conservative Paul was furious. He filed a class-action lawsuit against the Obama administration in 2014, saying in a press release that the spying constituted a “clear and continuing violation of the Fourth Amendment.”

But a concurrence Kavanaugh authored in 2015 suggests that he has a much more expansive view of the government’s ability to conduct warrantless searches than Paul. Writing about the same NSA activities that enraged Paul, Kavanaugh was clear: “In sum, the Fourth Amendment does not bar the Government’s bulk collection of telephony metadata under this program.” 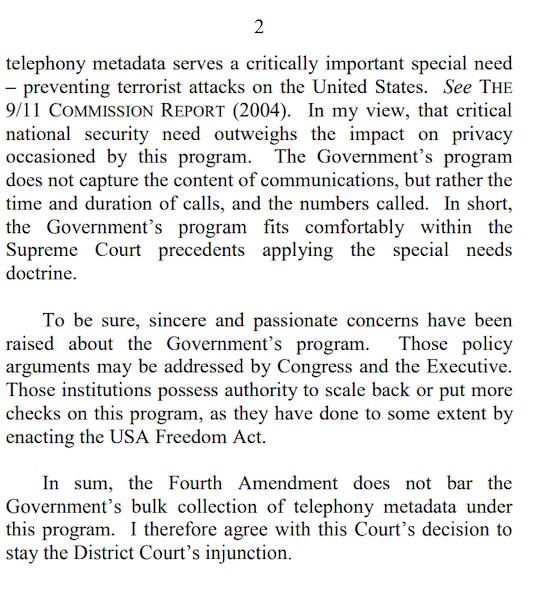 The context is a case in which Verizon Wireless subscribers sued the government, among others, for conducting a “secret and illegal government scheme to intercept vast quantities of domestic telephonic communications.” Among other claims, the plaintiffs alleged that the government’s surveillance activity violated their Fourth Amendment right to be free from unreasonable searches and seizures.

The case against the government was ultimately mooted by the cessation of the government’s bulk surveillance program, but before it was, the court had to decide on a nondispositive matter, and did so unanimously in a one-sentence summary order. Notably, Kavanaugh took that opportunity to write a concurrence — a fact which suggests that Kavanaugh had a particular interest in making his distinct point of view clear.

In his concurrence, Kavanaugh argued that “the Government’s metadata collection program is entirely consistent with the Fourth Amendment.” In coming to that conclusion, Kavanaugh relied on longstanding Supreme Court precedent, which holds that there is no reasonable expectation of privacy over communications voluntarily given to third parties, like telephone companies. Moreover, he argued in the alternative that “the Fourth Amendment allows governmental searches and seizures without individualized suspicion when the Government demonstrates a ‘special need’ — that is, a need beyond the normal need for law enforcement — that outweighs the intrusion on individual liberty.” Kavanaugh wrote that fighting terrorism counts as a “special need” on a continual basis.

When it was established in 1979, the “third-party doctrine” generally contemplated that the government would gather the type of basic information that appears on your phone bill. But as the use of smartphones, internet, and social networking sites has broadly expanded the amount personal information to which vendors have access, privacy activists have begun to criticize the doctrine as obsolete.

In a landmark decision last month, the Supreme Court pushed back on the third-party doctrine, holding that police need a warrant before they can access your phone’s location information over a period of time — information that is often used to track people of interest to the police. But that decision was decided by a 5-4 vote, meaning that Kavanaugh’s confirmation could significantly impact rulings on surveillance going forward.

The Campaign for Liberty, a nonprofit group founded by Paul’s father, former Texas Republican Rep. Ron Paul, sent out an email on July 10 criticizing Kavanaugh’s decision. “At the end of the day, we want and need a justice who will adhere to a strict constructionist view of the Constitution,” Campaign for Liberty president Norm Singleton wrote. “I’m always hopeful President Trump will keep his promises (including to Audit the Federal Reserve), but this nomination appears to go against his promise to battle against the heart and soul of the D.C. establishment.”

Matthew Hawes, a press secretary for Paul, told The Intercept, “At this time, we are not commenting beyond Senator Paul’s tweet on the selection.” But it is noteworthy that unlike many other Republican lawmakers, he has not offered effusive praise for the nomination. In a tweet, he said he looks forward to reviewing the judge’s record and meeting him with an “open mind”:

I look forward to the upcoming hearings, reviewing the record, and meeting personally with Judge Kavanaugh, with an open mind.

Paul also appeared on “Fox and Friends” on July 15 and expressed concern about Kavanaugh’s civil liberties’ record, telling them that he doesn’t know how he plans to vote yet.

Michigan Republican Rep. Justin Amash, another libertarian and ally of Paul on Capitol Hill, made his own displeasure clear in a series of tweets, in which he criticized Kavanaugh’s Fourth Amendment record and his party in Congress:

Kavanaugh is not another Gorsuch—not even close. Disappointing pick, particularly with respect to his #4thAmendment record. Future decisions on the constitutionality of government surveillance of Americans will be huge. We can’t afford a rubber stamp for the executive branch.

Paul’s undecided stance and his concerns about Kavanuagh’s view of the Fourth Amendment may reveal him to be the closest thing to a Republican swing vote on the nomination.