The plan involved Saudi ground troops crossing the land border into Qatar, and, with military support from the UAE, seizing control of Doha. 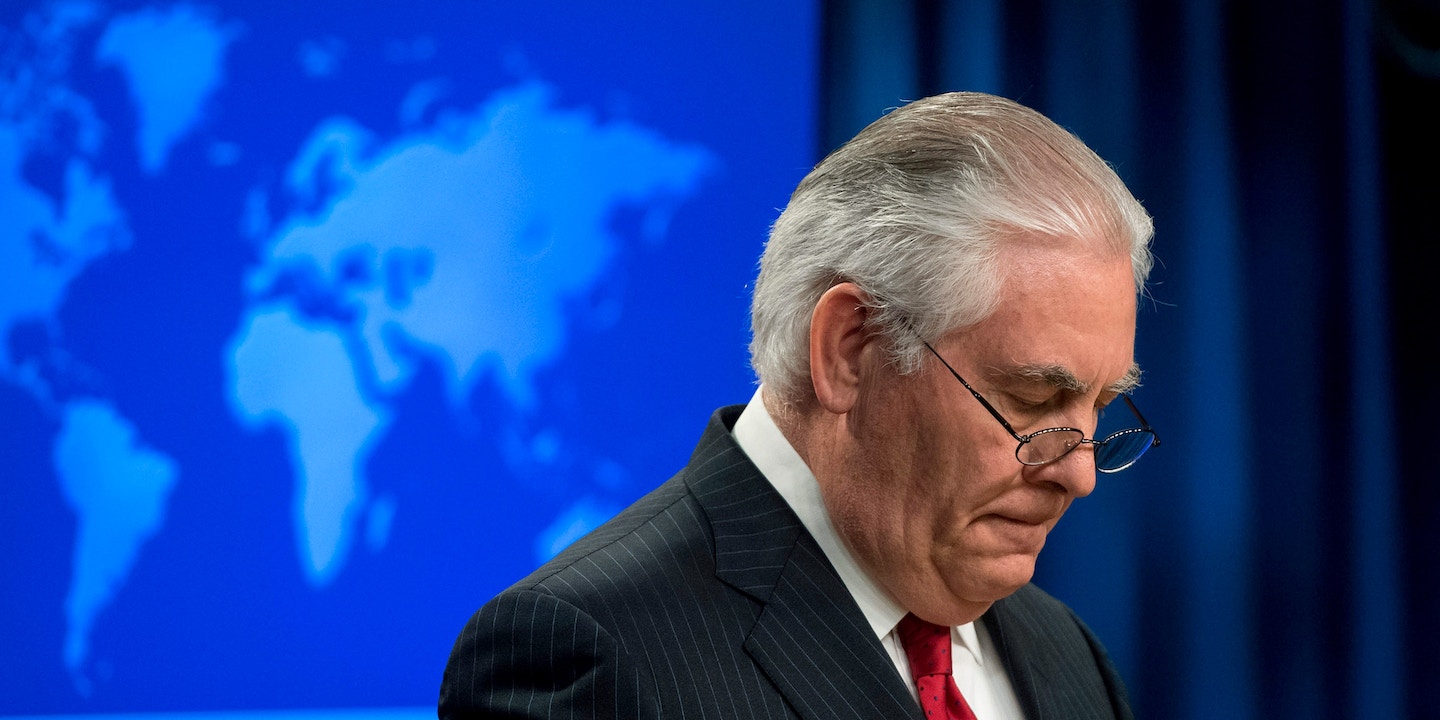 Thirteen hours before Secretary of State Rex Tillerson learned from the presidential Twitter feed that he was being fired, he did something that President Donald Trump had been unwilling to do. Following a phone call with his British counterpart, Tillerson condemned a deadly nerve agent attack in the U.K., saying that he had “full confidence in the U.K.’s investigation and its assessment that Russia was likely responsible.”

But in the months that followed his departure, press reports strongly suggested that the countries lobbying hardest for Tillerson’s removal were Saudi Arabia and the United Arab Emirates, both of which were frustrated by Tillerson’s attempts to mediate and end their blockade of Qatar. One report in the New York Times even suggested that the UAE ambassador to Washington knew that Tillerson would be forced out three months before he was fired in March.

The Intercept has learned of a previously unreported episode that stoked the UAE and Saudi Arabia’s anger at Tillerson and that may have played a key role in his removal. In the summer of 2017, several months before the Gulf allies started pushing for his ouster, Tillerson intervened to stop a secret Saudi-led, UAE-backed plan to invade and essentially conquer Qatar, according to one current member of the U.S. intelligence community and two former State Department officials, all of whom declined to be named, citing the sensitivity of the matter.

In the days and weeks after Saudi Arabia, the UAE, Egypt, and Bahrain cut diplomatic ties with Qatar and closed down their land, sea, and air borders with the country, Tillerson made a series of phone calls urging Saudi officials not to take military action against the country. The flurry of calls in June 2017 has been reported, but State Department and press accounts at the time described them as part of a broad-strokes effort to resolve tensions in the Gulf, not as an attempt by Tillerson to avert a Saudi-led military operation.

Tillerson made a series of phone calls urging Saudi officials not to take military action against Qatar.

In the calls, Tillerson, who dealt extensively with the Qatari government as the CEO of Exxon Mobil, urged Saudi King Salman, then-Deputy Crown Prince Mohammed bin Salman, and Foreign Minister Adel al-Jubeir not to attack Qatar or otherwise escalate hostilities, the sources told The Intercept. Tillerson also encouraged Defense Secretary Jim Mattis to call his counterparts in Saudi Arabia to explain the dangers of such an invasion. Al Udeid Air Base near Doha, Qatar’s capital city, is the forward headquarters of U.S. Central Command and home to some 10,000 American troops.

Pressure from Tillerson caused Mohammed bin Salman, the de facto ruler of the country, to back down, concerned that the invasion would damage Saudi Arabia’s long-term relationship with the U.S. But Tillerson’s intervention enraged Mohammed bin Zayed, the crown prince of Abu Dhabi and effective ruler of that country, according to the U.S. intelligence official and a source close to the Emirati royal family, who declined to be identified, citing concerns about his safety.

Later that June, Mohammed bin Salman would be named crown prince, leapfrogging over his cousin to become next in line for the throne after his elderly father. His ascension signaled his growing influence over the kingdom’s affairs.

Qatari intelligence agents working inside Saudi Arabia discovered the plan in the early summer of 2017, according to the U.S. intelligence official. Tillerson acted after the Qatari government notified him and the U.S. embassy in Doha. Several months later, intelligence reporting by the U.S. and U.K. confirmed the existence of the plan.

The plan, which was largely devised by the Saudi and UAE crown princes and was likely some weeks away from being implemented, involved Saudi ground troops crossing the land border into Qatar, and, with military support from the UAE, advancing roughly 70 miles toward Doha. Circumventing the U.S. air base, Saudi forces would then seize the capital.

On June 20, State Department spokesperson Heather Nauert told reporters that Tillerson had “more than 20 calls and meetings with Gulf and other regional and intermediate actors,” including three phone calls and two meetings with Jubeir. “The more time goes by, the more doubt is raised about the actions taken by Saudi Arabia and the UAE,” she said.

A spokesperson for the State Department told The Intercept last week that “throughout the dispute, all parties have explicitly committed to not resort to violence or military action.” Tillerson, reached through a personal assistant, did not respond to interview requests.

Pentagon spokesperson Lt. Cmdr. Rebecca Rebarich told The Intercept that although Mattis meets regularly with the secretary of state, the “details and frequency of those meetings are confidential.”

“The Department of Defense has made clear that the persistent Gulf rift puts at risk mutual regional security priorities and has encouraged all parties seek resolution,” Rebarich said. “It is critical that the [Gulf Cooperation Council] recovers its cohesion as the proud Gulf nations return to mutual support through a peaceful resolution that provides for enhanced regional stability and prosperity.”

Spokespeople for the Saudi and UAE embassies did not respond to multiple requests for comment. A spokesperson for the Qatari embassy in D.C. also did not respond to interview requests from The Intercept. None of the information in this story was provided by Qatari government officials or the country’s paid public relations consultants.

The invasion plan raises questions about interventionist tendencies on the part of two of the U.S.’s closest allies and largest weapons clients. In recent years, both countries have demonstrated a willingness to use military force to reshape politics in the Gulf, intervening in Bahrain to suppress an Arab Spring uprising in 2011 and waging a three-year, U.S.-backed war that has devastated Yemen.

Robert Malley, president and CEO of Crisis Group and a former top Middle East adviser to President Barack Obama, said that since the summer of 2017, Qatari officials have consistently told him that their country had been threatened with invasion.

“There is little doubt that senior Qatari officials with whom I spoke were convinced — or at least acted as if they were convinced — that Saudi Arabia and the UAE had been planning a military attack on their country that was halted as a result of U.S. intervention,” Malley told The Intercept.

Tillerson’s attempts to de-escalate the conflict in the Gulf diverged from the signals sent by the White House. Trump offered a full-throated public endorsement of the blockade, tweeting that “perhaps this will be the beginning of the end to the horror of terrorism.” As Tillerson called on the Gulf countries to lift their embargo, Trump told reporters that “the nation of Qatar, unfortunately, has historically been a funder of terrorism at a very high level.”

According to one news report, Tillerson was frustrated with the White House for undercutting him, and his aides suspected that the line in Trump’s prepared Rose Garden remarks had been written by UAE Ambassador Yousef Al Otaiba, a powerful D.C. player who maintained “almost constant phone and email contact” with Trump’s son-in-law Jared Kushner, according to Politico.

“Senior Qatari officials with whom I spoke were convinced — or at least acted as if they were convinced — that Saudi Arabia and the UAE had been planning a military attack on their country.”

At the time, Kushner was personally handling much of the administration’s diplomacy with the Gulf states, and the leaders of Saudi Arabia and the UAE were choosing to go through him instead of the U.S. defense or intelligence establishments. Kushner communicated directly with the crown princes of Saudi Arabia and the UAE using the encrypted messaging service WhatsApp.

Some Gulf watchers speculate that the incentive for the planned invasion may have been partly financial. Saudi Arabia’s “cradle to grave” welfare system relies on high oil prices, which plummeted in 2014 and have not fully recovered. Since the current king came to power in 2015, the country has spent more than a third of its $737 billion in reserves, and last year, the Saudi economy entered a painful recession. In response, the government has looked for ways to raise money, including by selling shares in the state-owned oil company, Saudi Aramco.

“It’s unsustainable,” said Bruce Riedel, a senior fellow at the Brookings Institute and 30-year CIA officer, in a lecture last November. “In the three years since [King Salman] ascended to the throne, one third of Saudi Arabia’s reserves have already been spent. You don’t need to have an MBA from the Wharton school to figure out what that means six years from now.”

If the Saudis had succeeded in seizing Doha, they would potentially have been able to gain access to the country’s $320 billion sovereign wealth fund. In November of last year, months after the plan collapsed, the Saudi crown prince rounded up and detained dozens of his relatives in the Ritz-Carlton Riyadh, forcing them to sign over billions in privately held assets. The government justified the detentions as a corruption crackdown, but it allowed the state to recoup billions in assets for government use.

Beginning in the fall of 2017, the crown princes in Riyadh and Abu Dhabi began lobbying the White House for Tillerson’s removal, according to the source close to the Emirati royal family and another source who is close to the Saudi royal family.

None of the current or former officials interviewed by The Intercept had direct insight into why Trump decided to fire Tillerson. But one source told The Intercept that the timing — a week before the Saudi crown prince arrived for a much-publicized visit to Washington — was significant. During that visit, MBS, as the crown prince is known, was set to discuss the Qatar crisis and future arms sales with the administration.

Four of the sources interviewed by The Intercept also pointed to an ongoing campaign by the UAE to try to provoke Qatar into escalating the crisis. Qatar has continued to complain about violations of its airspace by UAE aircraft, detailing its accusations in a letter to the U.N. earlier this year.

The content and audacity of Mazrouei’s tweets have led to speculation in Qatari media that the account is actually controlled by the crown prince of Abu Dhabi himself.

Top photo: Rex Tillerson, outgoing U.S. secretary of state, makes a statement after his dismissal at the State Department in Washington, D.C., on March 13, 2018.