The Unjust Prosecution of the Holy Land Foundation Five

Miko Peled’s new book is an exhaustive study of the U.S.’s case against five Palestinian-American defendants who were convicted under anonymous accusations. 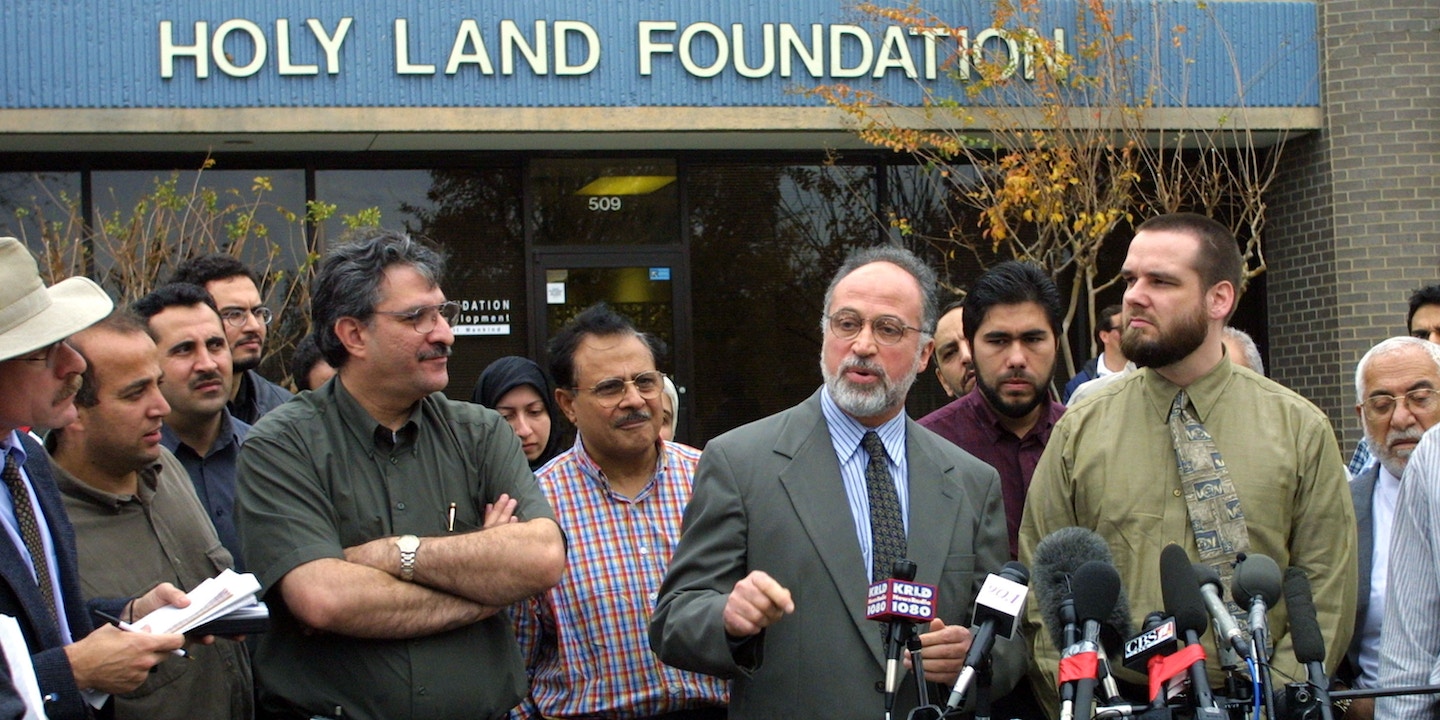 “For the law holds, that it is better that ten guilty persons escape, than that one innocent suffer,” wrote Sir William Blackstone in 1765, expressing a fundamental principle of Anglo-Saxon justice. Miko Peled, in “Injustice: The Story of the Holy Land Foundation Five,” his exhaustive study of the U.S. government’s case against five defendants from a friendless minority, demonstrates how American justice has deviated so far from Blackstone that the courts can convict a hundred innocents for one who is guilty. “Injustice” portrays a modern version of Franz Kafka’s “Trial” in which five Palestinian-Americans confront the character Joseph K.’s dilemma: “K. was living in a free country, after all, everywhere was at peace, all laws were decent and were upheld, who was it who dared accost him in his own home?”

The FBI, the Treasury Department, and other assorted police forces in Texas and California accosted them with raids on most of their family houses early in the morning on July 26, 2004. The criminal trial against the Holy Land Foundation Five — or HLF 5, as the five Arab-Americans became known, a reference to the Islamic charity they founded in 1990 — opened exactly three years later. It culminated in a hung jury. The retrial in Dallas federal court began in September 2008, and included unprecedented testimony from “Avi,” the pseudonym assumed by an Israeli intelligence agent whose qualifications the defense was unable to probe. Judge Jorge Solis, although he instructed jurors that they were allowed to weigh the agent’s credibility in light of his anonymity, nonetheless brushed aside the defendants’ right under the Sixth Amendment “to be confronted with the witnesses against him.” Nothing in the U.S. Constitution until then permitted conviction by anonymous accusations, but the court convicted all five men. 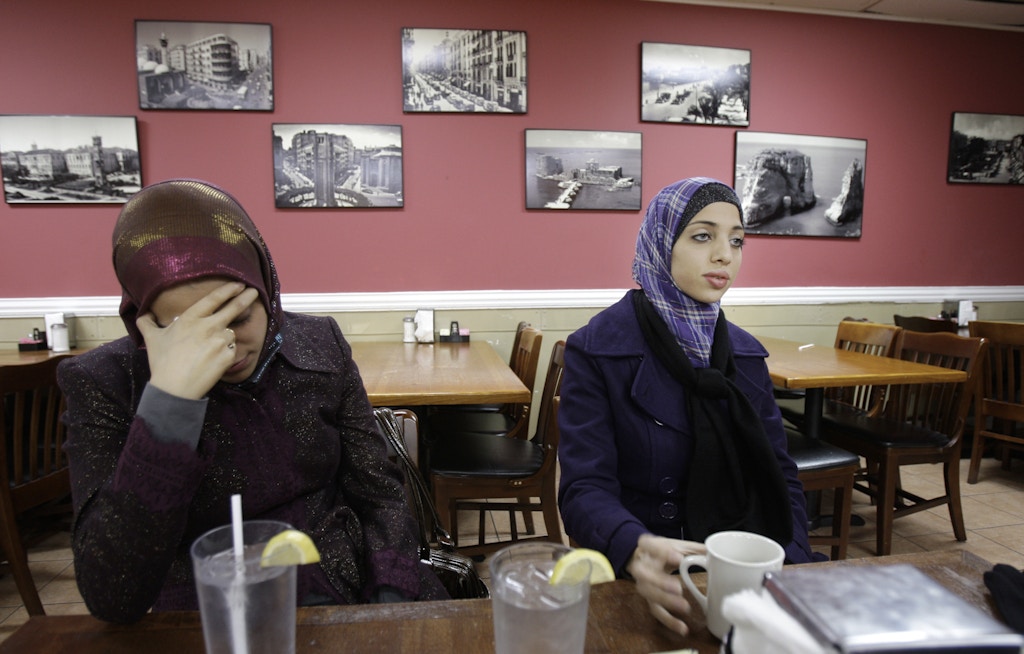 Zaira Abu-Baker, 25, holds her head as Noor Elashi, 22, speaks during an interview at a cafe in Richardson, Texas, on Nov. 20, 2008. Elashi and Abu-Baker wait each day while a jury considers whether their fathers would be found guilty.

Peled’s book is a fascinating account of immigrants making good in their new country, starting families and businesses and creating a charity to help those they left behind. Through Peled, Shukri Abu Baker, Mohammad El-Mezain, Ghassan Elashi, Mufid Abdulqader, and Abdulrahman Odeh emerge as decent human beings motivated by the desire to relieve suffering, in line with their religious convictions. They remind the reader of the many Jewish Americans that were persecuted during the McCarthy era for their support of humanitarian causes espoused by organizations that J. Edgar Hoover’s FBI declared “communist front organizations.”

Peled, the son of a famous Israeli general and a passionate anti-Zionist, was living near San Diego when he heard about the case in 2011. “I felt there was something seriously wrong here,” he writes. Going to work with the same determination that made him a martial arts master in Japan, Peled visited the federal prisons, dispersed throughout the penitential gulag, where the men are lodged, as well as their families in the houses where government agents seized their fathers and husbands. And he visited the men’s birthplaces in the West Bank. Hovering over his investigation is the memory of a Palestinian suicide bombing in Jerusalem on September 4, 1997, that killed his 13-year-old niece, Smadar Elhanan. Peled shares with Smadar’s parents — his sister Nurit Peled-Elhanan  and her husband Rami — the belief that Israel’s treatment of Palestinians, rather than charity, caused the suicide bombings, killed his niece, and is causing the deaths of more Israelis and Palestinians. Peled’s moving account is likely to outrage Israel’s defenders, to whom it may read like hostile propaganda, as well as its critics, reinforcing their view of Israeli influence over America’s judiciary, legislature, executive branch, and media.

The charges stemmed from the men’s involvement with the Holy Land Foundation, then America’s largest Muslim charity, that sent aid to Palestinians throughout the Middle East, as well as to refugees and war victims in Bosnia, Kosovo, Chechnya, Turkey, and Africa. The men consulted the U.S. Treasury Department to assure compliance with all laws governing nonprofit organizations. In Israel, the HLF was affiliated with a legal Israeli-Palestinian charity and worked with the U.S. Consulate in Jerusalem. Aid to Palestinians, many of them children orphaned in the conflict between occupier and occupied in the West Bank and Gaza, prompted Israel to investigate the charity and the U.S. to follow suit. While unable to prove a direct link between the HLF and Hamas, which President Bill Clinton declared a Foreign Terrorist Organization in 1995, prosecutors alleged that civilian aid to Palestinians meant more resources for Hamas to attack Israel.

“The government also presented evidence,” noted a statement from the Justice Department, “that several HLF defendants have family members who are Hamas leaders, including Hamas’s political chief, Mousa Abu Marzook, who is married to a cousin of Ghassan Elashi, HLF’s former chairman of the board.” Married to a cousin? No comment. Mahdi Bray, executive director for the Muslim American Society, speaks to reporters outside a federal court building on July 24, 2007, in support of the Holy Land Foundation’s top officials, who were on trial in Dallas.

One accusation in the 108-count indictment stated that the Holy Land Foundation encouraged suicide bombings by providing welfare to the bombers’ children. Having pored over trial briefs and transcripts, Peled doubted the government’s logic: “The defense demonstrated clearly that of the lists of orphans, none of their fathers were involved in what could be described as terrorism. Furthermore, out of roughly 200 suicide bombers that operated in Palestine at the time, none had children.” In fact, the HLF sent money to the children of men that Hamas had assassinated for collaborating with Israel.

The verdict in United States of America v. Holy Land Foundation for Relief and Development was either “the largest victory against terrorist finance in the U.S. since the 9/11 attacks,” as the FBI claimed, or a political decision in which five innocent men are serving between 15 and 65 years in federal penitentiaries — meaning, for most of them, the rest of their lives. Either way, the closure of the HLF charity and the incarceration of its sponsors, in Peled’s view, had little effect beyond the suffering of the defendants and their families: “As I write, it has been fifteen years since the HLF office was closed, and Hamas is doing fine.”