Democrats Complain About Green Party “Spoilers,” but Few in Congress Back a Solution: Ranked-Choice Voting

Recent Midwestern election results have generated criticism of so-called spoiler candidates. A bill in the House could help, but only five in Congress have signed on. 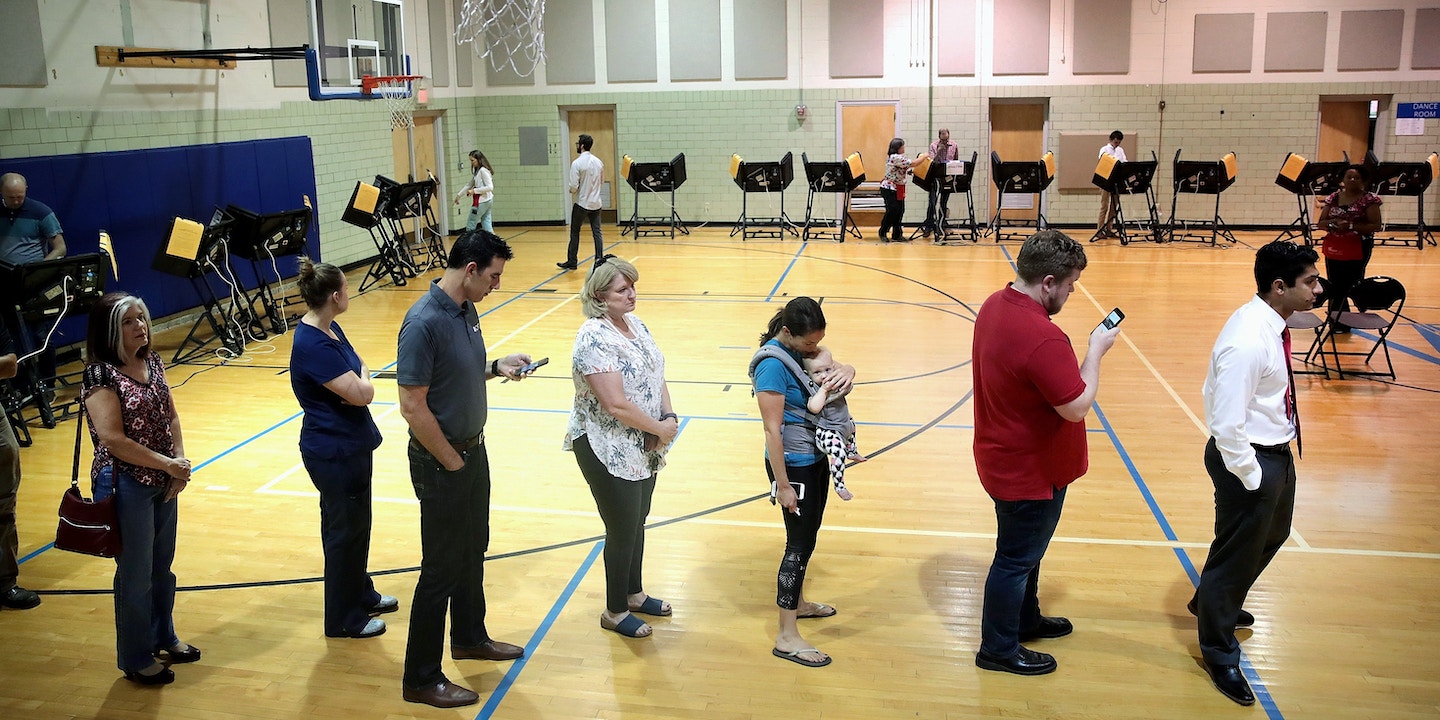 Ballots are still being counted in Ohio’s nail-biting special election in the 12th Congressional District, but it looks like Republican Troy Balderson will narrowly defeat Democrat Danny O’Connor.

As of the time of publication, the vote tally is 101,772 for Balderson and 100,208 for O’Connor. But with Green Party candidate Joe Manchik garnering 1,129 votes votes, some Democrats have projected their frustration about their loss onto third parties.

Of course, even with all of Manchik’s votes, O’Connor would still come up 435 votes short. But math hasn’t stopped Democrats from blaming the Green Party.

Adam Best, founder of the sports blog FanSided and better known for his anti-Donald Trump Twitter presence, quipped that Green Party voters just want “a cookie” for being “nonconformist,” and are indifferent to the negative consequences of a spoiler vote. Comedian Kathy Griffin echoed that sentiment, tweeting, “Green Party voters..no one is saying you can’t vote for your candidates….but don’t tell me you care about the environment if you know your vote will make the difference between a Dem winning over a Rep and you still choose to vote for your candidate who has NO chance of winning.”

“Hi. I’m a Green Party voter. I love the environment so damn much I keep accidentally electing climate-change deniers who are owned by the fossil fuel industry. Do I get a cookie now for being a nonconformist?”

Actress and activist Alyssa Milano lamented that Green Party votes were evidence of “Russian meddling,” while the political blog Palmer Report tweeted, “Green Party voters are even worse than Trump supporters” because “Green Party voters know Trump is destroying everything, yet they choose to vote in a way that hands him more power.”

You know what sucks?

Because of our unwillingness to pass policy that protects our election integrity, I immediately think the Green Party votes tonight are Russian meddling.

Why else would anyone cast a protest vote in Ohio when there’s so much at stake?#OH12

If this sounds familiar, it might be because this reasoning has been deployed since America’s first elections, and especially since 2000, when Ralph Nader won more votes than Al Gore’s loss margin in Florida — the state that decided the 2000 presidential election. (Few ever raise the fact that 308,000 registered Democrats voted for George W. Bush in Florida that year, over nine times the 34,000 who voted for Nader.)

But even if we were to credit the assessment that Green Party candidates are responsible for spoiling multiple presidential elections, and now, Ohio’s 12th District, it remains true that the Democratic Party has shown little interest in addressing the underlying cause of the spoiler effect: our first-past-the-post voting system.

In our current system, the person who wins the most votes wins the election. As a result, if a third-party candidate who is ideologically similar to one of the main two parties enters a race, they can split the vote, causing the less popular platform to cary the day. However, in a ranked-choice voting system, voters “rank” the candidates in order of preference. If none of the parties get to 50 percent of the vote, the least popular candidate is stricken, and their votes are allocated according to the second choice of the voter. Meaning that if Stein voters had ranked Clinton second on their ballots, the votes cast by Stein voters would have gone to Clinton once it became clear that Stein finished last.

In 2017, a group of House Democrats, led by Virginia Rep. Don Beyer, introduced H.R. 3057, the Fair Representation Act, which would require every congressional district in America to use ranked-choice voting. It would also require districts to be redrawn by independent redistricting committees, which would diminish the effects of partisan gerrymandering, and it would require the installation of multimember districts — a reform that would allow voters in each district to elect multiple lawmakers instead of just one, so that more people would be represented.

The law would make congressional elections much more competitive and also make it so that voters who feel unrepresented by the major parties, or disenfranchised because they live in a district that is staunchly in favor of one party or another, would have a greater incentive to vote.

When it was introduced, the bill had a total of three sponsors: Beyer; Rep. Ro Khanna, D-Calif.; and Rep. Jamie Raskin, D-Md.

Ranked-choice voting is employed by about a dozen different localities and states. It’s used in municipal elections in Oakland and San Francisco, California; Minneapolis and St. Paul, Minnesota; and even by the academy. Earlier this year, Maine adopted ranked-choice voting for its June primaries over the legislature’s attempts to block the voter-driven ballot initiative that first brought the system to Maine. The result? Voter turnout was up, implementation was uncomplicated and inexpensive, few errors were made, and outcomes were perceived to be fair.

Ranked-choice voting made news this spring, when the two most left-wing candidates for San Francisco’s mayoral election formed a tactical alliance to win the others’ second preference votes. While they were technically competing against each other, they were also able to cooperate to empower their shared ideology — the beauty of a system that allows voters to cast multiple votes.

And advocates of ranked-choice voting raised the benefits of alternative voting schemes when, after Michigan’s recent governor’s race, the results suggested that if the third place candidate, who branded himself as a progressive, had been reallocated in a ranked-choice system, Abdul El-Sayed, a genuine progressive, might have come within arm’s reach of winning.

Europe provides several examples of other voting alternatives. French President Emmanuel Macron, for instance, ran on introducing greater proportional representation in the French legislature, and is slowly making good on that promise. Under proportional representation, parties are allotted seats based on the total percentage of the vote they get. Under that system, if Democrats were to receive 51 percent of the vote, Republicans 44 percent, and Greens 5 percent, they’d each get that percentage of seats in Congress.

Proportional representation is how elections are run in countries like Sweden, Germany, and Israel. It’s no surprise that legislatures in these countries often have seven or eight different political parties with significant clout, which then work together in coalitions on legislation, offering far more choices to voters.

By contrast, American political parties tend not to offer third-party voters any sort of election reform plans — even to win over their votes.

Michelle Obama, one of Clinton’s more powerful surrogates, neatly summarized the argument against voting for third parties in 2016, telling voters, “Here’s the truth: Either Hillary Clinton or her opponent will be elected president this year. And if you vote for someone other than Hillary, or if you don’t vote at all, then you are helping to elect Hillary’s opponent.”

Even after the election, in her campaign memoir, Clinton seemed focused on her entitlement to votes rather than policies which could prevent future spoilers. “In each state, there were more than enough Stein voters to swing the result, just like Ralph Nader did in Florida and New Hampshire in 2000. Maybe, like actress Susan Sarandon, Stein thinks electing Trump will hasten ‘the revolution.’ Who knows?” she flippantly wrote.

This attitude is particularly disheartening when one considers that third-party votes are, unlike the failure to cast a ballot, a direct expression of disenchantment with the two major parties. And black voters are particularly hurt by the two-party system, as votes cast by historically marginalized groups are often presumed rather than earned.

Although the Green Party, stymied by ballot-access battles and boxed out by the major party giants, struggles to mount candidates with sufficient mainstream qualifications to capture more than a narrow slice of the vote, it has been a much more consistent advocate for progressive ideals than the Democratic Party has been. Its members are often those who care more, not less, about left-wing ideological commitments. Thus, it feels particularly cruel to attack engaged voters rather than flawed institutions.

As Elizabeth Bruenig recently argued, there’s some value to believing in something — especially when a “lesser of two evils” mindset forces Democrats ever rightward. The goal should not be to attack the left, but to dismantle the voting system which forces such regressive results. In the interest of representation and ideological integrity, it’s clear that it’s time to give alternative voting schemes a try.

Top photo: Voters in Ohio’s 12th Congressional District wait in line to cast a ballot for their next congressperson on Aug. 7, 2018, in Columbus, Ohio.