A prison guard union doesn’t want incarcerated people to have tablets — and it’s about preserving a system of mass incarceration. 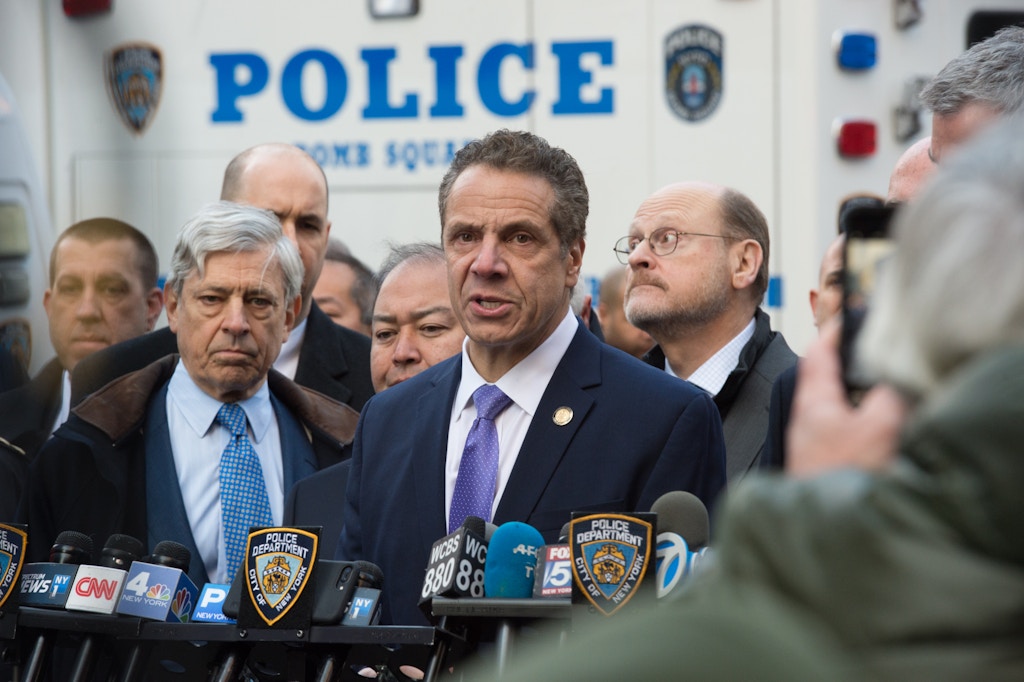 New York Gov. Andrew Cuomo speaks at a press conference as police respond to a reported explosion at the Port Authority Bus Terminal on Dec. 11, 2017 in New York.

In its first few seconds, a new television advertisement targeting New York Gov. Andrew Cuomo appears to be an appeal for increased funding for public education. “Governor Cuomo is shortchanging our kids,” the short video begins. “In New York state, our classrooms are overcrowded and outdated.” This, however, is not a message from the state’s teachers unions, nor is it a campaign effort from gubernatorial challenger Cynthia Nixon. In fact, the ad is not about education at all.

Fifteen seconds in, the ad’s true intent is revealed: “Instead of taking care of our children, the governor’s radical agenda takes care of criminals.” The video is part of a six-figure TV, radio, digital, and outdoor advertisement campaign launched last month by the New York State Correctional Officers and Police Benevolent Association, or NYSCOPBA, with the aim, according to a union statement, “to put public safety before primary party politics this campaign season.”

The ad blitz is the latest cynical propaganda effort by a major law enforcement union to stymie and demonize prison reform by drawing on menacing and unsubstantiated claims that frame “dangerous criminals” as irredeemable threats — people that are apart from and in conflict with “the public.”

The campaign asks the public to call the governor’s office and urge him to reverse its criminal justice reform policies, including giving 35,000 parolees the right to vote and providing prisoners with tablet computers. Like fellow New York law enforcement union, the New York City Patrolmen’s Benevolent Association, the NYSCOPBA campaign decried parole reform that has assisted the release on parole of elderly prisoners, convicted decades ago, as “cop killers.”

“These ads constitute a step in the ongoing campaign of the police organizations to overturn hard-won gains in decreasing mass incarceration.”

“These ads constitute a step in the ongoing campaign of the police organizations to overturn hard-won gains in decreasing mass incarceration, improving the treatment of incarcerated people, and reducing New York’s reliance on punishment in place of social programs,” said Laura Whitehorn, an organizer with the project Release Aging People in Prison and a former political prisoner. “These gains now sit squarely in the crosshairs of the NYSCOPBA ad campaign.”

The recent steps forward for advocates of prison reform — including limiting the use of solitary confinement for young people, increasing the parole releases of people who pose low or no risk to public safety, and prohibiting the charging of young people as adults — represent, as Whitehorn noted, “massive efforts by communities around New York state who have traditionally had little access to the power wielded by the police unions.” NYSCOPBA cites Cuomo’s “radical agenda,” but the governor’s moderate and reasonable criminal justice reforms have been the result of years of applied activism and pressure.

Campaigns like NYSCOPBA’s — straight from the playbook of law enforcement union lobbying — go far beyond advocacy for union members’ well-being, wages, and job security. They seek to reinscribe the myth of the criminal “other” — people deserving only of punishment and exclusion. It is the carceral logic through which law enforcement continues to find justification for its authority.

Correctional officer and police unions have an obvious interest in opposing criminal justice reform when it comes to officer accountability and discipline — and with making sure that the criminal justice system keeps catching people in its maw: When prisons close, prison guards lose jobs. Law enforcement unions have for decades weaponized consistently racist narratives of criminal threats — threats that require management and punishment — to support policies that uphold mass incarceration.

The California Correctional Peace Officers Association, which spends about $8 million per year on lobbying, poured $100,000 into supporting the state’s 1994 “three strikes” laws and over $1 million to beat Prop 66 in 2016, which would have reduced the number of crimes that carry mandatory life sentences. The union spent nearly $2 million supporting Jerry Brown’s gubernatorial campaign, extracting support for prison expansions in return.

In Illinois, the state’s largest public-sector union waged a campaign with law-and-order politicians against the closure in 2013 of Tamms Correctional Center, a notorious Supermax prison. The campaign described the people locked up in Tamms as “the worst of the worst” in an attempt to justify the prison’s existence and vindicate its well-documented brutality.

But often these campaigns — like NYSCOPBA’s — go beyond veiled appeals for continued job security to focus squarely on opposing greater rights and better treatment for prisoners and former prisoners. Among the policies named by NYSCOPBA, for example, is Cuomo’s decision this year to grant 35,000 parolees the right to vote. “NYSCOPBA remains concerned that this will allow murderers, rapists, and sex offenders to enter polling sites in schools, community centers, and other places we designate as safe spaces for children, families, and seniors,” said Matt Hamilton, the union’s director of public affairs, in a statement. Similarly, the union opposes the plan to supply 51,000 incarcerated people with computer tablets. “Concerns about whether inmates would be able to hack these devices to do things they are not permitted must be taken seriously,” Hamilton said.

The NYC Correction Officers’ Benevolent Association deployed a similar logic last week to disavow a new law that would allow incarcerated people in New York City jails to use phones there for free. “Now the gangs will definitely be able to continue to run their operations from inside the jails,” Elias Husamudeen, the union’s president, told the New York Times. “They will definitely be able to continue to communicate free of charge with the other members of their gangs who may not be in jail.”

It’s not clear what the corrections officers’ union gains from its advocacy on issues like parolee enfranchisement and access to free technology. Suffice to say these campaigns are not legitimate appeals for public safety: Claims about gang organizing, hacking, and predators in polling booths are offered up without grounds and would only be believed by members of the public who already see prisoners as inherent dangers to society.

In a country that conflates blackness with criminality, law enforcement narratives that equate criminality with evil are intractably racist.

Yet if law enforcement unions are driven by economic concerns for their workers, this drive is couched in and shaped by an almost theodicean narrative in which harsh criminal justice is vindicated as the management of evil. And, in a country that conflates blackness with criminality, law enforcement narratives that equate criminality with evil are also intractably racist. When the New York City Patrolmen’s Benevolent Association President Pat Lynch called Herman Bell an “animal” after the former Black Panther was granted parole after over four decades in prison, we didn’t need to be dogs to hear that whistle.

If the conflict between law enforcement unions and prison reform rested only on the threat posed to certain jobs by closing prisons, there could be an opening for solidarity between prison workers, prisoners, and the broader labor movement. “Ultimately,” wrote historian and labor organizer Austin McCoy in a 2016 New Labor Forum paper, “it is likely that ensuring economic justice for prisoners and workers will require connecting advocacy for decarceration to the call for mass employment, or a universal job guarantee, which in turn would necessitate connecting movements against mass incarceration to the larger labor movement.”

But that’s not how it works out. Law enforcement unions are different from other public-sector unions, both in terms of their vast political clout at a time when organized labor in the U.S. is weak, and their historic, structural commitment to elevating “blue lives” at the expense of others, particularly black lives.

Law enforcement unions, therefore, are not simply barriers to criminal justice reform and decarceration because of economic concerns for their members. As their campaigns and rhetoric make clear, their commitment is not only to mass incarceration as a job provider, but to the system of racist oppression and unjust societal organization that these jobs uphold.