Last week, the U.S.-backed, Saudi-led coalition killed at least 40 kids in one attack in Yemen. We can’t let these crimes slip by. 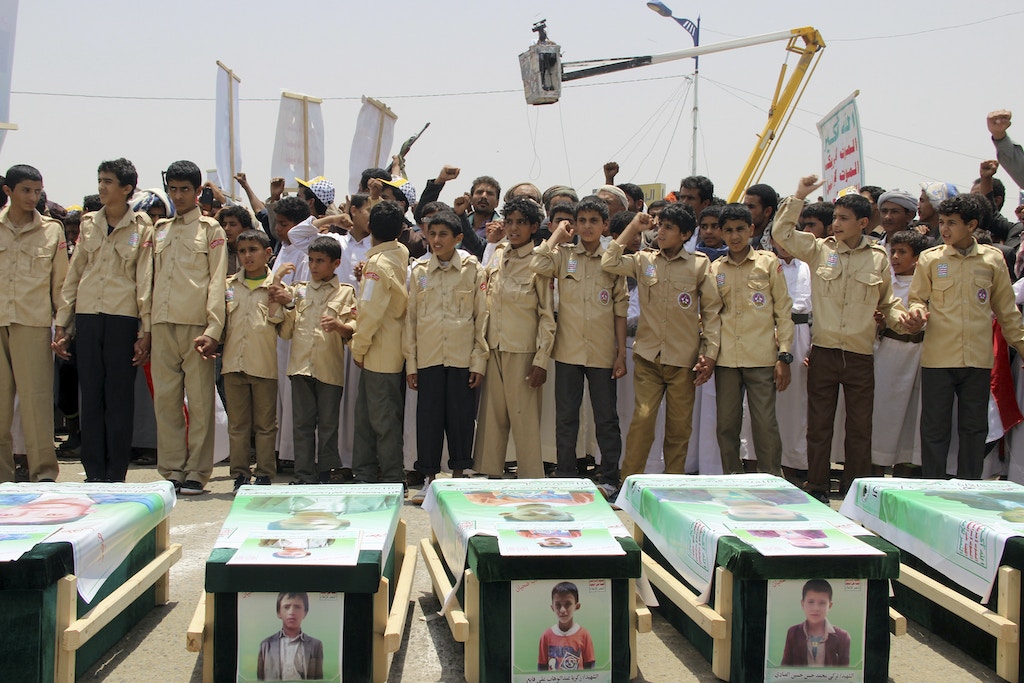 Yemeni children take part in a mass funeral in the northern Yemeni city of Saada on Aug. 13, 2018, for children killed in an airstrike by the Saudi-led coalition last week.

Every single day of the week, I receive tons of personal emails from people all over the country. At least half of them are heartbreaking stories of personally experienced bigotry, racism, or police brutality.

There’s a Baltimore police officer shattering the face and ribs of an unarmed, nonviolent black man. There’s a Mississippi health care worker openly calling a black woman “nigger” to her face after purchasing doughnuts from her. There’s a Tulsa beauty shop employee punching a black woman so hard in the face that she had to go to the hospital to get her lip stitched back together. There are Florida prosecutors finally deciding to charge a white man in the shooting death of a black father who was defending his family from harassment at a local convenience store.

Then there’s new audio of President Donald Trump’s campaign staff openly discussing how he allegedly called black people niggers and how to contain the potential damage.

That’s all just from this week.

It’s overwhelming, not just for the victims — though certainly for them — but also for the millions of observers left to wonder if any of those things could happen to them or their loved ones.

James Baldwin once wrote, “To be a Negro in this country and to be relatively conscious is to be in a rage almost all the time.” When he wrote those words, social media had not been invented yet. Now, in 2018, it’s hard to be black in America and not be relatively conscious — the internet has made it easy for bad news to get around — so there’s a lot of rage to go around.

Yet as we are increasingly rage-filled and frustrated about what is going on at home, many people, including myself, are flat-out missing egregious war crimes abroad.

I’m an informed dude — but still, between fighting to protect my own family, speaking out against injustice in the United States, and helping local candidates with their campaigns, I am absolutely embarrassed to say that I just learned the full extent of what I think may be one of the most egregious crimes against humanity in recent memory. A child injured in a deadly Saudi-led coalition airstrike on Thursday rests in a hospital in Saada, Yemen, on Aug. 12, 2018.

Last Thursday, a bus carrying dozens and dozens of happy, young school boys in Yemen was struck by a missile. It blew the bus and most of the children to bits. At least 40 of the children died and 56 more children were injured. The carnage was unthinkable. Some of the kids who died had their bodies broken down to unrecognizable fragments.

And guess what? The missile was fired by a Saudi- and United Arab Emirates-led coalition working closely with the U.S. to carry out a brutal war in Yemen. The U.S. is giving military and intelligence support to the coalition, which human rights groups have said might be committing war crimes.

So, we have to ask: Do Yemeni lives matter?

If these beautiful boys were Americans or Europeans, how much more coverage would this horrendous attack have received?

This many kids were not killed in the Oklahoma City bombing.

This many kids have never even been killed in this nation’s worst mass shooting.

In one fell swoop, the American-backed, American-armed Saudi regime murdered more kids than have ever been killed in one single attack in modern American history.

Yet I can count the number of influential politicians in the United States speaking about this on one hand. Do the others not care? Is it that they are complicit in their support of the military industrial complex and the Saudi regime, so they don’t feel like they can really speak out? Or are they overwhelmed too?

Whatever the case, we must find a way to have a truly international worldview — so that when something this horrendous happens, it registers with us and outrages us the way it truly should.