Will Shareholders Lose the Right to Sue Over Corporate Fraud? 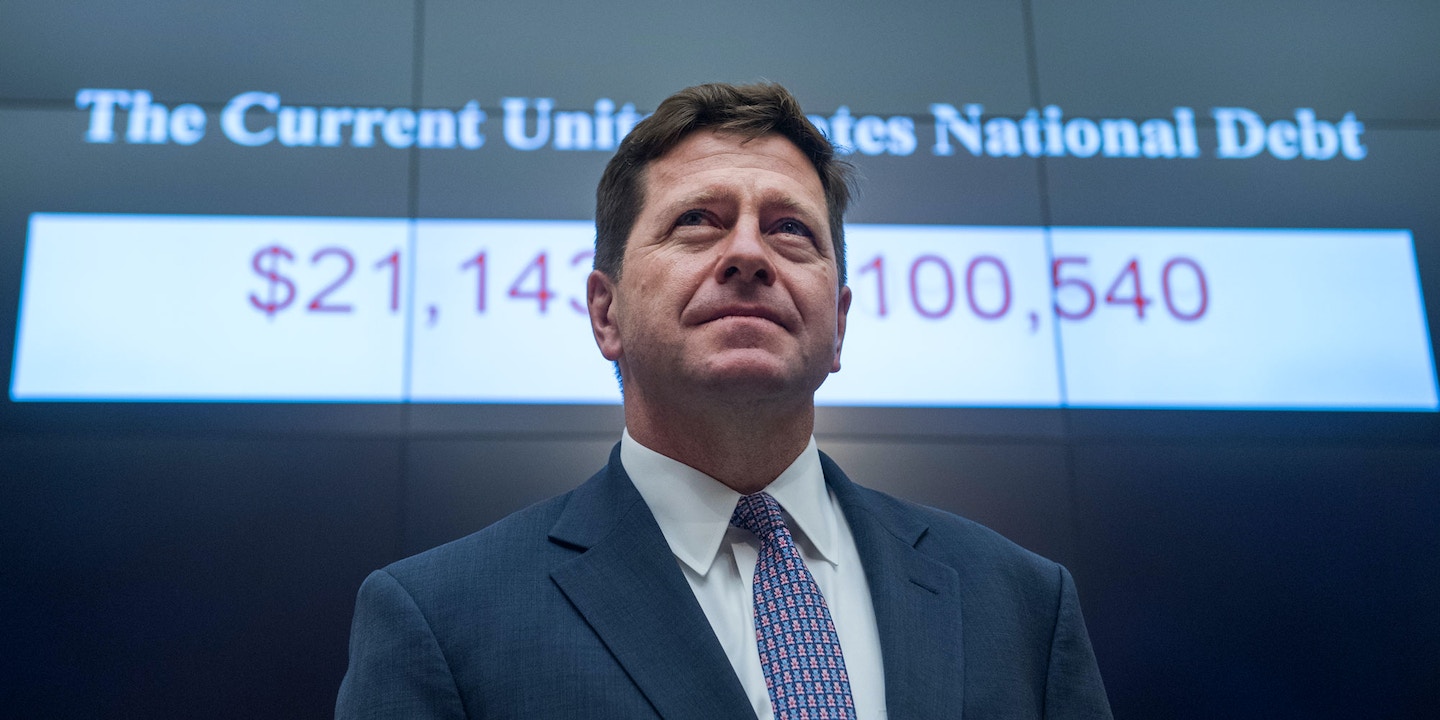 In an earnings announcement issued after the markets closed on July 25, the day he bought the shares, Facebook released numbers showing that ad sales and user growth had slowed. Securities analysts rushed to lower their price targets after a conference call with Facebook management, with one referring to the managers’ revelations as “bombshells.”

Kacouris filed a lawsuit in federal court in Manhattan on July 27, seeking to represent all shareholders who purchased Facebook shares between the company’s sunny quarterly report of April 25, when CEO Mark Zuckerberg said the year was “off to a strong start,” and the disappointing report of July 25. Kacouris charged that the company failed to disclose tapering revenue growth, fewer active users, and declining operating margins.

If proponents of deregulation have their way, people like Kacouris won’t be able to sue potentially errant companies in the future. Earlier this month, Securities and Exchange Commissioner Hester Peirce told Politico that she “absolutely” thinks that public companies should have the option to require arbitration, which would strip shareholders of their right to bring lawsuits like the one Kacouris filed. The comments by Peirce, a Donald Trump nominee who took office in January, amplified previous remarks by other SEC officials. Commissioner Michael Piwowar, for example, who departed his post in July, told an audience at the conservative Heritage Foundation last year that he would “encourage” companies to come talk to the SEC about putting mandatory arbitration clauses in their charters.

Earlier today, a coalition of 133 public advocacy groups sent a letter and a 50-page white paper to SEC chairman Jay Clayton, arguing that mandatory arbitration of shareholder disputes was bad public policy and contrary to the securities laws. “It appears there is a possibility of a sea change at the Commission” that could result in letting companies use such clauses, said Paul Bland, executive director at Public Justice, at a telephonic press briefing Tuesday afternoon.

Peirce said by email that since companies and their shareholders bear the costs both of wrongdoing by corporate managers and any resulting lawsuits, they should have some authority over how to handle corporate bad acts: “If a company and its shareholders, who are sensitive to these costs, craft an effective and lawful mechanism for ensuring that shareholders have redress for managerial wrongdoing, it does not seem appropriate for me to second-guess their decision.”

Shareholder lawsuits have long played a pivotal role in deterring corporate wrongdoing and compensating investors for fraud. “When people realized that a high-flyer firm like Enron, with a major accounting firm as auditor, could be engaged in such widespread fraud, it got people digging into the books of a lot of other companies,” said Barbara Roper, director of investor protection at the Consumer Federation of America. “And we went through a whole wave of major accounting scandals, which led to the passage of Sarbanes-Oxley.”

Over the years, major institutional investors such as pension funds and endowments have retrieved billions in compensation after companies were found to have made false or misleading statements. In 2012, Bank of America paid funds for public retirees $2.4 billion to settle allegations that it made false statements and omissions related to its acquisition of Merrill Lynch during the financial crisis.

It would be calamitous if companies could bar class-action suits, said Dennis Kelleher, president and CEO of the nonprofit Better Markets, which advocates for tighter financial reforms. “It would be the biggest anti-investor stain by the SEC in its history,” he said. “A declaration of war by the SEC against investors.” Roper says Peirce’s endorsement of the idea is “disturbing” given her influential seat at the commission. An SEC spokesperson declined to comment.

The risks of mandatory arbitration have been on vivid display in recent years, as the sexual assault allegations surrounding Hollywood’s Harvey Weinstein and Fox News’ Roger Ailes exposed the ways such provisions in employment agreements had protected the alleged perpetrators for years. For decades, investor advocates also have spoken out against mandatory arbitration requirements for complaints brought by investors against their stockbrokers, arguing that the private arbitration forum run by the securities industry disadvantages complainants. Consumer advocates have decried their use in everything from cellphone contracts to nursing home agreements.

Now, shareholders could lose their right to sue, too. It could be a serious blow to the goal of making investors whole after fraud: Federal courts approved nearly $6 billion in securities class-action settlements in 2016, according to Cornerstone Research, a consulting firm, substantially outstripping the $4 billion in disgorgement and penalties demanded of lawbreakers by the SEC in its 2016 fiscal year. Robert J. Jackson, an SEC commissioner and critic of mandatory arbitration for shareholders, noted in a speech earlier this year that 60 cents of every dollar returned to investors in corporate fraud cases in 2016 came from private settlements, as opposed to actions brought by the SEC. He argued that investors who sue are often the last line of defense deterring insiders from committing fraud. “The cops can’t do it alone,” he said.

With arbitration as their only option, small investors wouldn’t be able to bring cases at all, Roper points out. “The costs for getting experts alone can be in the millions of dollars in one of these big cases,” she said. According to Roper, without the ability to join together in a class action and share costs, “no way would small investors have a voice.”

Up to now, the SEC has favored the right of shareholders to access the courts. In 2012, when the investment firm Carlyle Group filed its initial public offering documents with the agency, the SEC pressured Carlyle to drop a requirement that shareholders give up their right to join together in a class-action suit, noting that it was not able to conclude that the policy was “consistent with ‘the public interest and protection of investors’ as required” by the Securities Act. By last fall, though, the agency’s director of corporation finance, William Hinman, was telling an audience of institutional investors that the laws have changed since Carlyle’s attempt to quash class actions, and that the SEC would have to analyze developments “to see if we would take the same position.” Clayton has said that the issue is not a priority, but that won’t matter if a company forces the agency’s hand by filing initial public offering documents that include mandatory arbitration.

Peirce said in her email to The Intercept that, even without class-action litigation, there are “robust mechanisms in place to deter and punish fraud,” citing SEC enforcement, criminal authorities, and short sellers among them.

But SEC enforcement has been collapsing. The Securities Enforcement Empirical Database, which tracks the SEC’s enforcement actions, reported in May that in the first half of the SEC’s 2018 fiscal year, the number of new actions against public companies declined almost 70 percent compared to the same period in 2017. Total settlements of $65 million were the lowest semiannual total in the nine-year history of the database.

Even when the agency was aggressively bringing cases during the early 2000s, the penalties and fees it collected paled in comparison to the amounts returned to investors through class-action suits. The AFL-CIO calculated that the SEC’s actions in the wake of massive lawbreaking by Enron, WorldCom, Tyco, Bank of America, and Global Crossing accumulated $1.75 billion in penalties and fees, while private lawsuits returned more than $19.4 billion to investors who’d purchased shares of those companies.

The specter of having shareholder lawsuits shut down is spooking everyone from state treasurers in charge of billions in public funds to the SEC’s own investor advocate. In July, treasurers from California, Illinois, Iowa, Oregon, Pennsylvania, and Rhode Island wrote to Clayton to warn that forced arbitration of shareholder complaints “spells immunity for many financial actors, even the very worst.” Five months earlier, Rick Fleming, the SEC’s investor advocate, told a Washington, D.C. audience that it would be “draconian” to rob shareholders of this right.

Proponents of the idea argue that investor lawsuits simply heap more punishment on shareholders who have already been hit by the loss of their stock’s value. “If your company gets sued in a class action, this is bad news for you,” said Adam C. Pritchard, a professor of securities law at University of Michigan Law School in Ann Arbor. Shareholders bear the expense of both defending the suit and paying any settlement, he said. “It makes a bad situation even more expensive for the shareholders.”

He said class actions are additionally flawed because lawyers filing the cases don’t have an incentive to pursue the individuals responsible. “If a CEO was going to take a hit of $10 or $20 million, it could have a strong effect,” he said. “But class-action lawyers don’t want to do that because money is easier to get from a company’s insurance policy.” But such disincentives would apply to arbitration as well.

Pritchard’s own research bolsters investor advocates’ arguments that class-action plaintiffs are targeting the right companies. In a 2016 study, he and New York University law professor Stephen Choi concluded that plaintiffs’ lawyers were more likely than the SEC to pursue intentional disclosure violations. “From a policy perspective,” they wrote, “our findings offer little support to commentators who call for a shift from private actions to greater public enforcement.”

Despite encouragement from Piwowar and Peirce, companies preparing to go public haven’t yet rushed to test the waters. Roper suspects that’s because “nobody wants to be the poster child for anti-investor practices and have that be the story during their IPO.” In the meantime, though, companies that are already public could add mandatory arbitration provisions by amending their bylaws or seeking shareholder approval of an amendment to their charter to require it, she said.

It won’t be pretty for investors who are victims of corporate fraud if mandatory arbitration begins to take hold, Kelleher said. “The rap sheet on corporate America makes Al Capone look like an unsuccessful street corner mugger.” Take away investors’ right to sue, he said, and it will be “open season” for companies to bend or break the law.

This article was reported in partnership with the Investigative Fund at the Nation Institute, where Susan Antilla is a reporting fellow.