Ammar Campa-Najjar, a Working-Class Progressive, Gets a Boost From Indictment of Duncan Hunter

Ammar Campa-Najjar’s atypical campaign focused on progressive ideas and local organizing. He beat the party establishment, and now may flip the seat. 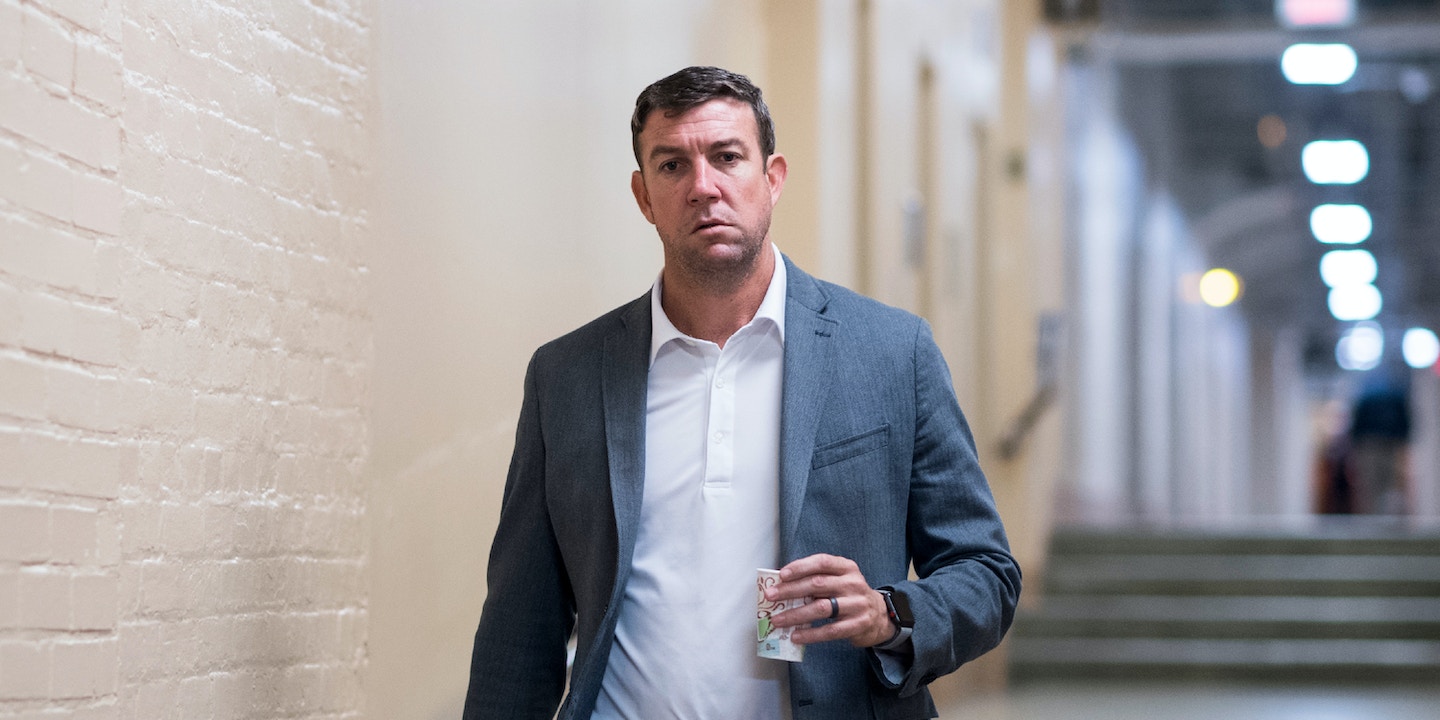 Hunter and his wife, Margaret, were indicted for regularly using campaign funds to pay for personal expenses; including numerous luxury vacations; private school tuition for their kids; a garage door for their home; fees to fly the family pet to Washington, D.C.; meals at everywhere from Spago to Taco Bell; tequila shots; and dental surgery. The indictment notes some particularly egregious violations, such as purchasing clothing at a golf store so that they “could be falsely reported to the treasurer as ‘balls for the wounded warriors.’”

Hunter, himself an Iraq and Afghanistan war veteran, has called the Justice Department charges “politically motivated” and vowed to fight them in court.

He has been under federal investigation for some time, and local Republicans were privately hoping that if he were to be indicted, it would come before the primary, so that the party could nominate somebody else in his place. Per California election laws, Hunter’s name cannot be taken off the ballot unless he seeks removal from a state judge, an extraordinary step, and one he does not appear inclined to take. Moreover, even if a candidate is removed, no write-in campaigns are allowed on general election ballots in California as a result of its “top two” law. Either Hunter and Campa-Najjar, the top two vote-getters in the June primary, will appear on the November ballot, or only Campa-Najjar will. In all likelihood, it will be the former.

California Democratic Party Chair Eric Bauman told Roll Call on Tuesday, “I think the Republicans just lost another House seat. … Surely the voters of San Diego are not going to elect a crook who’s been indicted.”

The unfolding drama has echoes of the 2006 midterms, the last time Democrats reclaimed the chamber from Republicans. In that race, two scandal-plagued Republicans — Tom DeLay in Texas and Mark Foley in Florida — could not be replaced on the ballot, turning heavily Republican districts into Democratic pickups.

That said, progressives there aren’t celebrating just yet, given the conservative lean of the district, which elected Hunter’s father to the House for some three decades before the younger Hunter replaced him. Campa-Najjar has an atypical background for a candidate for Congress, to say the least. The son of a Mexican-American mother and Palestinian-American father, he spent three years of his childhood living in the Gaza Strip. He did janitorial work to help the family as a teenager. “My mom kinda raised me by herself, for most of my life,” Campa-Najjar told The Intercept in May. “And she couldn’t afford a home — single, working-class mom, working as a receptionist at a doctor’s office, not making too much. So we moved in with my aunt, and then we lived with my grandfather, my mom’s father.” Campa-Najjar later went on to work in politics and government, with jobs with the 2012 Obama re-election campaign, the U.S. Hispanic Chamber of Commerce, the White House, and the Department of Labor.

His paternal grandfather, Muhammad Yusuf al-Najjar, was one of the masterminds of the Munich terrorist attack, in which Israeli Olympic athletes were massacred. The association has been widely covered in the local and international press. He was killed by Israeli forces in retaliation for the 1972 attack, long before Campa-Najjar was born. (A hospital in the Gaza Strip, now named for al-Najjar, was shelled by Israeli forces in 2014.)

The primary campaign pitted Campa-Najjar, running on a platform embracing “Medicare for All” and with the support of progressive organizations like Justice Democrats and Our Revolution, against Josh Butner, a moderate Navy SEAL. Butner had the backing of Rep. Seth Moulton, D-Mass., who has been boosting veterans around the country, many of them moderate or conservative; Rep. Joe Crowley of New York, the chair of the Democratic Caucus; Rep. Steny Hoyer, the No. 2 House Democrat; and the New Democrat Coalition itself. In April, The Intercept reported that Butner had claimed to be a registered independent but that records showed he was in fact a Republican.

Campa-Najjar overwhelmingly won the local party endorsement, but before the California convention met to settle on statewide party endorsements, news of the identity of his long-deceased grandfather surfaced in Israel. With the support of local rabbis, and a campaign message of peace and reconciliation, Campa-Najjar easily overcame the association, winning the endorsement of the California Democratic Party in a landslide. On election night, Campa-Najjar finished second, with 18 percent of the vote to Hunter’s 47, enough to make it into the general. Republican Bill Wells finished third, just seven votes ahead of Butner, both with 13 percent.

Recently, Campa-Najjar’s former boss Barack Obama handed him an endorsement, and Sen. Elizabeth Warren, D-Mass., sent an email to her supporters Tuesday calling on them to give money to Campa-Najjar, linking his race against Hunter to her anti-corruption push. Alexandria Ocasio-Cortez, who beat Crowley in June, is also raising funds for Campa-Najjar.

In case you missed it in yesterday’s GOP bonanza,

My progressive brother candidate @ACampaNajjar is running against him.

Campa-Najjar told The Intercept that Wells, the Republican who finished in third place, called him after the indictment was announced and wished him luck, telling Campa-Najjar, “We should put country in front of party.” (Wells didn’t immediately respond to a request for comment.)

Campa-Najjar said that Hunter’s fall from grace was a sad case of Washington corrupting a once-good man. “The guy who served us abroad and fought, that man never came back,” he told The Intercept Wednesday. “He got engulfed by the ways of Washington, and he lost his way.”

He said that while the national party and the Democratic Congressional Campaign Committee may not have wanted him to win the primary, now that he’s the only candidate to take on Hunter, it’s time to unite. “I may not be the guy they wanted, but I’m the guy they got, and I’m the guy they need,” he said. “I don’t have to play by any set of rules. It’s gotten us to this point. I’m the best that you got, might as well try it out.” The DCCC has yet to add Campa-Najjar to its Red to Blue list, even after the Hunter indictment.

He doesn’t take the national party’s lack of interest in his campaign personally. “Part of it is deliberate, but a lot of it is unintentional. I’m not the profile that people think can win this race, and for people outside this district, I can’t blame them, they have no earthly idea what’s going on in this district. At any institution, the person at the top floor has no idea what’s going on downstairs,” he said.

Campa-Najjar may give Democrats one more seat in the effort to take back the House, but if so, he won’t be there to vote for Nancy Pelosi for speaker. “I think change is needed, and if you don’t believe it’s needed, its inevitable,” he said — adding that he’d like to see a woman replace her, possibly California Rep. Linda Sánchez, to combat the “toxic masculinity” that still predominates in the party.

As to whether he’d call himself a democratic socialist like his fellow Justice Democrat Ocasio-Cortez, Campa-Najjar demurred: “I don’t really care for labels. I spent my whole life being labeled, I have an irrational aversion to labels. These ideas are not that radical.”

Echoing a line Ocasio-Cortez made popular, he said, “Nobody in this country should die because they’re too poor to live.”

Correction: August 22, 2018, 5 p.m.
A previous version of this story stated that Ammar Campa-Najjar’s paternal grandfather died during the 1972 Munich terrorist attack. In fact, he was killed by Israeli forces in retaliation for the aforementioned attack. Also, this story has been updated to include that a hospital in the Gaza Strip that is named for Campa-Najjar’s grandfather was shelled by Israelis in 2014.