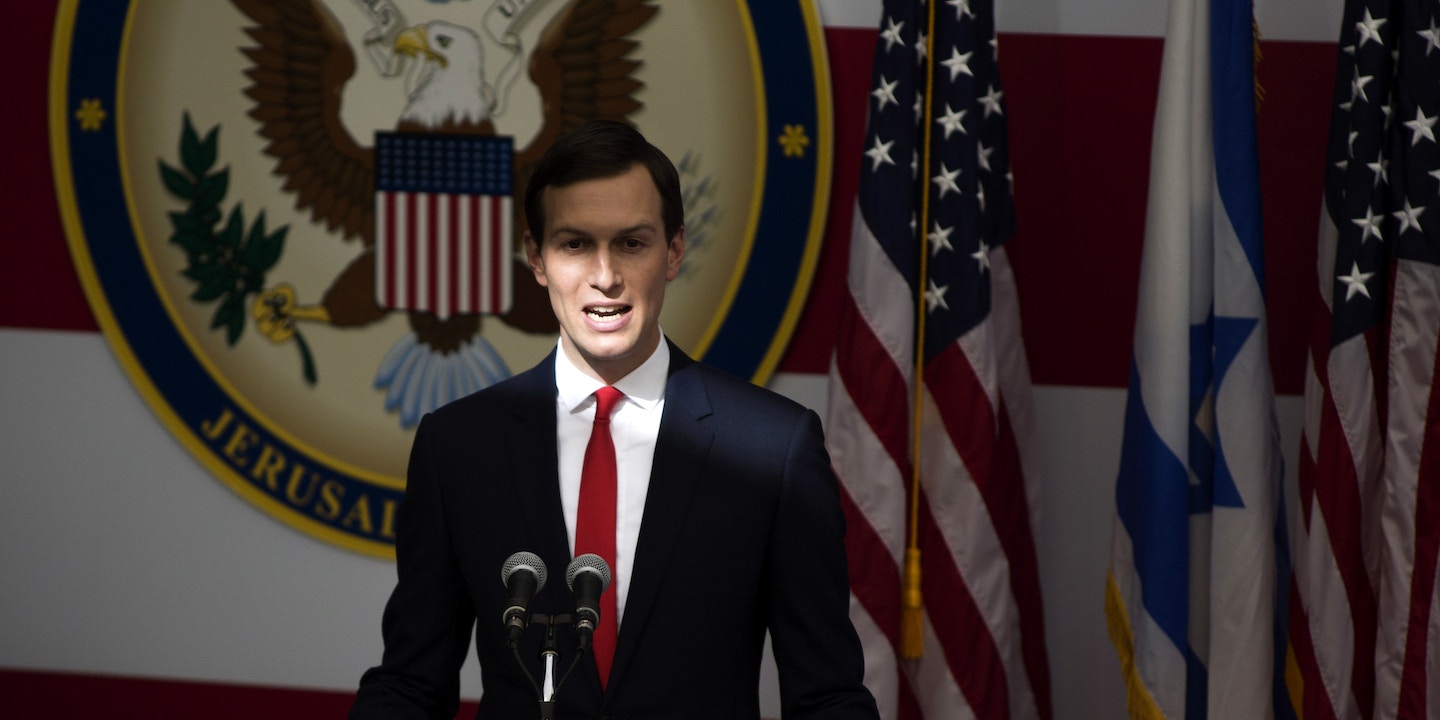 Jared Kushner has yet to formally unveil his highly touted peace plan for resolving the Israel-Palestine conflict. But in the past weeks and months, its outlines have become increasingly clear. Recent moves by the United States to recognize Israel’s capital in Jerusalem and deprive Palestinians of refugee status have taken key issues off the table before any future peace negotiation even begins. The Trump administration has announced a steady stream of cuts in aid for Palestinians, including reported plans to stop all funding for the United National Relief and Works Agency (UNRWA), the agency which provides healthcare and schooling for Palestinian refugees, as well as cutting $200 million in economic aid to the West Bank and Gaza. These moves are helping clarify the Trump administration’s strategy for getting to peace in the region: imposing maximum pain on the Palestinians as a means of bullying them into submission.

But this strategy may backfire, including against a Netanyahu government that has enthusiastically supported Trump’s get-tough approach. Even former Israeli military officials have begun raising the alarm that the Trump administration’s punitive actions against the Palestinians, rather than bringing peace, are leading the region toward a new era of conflict. In an article this week in Ha’aretz, former Israeli Defense Forces spokesperson Peter Lerner criticized the administration’s attempts to “blackmail” the Palestinians, stating that such a strategy would lead to a power vacuum in the West Bank, warning that “hardballing the Palestinian into submission is likely to blow up on Israel’s doorstep.” Lerner’s warning echoes previous reports from Israeli military officials that funding cuts are likely to lead to a humanitarian crisis and further unrest in the occupied territories.

The Trump administration’s unapologetically anti-Palestinian posture, famously symbolized this May by U.S. Ambassador to the United Nations Nikki Haley walking out of a U.N. Security Council meeting to avoid even hearing a speech by the Palestinian envoy, is in many ways something new in the history of the Israel-Palestine conflict. While the United States has never been seen as a neutral arbiter on the conflict — famously characterized as “Israel’s lawyer” even by U.S. officials who have taken part in negotiations — the Trump administration’s actions have risen to a new level of overt hostility to Palestinian claims. Going back to the administrations of Woodrow Wilson and Harry Truman, successive U.S. presidents have shown a willingness to downplay the right of self-determination for the Arab people living in Palestine, while supporting Israeli expansion.

But experts say that even weighed against this shabby historical standard, the Trump administration’s approach is unique for its single-minded focus on satisfying short-term Israeli goals and political constituencies in the U.S., even at the cost of U.S. interests.

“Past U.S. administrations were also slanted toward the Israelis, but what’s different today is that the usual mitigating factors in decision-making, such as American national security interests and the desire to at least appear even-handed, no longer seem to be present,” says Khaled Elgindy, a fellow in the Center for Middle East Policy at the Brookings Institute. “Instead we have domestic politics and ideology in their purest form dictating U.S. policy on this issue.”

A number of high-ranking U.S. officials have strong ideological ties to the Israeli right, including U.S. Ambassador David Friedman, who has been personally involved in the funding of West Bank settlements and whose appointment was even opposed by hundreds of U.S. rabbis in a public petition. Under Friedman, Kushner, and Trump adviser Jason Greenblatt, the administration has charged ahead with provocative actions like cutting critical aid for organizations working in Gaza and the West Bank, despite warnings even from pro-Israel organizations that these actions are setting the stage for unrest.

“Even Israeli military officials have weighed in against cutting aid to UNRWA, because they know that there are security implications on the ground to such a decision,” says Elgindy. “But this doesn’t seem to be a factor in the Trump administration’s thinking.”

Despite helping champion this effort to make life worse for the Palestinian people, Kushner has also, somewhat incongruously, held himself out to them as a peacemaker. In an interview published in Arabic with a Palestinian newspaper in June, Kushner claimed that “the prospects for peace are very much alive.” He also claimed that Palestinian leaders were refusing to negotiate with him due to the fear that “we will release our peace plan and the Palestinian people will actually like it because it will lead to new opportunities for them to have a much better life.”

In recent months, White House officials have suggested that they have plans to boost economic activity in the occupied territories as a means of helping woo ordinary Palestinians and hopefully reconciling them to the continued denial of their political rights and the loss of key interests like a capital in East Jerusalem and the return of refugees. This idea of an “economic peace” has long been promoted by Israeli officials as a way of sidestepping thornier political questions. Israel’s warming relationships with the Gulf Arab monarchies have also boosted the prospects for such an approach being tried, with states like the United Arab Emirates and Saudi Arabia reported as potentially bankrolling investments in the occupied territories.

But experts with experience in past negotiations between Israelis and the Palestinians say that, despite the hopes of Kushner and the Gulf Arab leaders, such a plan is unlikely to bear fruit.

“The idea behind an ‘economic peace’ is that if you keep people economically satisfied, they won’t demand their political rights,” says Diana Buttu, a political analyst based in Ramallah and former legal adviser to the Palestinian side during the Oslo peace process. “Such an idea is not going to work because this conflict is fundamentally about politics and human rights, not economics.”

Buttu adds that the Trump administration’s approach of favoring Israel while bullying the Palestinians into submission may achieve the short-term goal of pleasing the president’s supporters among Christian evangelicals and donors like Sheldon Adelson, but it is unlikely to win Palestinians cooperation with any peace plan. Such an approach may indeed backfire on the Israeli government in the long-term. Faced with a hostile U.S. administration, intransigent Israeli leadership and feckless local government in the West Bank and Gaza, the Palestinians may end up bypassing their own ineffectual leaders and fighting to achieve their rights directly. Grassroots movements like the Great Return March in Gaza, and protests in villages like Nabi Saleh, have suggested that the weakening of the Palestinian Authority and Hamas, along with the likely death of the two-state solution, may already be giving rise to new citizen-led movements engaged in direct action against the occupation.

“Palestinians have weathered a lot, but what they are feeling now is that their leadership is incapable of defending them from the Trumps of the world,” Buttu says. If such a dynamic accelerates, it could create a serious dilemma for the Israeli government. “If you looked at South Africa during in 1984, during what seemed like the worst of apartheid, no one would’ve thought that within 10 years that the country would have a black president and that it would be Mandela of all people.”

Top photo: Senior White House adviser Jared Kushner speaks onstage during the opening of the U.S. embassy in Jerusalem on May 14, 2018, in Jerusalem, Israel.