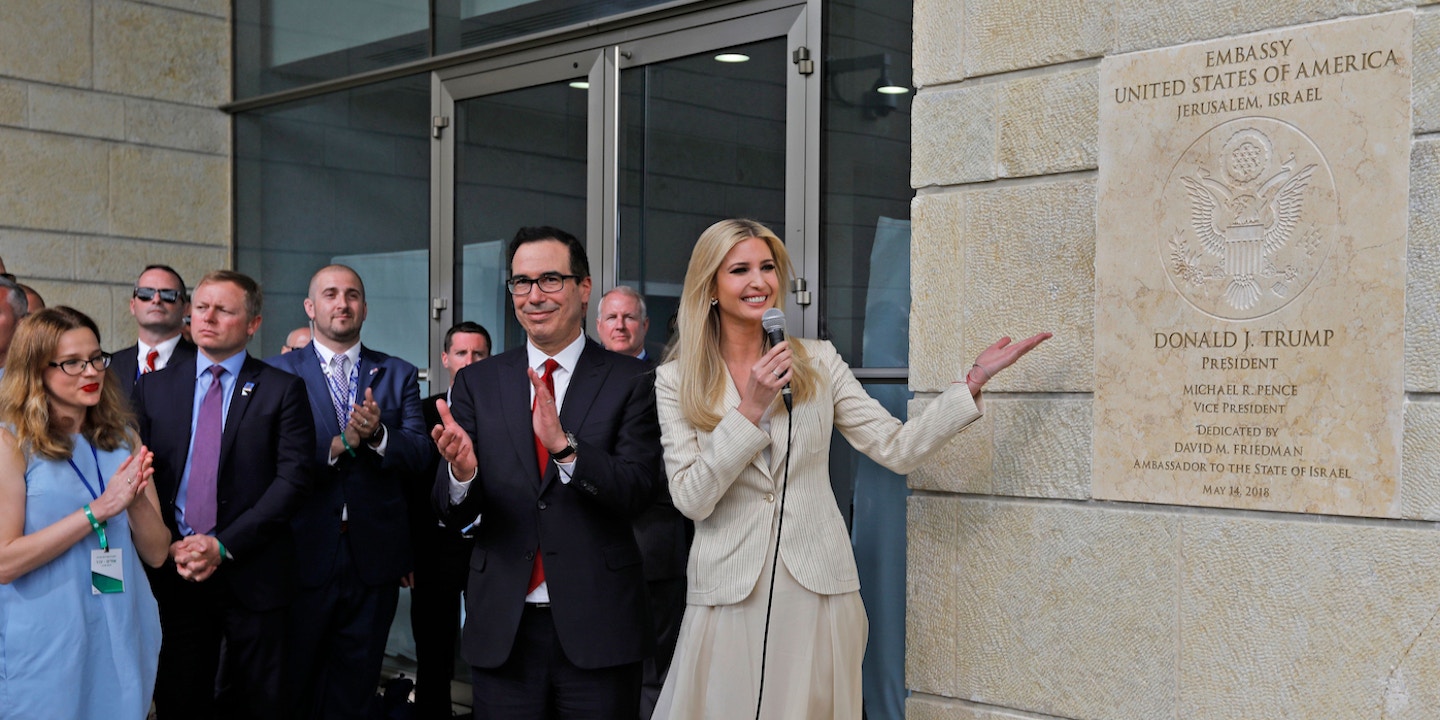 In a graphic demonstration of disregard for the lives and rights of Palestinians, a smiling Ivanka Trump welcomed Israeli dignitaries to the new U.S. Embassy in Jerusalem on Monday, while, just 60 miles away in Gaza, Israel’s armed forces shot hundreds of Palestinian protesters, killing at least 60.

Treasury Secretary @stevenmnuchin1 and Senior Advisor @IvankaTrump unveiled the U.S. #embassy in #Jerusalem, declaring the city, once again, the capital of #Israel: pic.twitter.com/XreXwUpQGs

(Pictures taken at the same time this afternoon) pic.twitter.com/0ySzaGjQC9

As American officials, including President Donald Trump’s former bankruptcy lawyer, Ambassador David Friedman, offered the new embassy to Israel as a sort of gift to celebrate the 70th anniversary of the founding of the Jewish state, thousands of Palestinians came under fire from Israeli snipers for demanding the right to return to homes that their families were forced to abandon in 1948.

There are 60 miles between Gaza and Jerusalem. An hour drive on a good road between a celebration and a massacre. This is not apathy, it is cruelty. pic.twitter.com/L3MKs5dPmt

Death toll in Gaza today rises to 52, over 2,400 wounded. At Shifa hospital a doctor who worked there for 17 years said he had never seen a day like this. pic.twitter.com/RZgDryzfUS

16-year-old Tallal Mattar has died of wounds sustained yesterday, according to health ministry. Death toll from Monday now at 60.

More than two-thirds of the Palestinians confined to Gaza are refugees from towns and cities in what is now Israel. The protests along Israel’s perimeter fence that began on March 30 — and were immediately met with lethal force — are intended to draw attention to what Palestinians refer to as the “nakba,” or catastrophe, of Israel’s founding, which led to the forcible displacement of some 750,000 Palestinians.

“Choosing a tragic day in Palestinian history shows great insensibility and disrespect for the core principles of the peace process,” said Palestinian Prime Minister Rami Hamdallah in a statement.

What a great day for the great American-Israeli alliance ????

The US president, everyone. Ululating the 1948 massacres by Haganah and Irgun Zionist forces and today allowing the continuation of it by not only rewarding Israel, but also saying it is okay to take lands if you slaughter enough people. #Palestine #Nakba70 https://t.co/0nZYrv4IID

The death toll on Monday means that Israel has now killed more than 90 Palestinians in the past six weeks for approaching the fence it placed around Gaza, surpassing the total number of East Germans shot and killed for trying to scale the Berlin Wall from 1961 to 1989.

As the Trump administration signaled its full embrace of the ultranationalist Israeli position, Palestinian-American activists suggested that news coverage of the massacre in Gaza was biased against the protesters.

When you talk about Palestinians "attempting to charge a fence" or "breach a border" in the context of Gaza you are accepting and normalizing the notion that they have no right to return to their homes.

Over 70% of the Palestinian population in Gaza are refugees. They live under Israeli occupation and siege. If they dare protest, they are executed by sniper fire. They are denied their right to return. The media normalizes their murder. Their simple struggle for freedom smeared

In remarks at the embassy ceremony, Trump’s son-in-law and novice peace envoy, Jared Kushner, blamed Palestinian protesters — not the Israeli snipers who gunned them down: “As we have seen from the protests of the last month and even today, those provoking violence are part of the problem and not part of the solution.”

Jared Kushner, Donald Trump's Middle East envoy and son-in-law, speaks at the new US embassy in Jerusalem, following protests in Gaza in which reportedly dozens of Palestinians were killed. pic.twitter.com/gVnjnRxZF0

Kushner also praised his father-in-law for keeping a campaign promise made to supporters of Israel.

Jared Kushner: “When President Trump makes a promise, he keeps it.” pic.twitter.com/VoMTeuYXHK

The sense that Trump had taken a major foreign policy decision mainly for domestic political reasons was underscored by the front-row seats awarded to Sheldon Adelson, a major donor to both his campaign and those of Israeli Prime Minister Benjamin Netanyahu.

Chief rabbis and cabinet ministers are seated in the row behind them. pic.twitter.com/jqg9RAX8so

At a party the night before the ceremony, Adelson and his Israeli-born wife, Miriam, described themselves as “euphoric” over Trump’s decision to effectively recognize Israel’s annexation of Jerusalem, which it seized by military force in 1967.

“This is a massacre of a stateless population living under military siege,” the Israeli-American writer Mairav Zonszein wrote in +972, a digital magazine with contributors in Israel and Palestine. “And we are all accomplices for not doing more to stop it.”

“The overwhelming majority of the Jewish Israeli population has not spoken out,” Zonszein added. “According to an Israel Democracy Institute Peace Index poll from April, 83 percent of Jewish Israelis find the IDF’s open fire policy in Gaza ‘appropriate.’ Just hours after the massacre, thousands went out into the streets to celebrate the Eurovision winner Netta Barzilai in Tel Aviv.”

This is Rabin Square, Tel Aviv, tonight. Tens of thousands gathered, not protest the killings in Gaza, but to celebrate Israel's #Eurovision victory.

In Jerusalem and Washington, hundreds of young Jewish activists from the groups If Not Now and All That’s Left did protest Trump’s decision to ignore Palestinian claims and move the U.S. embassy before the final status of the city has been negotiated.

For Immediate Release | ON THE DAY TRUMP MOVES AMERICAN EMBASSY TO JERUSALEM, AND DEADLIEST DAY FOR PALESTINIANS SINCE 2014, 150 YOUNG JEWS AND RABBINICAL STUDENTS SHUT DOWN BUSY D.C. INTERSECTION FOR TWO HOURS. #EmbassyOfFreedomhttps://t.co/vqgSpUxKh6 pic.twitter.com/8LHtoMCfID

The Israeli human rights group B’Tselem, which monitors conditions for Palestinians living under military rule in the territories Israel has occupied since 1967, denounced the killings. “The fact that live gunfire is once again the sole measure that the Israeli military is using in the field evinces appalling indifference towards human life on the part of senior Israeli government and military officials,” the group said in a statement. “B’Tselem calls for an immediate halt to the killing of Palestinian demonstrators. If the relevant officials do not issue an order to stop the lethal fire, the soldiers in the field must refuse to comply with these manifestly unlawful open-fire orders.”

As Palestinians in Gaza buried their dead and prepared to protest again on Tuesday, Daniel Seidemann, a Jerusalem peace activist, suggested that America’s full capitulation to Israeli extremists had dealt a further blow to dreams of a two-state solution to the conflict — making a single, binational state inevitable.

Infuriation and grief throughout Gaza and large number of funerals #Gaza pic.twitter.com/haoFoSF56P

This probably will sound pathetic, but my thoughts are not at the fetishistic embassy ceremony nearby, but with the residents of Gaza, and the families of those killed today.

The day will come when we will share this tortured land, even if I will not live to see it.

Updated: Tuesday, May 15, 6:27 a.m. EDT
This post was updated with a revised death toll as more Palestinians shot by Israeli snipers during protests on Monday died of their wounds.