The New York governor handed the upper chamber over to Republicans, and hired their staffers in return. 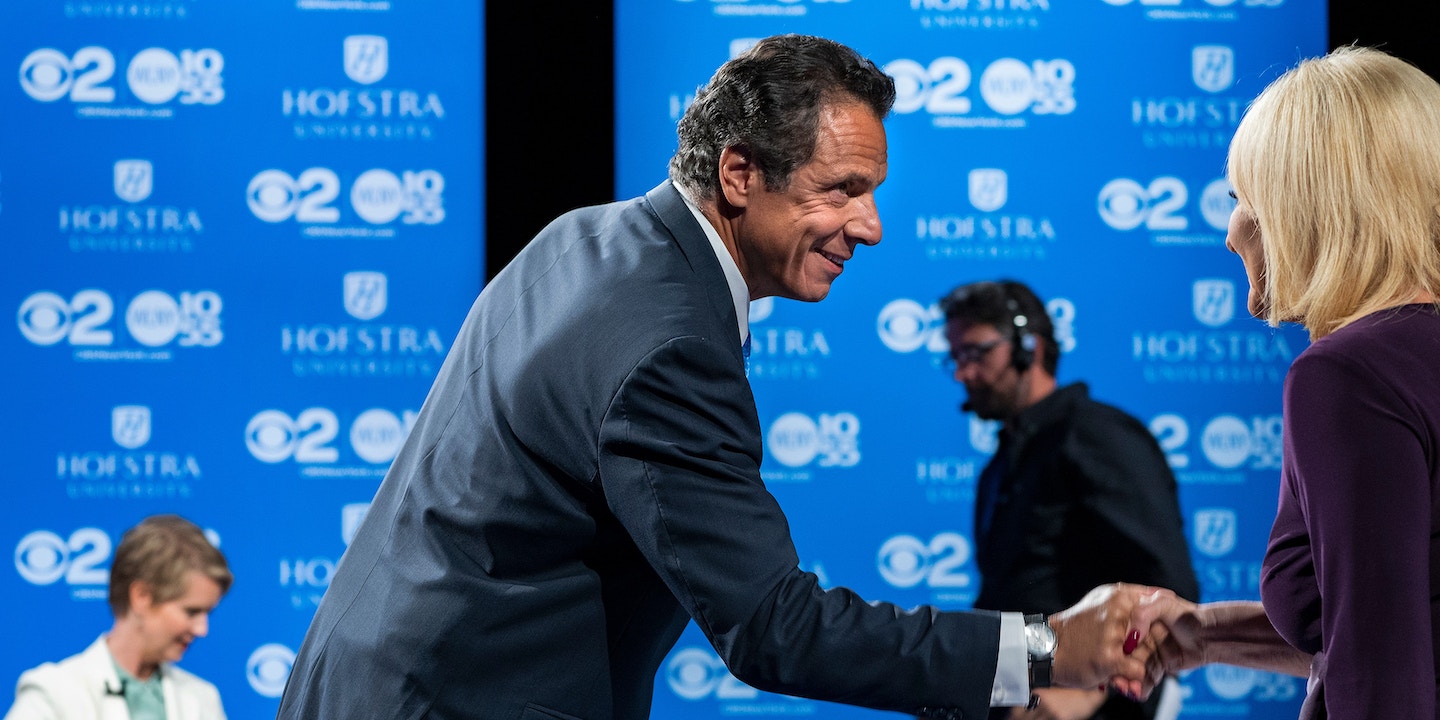 Pressure from Cynthia Nixon’s primary challenge has pushed New York Gov. Andrew Cuomo to the left on a number of issues ahead of this Thursday’s Democratic gubernatorial primary. Cuomo, though, has struggled to escape criticism for enabling the Independent Democratic Conference, a breakaway group of state Senate Democrats who caucused with the Republican minority to give them control of the chamber in a Democratic state. Notably, he only dissolved the alliance after Nixon’s entry to the race.

But his choice to hire numerous staff from across the aisle has gone largely unexamined.

Cuomo has repeatedly touted his ability to work across party lines, and judging by the number of Republicans he’s hired for key positions in his administration, he’s right.

In 2017, Cuomo hired a top aide to former New Jersey Gov. Chris Christie to be his chief of staff. Maria Comella, who worked on the 2004 George W. Bush campaign and the unsuccessful 2008 presidential campaigns of Rudy Giuliani and the late Sen. John McCain, helped “formulate the governor’s 2017 agenda” as an outside consultant, according to the New York Times.

In late 2016, Cuomo brought on Scott Sandman, who worked for over a decade as a staffer for Republican then-Gov. George Pataki, onto his team. In addition to his work for Pataki’s administration, Sandman also worked as a Senate Republican staffer.

Before hiring Sandman, Cuomo had already recruited two former aides for state Senate Republicans. He hired Robert Mujica, a top state Senate staffer, to be his budget director. And he appointed Kelly Cummings, who previously worked as the director of communications for Senate Republicans, to serve as his deputy chief of staff and senior adviser. Cuomo also hired veteran Republican consultant Susan Del Percio in 2014 as a special adviser, focusing on operations and special projects. Prior to joining the Cuomo administration, Del Percio had worked for Giuliani in his capacity as mayor of New York.

“Governor Cuomo slashed school funding in order to pay for tax cuts for the wealthy, and when you look at his staff, you hardly have to wonder why,” Nixon campaign spokesperson Lauren Hitt said in an email to The Intercept. “The Governor has surrounded himself with former top Republican staffers because, at his core, he simply is not a progressive. He’s allowed our subways and other infrastructure to rot, he’s sent out Donald Trump style campaign mailers to divide New Yorkers along religious lines, and – working with the IDC – he’s blocked critical progressive legislation like Medicare for All.”

The two-term incumbent still has a massive lead heading into the primary, a Siena College Research Institute poll found. He had a 41-point lead over Nixon, up from his 31-point lead from a poll conducted last month. Meanwhile, the Nixon campaign maintains that polls are not capturing on-the-ground energy. The poll also did not account for the pointed criticism Cuomo received over the weekend from publications like the New York Times and New York City Mayor Bill de Blasio regarding a Democratic Party mailer which strongly suggested that Nixon, whose wife and children are Jewish, is anti-Semitic. Cuomo claims he had no prior knowledge of the mailer, but while he has criticized its “tone,” he has not directly refuted its implications. He was also criticized for holding a ribbon-cutting ceremony where he drove across a stretch of the new Mario M. Cuomo Bridge before the originally planned opening date. A day after the event, engineers determined that a remaining piece of the old Tappan Zee bridge was in danger of collapsing.

Cuomo has received endorsements from former Vice President Joe Biden, Hillary Clinton, and essentially the entirety of the Democratic Party establishment; by contrast, grassroots groups like the Democratic Socialists of America and the Working Families Party are supporting Nixon, making this race fit the narrative of the intraparty war between centrists and an insurgent left. And after Alexandria Ocasio-Cortez’s upset victory, Cuomo isn’t taking any chances. His campaign has spent $8.5 million in the last three weeks, nearly 19 times as much as Nixon spent during the same period, and more than half of it went to TV advertisements.