Germany’s chief spy was removed from office for claiming that a viral video of nationalists hounding dark-skinned foreigners was fake. It was very real. 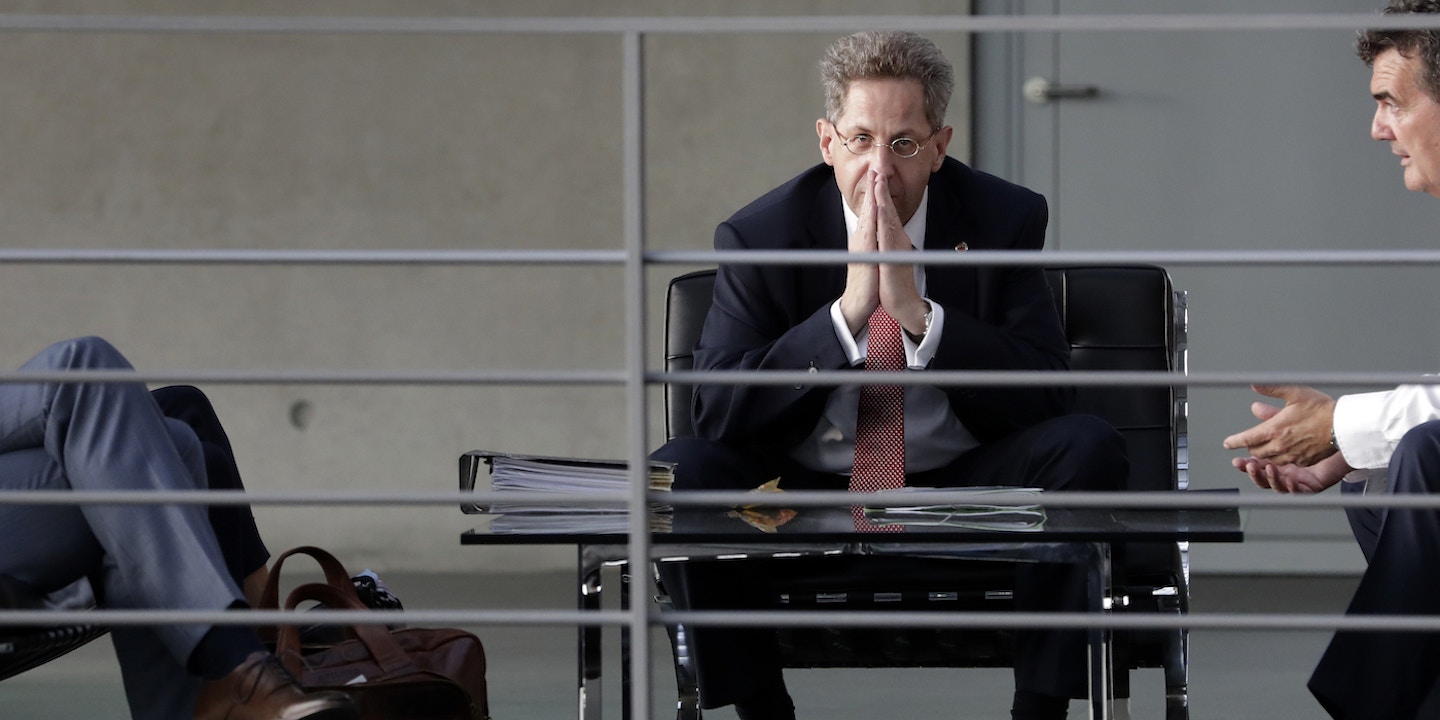 The man in charge of protecting German democracy from far-right extremism, domestic intelligence chief Hans-Georg Maassen, was removed from his position on Tuesday for suggesting that a left-wing group might have faked video evidence of an attack on foreigners.

To keep her coalition government intact, Chancellor Angela Merkel agreed to reassign Maassen, rather than fire him. Even though his new position, as a deputy minister, is technically a promotion, the compromise prevents Merkel’s conservative interior minister, Horst Seehofer, from quitting, while apparently satisfying a demand from the Social Democrat leader, Andrea Nahles, that a conspiracy theorist not oversee the monitoring of far-right extremists.

The video in question was recorded in the eastern German city of Chemnitz last month, when anti-immigrant protests spiraled into violence, following the fatal stabbing of a German man of Cuban heritage, and the arrest of two suspects from Iraq and Syria. (The Iraqi man was released on Tuesday, for lack of evidence linking him to the killing, but the Syrian remains in custody.)

It remains unclear who recorded the video — which has been viewed more than half a million times on social networks and was widely used in television reports — but it was posted on Facebook and Twitter by an anti-fascist group, Antifa Zeckenbiss, which added a caption describing it as foreigners being “hunted” by neo-Nazi hooligans.

Merkel told reporters that those images of nationalists chasing Afghan refugees in Chemnitz showed hatred from the anti-immigrant protesters and that they had persecuted innocent people. Two days later, Maassen contradicted her, telling Bild, Germany’s best-selling tabloid newspaper, that there was “no evidence to suggest that the video of this alleged incident circulating online is authentic.”

“The skepticism towards the media reports on right-wing extremist hunts in Chemnitz are shared by me,” Maassen told the newspaper. “Based on my cautious assessment,” he added, “there are good reasons to believe that this was intentional false information, possibly to detract attention from the murder in Chemnitz.”

The spy chief cited no evidence for his claim, which echoed far-right conspiracy theories, but it seemed to be in keeping with the current trend, from Berkeley to Berlin, in which those charged with protecting the public from extremists appear far more concerned with perceived threats from the far-left than violence by the far-right.

Within hours of the interview being published, Maassen’s conspiratorial musings were comprehensively debunked by German journalists who established that the video was indeed authentic.

Reporters for Zeit Online and its partner site Ze.tt used geolocation to find the precise spot in Chemnitz where the footage had been recorded; tracked down the two Afghan refugees seen in the footage, Alihassan Sarfaraz and Barin Afshar, and obtained footage shot by them that showed one of the men from the group that attacked them — a bald man in a florescent green shirt with a blue jacket around his waist — minutes before the assault.

The reporters then found another video clip, posted on Twitter within the same hour of the same evening, which showed some of the same far-right protesters — including the man in the green shirt — chasing other people from the same street.

Sarfaraz and Afshar told Till Eckert of Ze.tt that the video was recorded just after the German men had first attacked them, knocking one man’s phone from his hands, and punching their female friend in the face. The woman, who asked not to be identified, was hospitalized for 11 days after the attack. (The far-right riot had been prompted, in part, by a false rumor that the German man who was killed had been protecting a woman from harassment by foreigners.)

Four days later, the public broadcaster ZDF’s investigative news show Frontal 21 identified one of the attackers seen in the video as a security guard at a refugee camp in Chemnitz. Unlike Maassen, the guard was fired the same day by his employer, the private security company Securitas.

Frontal 21 also revealed that internal documents from the local police force in Chemnitz detailed multiple attempts by far-right extremists to attack foreigners and anti-fascist counter-demonstrators, further undermining Maassen’s claim that there had been no hounding of non-Germans.

At 9:42 p.m. that night, the police report obtained by Frontal 21 stated, “100 hooded persons” were “looking for foreigners.” Five minutes later, the police noted the advance of “20 to 30 masked persons armed with stones in the direction of Brühl, restaurant ‘Shalom.'” The attack on the Jewish restaurant by masked neo-Nazis — who pelted it with stones and bottles, injuring its owner, and shouted, “Get out of Germany, you Jewish swine” — horrified many Germans.

The far-right riot, which was accompanied by banned Hitler salutes and Nazi chants, also prompted demonstrations across Germany in favor of multicultural living and against the neo-Nazis.

I just accidentally walked by this anti Nazi protest in Bad Bentheim, a small town in Lower Saxony, featuring all major parties. When you see footage from Chemnitz, don’t forget this is happening, too, all over Germany. Ordinary people taking a stand against neonazism. pic.twitter.com/PJaARFvmNR

While Merkel’s decision not to simply fire Maassen was criticized by opposition leaders, the far-right Alternative for Germany party, known by the German acronym AfD, expressed relief that the intelligence chief would stay in government. An AfD leader, Alice Weide, praised Maassen as an internal critic of the chancellor’s decision to accept hundreds of thousands of mainly Muslim asylum-seekers in 2015. Maassen, a longtime member of Merkel’s conservative party, has made no secret of his opposition to the chancellor’s immigration policy, and has recently been accused of secretly advising the extremist AfD.

As the German weekly Spiegel reported, “Maassen has always been a hardliner when it comes to migration and laws pertaining to foreigners in the country.” The magazine noted that his 1997 Ph.D. dissertation, on the “Legal Status of Asylum-Seekers in International Law,” includes phrases and opinions commonly found on the far right. The study warned of “uncontrolled immigration” and “so-called asylum tourism,” and a possible increase in crime in multicultural societies. “The right of asylum in Europe these days,” Maassen wrote, “is primarily characterized by its abuse.”

The agency Maassen has led for six years, the Office for the Protection of the Constitution, known as the Verfassungsschutz, has long been accused of failing to properly monitor far-right extremism. Maassen’s predecessor, Heinz Fromm, was forced to resign in 2012 after it was revealed that the federal agency had destroyed documents on a neo-Nazi terror cell calling itself the National Socialist Underground, or NSU, which killed nine ethnic minorities, detonated two bombs in immigrant communities, killed a police officer, and carried out 15 armed robberies between 2000 and 2011 without being caught.

As The Intercept reported last year, the agency has never offered a convincing explanation for why one of those neo-Nazi murders, the killing of a son of Turkish immigrants in an internet cafe in the city of Kassel, took place despite the apparent presence of an agent from the state of Hesse’s Office for the Protection of the Constitution.

Top photo: Hans-Georg Maassen, center, head of the German Federal Office for the Protection of the Constitution, waits for the beginning of a hearing at the home affairs committee of the German federal parliament, Bundestag, in Berlin in Sept. 12, 2018.