So You Want to Use the 25th Amendment to Get Rid of Donald Trump? Here Are the Hurdles to Removing a Mentally Impaired President.

The Constitution offers few clues on how to evict a president who seems unhinged, yet retains the backing of his own enabling political party. 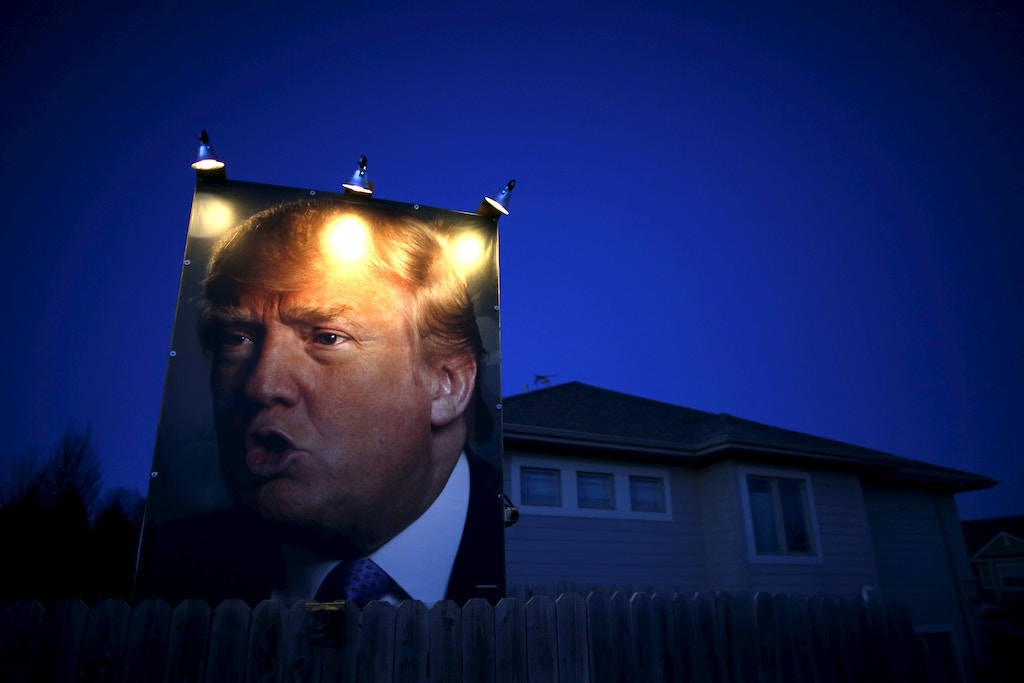 A picture of U.S. Republican presidential candidate Donald Trump hangs outside a house in West Des Moines, Iowa, on Jan. 15, 2016.

The evidence is mounting that President Donald Trump is unhinged, knocking the United States into an unforeseen crack in the constitutional framework. Our founding documents offer few clues on how to handle the scenario we now confront. The country is saddled with a president who is not just thoroughly corrupt but also appears to be mentally impaired — yet retains the backing of his own enabling party. This makes him nearly impervious to the nation’s traditional checks and balances.

Donald Trump is, of course many things: a racist, a liar, a vicious bully, and possibly a traitor. But alarming reports of Trump’s mental instability — one psychologist I spoke to called him “a psychopathic narcissist” who is “paranoid” and “has no loyalty to anybody” — have intensified the debate about what to do with a president who is unfit to hold the country’s highest office.

On Friday, the New York Times reported that Deputy Attorney General Rod Rosenstein talked in 2017 about recruiting members of Trump’s cabinet to invoke the 25th Amendment, which can be used to remove a president for being unfit. The report comes on the heels of an anonymous Times op-ed earlier this month in which a senior Trump administration official described meetings with the president that “veer off topic and off the rails” and the president’s penchant for “repetitive rants,” adding that Trump’s “impulsiveness results in half-baked, ill-informed and occasionally reckless decisions that have to be walked back.”

“Given the instability many witnessed, there were early whispers within the cabinet of invoking the 25th Amendment, which would start a complex process for removing the president,” the official wrote. “But no one wanted to precipitate a constitutional crisis.”

Of the three major processes through which Trump could be evicted from the White House — impeachment, indictment, or a determination of mental unfitness under the 25th Amendment to the Constitution — the last may be the Republic’s only hope. Today’s polarized politics and Republican strength in Congress would make impeachment nearly impossible, while longstanding Justice Department legal opinions may convince federal prosecutors that they can’t indict a sitting president.

Yet the 25th Amendment has never been used to remove a president, and the path to doing so is by no means clear.

The amendment was passed in 1967, in the wake of the succession problems created by the assassination of President John F. Kennedy in 1963. Vice President Lyndon Johnson became president following Kennedy’s death, but the vice presidency remained vacant. The 25th Amendment addressed that problem by directing that when the vice presidency is unfilled, the president can nominate someone who must then be confirmed by majorities of both the House and the Senate. That provision was first used when Vice President Spiro Agnew resigned in the face of corruption charges in 1973, and was replaced by Rep. Gerald Ford, who succeeded Richard Nixon as president the following year.

But the 25th Amendment went further, covering other succession scenarios on which the Constitution was also originally silent. For example, what should happen if it becomes clear that the president is medically or mentally impaired?

According to the amendment, if Vice President Mike Pence and a majority of Trump’s cabinet agree that Trump is mentally unfit for office, they can remove him and report their action to Congress. The amendment also includes a provision for what happens if the president fights back — a distinct possibility with Trump. If Trump resists leaving office, Pence and a majority of the cabinet would have four days to send a written declaration to the president pro tempore of the Senate — a position currently held by the longtime conservative Utah Senator Orrin Hatch — and House Speaker Paul Ryan. Congress would then have 48 hours to meet and consider the matter, and about three weeks to vote on it. A two-thirds vote would overturn the president’s protests and leave Pence in the White House. Anything less would put Trump back in power.

(Just imagine what would happen if Trump won that kind of constitutional showdown, fighting against his own vice president, cabinet, and Congress. He would be both increasingly paranoid and unstoppable.)

There’s also the question of the briefly mentioned and vaguely-defined “other body” in the 25th Amendment, which could be created by Congress to determine whether a president should be removed from office, taking over that role from the cabinet. Such a congressional creation could, in theory, move the decision over whether Trump should be removed from office farther from his own inner circle. (That cabal has already shown reluctance to follow through on the roadmap laid out in the 25th Amendment, according to the anonymous Times op-ed and Rosenstein, who disputed Friday’s report, saying: “Based on my personal dealings with the president, there is no basis to invoke the 25th Amendment.”)

As for the “other body” mentioned in the amendment, no such thing has ever existed, and the Constitution offers little guidance on how exactly Congress should step in to remove an unfit president. Since Trump took office, some prominent mental health professionals have urged Congress to step up and create a system that would include the mental and medical evaluation of a president. “Over the years, Congress has abdicated its responsibility and authority to set criteria and processes for presidential evaluation,” Dr. Paul Summergrad, a former president of the American Psychiatric Association, and Dr. Stephen Xenakis, a retired brigadier general who served in the Army Medical Corps, wrote in the Boston Globe in January.

Congress, they added, now has “the obligation to legislate the processes that will be used to assess, advise, and act on presidential inability, including, when needed, the informed opinions of consulting physicians.”

But there is yet another obstacle to ousting a mentally impaired president, one that is not embedded in the Constitution or American law. Instead, it is a professional guideline that the nation’s psychiatrists have imposed on themselves. It is called the Goldwater rule, and it prohibits psychiatrists from giving their professional opinions on political leaders from afar.

The rule dates back to the 1964 presidential campaign, when Fact Magazine, a small publication run by journalist and activist Ralph Ginzburg, surveyed American psychiatrists and asked them about the mental health of Republican presidential nominee Barry Goldwater, who was widely considered to be a right-wing extremist. The magazine published many of the responses, under the headline “1,189 Psychiatrists say Goldwater is Psychologically Unfit to be President!” After Goldwater lost the election, he sued the magazine for libel.

The American Psychiatric Association was horrified by the article, and in 1973 imposed the Goldwater rule, which states that it is unethical for a psychiatrist to offer a professional opinion about the mental health of a political leader, unless that psychiatrist has personally examined the person and has that person’s authorization to speak publicly.

“On occasion psychiatrists are asked for an opinion about an individual who is in the light of public attention or who has disclosed information about himself/herself through public media,” the rule states. “In such circumstances, a psychiatrist may share with the public his or her expertise about psychiatric issues in general. However, it is unethical for a psychiatrist to offer a professional opinion unless he or she has conducted an examination and has been granted proper authorization for such a statement.”

The Goldwater rule acts as an obstacle to triggering the 25th Amendment because it muzzles mental health professionals when their voices are most critical to the public debate. As a result, some psychiatrists are only willing to discuss their concerns about Trump’s mental condition anonymously, while others have rebelled against the rule, arguing that it is too restrictive and is preventing psychiatrists from stating what some say is both obvious and important — that Trump is mentally impaired.

One of the resistors is Dr. Bandy X. Lee of Yale University, who argues that mental health professionals have a duty to discuss Trump’s mental state, calling it a public safety issue. Although she says that she resigned from the APA about a decade ago because of its ties to pharmaceutical companies, Lee said she agrees with its directive to mental health practitioners not to diagnose Trump or other political leaders they haven’t personally examined.

But she says the Goldwater rule goes too far, and that her public statements — she helped organize a conference about Trump’s mental state last year, which gave rise to a best-selling book — qualify as “a mental health assessment” rather than a “formal diagnosis.”

Trump has shown “impulsivity, recklessness, lack of empathy, cruelty, and finding pleasure in humiliating or causing harm to others,” Lee told me. He has also shown “a lack of regard for the consequences of his actions, a need to burnish his power, a bizarre relationship with reality, and an inability to cope with criticism.” Those symptoms suggest “signs of psychological abnormality,” she said. “They have nothing to do with his political stance. They have to do with psychological impairment.”

Not long after Lee’s book, “The Dangerous Case of Donald Trump: 27 Psychiatrists and Mental Health Experts Assess a President,” was published in October 2017, she received two phone calls from “exceptionally genteel and well-informed members of the White House,” she recalled. “They were calling me because they were alarmed, one of them scared, by the behavior of the president. They said he was mentally unraveling.”

Lee said the calls came just after Special Counsel Robert Mueller issued the first indictments in the Trump-Russia probe. They came on the same day from different people. She didn’t ask the callers their names or press them for any further information beyond what they initially shared because she did not want to become bound by doctor-patient confidentiality, she said. Instead, she recommended to both callers that they contact the emergency room at George Washington University Hospital, which is near the White House.

Curious about whether the calls were genuine — both had come from the same number — she dialed it back. It turned out to be the main number for the White House switchboard. She later called the emergency room at GW and spoke with a psychiatrist on duty in an attempt to learn whether either of the two people from the White House had contacted the hospital. The psychiatrist on duty refused to provide her with any information, so Lee doesn’t know whether anyone from the White House took any further action. Indeed, it seems clear that no one has yet figured out how to repair the breach in our system that has left us with Trump.