Honoring the victims of Hurricane Maria begins with telling the truth. Long before that storm, Puerto Rico was a textbook example of disaster capitalism. 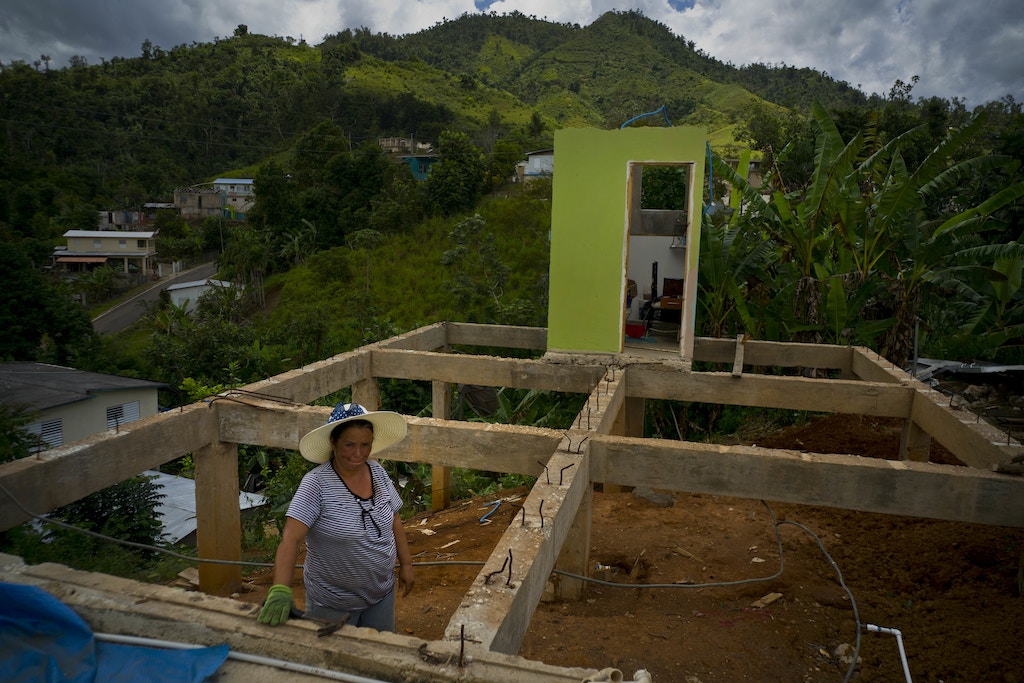 Alma Morales Rosario poses for a portrait between the beams of her home being rebuilt after it was destroyed by Hurricane Maria one year ago in the San Lorenzo neighborhood of Morovis, Puerto Rico, on Sept. 8, 2018.

I’ve been digging into disaster capitalism for a couple of decades now. For those of you who are new to the term, disaster capitalism is about how the already rich and powerful systematically exploit the pain and the trauma of collective shocks — like superstorms or economic crisis — in order to build an even more unequal and undemocratic society.

Long before Hurricane Maria, Puerto Rico was a textbook example. Before those fierce winds came, the debt — illegitimate and much of it illegal — was the excuse used to ram through a brutal program of economic suffering, what the great Argentine author Rodolfo Walsh, writing about four decades earlier, famously called miseria planificada, planned misery.

This program systematically attacked the very glue that holds a society together: all levels of education, health care, the electricity and water systems, transit systems, communication networks, and more.

It was a plan so widely rejected that no elected representatives could be trusted to carry it out. Which is why in 2016 the U.S. Congress passed the Puerto Rico Oversight, Management, and Economic Stability Act, known as PROMESA. That law amounted to a financial coup d’etat that put Puerto Rico’s economy directly in the hands of the unelected Financial Oversight and Management Board. In Puerto Rico, they call it La Junta.

The term fits. As Greece’s former Foreign Minister Yanis Varoufakis puts it, governments used to be overthrown with tanks — now it’s with banks.

It was in this context — with every Puerto Rican institution already trembling from La Junta’s assaults — that Maria’s ferocious winds came roaring through. It was a storm so powerful it would have sent even the sturdiest society reeling. But Puerto Rico didn’t just reel. Puerto Rico broke.

Not the people of Puerto Rico, but all those systems that had already been deliberately brought to the brink: power, health, water, communication, food. All those systems collapsed. And let us be clear: It was that combination of disaster capitalism and an extraordinary hurricane that stole so many precious lives.

A few lives were lost to wind and water, yes, but the vast majority died because when you systematically starve and neglect the very bones of a society, rendering it dysfunctional on a good day, such a society has absolutely no capacity to weather a true crisis.

That is what the research tells us, those studies Donald Trump so casually denies: The major causes of death were people being unable to plug in medical equipment because the electricity grid was down for months; health networks so diminished they were unable to provide medicine for treatable diseases. People died because they were left to drink contaminated water because of a legacy of environmental racism. People died because they were abandoned and left without hope for so long that suicide seemed the only option.

Those deaths were not the result of an unprecedented “natural disaster” or even “an act of God,” as we so often hear.

Honoring the dead begins with telling the truth. And the truth is that there is nothing natural about this disaster. And if you believe in God, leave her out of this too.

God isn’t the one who laid off thousands of skilled electrical workers in the years before the storm, or who failed to maintain the grid with basic repairs. The fatal logic of economic austerity did that. God didn’t give vital relief and reconstruction contracts to politically connected firms, some of whom didn’t even pretend to do their jobs. God didn’t decide that Puerto Rico should import 85 percent of its food — this archipelago blessed with some of the most fertile soil in the world. God didn’t decide Puerto Rico should get 98 percent of its energy from imported fossil fuels — these islands bathed in sun, lashed by wind, and surrounded by waves, all of which could provide cheap and clean renewable power to spare.

These were decisions made by people working for powerful interests.

Because for 500 uninterrupted years, the role of Puerto Rico and Puerto Ricans in the world economy has been to make other people rich, whether by extracting cheap labor or cheap resources or by being a captive market for imported food and fuel.

A colonial economy by definition is a dependent economy. A centralized lopsided and distorted economy. And as we have seen, an intensely vulnerable economy.

And it isn’t even right to call the storm itself a “natural disaster.” None of these record-breaking storms are natural anymore — Irma and Maria, Katrina and Sandy, Haiyan and Harvey, and now Florence and Mangkhut, which battered parts of Asia this week.

The reason we are seeing records shattered time after time is that the oceans are warmer and the tides are higher. And that’s not God’s fault either. It’s the fault of governments protecting the interests of the fossil fuel companies and agribusiness giants that pay for their campaigns. Victims of Hurricane Maria carry supplies brought to them via helicopter by the Puerto Rican National Guard at Morovis, Puerto Rico, on Oct. 7, 2017.

This is the deadly cocktail — not just a storm, but a storm supercharged by climate change slamming headlong into a society deliberately weakened by a decade of unrelenting austerity layered on top of centuries of colonial extraction, with a relief effort overseen by a government that makes no effort to disguise its white supremacy.

Maria just blew so hard she tore all the genteel disguises off these brutal systems, leaving them stark naked for the world to see. The hurricane and FEMA’s endless failures pushed Puerto Rico over the edge. But we have to talk about why Puerto Rico was teetering so precariously on the precipice in the first place.

We also need to stop talking about incompetence. Because if it were incompetence, there would be some effort to fix the underlying failures. To rebuild the public sphere, design a more secure food and energy system, and stop the carbon pollution that guarantees even more ferocious storms in the coming decades.

Yet we have seen the precise opposite. We have seen nothing but more disaster capitalism — using the trauma of the storm to push massive cuts to education, hundreds of school closures, wave after wave of home foreclosures, and the privatization of some of Puerto Rico’s most valuable assets.

Such is the official  response to this modern-day catastrophe: Do everything possible to make sure that it will happen again and again. Do everything possible to bring on a future in which climate disasters arrive so fast and so furious that even gathering together to mourn the dead on painful anniversaries could, for our children, come to seem like an unattainable luxury. They will already be in the throes of the next emergency, like people in the Carolinas, Kerala, and the Philippines are right now.

That is why dozens of Puerto Rican organizations, under the banner of JunteGente, are standing together to demand a different future. Not just a little bit better but radically better. Their message is a clear one: that this storm must be a wakeup call, a historic catalyst for a just recovery and just transition to the next economy. Right now.

That begins with auditing and ultimately erasing an illegal debt, and firing La Junta because its very existence is an affront to the most basic principles of self-government. Only then will there be the political space to redesign the food, energy, housing, and transportation systems that failed so many — and replace them with institutions that truly serve the Puerto Rican people.

This movement for a just recovery draws on local brilliance and protected knowledge to make the most of the richness of the soil, as well as the power of the sun and wind.

Today I am reminded of the words of Dalma Cartagena, one of the great leaders of Puerto Rico’s agro-ecology movement: “Maria hit us hard. But it made our convictions stronger. Made us know the correct path.”

The era of planned misery and deliberately designed dependence is over. It’s time to plan for joy and design for liberation. So that when the next storm comes — and it will — the winds will roar and the trees will bend, but Puerto Rico will show the world that it can never be broken.

This is an extended version of remarks given September 20 at “One Year Since Maria,” a rally in Union Square Park in New York City, organized by UPROSE and #OurPowerPRnyc.