Under the banner of a “just recovery” for Puerto Rico, thousands have come together to design a bold and holistic plan for the island to be rebuilt. 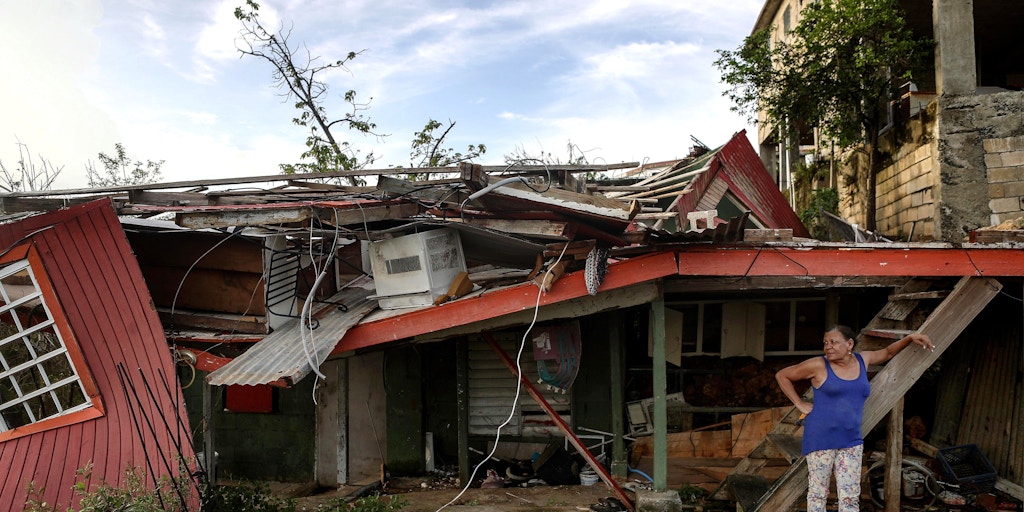 Gladys Francisco stands in front of her destroyed home in a neighborhood still without grid electricity or running water on Oct. 17, 2017 in San Isidro, Puerto Rico.

It’s tough to shock Puerto Ricans. Not after the presidential paper-towel toss. Not after Donald Trump repeatedly attacked San Juan’s mayor for daring to fight for her people’s lives. Not after he threatened to skip out on the island in its hour of need at the earliest excuse.

Still, the fact that the House-approved relief package contains $5 billion in loans for the island, rather than grants, is a special kind of cruelty. Because on an island already suffering under an un-payable $74 billion debt (and another $49 billion in unfunded pension obligations), Puerto Ricans understand all too well that debt is not relief. On the contrary, it is a potent tool of perpetual impoverishment and control from which relief is urgently needed.

The very fact that the House of Representatives bundled that loan into its sweeping multi-disaster bill (up for a vote in the Senate any day now) is symbolic of a deep fear that has lurked in the background for many Puerto Ricans ever since hurricanes Irma and Maria struck. The fear is that however much islanders are suffering in the midst of their ongoing humanitarian emergency, it’s the phase after the emergency passes that could be even more perilous. That’s when policies marketed as reconstruction could well morph into their own kind of punishment, leaving the island more unequal, indebted, dependent, and polluted than it was before the hurricanes hit.

This is a phenomenon we call “the shock doctrine,” and we have seen it play out many times before. A disaster strikes, public sympathy is awakened, and there are grand pledges to “build back better,” bringing justice to those who have just lost everything. And yet almost immediately the emergency atmosphere becomes the pretext to push through a wish list for big polluters, real estate developers, and financiers at the expense of those who have already lost so much. Think of the public schools and public housing closed and torn down in New Orleans after Hurricane Katrina. Think, too, of the way the 2010 earthquake in Haiti became a pretext to push for sweatshops and luxury resorts, while basic housing was neglected and the minimum wage was suppressed.

If there is some good news, it’s this: Puerto Ricans are wise to shock doctrine tactics. They know all too well that their island’s debt crisis, fueled by Wall Street’s hunger for tax-exempt bonds, was systematically exploited to extract brutal “reforms” from workers and students who played no part in driving up the debt. They know that the debt crisis was used to strip Puerto Ricans of their most basic democratic rights, putting the island’s finances in the hands of an unelected Financial Oversight and Management Board — referred to locally as “La Junta.”

Which is why, as soon as hurricanes Irma and Maria struck, many Puerto Ricans were on the lookout for how these shocks would be exploited for private gain. The destroyed electricity grid would be seized upon to argue that the whole system should be privatized, while the destroyed homes would be the opening to auction off more land for golf courses and vacation homes. 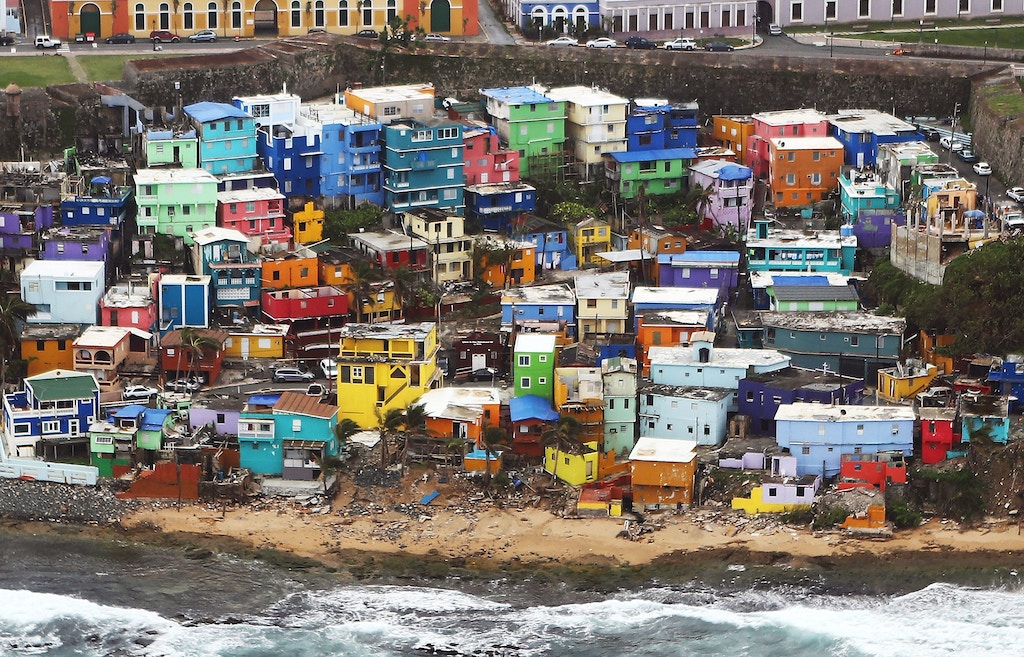 The damaged La Perla neighborhood is viewed from the air during recovery efforts four weeks after Hurricane Maria struck on Oct. 18, 2017, in-flight over Puerto Rico.

Except here’s the thing: Disaster capitalists may be circling Puerto Rico, but this time they may not get their prey. Why? Because Puerto Ricans — both on the island and the mainland — are fighting back in real time.

Under the banner of a “just recovery” for Puerto Rico, thousands have come together to design a bold and holistic plan for the island to be rebuilt as a beacon for a safe, resilient, and thriving society in the era of accelerating climate chaos, spiraling economic inequality, and rising white nationalism.

From the earliest days of this emergency and despite enormous communication and logistical challenges, Puerto Ricans in the diaspora have worked with partners on the island to sketch out the core principles and policies of the plan. The work is rooted in the belief that the underlying reason behind all of Puerto Rico’s intersecting crises is the fact that the island’s people and land have been treated like a bottomless raw resource for the mainland to mine for over a century, never mind the devastating economic consequences. Interestingly, the global climate crisis — which is now hitting Puerto Rico with disproportionate fury — comes from a strikingly similar logic: For centuries, industrial societies have been extracting and burning fossil fuels as if there would never be any ecological consequence for our actions. We were badly mistaken.

A justice-based recovery would seek to replace these extractive strategies with relationships based on principles of reciprocity and regeneration. In the short term, that means meaningful debt relief, as well as a waiver and full review of the Jones Act, the shipping law that requires that all goods entering Puerto Rico from the mainland arrive via U.S. ships, dramatically driving up costs and limiting options. It also means that, whenever possible, aid money should go directly to Puerto Rican organizations and communities because it’s not only bankers and shipping companies that extract wealth from poor communities. So, too, can well-meaning aid organizations, which have transformed far too many disaster zones into playgrounds for the non-profit industrial complex. It’s a process that siphons vast sums of money into overhead, hotels, and translators; drives up local prices; and casts affected populations as passive supplicants rather than participants in their own recovery. For a just recovery to be possible, this story cannot be allowed to repeat. 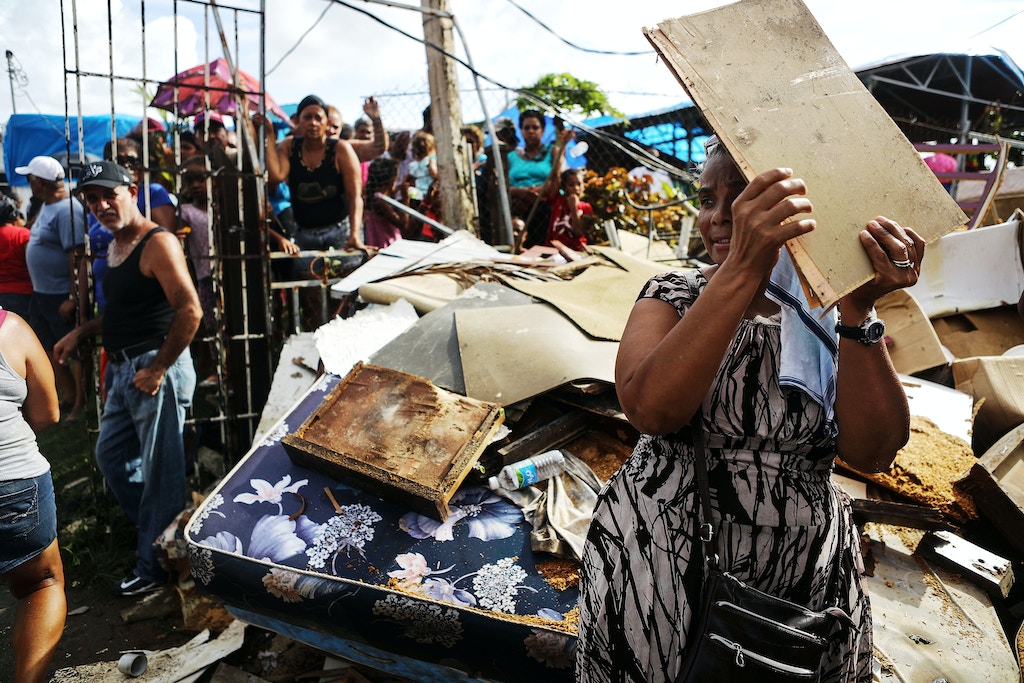 A woman shields her face from the sun with a piece of wood, as residents wait to receive food and water, provided by FEMA, in a neighborhood without grid electricity or running water on Oct. 17, 2017 in San Isidro, Puerto Rico.

And yet, these are only the preconditions for the real work, which is not reconstructing the island as it was, but reimagining and remaking an economic system that was in direct conflict with both the island’s people and its ecology. Before Irma and Maria knocked out the vast majority of its electricity, Puerto Rico was getting 98 percent of its power from fossil fuels. A just transition would replace that extractive model with a system based on micro-grids of renewable energy generation, a decentralized network that would be more resilient in the face of inevitable weather shocks, while reducing the pollution making our climate go haywire in the first place.

This energy transition is already underway in grassroots relief efforts, thanks to innovative projects, like Resilient Power Puerto Rico, which has been distributing solar-powered generators to some of the most remote parts of the island. The organizers are working toward a full-blown, permanent solar revolution designed and controlled by Puerto Ricans themselves. “Rather than perpetuate the island’s dependence on vulnerable distribution hardware and carbon-heavy fuel,” Resilient Power explains on its website, “we prioritize clean production of energy that allows each household to be self-reliant.”

Many of the island’s farmers are demanding a similar revolution in agriculture. Farmers report that Maria destroyed almost all of this season’s crops while contaminating much of the soil, providing yet another opportunity to reimagine a system that was broken before the storm. Today, far too much of Puerto Rico’s fertile land goes uncultivated, leading islanders to import roughly 80 percent of their food. Before the hurricanes, there was a growing movement to break this cycle by reviving local agriculture through farming methods, such as “agroecology,” that draw on both indigenous knowledge and modern technology (and include the added bonus of carbon sequestration).

Farmers’ groups are now calling for the proliferation of community-controlled agricultural cooperatives that would grow food for local consumption. Like the renewable energy micro-grids, it’s a model that is far less vulnerable to supply-chain shocks like hurricanes — and it has the additional benefit of generating local wealth and increasing self-sufficiency.

As with the solar-powered generators, Puerto Rico’s farmers aren’t waiting for the emergency to subside before beginning this transition. On the contrary, groups like Boricuá Organization for Ecological Agriculture have “agroecology brigades” traveling from community to community to deliver seeds and soil so that residents can begin planting crops immediately. Katia Avilés-Vázquez, one of Boricuá’s farmers, said of a recent brigade: “Today I saw the Puerto Rico that I dream being born. This week I worked with those who are giving it birth.”

That experience is at the heart a just recovery for Puerto Rico. It’s a vision for an island where people are not saved by benevolent outsiders, but are given the tools to become true partners and save themselves. An island where the people of Puerto Rico transition rapidly to renewable power — and claim their full political power at the same time.

Puerto Ricans are hard to shock, but the island may be on the verge of shocking the world by seizing a crisis of unimaginable hardship to forge an inspiring new model of economic development.

Elizabeth Yeampierre is the executive director of UPROSE and co-chair of the Climate Justice Alliance. Naomi Klein is the author, most recently, of “No Is Not Enough: Resisting Trump’s Shock Politics and Winning the World We Need.”