This Blessed Plot: Art Untangles Conspiracy at the Met Breuer

A major exhibition in New York looks to art as a method to understand how power really works. Mark Lombardi would have had a field day. If the American conceptual artist, who took his own life in 2000, had lived a little longer, he would have witnessed Bush versus Gore, with its lawyer armies and hanging chads; and of course the September 11 attacks and launch of the so-called war on terror, which would have fed even further his obsessional interest in the nefarious networks that structure our lives.

Scouring the newspapers to document the plots of his time — the savings and loan scandal, Whitewater, the Vatican bank — and filling thousands of index cards, Lombardi produced large, elegant drawings, all circles and arced lines, with precise notations in red and black pencil. It was data art for the late-analog age, literally connecting the dots: who transacted with whom, who was linked by hierarchy or common allegiance. In part, his geometries were clarifying. Yet in their scale and complexity, they also conceded a constellational mystery — the sense that we can never know it all.

Law enforcement, for one, thought the artist’s view might prove handy. After 9/11, an FBI agent visited the Whitney Museum to look at Lombardi’s work; something similar happened at a show of his works at the Drawing Center in 2003. Investigators must constantly toggle between the forest and the trees. Art offers something potentially useful that destabilizes that dialectic: an expressive path toward truth.

That potential energizes “Everything Is Connected: Art and Conspiracy,” apparently the first major museum show to scrutinize this theme, which has opened at the Met Breuer in New York City. The exhibit gathers 83 works by 30 artists since the late 1960s — in painting, drawing, installation, video — to ask with regard to such topics as multinational corporations, Henry Kissinger, or the Afghan War, that nagging query: What’s really going on?

Greeting the visitor are two huge monochromes by Wayne Gonzales, “Peach Oswald” (2001) and “Dallas Police” (1999) — portraits of Lee Harvey Oswald, who shot John F. Kennedy, and Jack Ruby, who shot Oswald. In acrylic shades of pink and bright green, each leads the viewer to the eyes: Oswald’s sly and wary, Ruby’s frozen and blank. The implicit question: What are they not telling us? The JFK assassination is a primal unknown in American culture. It’s the conspiracy that we need to be a conspiracy, whether or not we really believe that the facts are in doubt. It also feels quaint at this point. Turn the corner and you find Lombardi’s “BCCI-ICIC & FAB, 1972-91 (4th Version).” It is a vast diagram of the Bank of Credit and Commerce International scandal of the late 1980s, which revealed a tentacular money-laundering machine that connected everyone from U.S. military brass to arms dealers, dictators, and international crooks of all stripes. You don’t need to know that one of the top prosecutors was a certain Robert Mueller to jump to the present, and wish Lombardi were here to offer his visual take on Trumpworld and the Russia investigation. His method might help us grasp the facts, but even more so, the cultural charge, the meaning of it all.

The exhibition draws a distinction between “conspiracy” and “conspiracy theory.” Its purview is the former — that is, opaque but ultimately documentable systems of power, which artists contribute to bring to light. It extends the scope to works that, as the wall text puts it, “plunge down the rabbit hole, where facts and fantasy freely intermingle.” But it does so with a bias toward the “fever dreams of the disaffected,” whose intuitions often prove correct. Thus the view, held by Black Panthers and the white counterculture in the late 1960s, that the government was flooding their communities with drugs: There was at least some truth to that. Or mind-control experiments by the CIA — again, things of that ilk did happen.

What is excluded is the wholly toxic: art that traffics, say, in anti-Semitism, or the contemporary madness of QAnon or Pizzagate. Disciples of the latter might see this choice as further evidence of establishment bias against them — more “fake news.” That seems a risk worth taking. We don’t need more bigotry in the public space, even for educational use. The exhibition’s curatorial politics are more liberal than radical, as is the slice of the art world it presents: Conceptualists and experimentalists of the late 20th century, mostly male, mostly white, heavy on New York and Los Angeles. There is a nod to Black liberation, though ensconced in the past, with a series of Black Panther prints by Emory Douglas and a film interview with Fred Hampton made shortly before the police killed him. Powerful in their own right, these artifacts weave awkwardly into the show, lacking context. More effective is the inclusion of Alfredo Jaar’s phenomenal, anti-imperialist “Searching for K” (1984), in which the Chilean artist, fixating on Henry Kissinger, assembles press photos and documents that convey Kissinger’s constant presence in the shadows of American foreign policy malfeasance.

A series by Sarah Charlesworth takes one news image — the Polaroid that the Red Brigades made of their hostage, Italy’s prime minister, Aldo Moro, in April 1978 — and reproduces the front pages of newspapers around the world with the text removed, so that only that photo, and any other photos that happened to run that day, remained. Moro holds up the day’s issue of La Repubblica, an Italian daily, which the kidnappers had him show to prove he was alive. (They would later kill him.) Charlesworth made the work that same year: It seems to address less conspiracy per se than the multiple roles that the media play as agent of historical events. But it adds to the exhibition’s strength: another instance of art as investigation, through the application of an oblique forensic strategy.

The American Conceptual artist Mike Kelley turned the forensics on himself and the environments that conditioned him. In “Abuse Report” (1995/2007), he took a bureaucratic form used to report the suspicion of child abuse and wrote himself as the abused child, casting the Abstract Expressionist painter Hans Hofmann, whom he viewed as an influence, as the abuser. The suspected harms are absurd: “Brainwashed into a cult,” “He dug up his own grave to retrieve those lost poems …” In the sculpture “Educational Complex” (1995), Kelley reacted to cases in which social workers were found to have egged children on to false accusations of day care sex abuse, by combining models, from his own imperfect memory, of all his homes and schools from childhood to CalArts. Kelley was interested in other artists’ work on conspiracy. He put forward the theme for exhibitions as early as 1991; the Met Breuer curators, Douglas Eklund and Ian Alteveer, trace their show to a conversation with Kelley in 2010 — two years before he died, also by suicide. This long gestation strengthens the show as a reasoned take on a topic in art history. But, in the process, there are themes it leaves out — surveillance, for example—that are ultra-germane to the stated topic and major preoccupations in contemporary art. The pair of Trevor Paglen photographs of CIA black sites in Afghanistan that are included in the show underscore this absence more than they alleviate it.

The museum is itself an archive. It invites — requires — the same kind of oblique forensics that the most striking works in this show apply to archives of their own. In a catalog essay, Eklund and Alteveer note that “conspiracy is rarely a career through line for artists,” who delve into it to varying degrees. Object by object, “Everything Is Connected” makes a strong demonstration of the ways in which art can inform, even guide, the analysis of power. As an assemblage, however, it turns into a litany, causing us to jump around between times, places, and topics — wars and terrorism and corruption and collective and personal traumas — in a way that flattens the subject matter, diminishing the sense of anxiety and emergency that drove these artists, sometimes to obsessive lengths, in the first place. With the exhibition’s intellectual success, as a contribution to art history and method, comes the cost of dulled political and material stakes. 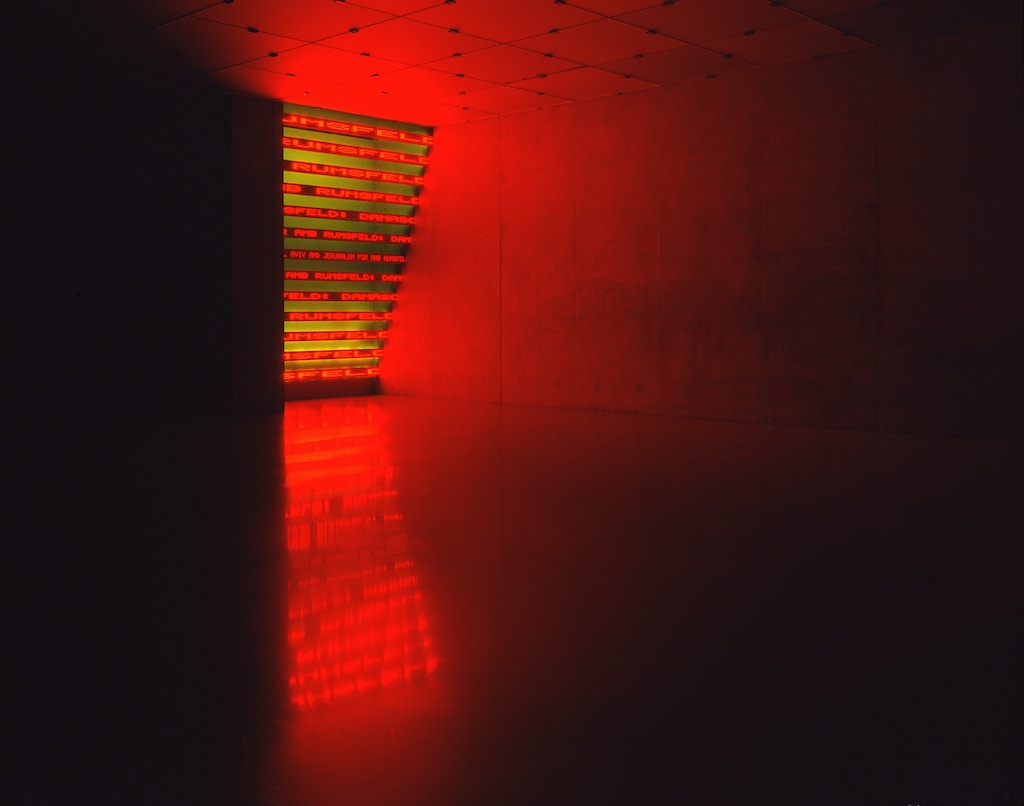 It takes an LED sculpture by Jenny Holzer, “Red Yellow Looming” (2004), to give the show the jolt it needs. Across 13 horizontal tickers runs text that Holzer excerpted from U.S. government documents on Iraq. Built into an alcove, the sculpture bathes the space in a red glow on one side, yellow on the other. Holzer described her move to LED tickers as “needing to be where people look.” Relentless, repetitive, anxious, her sculpture addresses us in the language of this moment, when the stakes are high and we must look — urgently.