Donald Trump’s attack on Christine Blasey Ford proves that he cares to serve only the minority of Americans who voted for him. 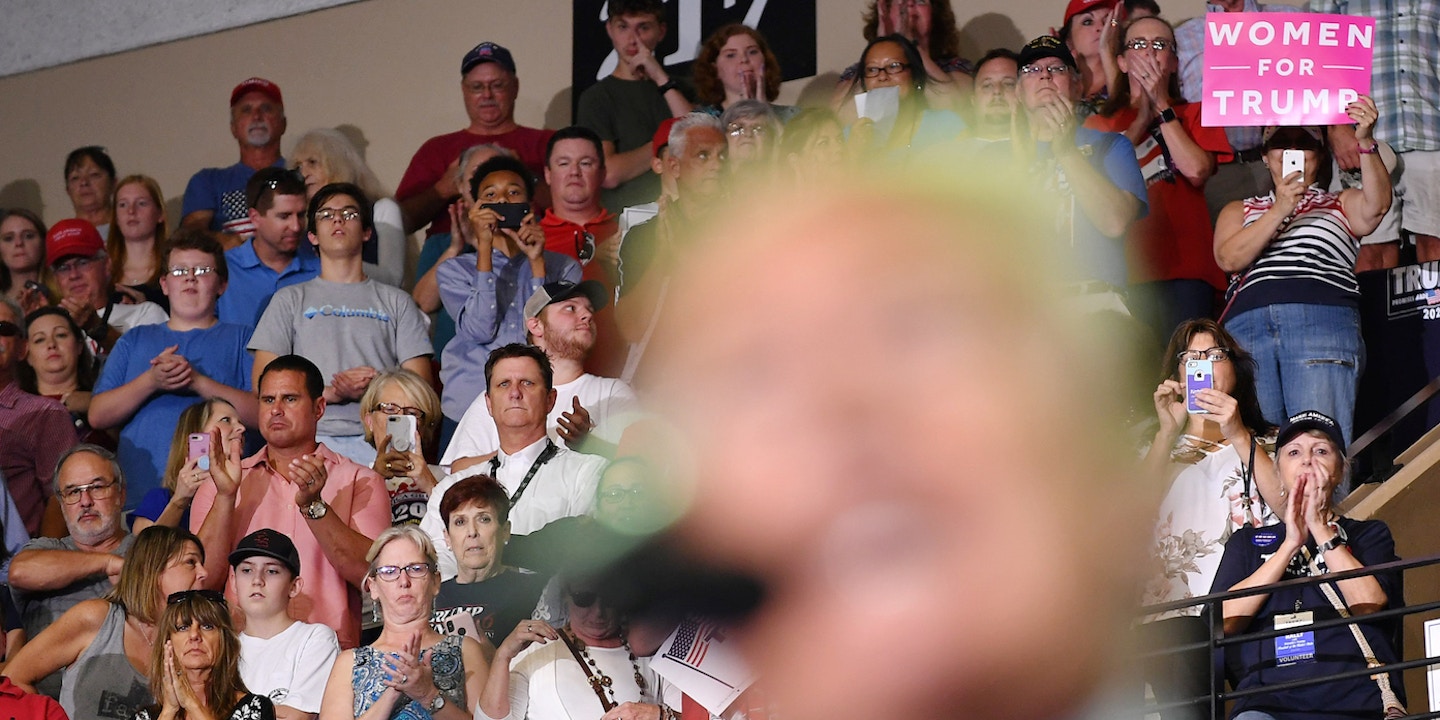 Standing behind a seal that identified him as the president of the United States, Donald Trump mocked and lied about the testimony of Christine Blasey Ford to a crowd of supporters in Mississippi on Tuesday night, making it clear that he cares to serve only the minority of Americans who voted for him.

Adopting the same insult-comic tone he once used to mock a disabled reporter who undercut his lie about mass celebrations among Arab-Americans on 9/11, Trump drew cheers from his base with a distorted account of Ford’s testimony, in which she accused Supreme Court nominee Brett Kavanaugh of sexually assaulting her when they were both in high school.

“Thirty-six years ago, this happened. ‘I had one beer,’ right? ‘I had one beer,’” Trump said, in a sarcastic re-enactment of Ford’s account, in which he falsely claimed that she recalled nothing but drinking.

At a White House news conference on Wednesday afternoon, Press Secretary Sarah Huckabee Sanders lied on Trump’s behalf, by denying that he had mocked Ford and insisting that his performance was just “the president stating facts.”

"The president was stating the facts," Sarah Sanders says of Pres. Trump mocking Dr. Ford, adding everything Kavanaugh has said has been picked apart, "yet if anybody says anything about the accusations that have been thrown against them, that's totally off-limits and outrageous" pic.twitter.com/jRAhDf4EmI

The comments by Trump, who has privately boasted about getting away with sexual assault, electrified not just his supporters in the hall — who chanted “We want Kavanaugh!” — but also fans on Reddit who see him as a fellow troll. One poster exulted: “Trump ‘mocks’ Christine Blasey Ford testimony at Mississippi rally crowd roars! EPIC! SHIT POSTER IN CHIEF!”

That Reddit comment was posted by a Trump supporter using the name “MUH HIPPOCAMPUS,” a mocking reference to Ford’s use of the technical term for the part of the brain where memories are encoded during her testimony. When Sen. Patrick Leahy, D-Vt., asked Ford what she could not forget about the assault, she replied: “Indelible in the hippocampus is the laughter — the uproarious laughter between the two, and their having fun at my expense.”

Christine Blasey Ford testifies on what she remembers most vividly from the alleged assault: "Indelible in the hippocampus is the laughter. The uproarious laughter between the two and their having fun at my expense... I was, you know, underneath one of them while the two laughed" pic.twitter.com/2HZtC27RhU

As Trump and his fans had fun at Ford’s expense in a Mississippi county where he won two-thirds of the vote in 2016, her words reverberated in the minds of many Americans he no longer even pretends to care about.

"indelible in the hippocampus is the laughter"https://t.co/JarWNv5FoK

Watching a sexual predator mock a survivor — and watching a crowd of people laugh with him — is too much for anyone with a conscience to ignore.

Get mad. Get to DC. And get these men out of power for good.https://t.co/TzsfwyqCtv

We can get mad at this. Tweet up a storm. Call him names. All those things. Or - we can do the only thing that really matters. Vote. Them. Out. November 6. Midterms. Diminish his power. Batter his ego. Raise your voice. Show them all who’s boss. Justice and dignity will prevail. https://t.co/k5M5vIJx3l

Another part of Trump’s speech at the campaign rally offered a clue that he is speaking only to that portion of Americans hermetically sealed inside the same bubble of partisan disinformation as their president. Seeking to smear the senator who had elicited that moving reply from Ford, Trump referred to false innuendo that Leahy has a drinking problem — scraped from the far-right reaches of the internet — as a matter of proven fact.

President Trump: "Patrick Leahy, oh he's never had a drink in his life... 'How dare you have a beer while you're in high school?'" pic.twitter.com/yyKYrSY5XW

The claim, which Trump said could be verified by searching for “Patrick Leahy slash drink,” initially baffled Washington journalists who heard it.

He's suggesting that many Democrats having drinking problems. Says look up "Patrick Leahy-slash-drink" and repeats, "Patrick Leahy-dash-drink."
FWIW -- In 3+ decades watching Congress, I've never heard a hint of such talk about Leahy.

As Miles Parks of NPR noted, a Google search conducted as Trump spoke turned up no such allegation.

Trump just begged the crowd at his rally in Mississippi to internet search "Patrick Leahy and drink" so I did? I'm confused pic.twitter.com/J1ceCZzu7Q

That’s because the place to look is not Google, which draws on thousands of impartial news organizations, but those precincts of Reddit inhabited by Trump’s base. Within minutes of Trump’s public search request, one of his supporters on r/The_Donald, a popular pro-Trump subreddit, found and posted audio from 2010 in which the far-right shock jock Mark Levin claimed without evidence that Leahy’s manner of speaking was proof that he was drunk while giving a speech on the Senate floor.

Trump’s confident assertion of a falsehood, along with a call for his fans to “check it out,” uncannily echoes the praise of George W. Bush offered by Stephen Colbert, speaking in character as a right-wing pundit at the 2006 White House Correspondents Dinner. “We go straight from the gut. Right, sir?” Colbert asked Bush, who would nominate Kavanaugh, his then-aide, to the federal bench three months later. “That’s where the truth lies, right down here in the gut. Do you know you have more nerve endings in your gut than you have in your head? You can look it up. Now, I know some of you are going to say, ‘I did look it up, and that’s not true.’ That’s ’cause you looked it up in a book. Next time, look it up in your gut.”

Top Photo: The president of the United States, Donald Trump, addressed the faithful during a “Make America Great Again” rally in Southaven, Miss., on Tuesday night.